Nanatsu no Taizai: Revival of the Commandments – 22 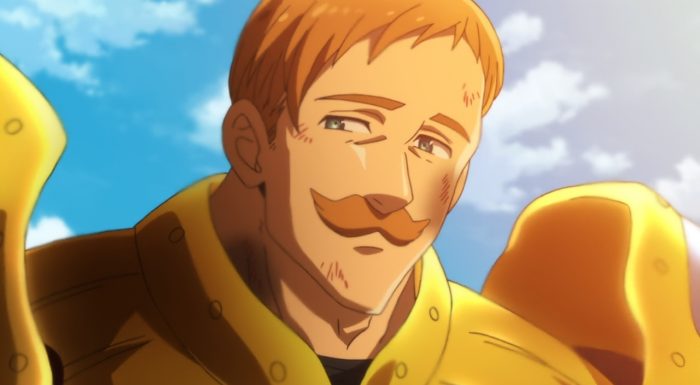 This episode sure felt packed and yet it still felt rather satisfying to watch. We got to see the big showdown between Escanor and Estarossa, the appearance of a member of the goddess clan, and the revival of Meliodas. Just a few minor things really XD. I enjoyed it from start to finish. They just started strong with the Escanor fight and honestly that guy is just purely entertaining. It can be tough at times to make an incredibly powerful character likable, but they managed it just fine with this show. The episode itself flowed along nicely though going from the entertaining fight, to a dangerous situation for the main cast, to a glorious finale. Considering how powerful the Commandments are, it is nice to see Meliodas back to help the cast out. 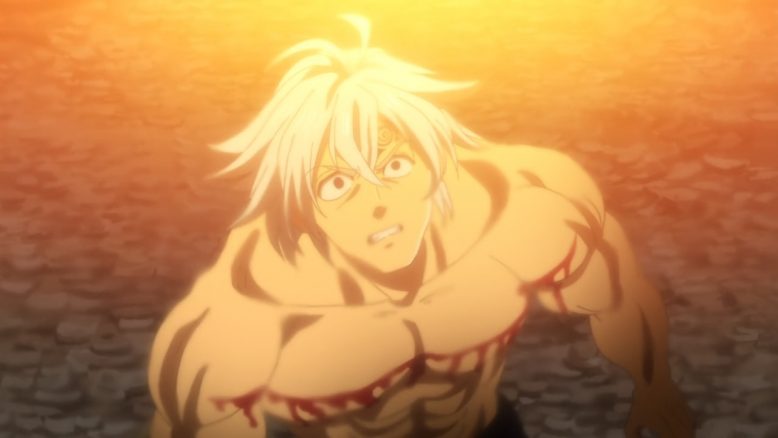 Well he just screwed up

On some level I don’t get why the Commandments didn’t retreat in this episode. They outright detected Estarossa and Zeldris getting blown away by Escanor. They could detect something happened to them and yet just stayed on the attack? Shouldn’t they be worried a bit about what was going to happen to them if that guy came back? Oh sure we know he can’t just immediately return because he’s giving off so much heat that he’d kill his own allies, but I’m not sure they know that. Shouldn’t all available Commandments come together to try and take down Escanor? I get demons also have a high sense of pride, but there has to be some sense of self preservation. Or maybe they just don’t think anyone besides Meliodas (a fellow demon) could be a threat requiring all of them joining forces. 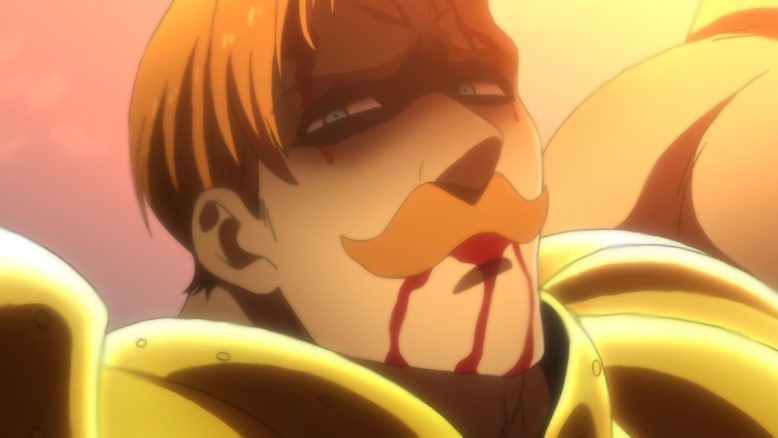 The fight was great though. Give Estarossa credit, he does have quite a bit of power. This guy isn’t some pushover. That is a pretty broken combination when you put together incredible strength, powerful counter magic, and a dangerous commandment. But luckily for the Sins, Escanor is just as broken if not more so. His magic isn’t something that can be easily overcome, his durability can take his own strength being countered, and heck he appears able to still deliver physical damage even with full counter being used against him. This guy is an awesome badass who is utterly proud of his abilities. I love how the best Zeldris could do…was basically get blown away with Estarossa. The only person who decides who wins or loses is Escanor. These guys challenged him around noon…they deserved to get annihilated. 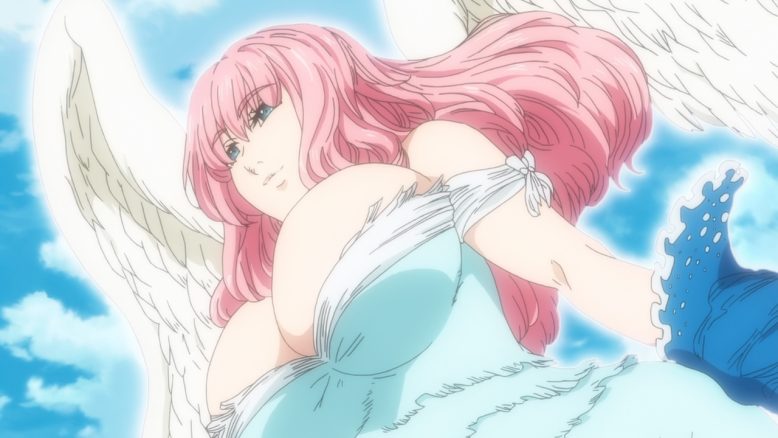 I do love how utterly pathetic the goddess clan is and how pointless it was to put faith in them. Still, I feel bad for Denzel. The guy honestly believed that a day would come that he’d have to rely on the goddess clan to save them. He was prepared to sacrifice his life to protect those he cared about and to fulfill his duty as a knight. Heck the guy lived his life honorably for years without relying on that suicidal move. Finally that day came and he was ready to give everything he had. And what does he get for that? A coward that saw the Commandments and said “forget this I’m gone!”

What exactly did this goddess think Denzel would summon her for? Hunting boars maybe? Yeah I get these guys are above this goddess. The Goddess clan must have tiers like the demons and this is like having a mid-tier demon fighting a top tier goddess. But come on! A person gave their life and you are just going to run away? The show does play into the idea that goddesses and demons probably aren’t that different. We just get a minor point made about slaughter and hostages, which does point towards the goddesses being just as much to blame in that war as the demons if not more so. The fact that they tried to get Ban to kill Meliodas (someone who apparently betrayed the demon clan) kind of already implied their scumbag status. 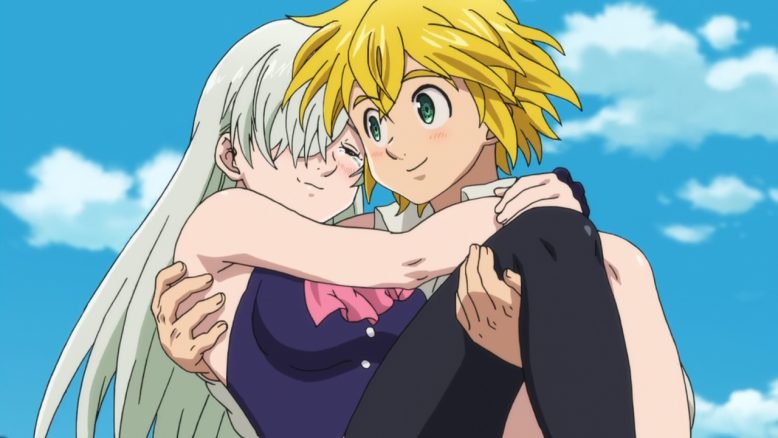 And hey Meliodas has returned! I guess he managed to settle things with his ‘father’ in purgatory. I do appreciate how the show at least makes immortality something not openly positive. Ban has had a difficult time not being able to get to see Elaine in the afterlife and Meliodas has been forced to stay alive past a point that he wanted to be. And honestly it seems like either one of them could be killed permanently by their souls being eaten. Their bodies may recover (Ban’s much faster than Meliodas), but neither likely has immortal souls that can’t be damaged or consumed. And we’ll have to see how Meliodas is feeling after his return. Sure he did damage upon his return, but it was an ambush scenario. 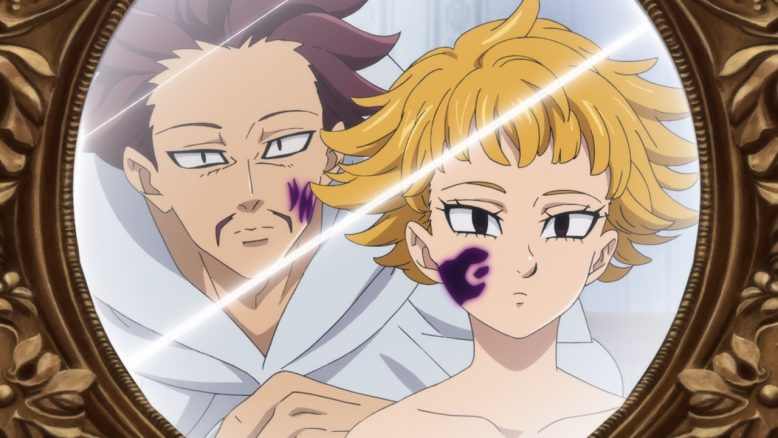 Things are going to continue being interesting right until the last episode. We’ll have to see if Escanor can cool down fast enough to go and support his allies and Meliodas might have his hands full with Derieri and Monspeet. And there is the interesting obsession that Derieri had with Elizabeth. I’m sure Meliodas will keep her good and safe, but it is odd to see a demon thousands of years old being obsessed with this Princess from Liones. There aren’t many episodes left, but I’m sure things will continue being entertaining until this season is over. Here’s hoping that they end on a strong note and we get future seasons down the road.