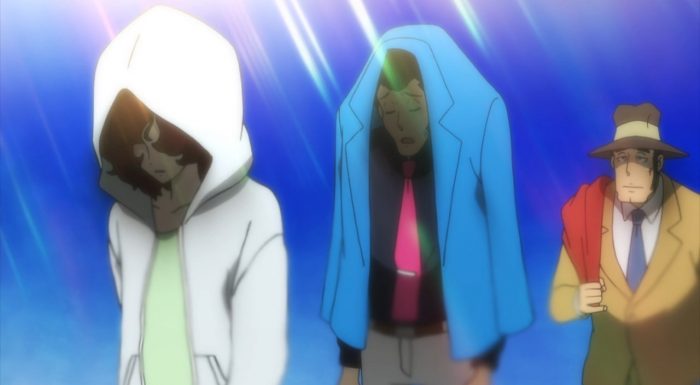 Another week, another solid offering from Lupin III Part 5. At this point, its more or less certain that these past episodes from the series haven’t been any kind of a fluke. We’re in for a pretty wild ride with Lupin III series. That fact does many things: It makes Lupin III Part 5 an actual joy to behold,  it drums up excitement, brings us to new places, and ultimately, also makes writing about this show both an easy and difficult at the same time.

When a series is just plain good, its easy to gush, and I fear that this week is going to be another week of pure fanboyism and gushing. I mean, if nothing else, Its clear now that Lupin III Part 5 is at the very least, deeply interested in reexamining all the character relationships that we’ve seen become a staple throughout the various Lupin III incarnations over the years. While last week had us examining Lupin himself a bit, and gave us a few hints at a potential new take on the Lupin/Fujiko dynamic, this week took a break from all of that and instead focused on another important character; Inspector Zenigata. 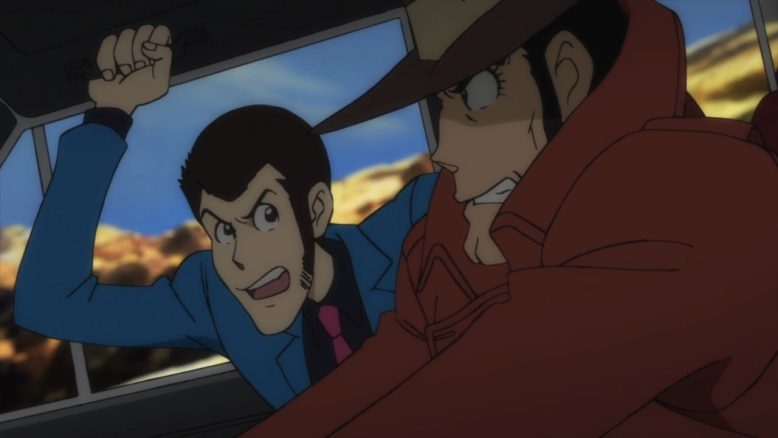 What’s interesting here, is that I think 2015’s Lupin III series actually did a fantastic episode examining the cat and mouse chase between Lupin and Zenigata. That series gave us a theoretical take on one particular ending to the whole chase, and just how far both characters are willing to go in order to beat one another. While this week’s examination isn’t quite so deep or dramatic, there’s some nice little nuggets here that definitely reveal some new stuff.

The twist this week, the little spin that the show added to the classic dynamic, was in actually showing a more friendly, collaborative set of moments between Zenigata and Lupin. After saving Lupin and Ami from Fujiko, Zenigata then proceeded to escort them across a desert to the border. The setup here is smart, because if there’s one thing we’ve seen even more than the Fujiko and Lupin dance, its the constant chase that Zenigata often gives Lupin. The chase itself doesn’t do Zenigata any favors either, since he’s always kind of portrayed as some obsessed, crazy and hyper active stalker that just follows Lupin around everywhere and almost never succeeds. 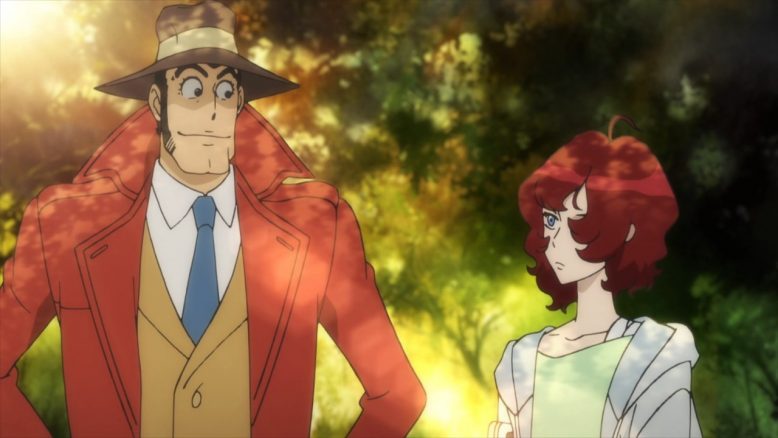 Thankfully, this week’s portrayal of Zenigata is a lot more calm and subtle. Sure, he rescues Lupin and Ami from Fujiko only because he’s out to arrest Lupin after they cross the border, but there’s less of that crazy and insane Zenigata here, and more of an actual decent human being. Zenigata treats Lupin with care and respect here, and while he quite plainly lays out his motivations, he acts more of like a buddy than a clear enemy. There’s no machinations of an unholy alliance, or the whole “the enemy of my enemy is my friend” stuff going on here.

Instead, we get to something that I think the franchise has always subtly alluded to before; the mutual respect that both Lupin and Zenigata have for one another. The previous films and shows have always hinted at this idea, or at least acknowledged it, but in every case, Zenigata’s been so balls to the walls insane that its never quite felt earned or realistic. This week, however, Zenigata and Lupin basically put aside their differences, trust one another and move through the desert with Ami in tow as comrades. 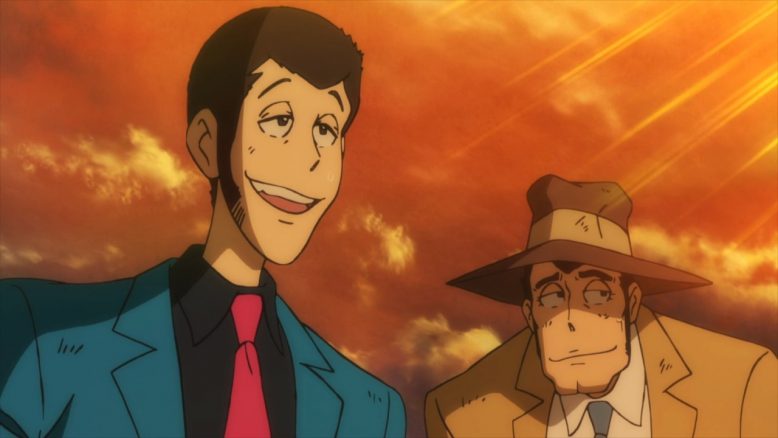 There’s a feeling here that’s reminiscent of long time coworkers getting together for a job, more so than a cop and a theif working together. In a welcome change of pace, Zenigata doesn’t feel the need to cuff Lupin nor does Lupin feel the need to give Zenigata the run around. No, the two of them have been at this long enough that the actual antics between them have kinda cooled off as a result.

And man, does that add a dimension of realism to their dynamic. I mean, after all those years of going head to head against one another, you’d thinkthat the fire and the energy would tone down a little bit between them. Not only would it tone down, but it would have to have the two of them mature a bit. That obviously all is present here, and the change in interaction between Zenigata and Lupin this week, simply lays out the simple fact: Zenigata isn’t there as a Police Officer, he’s there as a friend. 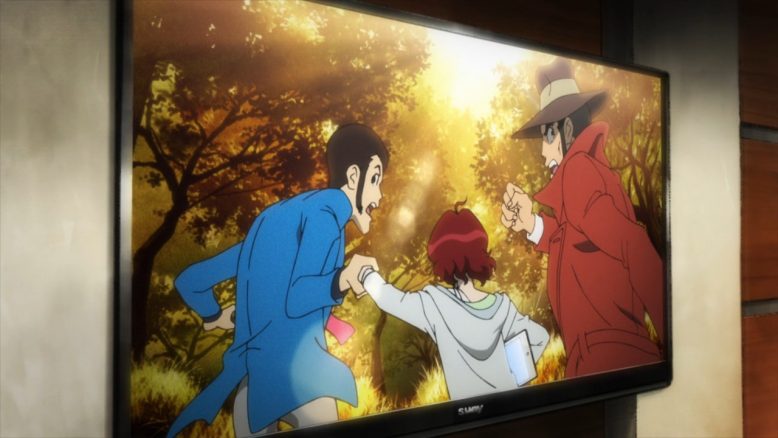 That realization, that bomb shell, isn’t outright spelled out by the episode. Instead, the show, like the episode before, encourages viewers to dig deep and unravel what its trying to say here. It does that, by “showing” rather than telling. Lupin and Zenigata’s relationship is a complex one, and one where they’ve developed a mutual respect, trust and admiration for one another despite being on opposite sides of the law.

And of course, with Ami added into the mix, there’s a third element that brilliantly meshes into it all. Ami once again, asks the direct questions and even goes as far as to literally throw the whole “You’re Lupin’s friend aren’t you?”. Its s spectacular use of this new character, who’s not only poking and prodding at questions that have long been put to the side, but who’s actively pushing these classic characters in interesting ways. 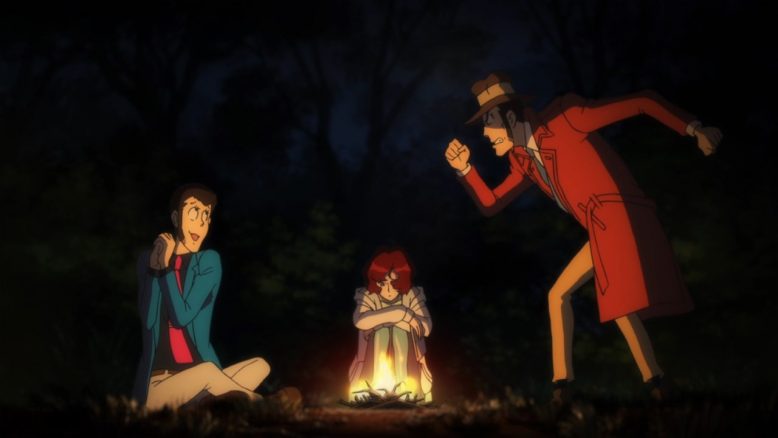 Whether its Ami’s more straightforward question about friendship, or the unintended joke about a love affair between Zenigata and Lupin, its all done exceedingly well. The reactions to those questions are just as awesome, with each character in turn, reacting to them, in their own lovable way. While Zenigata shyly denies the friendship thing in a “manly man way”, and is outright disturbed by the romance assertion, Lupin just goes all into the joke, in the most hilarious way possible.

Of course, while the bulk of the episode focuses in on Lupin and Zenigata’s unique relationship, there is one other thing that’s done exceedingly well. That thing, is Ami’s own character development, which takes significant strides this week. See, it would’ve been easy to just have Ami continue to be the stoic, bookish nerd whose perspective never grows and just have her continue to ask weird questions. Easy yes, but that would’ve also just reduced Ami to nothing more than a plot device, and if there’s one thing this week cements, its that Ami is no plot device. 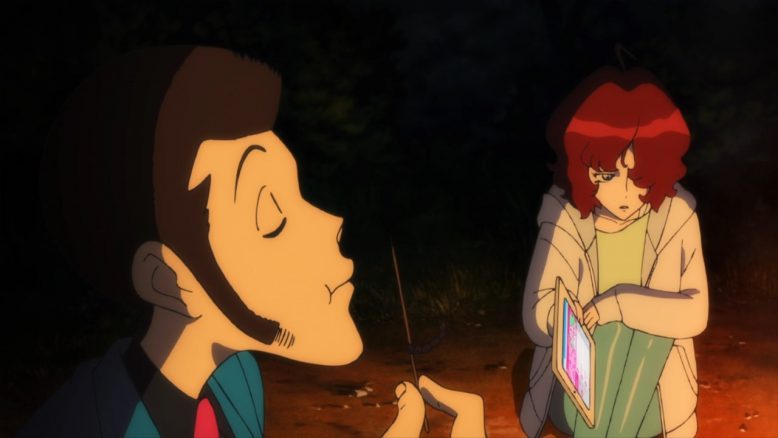 There’s a question, one that Lupin asks Ami during that whole camp fire scene where she then prods both him and Zenigata about their relationship. Its a simple “What do you think about the outside world?”, to which Ami gives a pretty generic, standard response. To her, the outside world is problematic, and there’s no real need to be in it at all when there’s technology that provides information and even friendship at your finger tips from the comfort of your own home.

Its the sort of misguided notion that you’d expect from a shut-in character like Ami, and if this were a lesser show, that would’ve been in the end of it. Fortunately, as we shift from the more contemplative parts of the episode to the action scenes, we see Ami multiple times smile and laugh after she overcomes danger. There’s a thrill, an experience of really being alive that she gets from being outside, from staring death in the face. 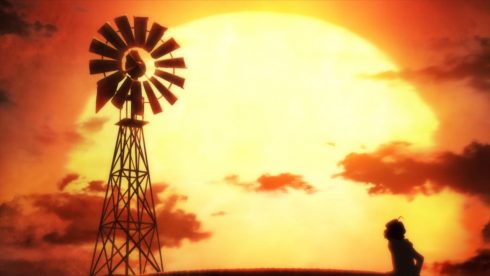 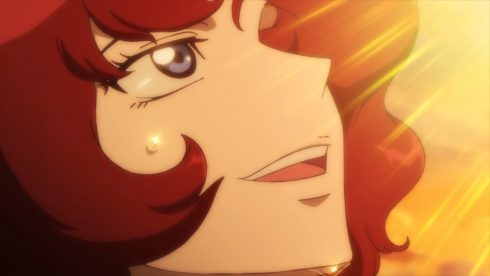 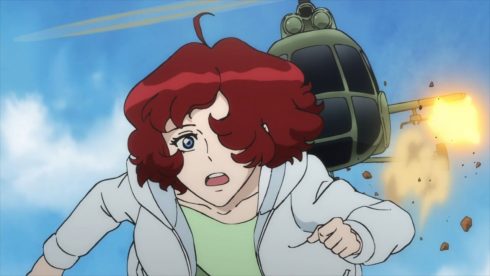 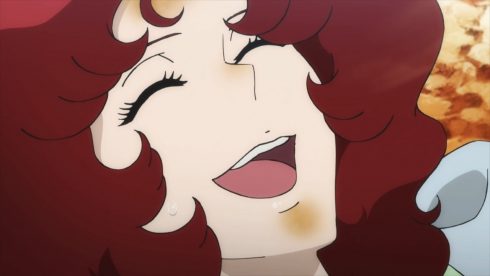 By the end of the episode, Ami knows. She knows that there’s more to life and the world then simply reading about it. She experiences first hand, the satisfaction of living, of facing danger and coming out on top and surviving. Her efforts lead to a sense of joy and fulfillment that shows her how darn wrong she’s been. Ami changes and matures as a character, and once again, the show does this brilliantly by SHOWING us Ami’s laughs and smiles (something we haven’t seen from her until now) and uses them to make its point.

Look, I’ll openly admit that I’m really leaning on the whole “Show, Don’t tell” concept of visual storytelling, but I just can’t help it. Lupin III Part 5 is such an expert of example of that concept at play, and does it so well, that I just can’t, not praise the show for it. Sure, its as classic of a technique as techniques go, but its one that seems to allude a lot of anime directors and visual storytellers these days. 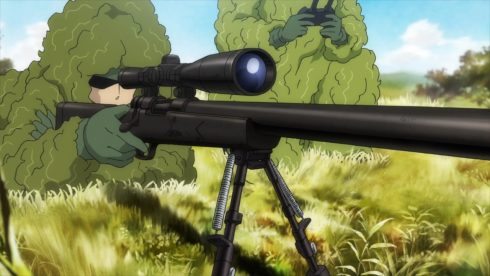 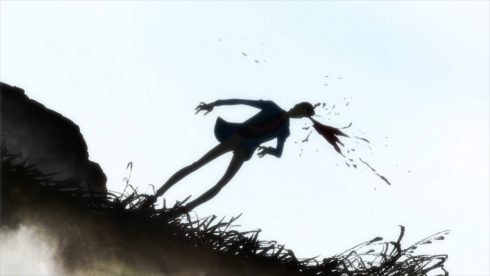 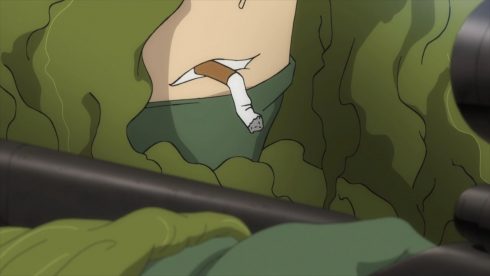 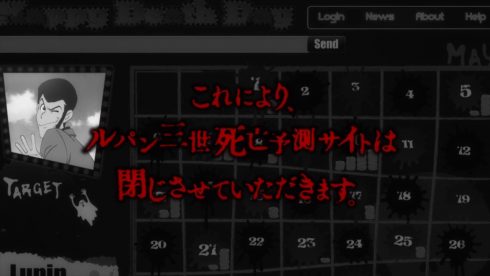 Now… Speaking of classic concepts, this week’s episode once again ends on a pretty interesting cliffhanger, one that shows us Lupin getting shot square in the head. Is Lupin did? Hell no. Anyone who believes that, is is in for a pretty rude and quick awakening come next week. There’s a nice little moment in the episode, one that’s easy to miss, where the sniper in question actually has a cigarette in his mouth. A cigarette like the one that’s often found with a certain Lupin associate and friend (Jigen).

So, since we know that Jigen’s the one who took the shot, we therefore, know that this is all part of Lupin’s master plan. Which makes sense, because even though Lupin has been able to get to the border with Zenigata’s help, the Lupin Death Game site is still active and sending assassins his way. What better way to take that particular problem out of the equation, then to actually bet on his own death himself and then fake it? 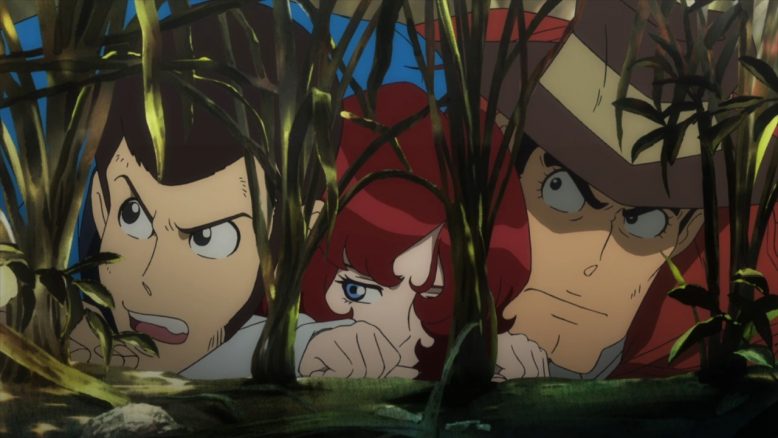 Given that the show’s already let that particular cat out of the bag, I’m assuming the next episode will have something else as its major crux. Which, honestly is exciting and impressive. Its ballsy for a show to just show you its cards beforehand, touting that its STILL going to entertain and surprise you regardless.

Normally… I’d be vary and even a bit skeptic after what we saw at the end of this episode. Normally sure, but Lupin III Part 5 has given me four excellent episodes in a row, so it not only has my trust but my attention. I can’t wait to see what the show has got planned next, and I’m pretty sure its at the very least, going to be good.