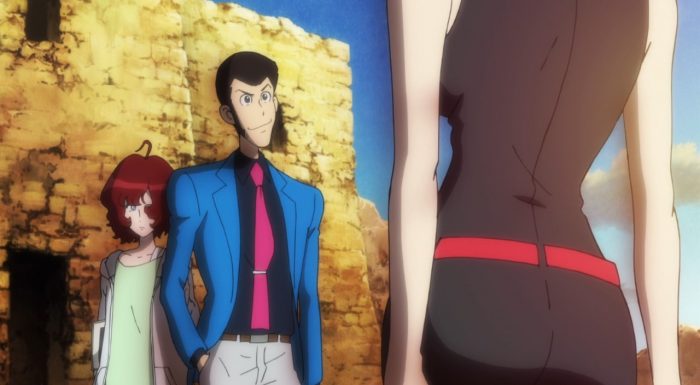 There’s no two ways about it, this latest incarnation of Lupin III is good, darn good. If 2015’s Lupin III series was both the revival and arrival of the franchise in the modern era, then 2018’s series is all about taking the franchise’s characters and the story into new and interesting albeit logical directions. Its easy to over extend when trying to inject freshness into a long running franchise, and its equally easy to not extend far enough. Lupin III Part 5, however, goes just the right distance to be darn interesting while being very respectful of what’s come before. 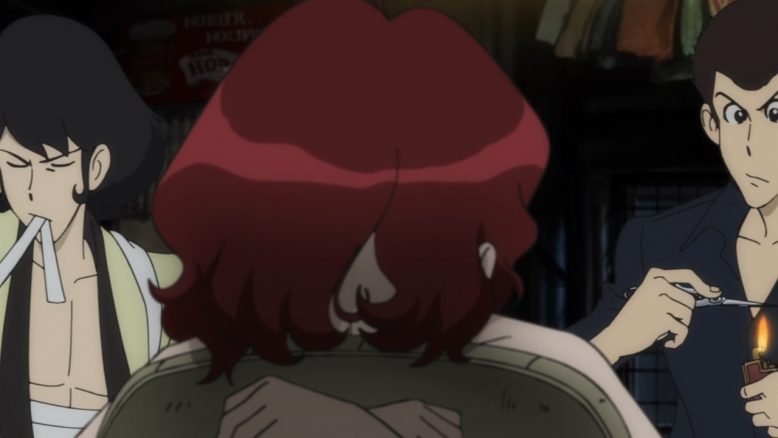 At the center of this tight balance of change and preservation, are most certainly the characters themselves. What I find so striking about Lupin III Part 5 is how Lupin himself feels a bit, older, wiser and a lot more contemplative than we’ve ever seen him. I mentioned last week that I loved the dynamic between him and Ami, but man, we had barely scratched the surface then. This week, really gave us the true value of the direct, cold and clueless Ami. Ami, is a person that just isn’t constrained by social norms, or by pride or by any sense of shame, she cuts straight to the point and seeks the answers to any questions that she’s curious about.

Which, is cool and all, and makes for some entertaining banter and what not, but the true genius in Ami’s interactions with Lupin is in how they tell us something new about the franchise’s protagonist. Until this point, we’ve seen Lupin interact with many colorful characters, but none of them have actually asked him the hard hitting questions. Why does he do what he does? Why doesn’t he just retire? What is the purpose of his obsession with women and sex? Those are some important questions, and they’re questions that we’ve never had answers to. So its no surpise that there’s a sense of great satisfaction this week, when Lupin actually takes the time to answer them. 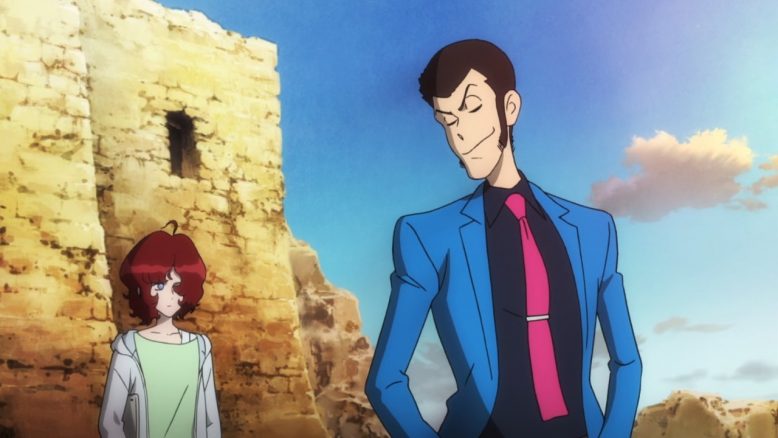 Surprisingly, rather than give Ami the run around as he usually does, Lupin takes a moment, closes his eyes and lets out a thought provoking answer to every one of her questions. And it says something, when this exchange between Lupin and Ami is the highlight of the episode, rather than the big battle royale between Team Lupin and all the assassins that he lures into the old ruins of an abandoned city in the desert.

Sure, the action is fun here, and Lupin’s plan is his signature level of clever and entertaining, but the purpose of the gun play, the slashing and shoot outs is clear; its nothing more than a change of pace. Each one of Lupin’s big self reflective answers are spaced out by a moment where He, Jigen or Goemon act exceedingly badass and take out one of the many killers sent to take them out. Which, IMO, is the best use of action in entertainment. A story that uses action as a seasoning, something to cause excitement and vary things up, is a story that knows what its doing. 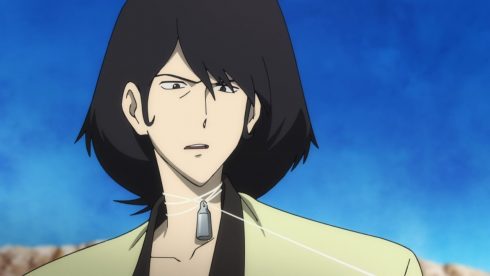 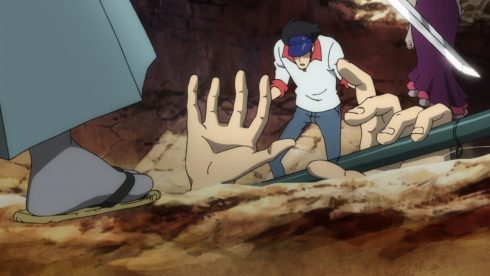 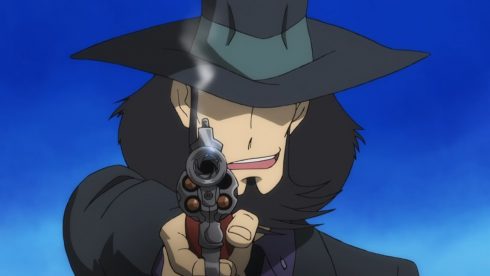 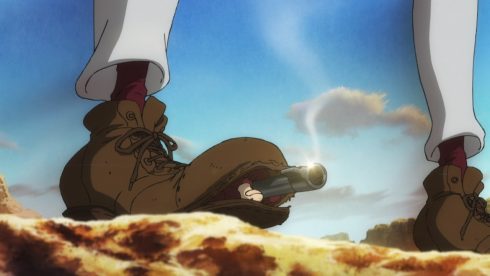 Thankfully, even if taken on its own, the action on display is just well done. Whether its Jigen shooting the hammer of the “invisible revolver” clean off, or Goemon slicing off the hands of his opponent, or Lupin using a small gun in his shoe, all the conclusive encounters in the episode are just great, unexpected and expertly crafted. There’s nothing predictable about any encounter, and its something that this series has manage to do for three episodes straight, now.

Now… Getting back to the Lupin and Ami stuff, I have to say, I really did find the answers that Lupin gave Ami quite intriguing. The first of her questions is an obvious one; Why does Lupin not retire? He’s probably made enough money and has enough of a skill with disguises to pretty much vanish and enjoy the rest of his life. Its a pretty obvious question, and one that I think the audience regularly ignores in order to keep the fantasy of Lupin III going. But there is a reason behind Lupin’s continuous escapades, as he quite aptly reveals. To paraphrase, Lupin believes that a man needs a challenge, an obstacle to overcome in order for life to remain interesting. Lupin’s skills and abilities are kind of meaningless if he can’t actually use them on something worthwhile. And with that, comes a little look into just how dangerous and broken of a life Lupin really leads. 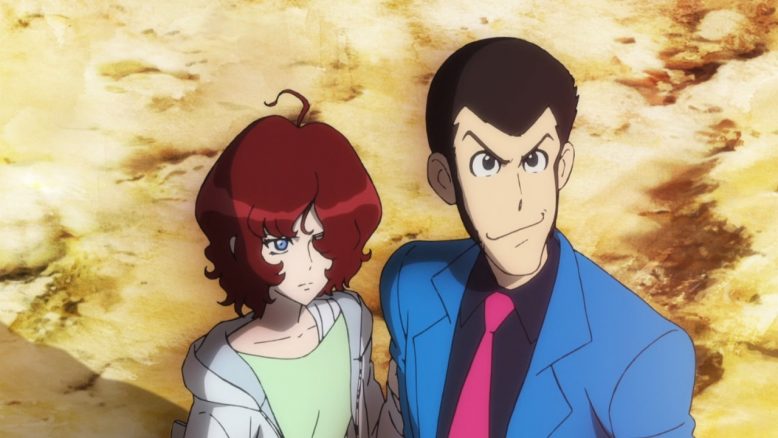 Someone constantly putting himself in danger, for the thrill of it, always upping the stakes and making it harder to survive, well… There’s only one end in sight for someone like that. There’s no happy ending down this path that Lupin’s taking, and in a rather elegant use of “show, don’t tell”, the episode shows that Lupin is full aware of the reality. Hos slow, almost resigned expressions, the change in tone when he speaks, it shows that while Lupin may very well be satisfying a thrill addiction here, he’s not unaware of what it is he’s eventually in for. He’s not hiding from the consequences and eventual result of his constant life of challenges and danger. Lupin isn’t sad when he lays all the facts down, but he’s certainly not as energetic as he usually is, and that says something, in a way that words or standard dialogue never could.

That level of character work, in a Lupin III show, is unheard of. As a huge fan familiar with this franchise, I was pretty darn blown away by how deep and smart the writing was this week. I mean, tbere’s little bread crumbs here and there that just expertly direct the viewer to draw these conclusions. All the talk of reality, of survivng in the real world, its brilliantly all pointing and cluing the audience towards the truth, should they care to dig deep enough. 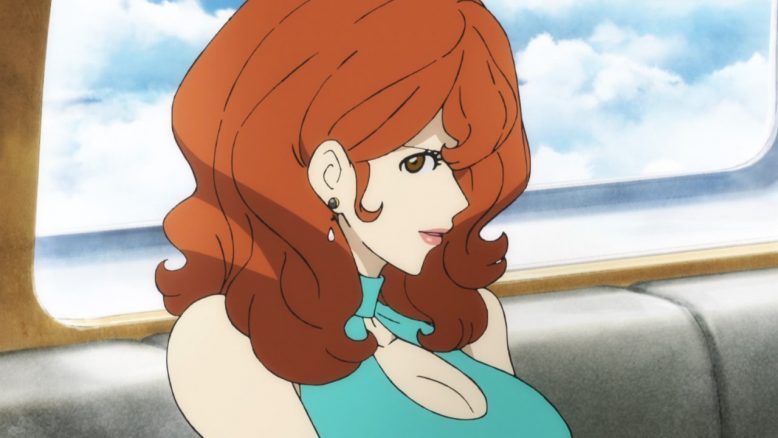 Of course, if the realization that Lupin himself is fully aware of his thrill ride not being sustainable wasn’t explosive enough, Ami turns to the next big thing that I think the Lupin III franchise has never properly addressed or explored; Lupin’s fascination with Mine Fujiko.

Fujiko is a complex character, and my feelings on her are equally so, complex. The whole “Lupin III chases after Fujiko but never gets her” was charming the first 10 or so times I saw it, but by 2015, I was more or less ready to move on here. Look I get that Fujiko has that endearing mysterious quality, and that she’s the unattainable woman. Lupin can’t have her and thus can’t help but chase her. I get the idea, but… At some point, even Lupin needs to either succeed or move on. We’ve seen Lupin cut his losses multiple times with other women, but Fujiko for some reason, has always been a mainstay obsession for him throughout the years. 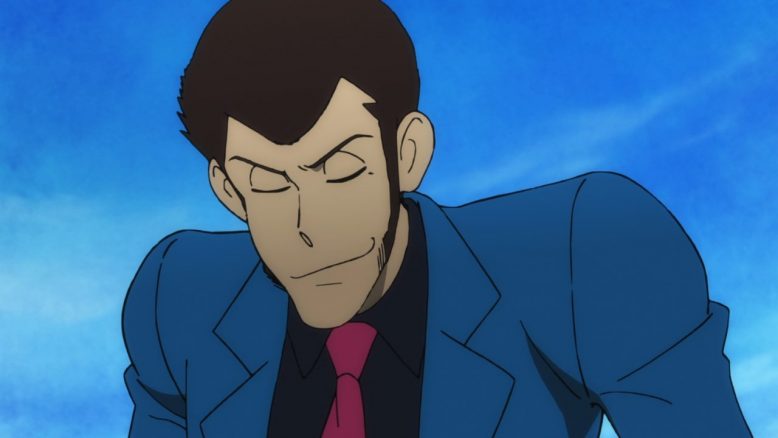 Personally? I’ve found that Fujiko’s gone from being an interesting albeit trite stereotype of a character, to a bit of an annoyance. I remember actively groaning every time I saw her in the last series, and was actively shipping Lupin and Rebecca because it just made sense. Rebecca and Lupin had chemistry, and Rebecca actually was interested. Fujiko? Outside of that one episode where she got jealous, has never really shown actual care and affection for Lupin. So, let me be honest and say that I was actually kind miffed when I saw Fujiko featured so heavily in both the Opening and Ending credits for the show.

“Not this again.” is the phrase that came up. Fortunately, just like how the 2015 series added an extra layer of depth to Zenigata and Lupin’s relationship, so too is this 2018 series exploring Fujiko and Lupin. 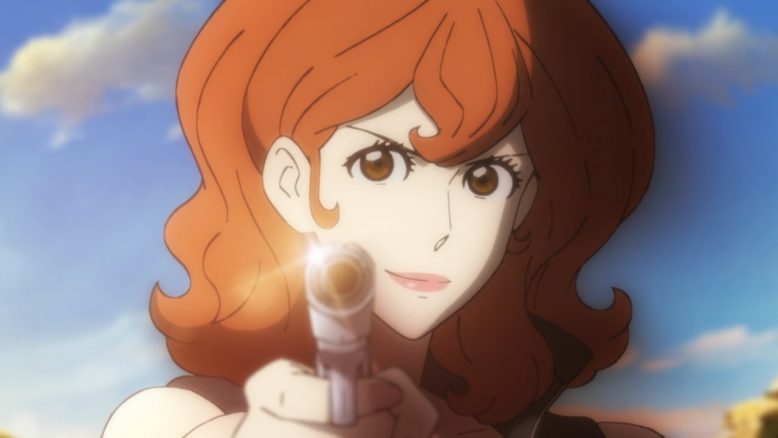 The whole angle, of Lupin and Fujiko having actually parted ways, was just… Wow. I can’t say I ever saw it coming. I never expected, or even dared hope that this particular dynamic between these two character would ever change. In some ways, its almost sacrilege messing with this particular aspect of the franchise, but in other, more important ways, it definitely needed to be done. Lupin not jumping up for joy at the mere mention of Fujiko’s name, Lupin actively sighing and even feeling a bit mellow at the mention of his old flame? You can’t tell THAT, isn’t interesting.

I mean… It was actually by the end of the episode, when Lupin and co basically dispatched all the assassins and what not, that my excitement was at its maximum. Why? Well because of the whole Fujiko thing, obviously. Fujiko and Lupin had parted ways! Not only that but there was some unknown story with regards to a wedding. Why had that lead to the two of them basically moving on with their lives? WHAT was it, and just how will the two of these characters act moving forward? 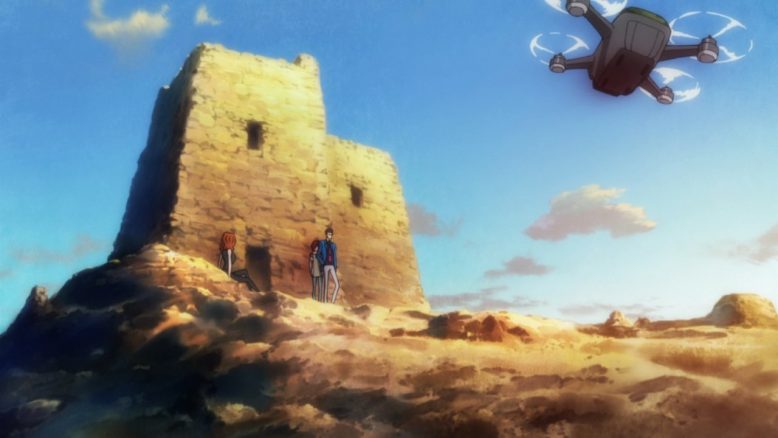 These are the burning questions, and they’re questions that feel natural and logical. I’m not sure if the show will actually give up on this particular status quo eventually, or if we’re actually going to see a permanent change here, but damn if the show hasn’t set it all up nicely. Even if Lupin and Fujiko do indeed settle back into their old dynamic (I hope not!), at the very least there’s an interesting story here, a situation that led to Lupin at least temporarily giving up the chase. And Fujiko herself? Despite their shared history, she’s actively gunning for Lupin’s death, something that we’ve never seen her do in the franchise’s long history. She’s double crossed him, used him, but honest and direct hostility that Fujiko exuded this episode? Its new, its fresh and its super interesting.

In closing, I’d like to say that at episode three, I believe that we’ve seen one of the best Lupin III setup episodes ever. I love how the show is daring to take risks and mess with franchise tropes, but doing so without completely rewriting everything (ala A woman called Fujiko). I confess that I’ve never had such a darn good time with Lupin III, and I never expected to be THIS deep down the rabbit hole. It may have come as a surprise, but man am I glad that we got this latest series of Lupin III. A series that certainly has the potential to be remembered for a long time. by both fans and onlookers.