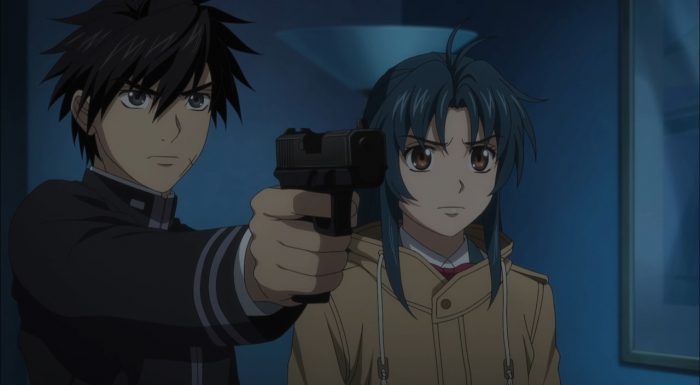 Honestly that was about as good a first episode as I could have asked for with this show. It has been a very long time coming in getting Full Metal Panic to return in anime form. The Second Raid came out back in 2005. So it really is kind of refreshing to see these characters again. Obviously this is not continuing directly from the end of that season. Rather we are presumably covering the material at the very end of the source material. You get the feeling of things ramping up to a conclusion with this season. And yet while you can feel we’ve missed some things, we can still basically grasp what is going on and where these characters have been. The show looked, sounded, and felt like Full Metal Panic for me. 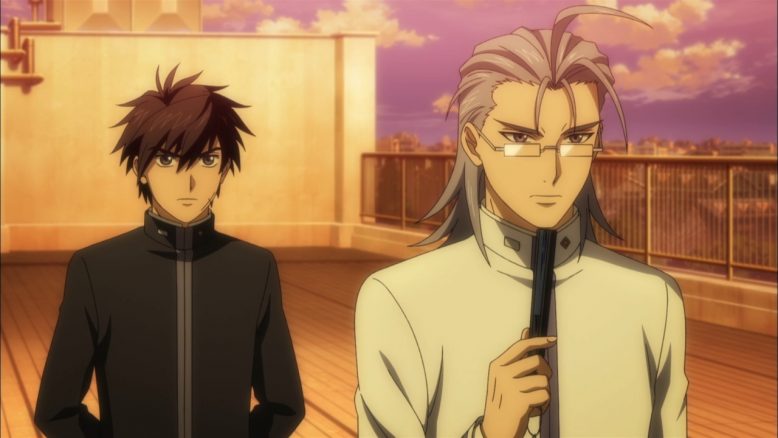 The graduation of the student council president and the discussion with him felt right. Even though this was the first time I’ve met this character as far as I can remember XD. This episode in a sense feels like the show grasping the issues and problems facing Sousuke and Chidori. While I can understand Sousuke and Chidori loving being in that school and the normal life they have available to them…there are issues. Sousuke himself has toned down his insanity in school, but the threats around them continue to pile up. It is a fair point to say that people are going to notice that it is Chidori that the core of these incidents. This president is a sharp cookie. He’s noticed quite a bit and knows that Chidori is special. I wasn’t sure if he was a good guy or a villain XD. He may still be either.

But while they may love the normal life at that school, it may not be a real option for them. It’s an age of the internet. Honestly, people more important than a student council president will start noticing things. I liked building up to Sousuke really considering running away with Chidori. That may be an option they have to consider. Right now they are exposed and their stay at this stopping point of high school may have to end sooner or later. 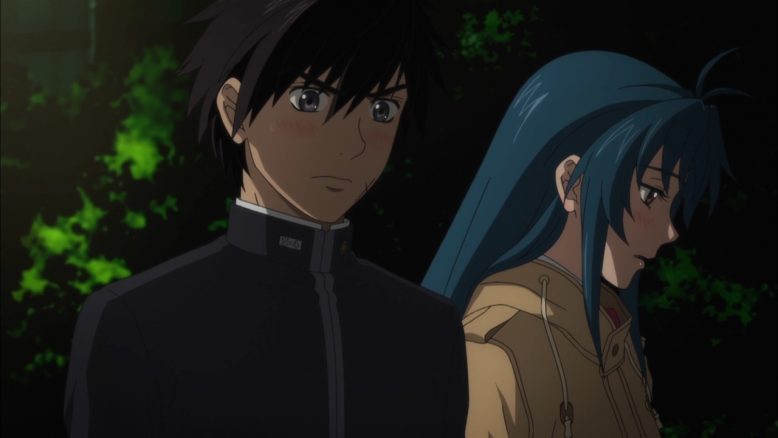 What I really liked was seeing how much growth has gone on with these two. Sousuke and Chidori have been through some tough experiences in their lives. Even just with the anime material we have they’ve been through a lot and grown to care more about each other. Still, it felt like a legitimately large step for them to walk home holding hands. Sousuke is growing and pushing a bit more when it comes to his own feelings. With Kaname being a classic tsundere he does have to push a bit. 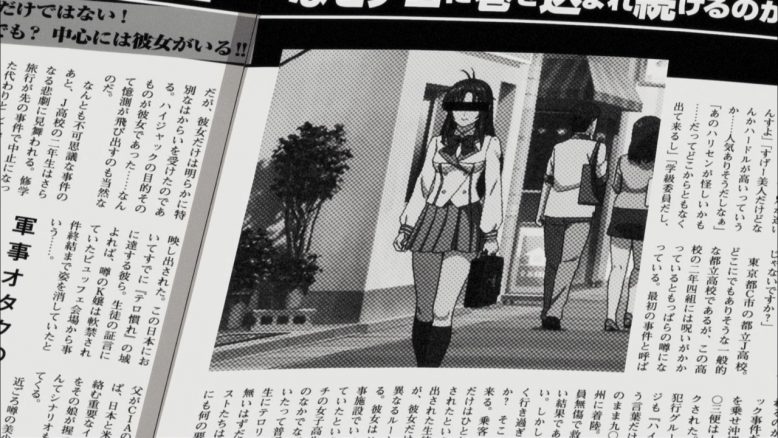 Of course nothing goes well for too long. The obvious drama point was pretty well telegraphed. Sooner or later Sousuke’s bloody past was going to be something for these two to face. He did a lot of killing before he got to Mithril and a fair amount after joining them. There is blood on his hands and they have to think about how they feel about it. And they need to presumably reach the point of saying that “yes he does deserve happiness.” But that is something they have to face. And it isn’t just an issue for him. Chidori has been targeted since the show started. It was an eventual reality that if a large organization wanted her badly that they’d be willing to turn her home and town into a living hell in order to get her. 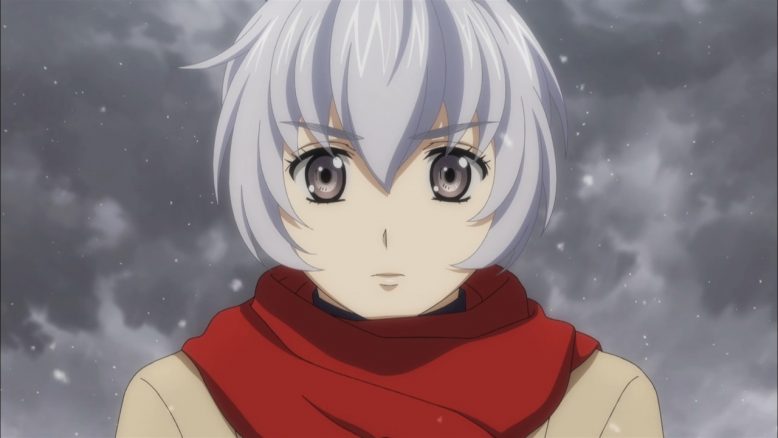 No shock either that Mithril is now facing a serious threat. Amalgum is done playing around. With the wins the main cast were getting that was bound to happen. Mithril isn’t invincible and are now going to be facing an attack on a scale of which they’ve never experienced. The scary thing is that it sounds as if this attack is hitting everywhere. Even the top of their organization may have been attacked. That in itself is scary since if what is effectively a mercenary organization loses its funding…that could lead to problems. I can honestly get why Sousuke is considering just running off with Chidori. Mithril isn’t absolutely trustworthy. And things aren’t looking promising for the main cast even at the end for their safety. 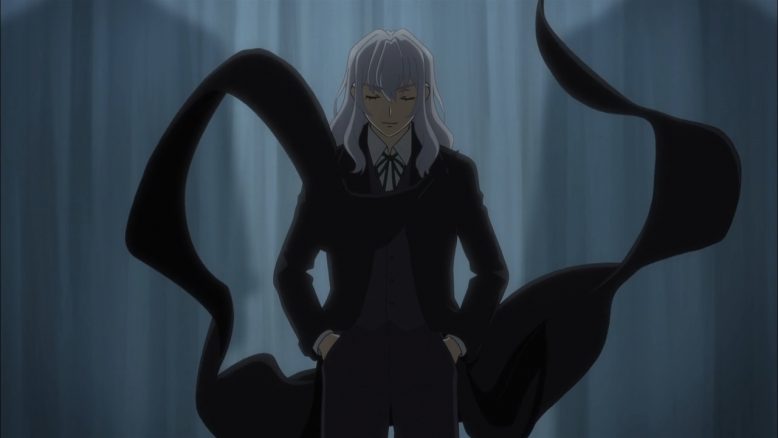 There’s no more holding off on the issue of Leonard. This guy isn’t just a background threat, but making some direct moves here. Also apparently he has that magic cloak from Doctor Strange. Though I’m sure it’s some active tech that can stop move itself to stop bullets. That is kind of cool though. I do think the scariest stuff that he’s got up his sleeve are those human sized robots. We saw what those things could do back in the Second Raid. Just took apart one of the scariest people we’d seen in the show to that point and brutally killed her. So I wouldn’t want to see Sousuke having to fight off those things. Sadly he kind of has to…though the plan I would guess is to drive around like a madman until help arrives. 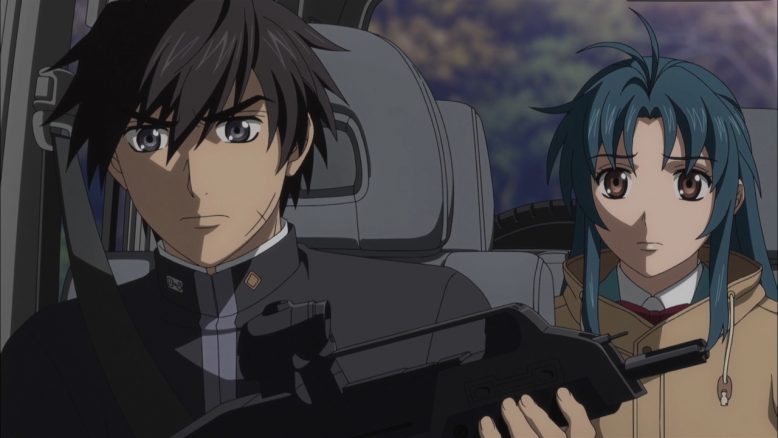 That was a strong first episode. It got us back into the story and showed how bad things are going to get. This is a full out war now for Mithril and Sousuke. Everything they care about is at risk. Sousuke and Chidori especially are going to have to decide what is important to them, what they are willing to give up, and what they aren’t willing to sacrifice. It was good to see Tessa again along with Kurz and Mao. I hope this season can deliver everything we’ve been waiting over a decade to see. This episode didn’t give me cause for concern so that’s a good first step.