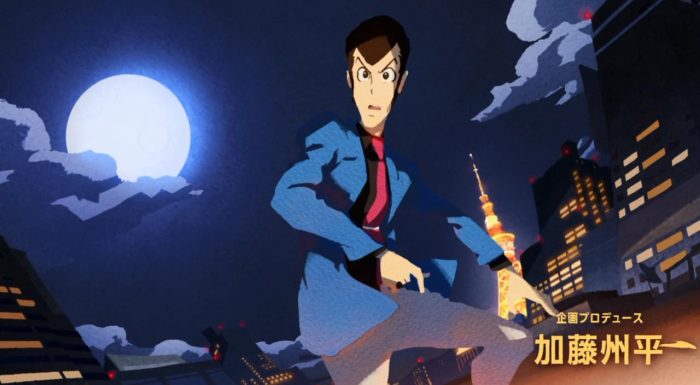 Man! I haven’t had that much fun watching an anime episode in a good darn while. Ahem! What’s up everyone? The Spring anime season for 2018 is very much here, and leading the charge for new and anticipated sequels, is none other than Lupin the Third himself. 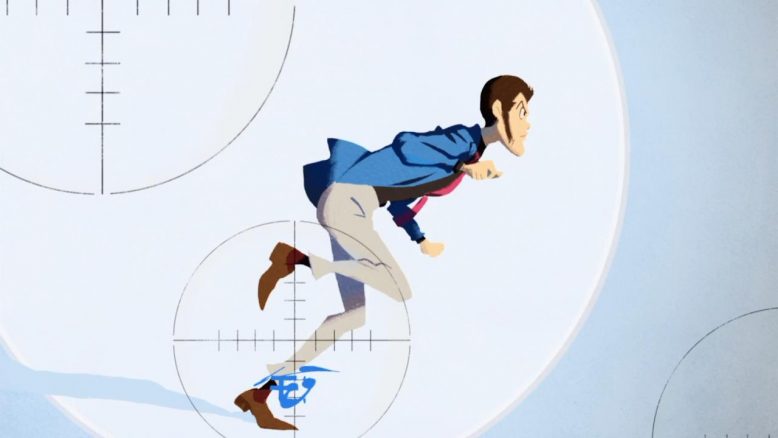 So… Let me start by stating that Lupin the Third is a character (and franchise) that I’ve always found immensely fascinating. For one, Lupin III is a property that we’ve seen since some of the very early days of the anime medium itself, all the way back to the early 1970s. The original manga, which spawned an anime franchise spanning decades, came out in 1967, with the first anime series debuting a few years after in 1971. That’s quite the long running franchise…. And, throughout that decades spanning run, one thing has always been very consistent about Lupin III; the particular tone and feel of each core series and movie entry in said franchise.

Indeed, the thing that I found so striking about 2015’s revival of the franchise a television anime series, was the fact that it really did feel both modern and yet so true to the original movies or the three series that came before it. There’s always the exception to the general rule (i.e that weird spinoff series that focused on Fujiko Mine that went to some really dark places) but in general, I’ve found anything bearing the Lupin III name to be incredibly fun, exciting and deeply entertaining. 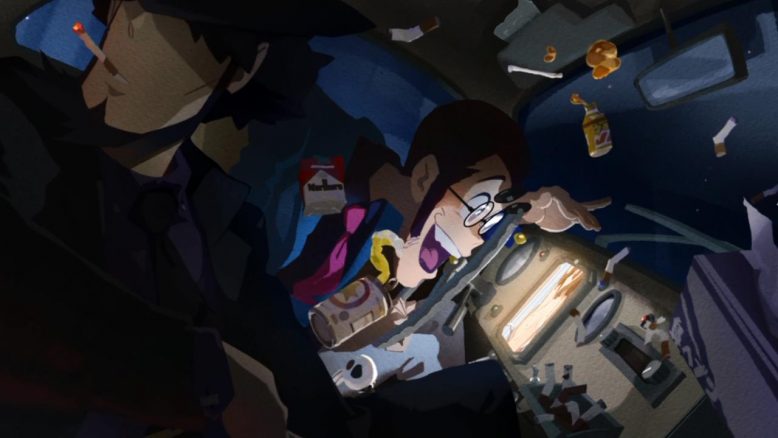 There’s a swashbuckling, adventure like equality to a Lupin III story, that I think is ultimately timeless and evokes a feeling that I think traditionally western properties James Bond, Mission Impossible or Indiana Jones used to exude. What’s nice about Lupin III, however, is that it embraces not only the fun and wonder that the franchise has established since its early days, but it also dips one toe into flat out cartooneyness. Thus there’s certainly a consistent tone and a familiar feeling of fun, but even more importantly for a long running franchise, there’s this set of rules that a Lupin III story always follows.

It doesn’t matter what the time period, setting or story are about, a Lupin the third series will always have some key ingredients. And this week’s episode, the premiere for the 2018 version of Lupin III, had all of those elements in spectacular fashion. 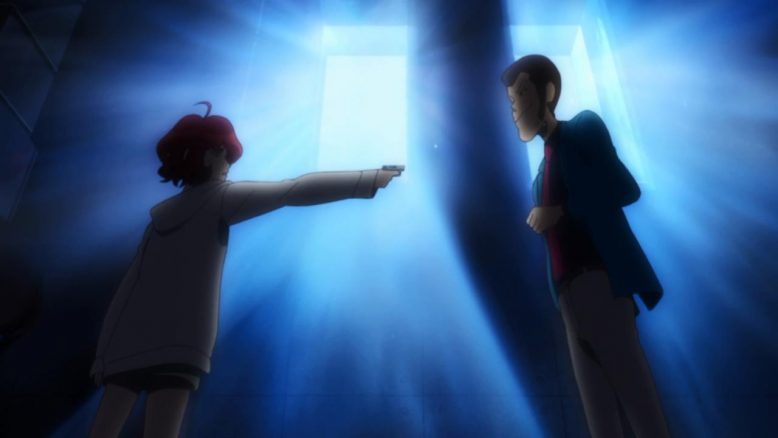 You just can’t call something a Lupin III series without the joking, confident, cocky and clever charisma that its title character displays. Lupin III is the loveable, charming idiot that’s got the right combination of wit, cleverness and lovable clumsiness that makes him a truly lovable action hero in the same vein as say a James Bond or perhaps more aptly, an Indiana Jones. The fact that Lupin III nails its title character, every darn time, is something that just amazes me about this franchise. The consistency, the care and the love of every director, writer and producer involved with this property, always shows in how familiar and true to himself, Lupin III himself acts, reads and feels.

But of course, Lupin is just one part of the equation. There are some other key elements that make up the Lupin III experience. Jigen always being by Lupin’s side as his trusty side kick and friend, Goimon appearing out of nowhere and being his badass samurai self, Inspector Zenigata arriving on the scene with his almost insanely obsessive drive to capture Lupin? It’s all here, and its all of that, that I both look for and expect from a Lupin III series. 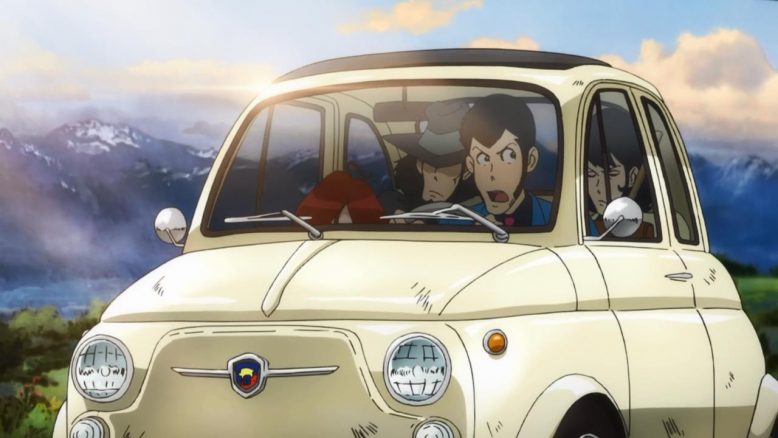 So… If you’re a fan of Lupin III (whether its from the 2015 series, or the long line of movies/anime series themselves) you’re going to feel right at home with Lupin III part 5’s premiere episode. But I think just calling Lupin III Part 5 nostalgically familiar is doing it a big disservice. One of the other most important elements of the franchise, and one that keeps it relevant throughout the times, is its ability to evolve, change and tackle fresh subject matter. And man, does this premiere episode start us off on one heck of a new idea.

See, I think 2015’s series started something impressive by bringing a unique visual style, a new core character and expanding the world of Lupin III into the modern era. What this series does, however, is something that goes a step farther. What I love about this week’s episode, is that it puts the major plot device and the basic scenario for the story, square on the idea of concepts like the interactivity of the internet and social media. 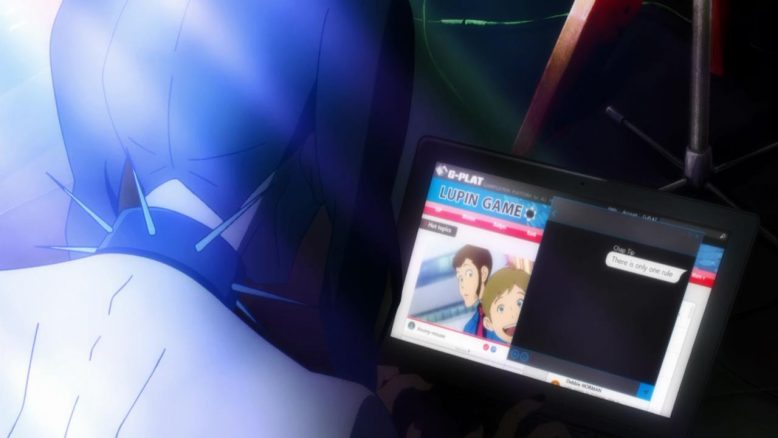 In essence, while 2015’s series told a more standard Lupin III story but with a modern fresh coat of paint, its this 2018 series that’s exploring some really smart and fascinating ideas. Chief among them, is Lupin III’s own fame, and how that is going to work badly against him.

I mean, until this point Lupin has been able to blend in and out of spotlight by using his exceptional skills of disguises, technology and thievery. And sure, that works, with perhaps a small bit of suspension of disbelief… But… In this day and age, with cameras, mobile phones and stuff like Twitter, Facebook and Instagram, its almost impossible to imagine Lupin being able to stay as incognito as he does. There’s just too much of a potential for someone to spot him, and post it online. 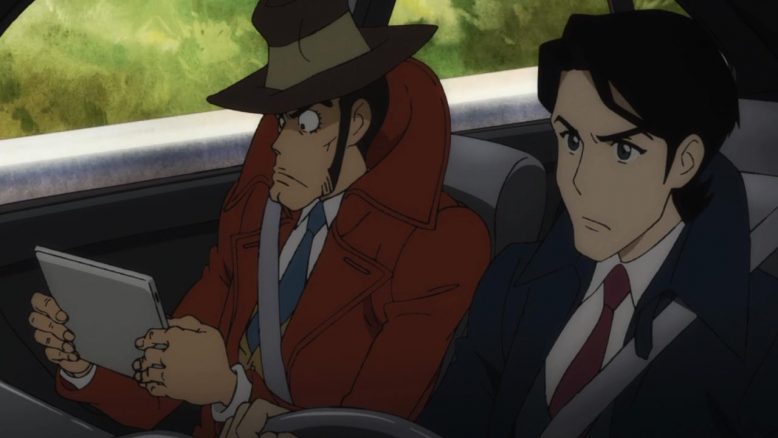 Which, incidentally, is exactly what happens in this week’s episode. Lupin begins the story by trying to steal from a big organized crime syndicate, targetting their cyber drug operation. Its in this gig, that Lupin runs into a young genius Hacker, Ami. The two make a deal, and Lupin agrees to help her escape if she gives him access to the international drug mafia’s online system and money. Lo and behold, the Mafia retaliate by creating a social game where everyone in the world is working together to catch and spot the renowned thief known as Lupin the 3rd.

Which, man, is that a clever premise that I didn’t expect a Lupin III show to ever tackle. Its something interesting, and unexpected, and adding that, to the familiar formula of Lupin III, with its Zenigata chase sequences, its Lupin pining after Fujiko and everything else, well it adds a dose of originality and freshness to a franchise that’s always delivered fun entertainment. 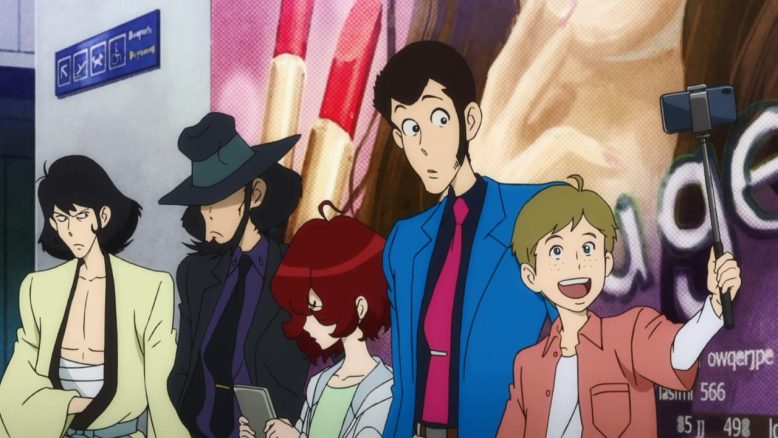 This clever idea, this use of something new and novel, is I think where long running franchises can really surprise. Its why I think western characters like Batman, Spider-man and even James Bond will always have a place. Do just enough to rock the boat, while keeping the core idea intact, and well, you’ll have something special. And while it may sound like something easy, I do believe that what Lupin III Part 5 has done here is pretty darn special; Its something that only the best people in entertainment and storytelling can actually pull off.

But… Having said all of that that, at the end of the day, I think I just need Lupin III in my life right now. Something like Lupin III is exactly what I think a lot of us need these days. Good clean fun, exciting action, fun and charming characters and a show that doesn’t take itself too seriously. Something upbeat, positive and exciting. Welcome back Lupin III, I can’t wait to see where you take me, this time around.