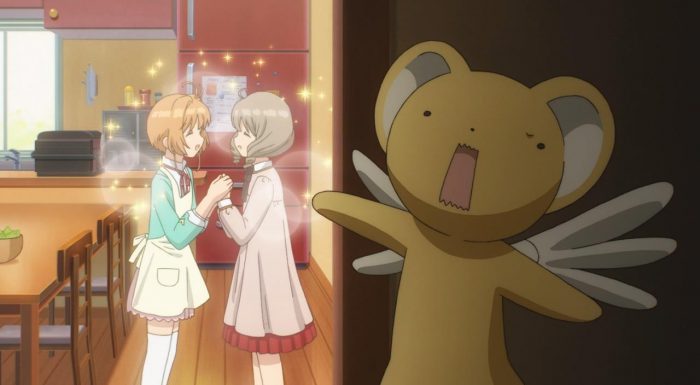 There are times in Card Captor Sakura Clear Card hen that make me wonder about whether its actually okay for me to watch it. Maybe its because of my age and who I am (a dude), but I find myself feeling increasingly disconnected from the experiences of Sakura’s middle school life, particularly the one from this week’s episode.

I mean, don’t get me wrong, I remember quite fondly having a friend come over when I was a kid, but uhhh… Something about this week’s episode made me feel uneasy as I watched it. 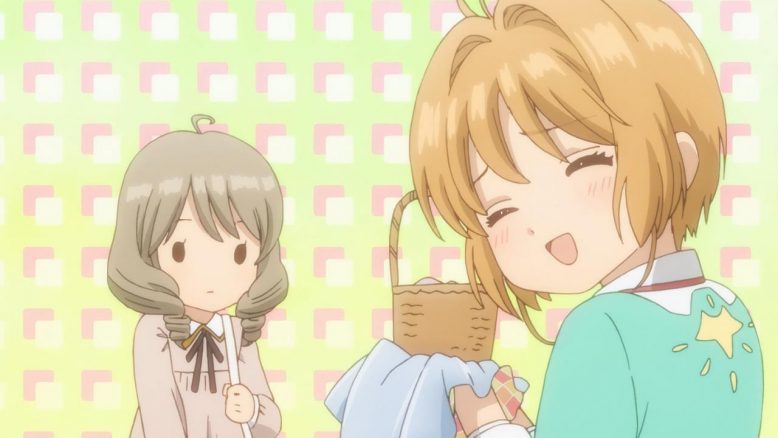 One of the reasons for that, perhaps, was the actual interaction between Sakura and Akiho itself. Said interaction definitely felt a little off, in how it was depicted. As I’ve mentioned when talking about this series once before, Anime has come a long way since the original Card Captor Sakura.

With all that time, we’ve seen a maturation of middle school student depiction in anime, which definitely has me spoiled. I just couldn’t get behind Sakura and Akiho’s rather “cheery and overly formal” way of interacting. It felt like every moment was a chance for both of them to smile and then agree with one another, to the point where I feel it just felt odd. 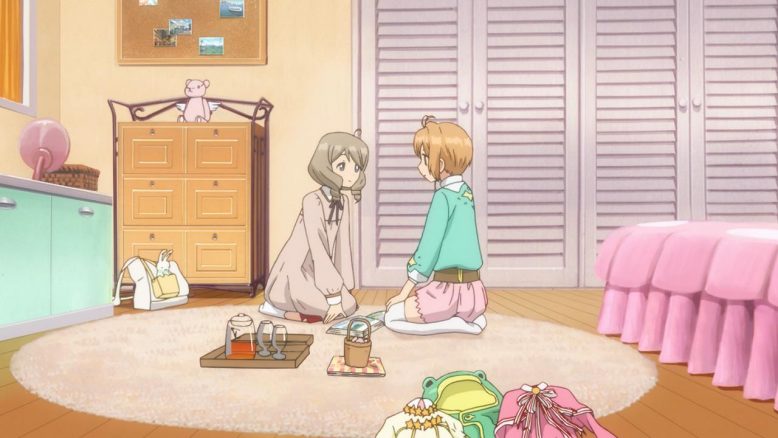 I don’t pretend to know or even be familiar with how middle school girls act (these days or otherwise), but I hope to God that this isn’t it (even in Japan). Granted, the whole Akiho visit was just another pretext for a couple of cards to appear, but it just felt like she and Sakura weren’t really doing anything.

I mean, they had tea, and then had lunch and then Akiho fell asleep. Compared to some of the more recent episodes which have a done a phenomenal job of selling Sakura’s “normal” life, this one just felt a bit odd. 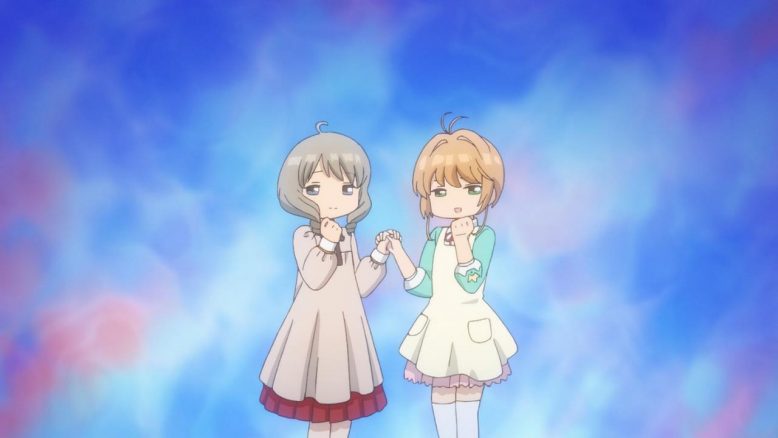 The conversation itself wasn’t too bad, especially with hints of how Akiho wanted to learn how to cook, and how Sakura could’ve helped her with that. A better setup for this episode might’ve been the two girls getting together and doing some activity like that, but maybe I’m looking at this from too much of an adult male lens.

Speaking of which, I suppose I should also mention that I felt a bit weird as a dude in my late twenties watching the “Akiho’s day visit to Sakura’s house” thing. I know I probably shouldn’t feel as conscious as I do, but it just doesn’t feel like this particular episode was directed at me at all. I feel like, or at least remember, that the first Card Captor Sakura series did a much better job of keeping Sakura’s daily life moments relatable and general enough for anyone to enjoy. 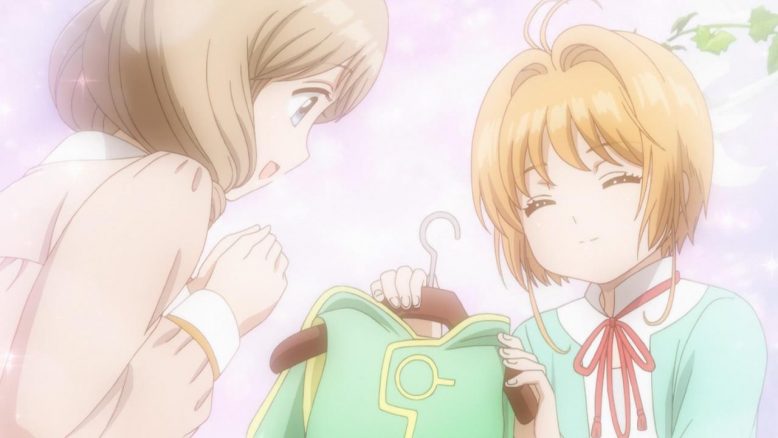 This week? I almost felt like a voyeur peering in on two little girls hanging out, and not really wanting to. Maybe that speaks to the power of the episode’s writing itself, or maybe it just speaks to my own insecurities, but this week’s episode’s slice of life segment definitely didn’t felt like it was more aimed at the female audience than anything else we’ve seen thus far.

As for the cards? I mean, it was fine, as it usually is. Sakura is getting pretty adept at using her new powers and seems to be catching all these new cards without a lot of difficulty or effort. The actual card capturing segments themselves aren’t overly complicated or creative, but they kind of get the job done. 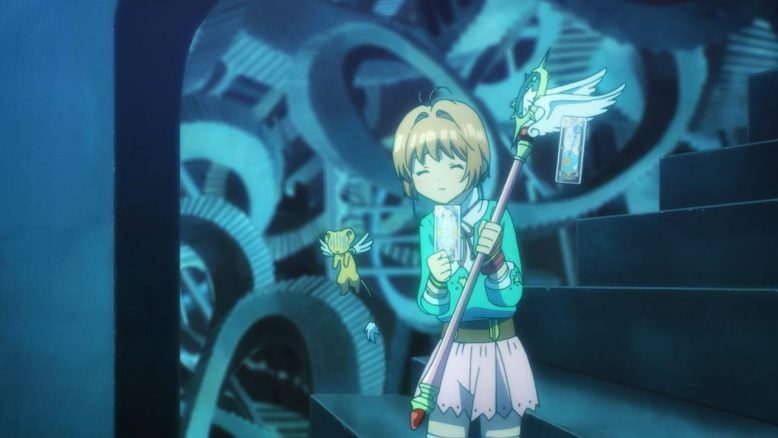 Labyrinth and Snooze seem like decent enough powers to add to Sakura’s arsenal. Of particular note on that aresenal, is the almost playful gentle nature of these cards, which seems to lend credence to the theory that these cards are Sakura’s own powers manifesting themselves.

The final thing I’ll note, is that, as always, I appreciated the inclusion of Mei Ling at the start of the episode. The show doesn’t NEED to go out of its way to keep integrating her into the story, but the fact that it is, and that its doing it so seamlessly, is definitely commendable. Its not odd, these days, to have friends overseas that you keep in contact with via technology, and its nice to see Sakura have that particular aspect to her daily life as well. 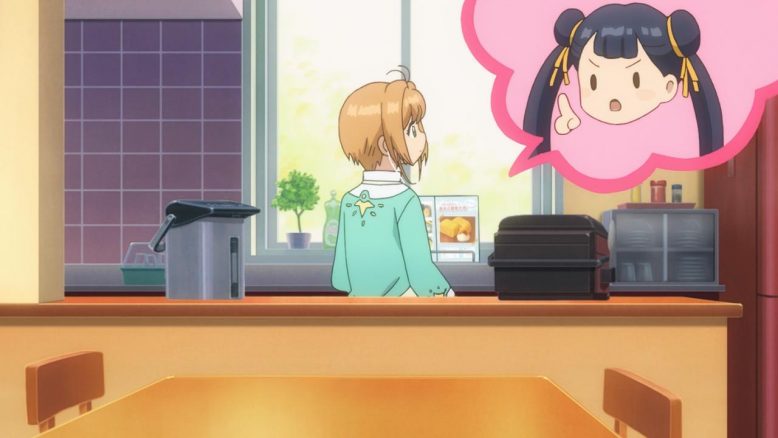 Having said all of that, however, I do feel like this week’s episode was a bit of a filler one. I don’t believe that Akiho or Sakura progressed all too much as friends, and their little interaction didn’t tell us anything we didn’t already know.

Akiho likes her butler, and wants to become more self reliant in an effort to have him view her as a girl, rather than as his boss/employer/master. Its a fool’s errand in some ways, I think, because the improperness of it all ruins any chances of it happening. Akiho isn’t destined for a happy ending like Sakura, and I think the show could mine this particular part of the story better than it has. 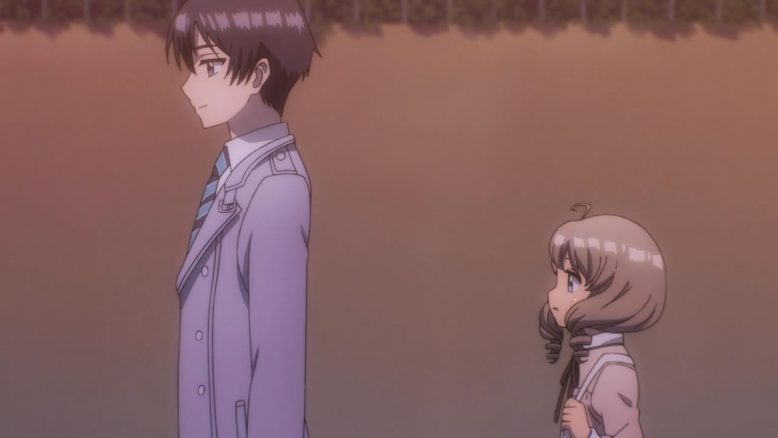 As for the Clear Card mystery? It made zero progress this week. I am glad, however, that we didn’t get a reminder of how everyone else feels compelled to “hold off” on helping Sakura because of their unknown “Reasons”. In general, It was actually a nice change seeing Sakura just hang out with one character, and one that isn’t named Tomoyo or Syoran.

All the episodes can’t be a win, so I guess this one was just one of those “I could take it or leave it” episodes. Again, we’re getting close to the half way point, and I’m wondering if CCS CCH is going to do something particularly interesting soon. Thus far, we’ve just hung out with Sakura and seen her amass a new set of powers. There’s definitely a void for something actually monumental to happen, but I’m not exactly sure if the series is even remotely ready to do something like that. In the mean time, I’m still here, but I can’t find myself getting too excited, just yet.