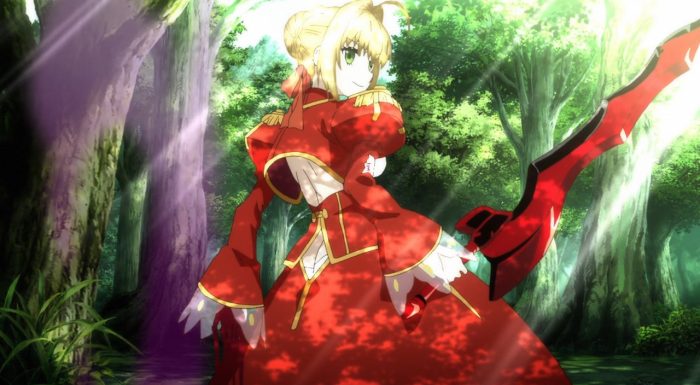 This episode was all kinds of interesting. The information bomb from last week about the timeline was interesting. But this latest episode just ramped up the intrigue with what it revealed. The situation Dan Blackmore found himself in was far more surprising than anything I could have guessed. He very much did perish during the original Grail War almost 1000 years ago. The crazy thing is what happened after that point. For whatever reason he was resurrected, made a floor master, and wasn’t himself when that happened. He was brought back, but he wasn’t a master any longer. And honestly whatever was brought back, wasn’t quite the Dan that perished. That guy would never have coldly gone about sniping people, using trickery, or relying on Robin’s stealth tactics. The Moon Cell couldn’t capture the essence of that man. 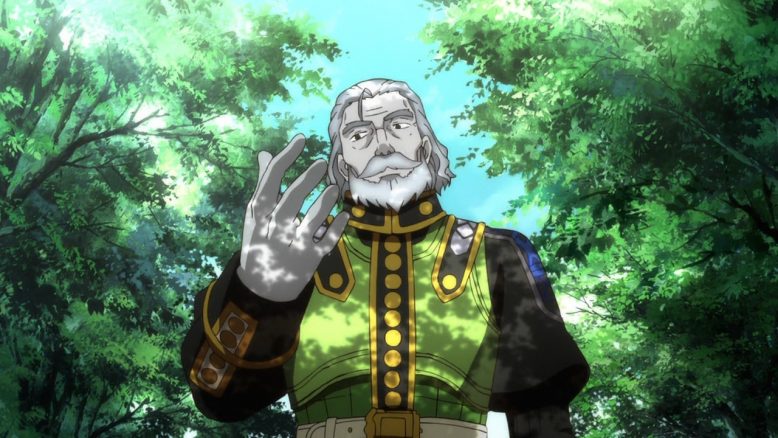 I hate to say it…but all this information does make me respect this version of Shinji more. He legitimately kept his sanity and kept running that city for Masters…for one thousand years. That’s a pretty remarkable accomplishment. It is no wonder that all the other masters on the first floor locked themselves away. Honestly I wouldn’t even be surprised if they killed themselves long before Hakuno arrived on that floor. 1000 years is such a crazy period of time to continue existing that I can’t wrap my head around it. I suppose for Saber or any servant the time gap isn’t a big deal. These are individuals summoned from hundreds or thousands of years ago. What does the year 3000 mean in comparison to the year 2000? 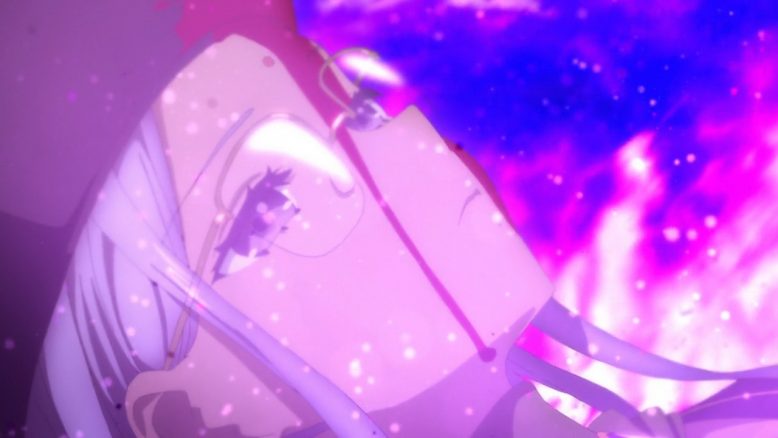 RIP Rani. It is true that she never asked or expressed a willingness to go along with Hakuno to the next floor. Unlike Rin who…somehow appeared on the ladder with him. She’d been resisting for 50 years, but one would presume she’d been in that world for closer to the 1000 year time period mentioned before. I suppose in the end she just wanted to put an end to it. So long as she could die knowing that those Dan killed were avenged that would be enough. One could say there was no point then in Hakuno saving her. But I think his actions had meaning. They reflect the kind of person Hakuno is at his core. He is more than the accumulated anger and rage that is part of him. Hakuno’s heart is still good. 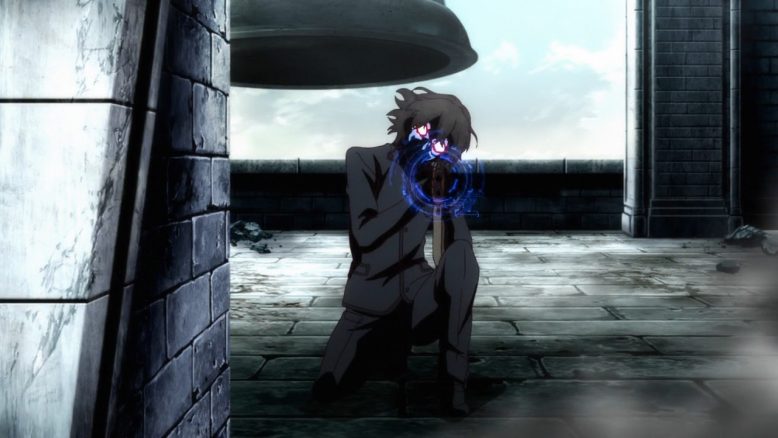 Ok, that is a bit creepy

I do like that this time we got to see more of the Death Face. It does appear to be an extreme kind of physical power-up that gives him some crazy speed and physical strength. I’m guessing Rani used her ability to provide Hakuno with a gun that he later used to snipe Dan and settle that fight. It does sound as if this ability has some risk to it. If he doesn’t take care then he might get swallowed up by it. But for now Hakuno has little choice. He has to rely on what he has in order to keep moving forward. While Hakuno may not be gaining new memories, he does appear to be gaining his emotions. 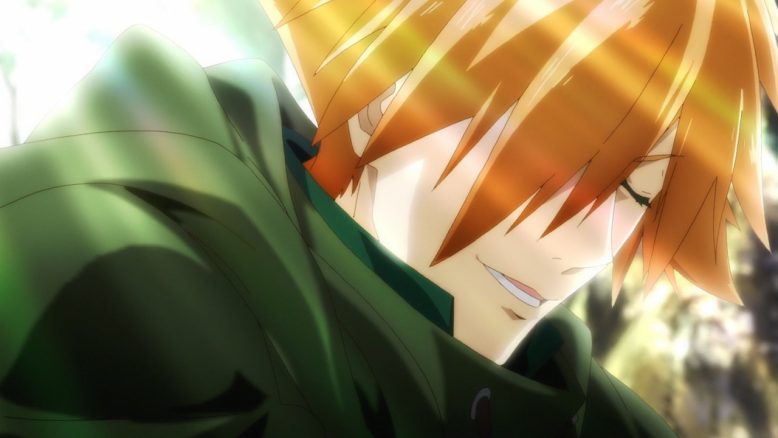 There was good fun to be had watching Saber vs Archer in this one. That was one heck of a bold if not risky strategy there. She took care of the problem of his noble phantasm blowing her up…by bleeding out. That is a handy ability. Being able to survive and continue fighting three times so long as her body is intact is useful. True enough if she had been blown up by his noble phantasm that would have been it, but so long as it is just a normally fatal wound…she can handle it.

Robin Hood’s situation was understandable. He just couldn’t bring himself to slap his master with reality. All Robin could do was continuing to follow his orders and fight the enemies presented to him. At least I don’t feel bad about the end for Dan or Robin. In a sense both of them needed the fight to end. Saber, Hakuno and Rani were important in bringing their fight to an end. 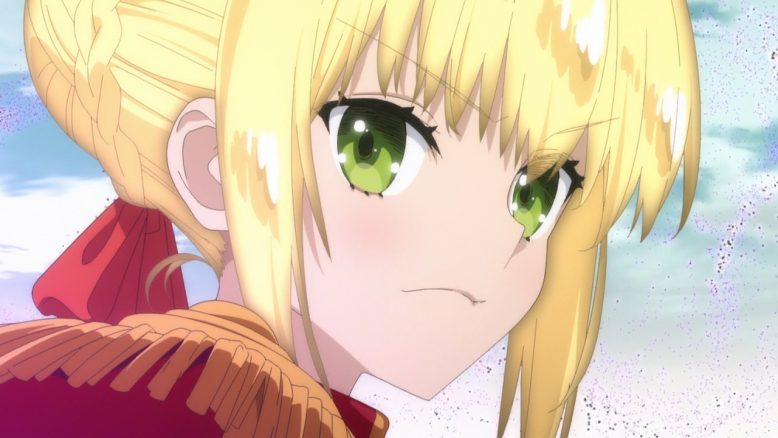 This was just a really interesting episode. Who knows what kind of masters are going to appear going forward. We saw someone like Shinji that could have kept going, but preferred to stop and be a floor master. Now we’ve seen someone like Dan resurrected and continuing an endless slaughter. No telling just who might appear next time and what their situation may be. Regardless though, Hakuno and Saber need to keep pressing forward and face them. 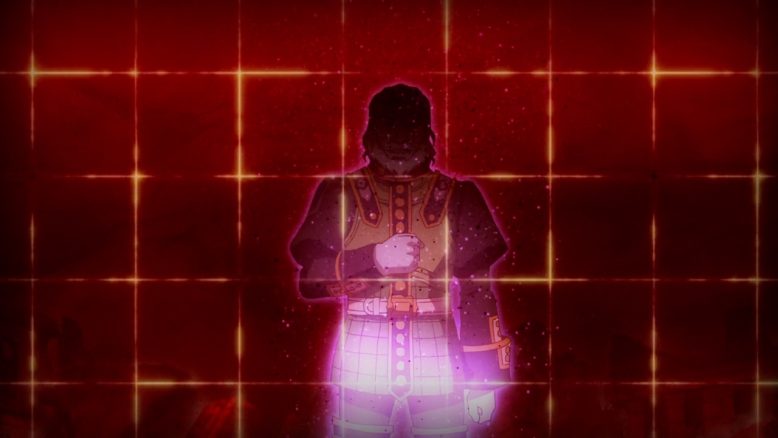 Wow this episode was really interesting from a Fate/Extra player point of view. I was just pulled in seeing so many scenes playing out at the start that happened in the game. Honestly I didn’t expect Dan’s situation to be what it was. It had me baffled seeing the familiar duel situation from the game itself and then seeing Dan defeated. Dan’s last words sounding like what I could remember from the Fate/Extra game itself.

It is just sad seeing what Dan turned into by the end. He was such an honorable guy who wanted a straight up fight without tricks or sneak attacks. And true to form he did perish in the original timeline that the show is presenting. It is just sad to see him turned into a cold killing machine that was obsessed with victory above all else. Will other Masters we see be like this guy? It should be interesting to keep watching and find out. I’m loving that even as someone who played that game, things are continuing to surprise me.