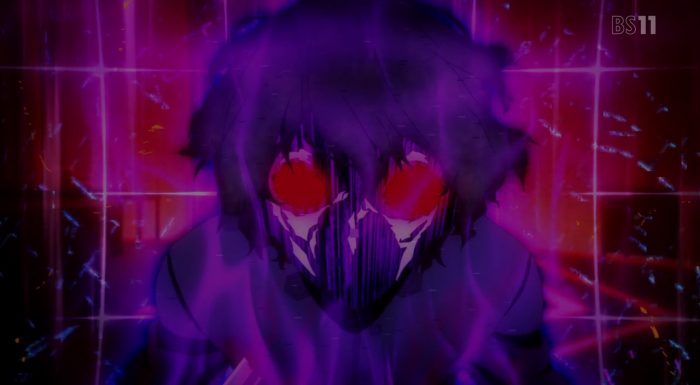 It is an interesting feeling being able to relate to how the characters are feeling. I could truly share Saber’s confusion in what she and Hakuno found on the first level. A city in basically a festival mood was not what I was expecting either. Of course they are inside a digital landscape so just about anything is fair game, but this was a surprise on many levels. Again a great part of this is that people who know nothing about Fate/Extra and those who played the original game are on a similar though different footing. There’s very little to even potentially spoil here because they are going a very different route with story progression. It does feel like those differences are plot related though and not different for the sake of different. This episode really has me hyped to see what is going to happen next. 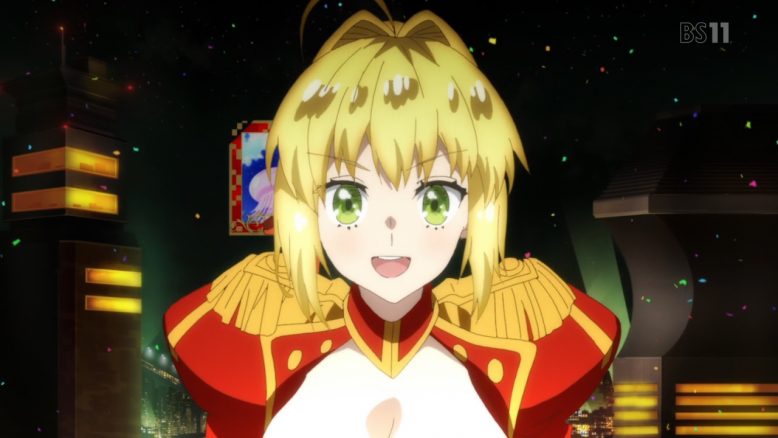 She really does enjoy herself

I’m just going to say it now…I really love this Saber. With how the Fate series works various heroes or historical figures can be summoned into the seven different classes (Saber, Archer, Lancer, Rider, Caster, Assassin, and Berserker). Different ‘Sabers’ will exist depending on who is summoned in a particular war. But I quite like this Saber character. A very over the top personality, but that’s not crazy since some historical figures probably did have very extreme personalities.

She’s a very bold/confident person who knows what she likes and clearly doesn’t have a problem expressing that. You can see that both in having no sense of shame in walking around naked in the bath with her Master nor talking about her love of the cute female police force they encountered. And it isn’t even (simply) a fanservice thing. There are times in history when nudity in that setting wasn’t anything to fuss over. At the very least I appreciate using that bath scene not only to touch on what kind of personality Saber has, but also pass along some needed exposition. This setting is pretty unique even within the Fate franchise so explaining things is helpful. 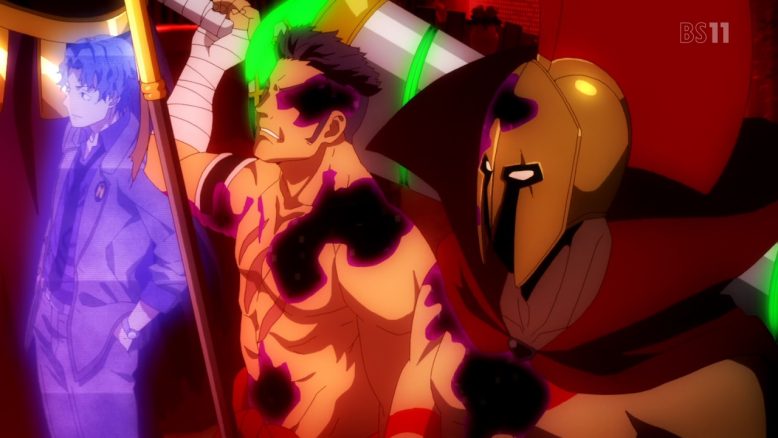 Quite the unusual situation though that they find themselves in here. Saber expected to find their first round opponent. 128 (plus one irregular in Hakuno) Masters were chosen to fight in the grail war. And if you divide that number in half seven times would lead you to one winner of the war. Clearly Saber expected to find an opponent for them to clash with and then they’d move onto the next round. Instead they found a party and the realization that things have gone very wrong here.

They found no opponent and instead have a city with Masters who have quit the war. Even though all the Masters worked to get to the moon (apparently by hacking via magic into the moon cell) no one is fighting. The vast majority have given up their servants in order to live in luxury. Although it also appears they have slid into a slothful and empty existence where no one goes outside. Even creepier is that Shinji is apparently ruling the place. I’m not sure if it reflects how strange things are that he doesn’t really talk to Hakuno with familiarity nor seem fazed that someone he tried to stab to death is standing there. 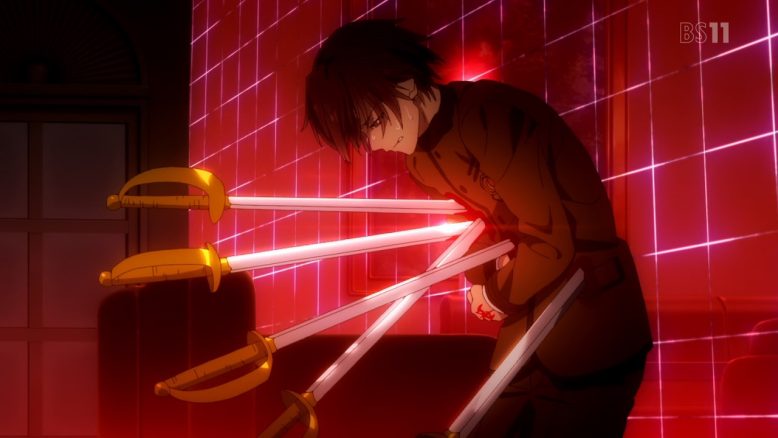 The time gap seems weird as well. It didn’t take that long for Hakuno to run into Saber and start climbing to the next level. If events as we saw them were real…would that much time have passed for Shinji to be ruling the city? I guess it begs the question of whether what we saw in episode 1 was fully real. Was anyone real outside of Hakuno himself? That Kirei looking guy talked about Hakuno as the 129th Master, a number that shouldn’t exist. Was that whole opening episode a weird kind of horrifying loop? The Holy Grail war that Shinji and the other 127 fought fell apart into the mess we’ve seen in episode 2. So the system or something was repeating the preliminaries over and over trying to create a miracle to shatter the status quo? 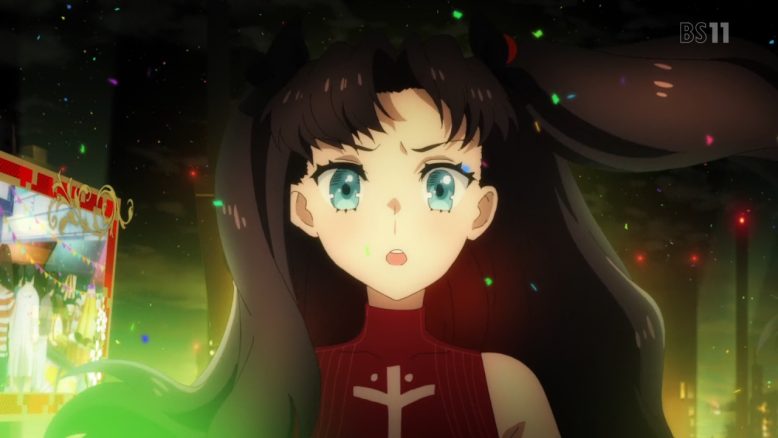 Honestly I don’t have a clue what is going on XD. In some ways that is kind of fun since I can just take events as they come. But at the very least some elements around Hakuno are interesting. The incredible rage that is bubbling inside of someone who seems normally fairly emotionless is interesting. Rin that we saw near the end called it “Dead Face”, but not sure what it really means. Regardless though you can tell that there is more to Hakuno than what we’ve seen and his normally passive attitude has a meaning behind it. 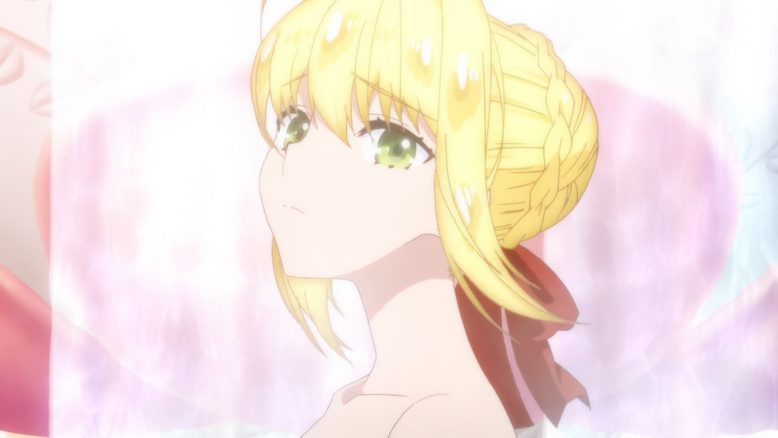 This was a pretty interesting episode. The surprises keep coming with this show and I can only guess at where we are going. What is clear is that fighting will be necessary. Saber has her hands full with those Berserkers that Shinji has unleashed. I’m not sure if I should be more worried about Hakuno…or those (probably) NPC police ladies that he’s up against XD. He has a pretty durable digital body and a lot of rage. It was also kind of cool to see servants I know from Fate Grand Order appear in this episode. Hopefully we get to see more of Saber kicking rear while they try to figure things out.