Nanatsu no Taizai: Revival of the Commandments – 02 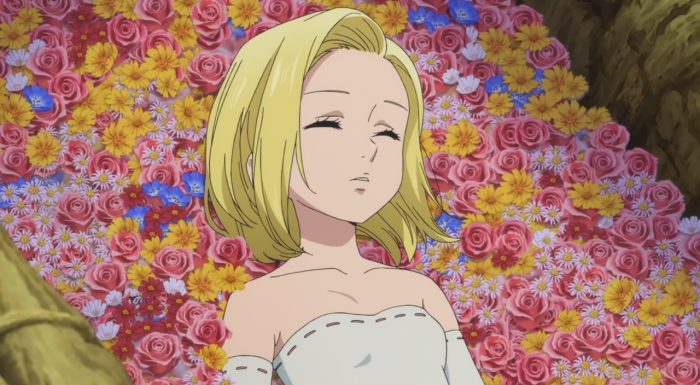 Now things are getting more interesting. There was honestly a lot going on in this episode. Yet it still feels like the show is just getting started. Things aren’t going well in general it seems. Even with the Commandments not having made a dramatic move yet, the Sins are having a tough time. Whether it is Ban and King in the forest or the Sins back in Liones…things aren’t going great. Though it might be at the most dangerous back in Liones with Gowther frankly going so far overboard I don’t know where to start. It doesn’t seem like things are going to get any easier for the Sins to deal with either with the Commandments getting themselves ready. The only positive I can find at this point is that the Commandments seem out of magical energy due to being sealed away. 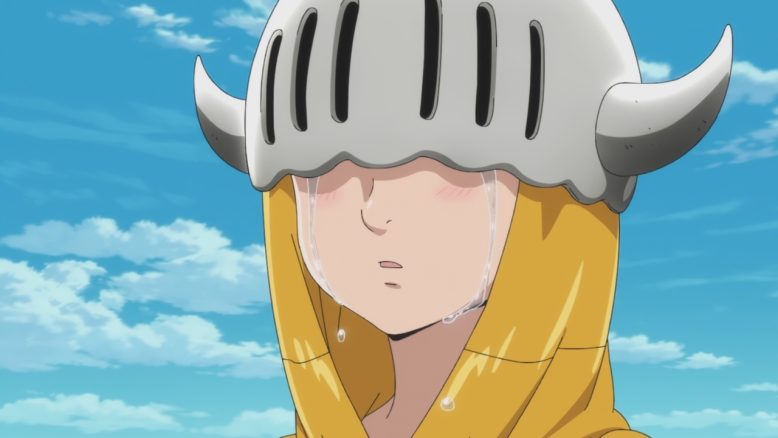 I do want to take a moment to look at what is going on with Ban and King. It does make sense when looking back at S1 that the forest has revived. Elaine did give Ban that seed and told him to plant it somewhere. He probably went ahead and did that straight away to honor Elaine’s last wish. Guess that was one heck of a potent seed since after a few decades the forest has revived to that extent. You can tell that the new sacred tree is still young, but in time that forest will be back to how it was when Ban first visited it. I guess as a result of reviving the forest the faeries decided to proclaim Ban as their King. Elaine did seem to believe that the forest knew a danger was coming and chose Ban.

Of course it is pretty hypocritical for them to be pissed at King for leaving when Ban apparently left right away after reviving the forest. He went and spent all that time with the Sins, getting locked up in jail, and joining the fight to save the Kingdom. Of course for the faeries leaving for a few decades (without anything happening) is probably not a big deal. King left for centuries, Elaine died, and the forest was burned down so that probably bothers them more…Although no one is more pained by what happened than King himself. If he’s represented by anything it is guilt. He couldn’t save Helbram, he couldn’t save the forest, his sister died, and things didn’t go smoothly with Diane either. 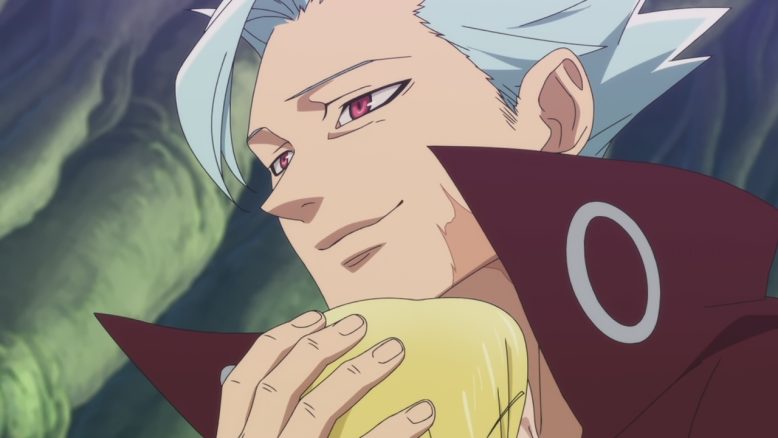 King isn’t the only person feeling guilty. You can tell that Ban can’t forgive himself for fighting Meliodas. Although it doesn’t seem like Meliodas holds a grudge against Ban for doing so. I’m not going to say trying to kill your friend to revive your lost love is a good thing, but it is a human thing. Elaine is an incredibly precious existence for Ban. He was someone used to being an outcast who finally found a person who accepted and loved him for who he was. Then he gained immortality and couldn’t even anticipate reuniting with her in death. Of course he’d jump at a chance to bring her back. It just eats at him all the more that the price for that resurrection would have been killing the second most important person to him…his best friend.

I do like that Ban hasn’t given up on Elaine (sorry Jericho). It is shocking that her body looks perfectly fine. A bit sad though that she’s basically left in that lifeless state. Ban can’t give up on seeing her again. All he can do right now is look over her lifeless body and promise to do something about it. 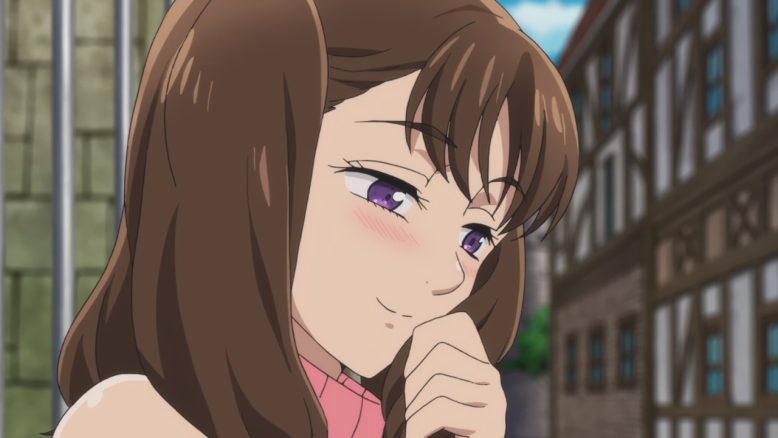 It is a bit crazy that Helbram is still hanging around (in a sense). Though I guess after being killed and revived over and over…I can buy him basically possessing that helmet. Plus right now King does need someone by his side that can be supportive. His people have basically rejected him. Elaine’s lifeless body is basically a haunting reminder of his failure as well. It is just his luck that he chooses to go on this painful trip at a time when Diane has recovered her memories and would be happy to stay beside him. 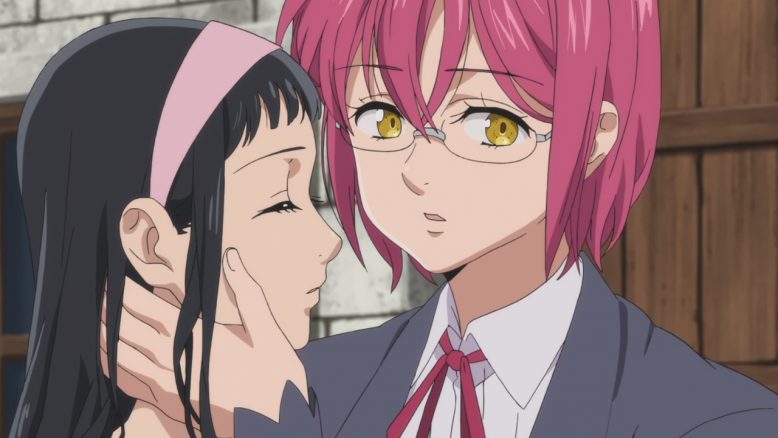 Diane really is in a great spot right now as a character. Her memories of King are back and she’s fully accepted being in love with him. Clearly she’s over her crush on Meliodas and is more than happy to support Elizabeth. Understandable how utterly pissed she is at Gowther near the end of this episode. In general I think she’d be pissed at him playing with people’s hearts and memories. But of course it angers her even more because she lost her memories of King for a long time. That Gowther would mess with the memories of Guila and her brother for his own purposes would just set her off. And frankly I’m completely with her. Yeah, Gowther is clearly not human and always had a serious lack of empathy. But up to this point he was basically on their side. A borderline enemy right now. 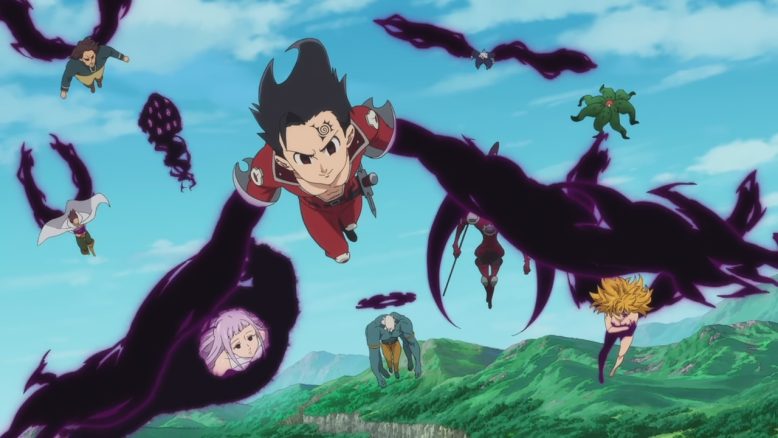 Things aren’t going to get any easier. Gowther is basically a hostile force and the Commandments are ready to take some action. Yet the Sins are basically scattered and dealing with infighting. Meliodas seems pretty determined to get something back from Merlin. All we know is that she knocked him out when the Sins were framed. Hopefully whatever it is, she can hurry up and return it. It seems like they’ll need all the help they can get with the Commandments revived. I’d say this episode was a stronger one than last week since the story is starting to build up steam. But, I can’t wait to see how things will go with the clash between Gowther and Diane next episode.