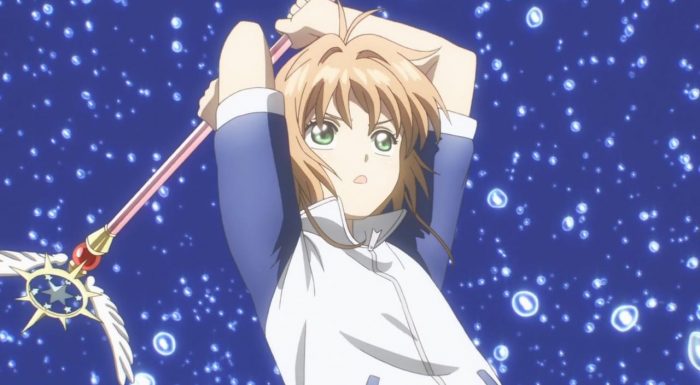 Three episodes in, and I’d say this new Card Captor Sakura series has finally got it all back. While it didn’t make the best of first impressions, I’d say Clear Card-hen has more or less fixed any issues or problems that I may have had with it. Now, three weeks after the series actually started, I feel like I can get on the hype train that everyone else has been on, and truly be excited for what we’ve got here; More Card Captor Sakura. 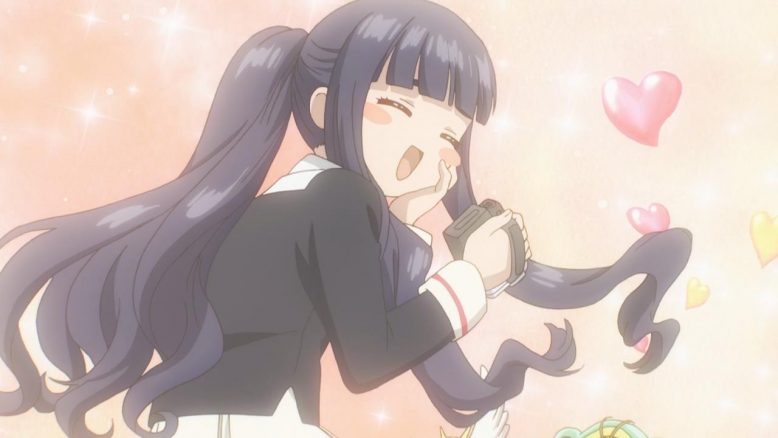 How I felt watching this week’s episode… XD

What makes this week’s episode such a huge win (for me), is the fact that it just manages to balance everything so beautifully. There’s an equal amount of focus on Sakura’s personal middle school life and her new challenges with the clear cards. Unlike the last two episodes, where the card stuff felt disjointed or even separate from everything else, this week did that thing that I remember the original series doing oh so well. The show integrated the magic and the fantasy with the slice of life, and that, made for a very entertaining and cohesive whole.

Plus, to make matters even more impressive, this week featured not one, but two Clear Cards. If you remember, last week I was super critical about how Tomoyo basically used a friggin pin to defeat one of the Clear Cards for Sakura to then seal. Which was a darn shame, because as I remarked last week, Sakura would often use her cards in creative and interesting ways in the original series. 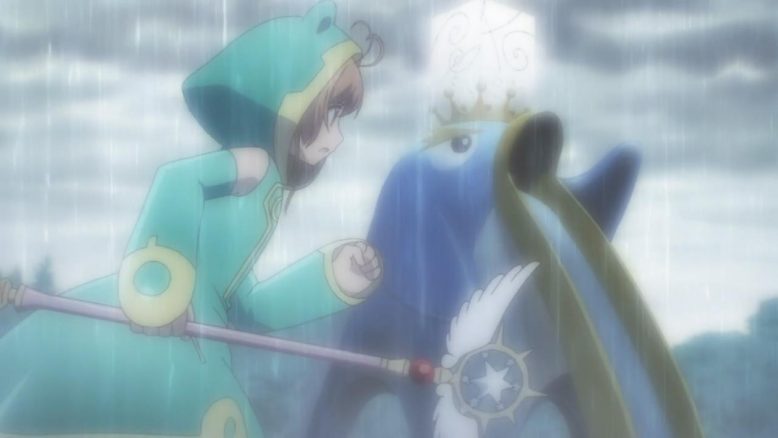 Well… Now that Sakura has two Cards at her disposal, the options for the magical confrontations themselves are a lot more expansive. On that note, I loved how the show had Sakura use Gale to figure out where the rain was coming from when she came face to face with the Aqua card. Then using Siege to trap the card itself? Awesome. And while there’s nothing earth shattering about what Sakura does this week, it at least, has her use her new found powers and cards in interesting and logical ways.

Not just once either, the show repeats the same process again when Sakura runs into the reflect card. Its done just as masterfully here as well. There’s just something fascinating and interesting about seeing Sakura really dominate these new challenges in the way that she does this week. It feels more natural and definitely builds on the events of the first series. Sakura isn’t a newbie, she’s someone who sealed and then converted every one of the original clow cards. She’s a veteran at this by now, and her command on the situation should and does reflect that. 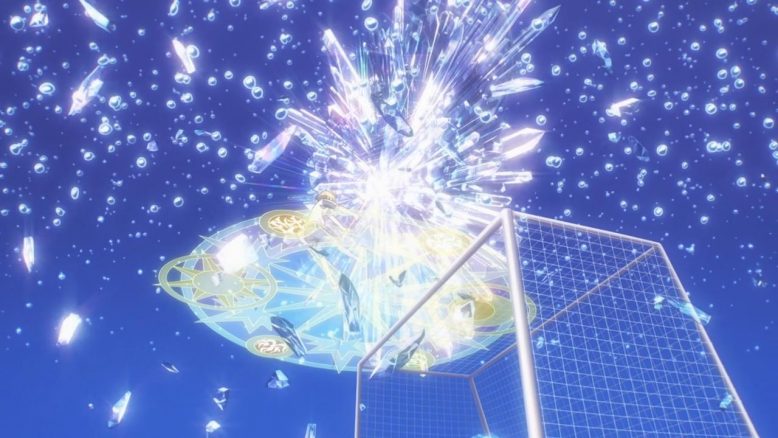 So yes, my big issue from last week was totally addressed by the show. As a result, I really did feel that tinge of nostalgia that I think the show has been going for since it began. That feeling of Sakura running into another magical challenge as she goes through her daily life, and then seeing her surmount it, was familiar in a really entertaining way.

But… As I’ve said before, if a show just gives us more of the same, then its nothing more than a cheap rehash. That’s one of the criticisms that many movie going fans levied at the Stars Wars movie from two years ago,The Force Awakens. While I think that particular movie needed to go back to the basics to restore some faith in the franchise, CCS was never in that kind of situation. So, when the show opened up with two episodes giving us an eerie sense of the familiar without anything new, I didn’t take too well to it. 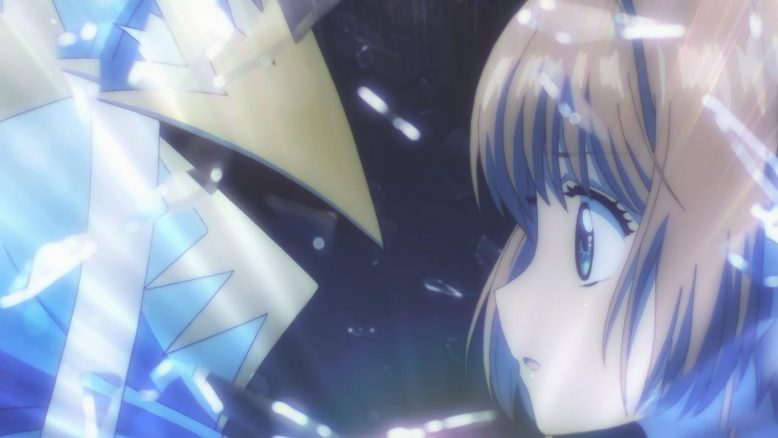 Well, I’m happy to admit that I may have jumped the gun there, because the show is really ramping up on a sense of mystery that I don’t think I’ve seen from the franchise before. There’s always been a sort dream sequence or vision that Sakura’s had, but its been more of a plot device to create a sense of mystique, rather than anything more concrete.

This time? Well, Sakura’s visions aren’t just visions or dreams, they are actively part of the real world. The figure that Sakura’s been seeing? She/He actually exists, and now with the hints that Sakura is dropping, its really starting to become the focus of my attention. Who is this hooded figure? Why is she/he the same height as Sakura? Is it Sakura herself? A different version of her? Is it someone related to her family or Clow Reed? I’m not sure, but the sense of anticipation regarding the identity of whoever the mastermind is behind all of this, is through the roof. 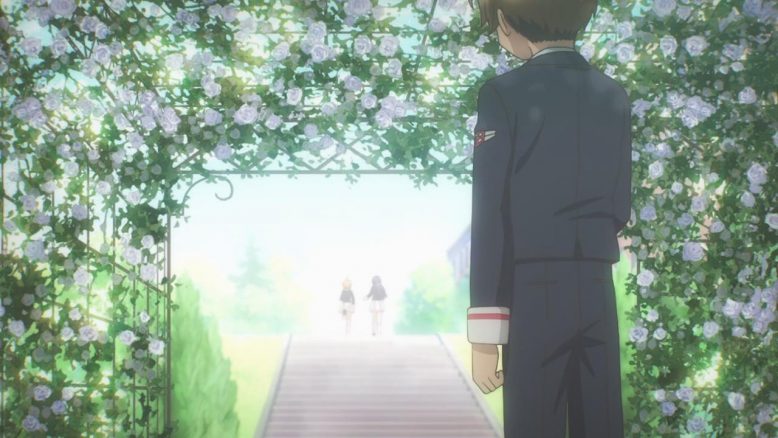 And if that weren’t enough, there are other ancillary mysteries that are equally intriguing. Syaoran’s weirdness has gone past the point of eerie, and now at least to the audience, its quite clear that he knows something. What is Syaoran hiding? Why is he hiding it? More importantly, is this even Syaoran? I mean… For all we know this Syaoran could actually just be another card posing as the character we’re so familiar with.

Which, is crazy to think, but the show has created such a sense of wonder, that my mind can’t help but jump to all these crazy theories. And… In addition to that, we also got a scene with Toya mentioning some “new thing” that he may be able to do. We also know that said thing probably isn’t all too great, because of the sad way in which he personally reflects on it. 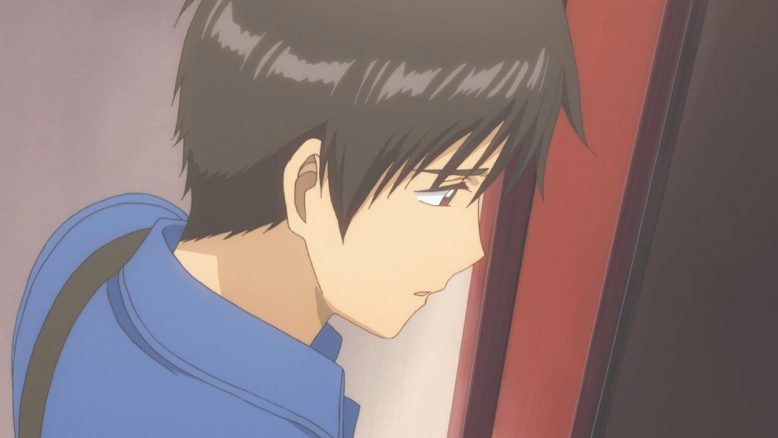 “When the times comes, you’ll find out” are some really ominous words, and its surprising to see them come from Toya with regards to Yukito. What exactly is he able to do? And what consequences are they going to have for him?

There’s a real sense of the unknown coupled with a bit of dread that the show is building up quite skillfully. And with that, we’re getting the nice moments of Sakura being her cheery self, and Tomoyo engaging in her own crazy antics as well. The two best friends and their dynamic really keeps the show from feeling too dark or dire, and is a nice contrast to the general sense of unease and mystery that the show is actively bringing to the surface. 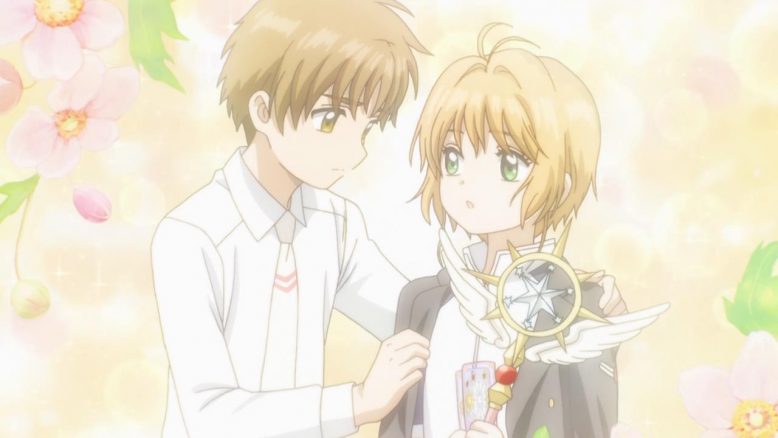 Couple all of that with the generally heart warming moments between Sakura and Syaoran, as well as the fun lunch scenes we get between them and the rest of their friends, and I think the show really has the formula down. The slice of life works, the romance works, the magical aspects of the show work. Card Captor Sakura Clear Card-hen is now finally firing on all cylinders.

Which, more than anything is something I’m really happy about. And the best part? Not only was this week’s episode really good, but it also created a sense of excitement and a yearning for whatever is coming next. Which, incidentally, wasn’t something I expected to say a mere week ago, so props to the show for not only fixing its flaws, but totally upping the game in a truly impressive way. So… in closing, the last thing I’ll say is this: Card Captor Sakura, its great to have you back.