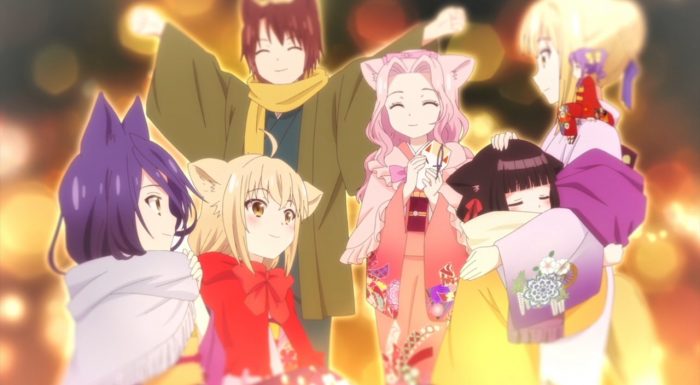 At this point it really is starting to seem like they can’t bring Yuzu anywhere without her somehow stumbling into another world or another time or almost crossing over into the afterlife or something. Maybe they should keep her on a leash. Yes, Satsuki had that one dangerous encounter back in episode 2, but Yuzu has been doing this over and over again. I have to wonder what is it about this girl that makes her so prone to this sort of event. 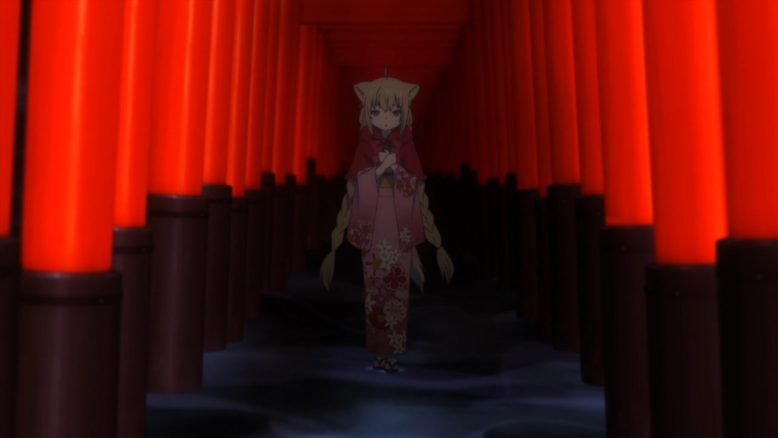 It’s Yuzu’s discovery of the scroll while cleaning out the attic in Konohanatei that sets all this off. Left in a box of Okami’s stuff that’s been in storage for centuries, it catches Yuzu’s eye, and she chooses to hang on to it to find out more about it, rather than throwing it out with everything else from the box. Certainly I would rather find out what’s in a box rather than just say “we haven’t needed it in forever, so let’s just get rid of it.” Say what you will about how sensible or not that attitude might be, but there are certain things you might want to have or hold on to, even though you don’t necessarily use them regularly. Once Satsuki identifies it as a kenzoku scroll (kenzoku apparently being a special group of people who work at shrines), the girls decide to bring it with them on their new years visit to see what they can find out. 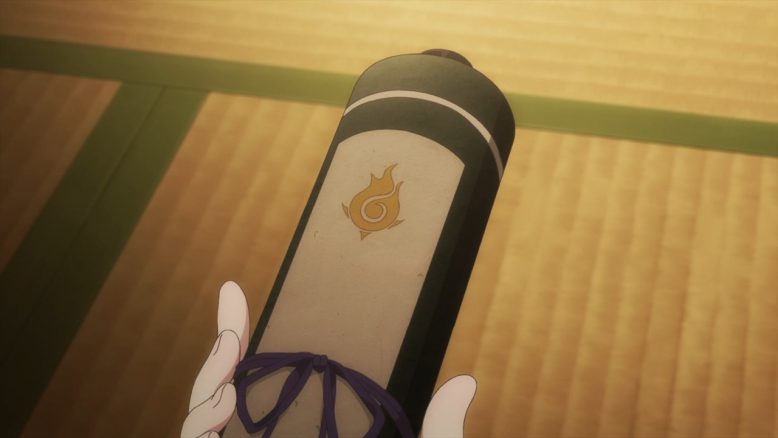 It’s always rather heartwarming to me to see just how happy Yuzu is with her life at Konohanatei. She is such a little fluffy ball of goodwill, it really feels nice to see her using her new year’s wish to thank the gods for bringing her to all her new friends. 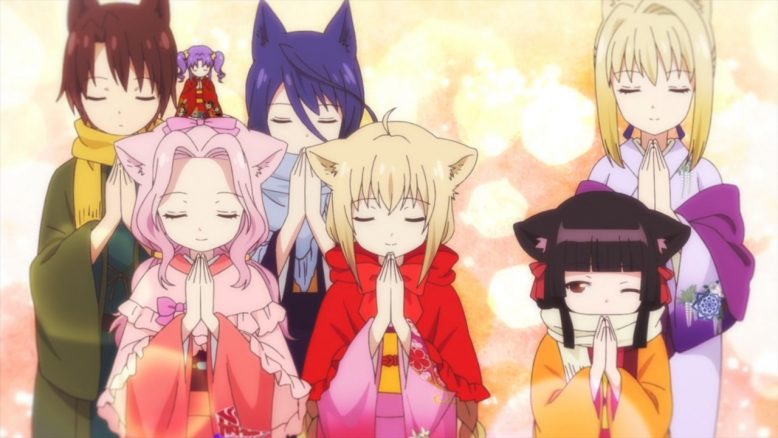 Of course the fluffy feeling doesn’t last, as a chance(?) mishap results in Yuzu somehow wandering in to the path of the gods: a pathway through time and space that the gods and their servants use to reach all their places of worship quickly. It certainly looks fairly creepy: filled with strange colored mists, many shrine gates, and lots of people rushing past like ghosts, complaining about how busy they are. A passing kenzoku sees the scroll Yuzu’s carrying, assumes Yuzu is another kenzoku herself, and pulls her along with her until they fall out of a strange mirror in a large room at… well, actually I’m not exactly certain where they end up. Perhaps inside the Fushimi Inari shrine in Kyoto? That is where Inari Okami is supposed to be enshrined. 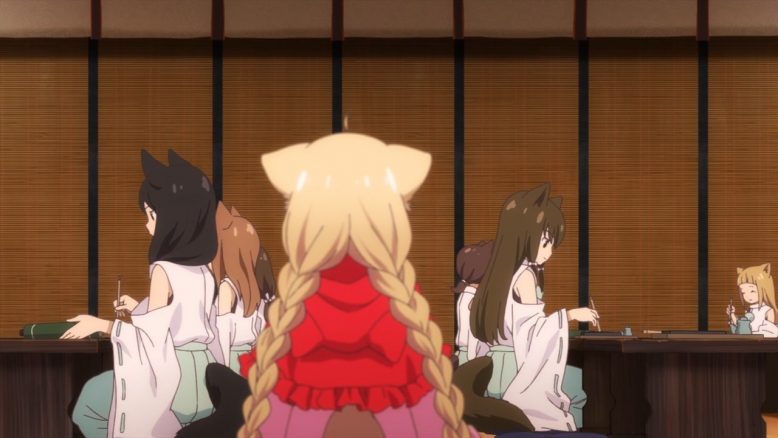 The whole organization of kenzoku is actually pretty fascinating to me. Speaking from the perspective of the series, where one takes it for granted that gods and other supernatural beings and powers exist, one would generally assume that the gods would directly answer the prayers of their followers using their divine power. I hadn’t expected to discover a whole organization of semi-divine beings working behind the scenes at the shrines, basically answering most of the prayers and wishes themselves, if they deem them worthy. I assume that prayers that are beyond the power of the kenzoku but still considered worthy would be brought to the god themselves, although in this case Inari Okami seems more interested in planning a vacation than answering prayers. Still, seeing the whole process, with a room full of fox girls writing down prayers on scrolls, and others running about answering the ones that are deserving, is a rather remarkable sight. 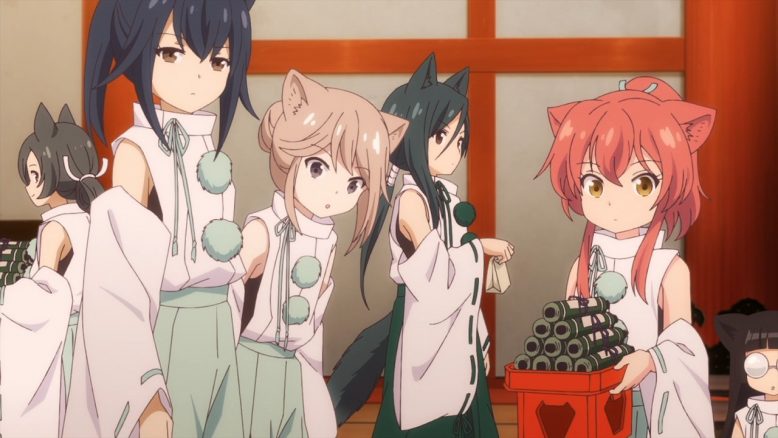 Yuzu’s experience when she steps up to take the place of one of the scribes who collapses is quite interesting as well. As she immediately discovers, the scribes don’t just hear the prayers and wishes of the people, but also know the hearts of the people who are praying. For a moment Yuzu is nearly overwhelmed by the darkness within the hearts of some of those praying, their hearts radiating selfishness, malice, and bitterness. But just as Human hearts can cling to evil, so too can they carry goodness and purity, and a crowd of people offering selfless thanks for the help given to them by the god and the kenzoku quickly help Yuzu out of the shadows again. The scene is short, but the feelings come across strongly. 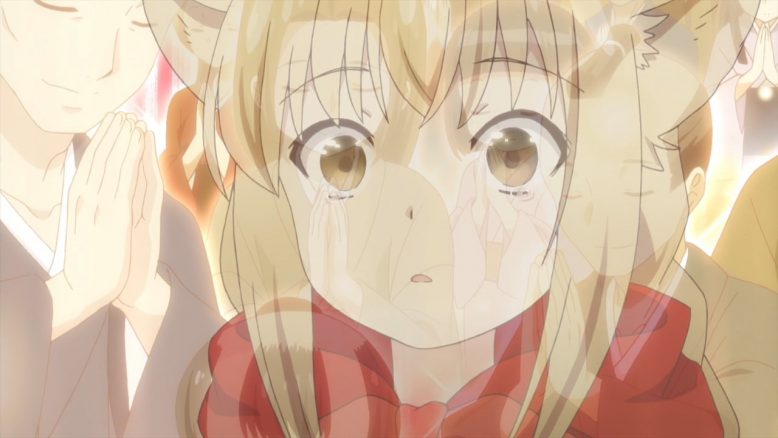 Anyway, after some conversation with the kenzoku, it turns out that Yuzu’s trip through the path of the gods ended up bringing her back to a time before Konohanatei existed. Now, I know this series is too fluffy for there to be any real worry of Yuzu being unable to go home, but to see her getting upset about it is still not fun. Yuzu should never be sad. While all this is being discussed, Yuzu learns more about the kenzoku who brought her there, named Tsubaki. Apparently Tsubaki lost her home shrine when she was a child, and has been moving around from shrine to shrine ever since, never really having a place she can call home. Yuzu, for whom Konohanatei has become her true home despite her short time there, clearly feels strongly about this, and takes a blank scroll to write something in. 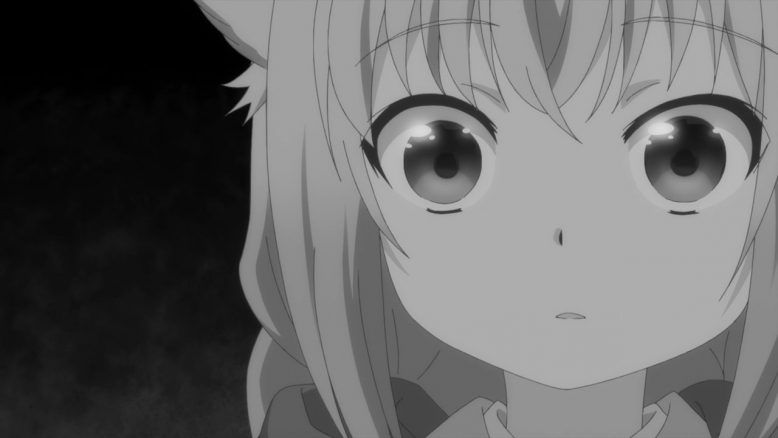 And here’s where things truly become interesting. Back in the present, while Satsuki is searching with increasing desperation for Yuzu, Okami, the only one left at Konohanatei, walks into the empty room where every ate together, and mutters to herself, wondering how late those kids are going to stay out. At that moment (assuming you can say that about an event that happened centuries in the past) the scroll that Yuzu has been carrying with her all this time begins to glow. Tsubaki reaches out to it and it unseals at her touch, and somewhere from within it a voice calls to Yuzu, telling her to come home. And it was here that I finally began to realize just how much of a delightful paradox this scenario is. 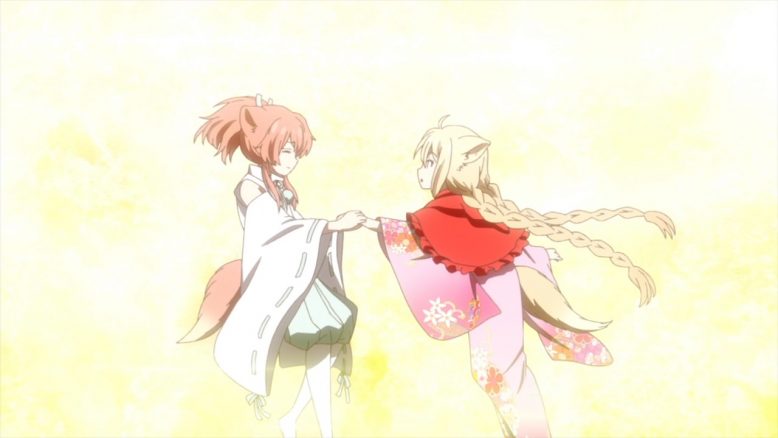 I never would have expected it, but as the episode wraps up we see undeniable proof that this whole thing is, in fact, what’s known as a causal loop. Tsubaki is (or rather will be) Okami. Her encounter with Yuzu plants the idea of a hot spring inn that serves gods in her mind, and she eventually leaves working as a kenzoku to found Konohanatei. The scroll Yuzu wrote on was her wishing for Tsubaki to find a home. And Tsubaki, in thanks, writes her own wish: that Yuzu will always find her way back to the people waiting for her when she gets lost. So, Konohanatei exists because Yuzu traveled back in time and gave the idea to Tsubaki, who eventually founded Konohanatei, let it grow and change until Yuzu would come to work there and eventually reach the point when she would travel back in time and get it all started again. It’s the sort of self-contained time travel event that I prefer when it comes to such stories. 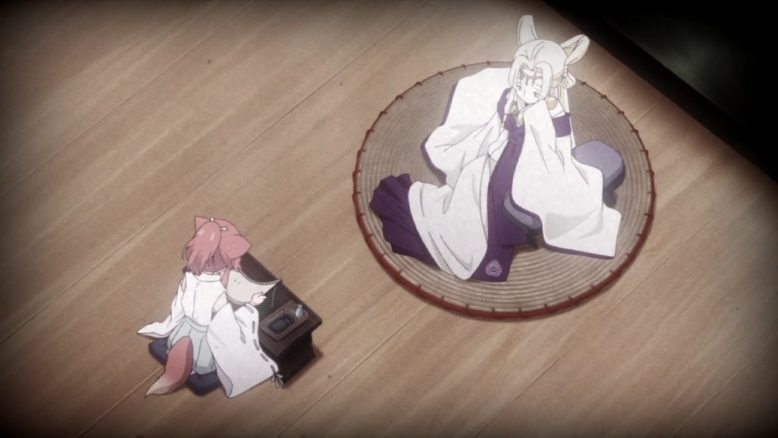 And so Konohana Kitan comes to an end… at least for us. The final scene makes it clear that our sweet, somewhat clumsy, but altogether delightful newcomer fox attendant is far from finished with her experiences in the strange and wonderful Konohanatei inn. I wish her well, and hope that someday I will be able to see more of her story, and the many many other stories of the inn where gods and spirits and people from another world and sometimes just folks who were passing by stop in to stay. I’ve enjoyed this series quite a bit, and I hope those of you reading have been able to do so as well. 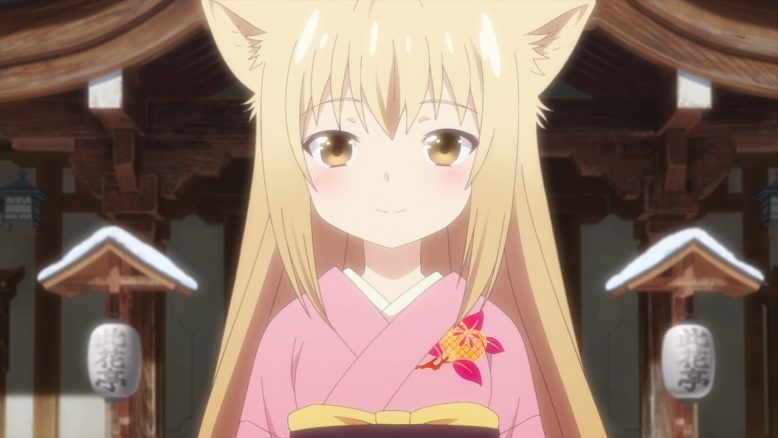 (PS: my apologies for the lateness of this post. First I was away on vacation for the holidays, then there was a blizzard when I returned that kept me busy, and then I found myself suffering from a bad case of writer’s block… Getting this finished turned out to be far more difficult than I anticipated.)