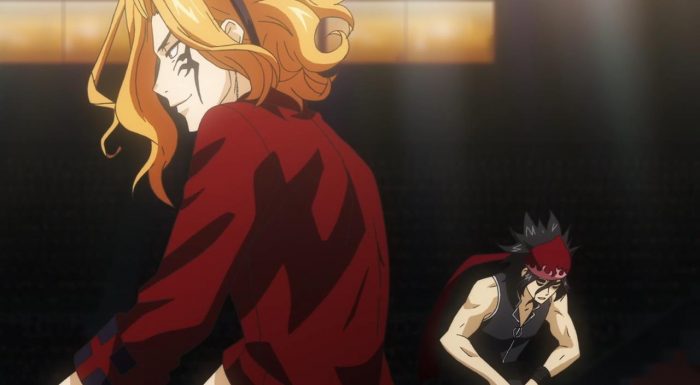 Lest we forget, Shokugeki no Soma is most definitely a show about cooking and food. After a few weeks of setup, and more… Dramatic over-the-top scenario building episodes, we finally got a good old traditional Shokugeki episode that focused primarily on the cooking and the food. If nothing else, I think the show needed to present an episode like this one, given the huge demands its made from its audience, ever since this third season started. 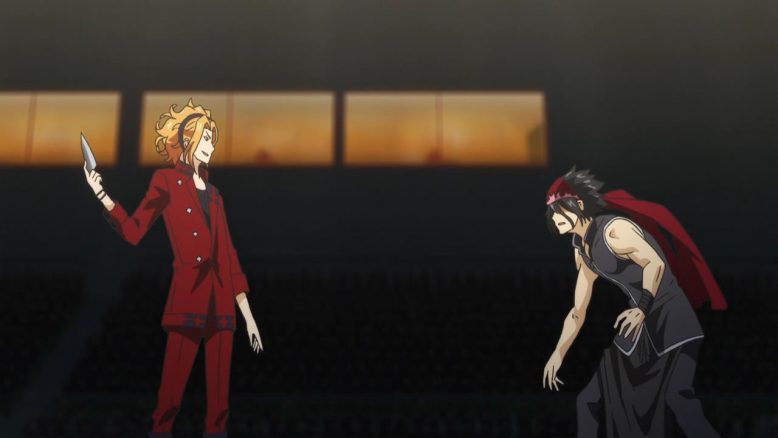 It really has been a good while since we’ve seen Shokugeki no Soma, the anime series, spend an entire episode focusing on a single idea or plot point. While the Moon Festival arc focused more or less on the entire swath of what entails a food festival, this latest arc is actually bringing us back to a more familiar formula. One, that I think, this third season’s speed actually supports and augments, rather than works against.

This is the first episode, of this third season, that I’ve felt had immaculate pacing. And that perfecting pacing, lead to an episode that was riveting, exciting and mouth watering. Now, while its easy to just say that this week’s episode was so good because of how it focused on one particular Shokugeki, I’d actually say that there were a few more reasons for why this episode worked so well, in particular. 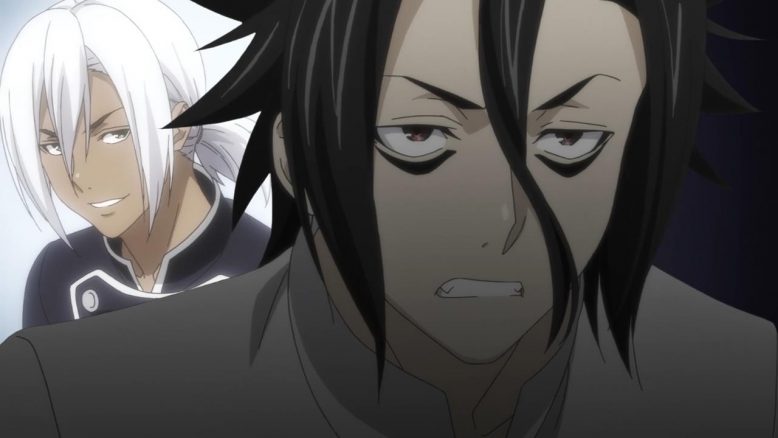 The first, was undoubtedly the fact that Ryo is just an unknown quantity. He’s talented for sure, and he’s held his own against Soma and Hayama, but you never can really tell if he’s actually going to win or not. Ryo has this whole gar-ish vibe to him, and he really uses brute force to overpower and impress the consumers of his cooking. Its a style, that I think, is always being balanced on a razor’s edge. Go even a little bit over the top, and you’re going to create a mish mash of flavors that simply won’t work.

So Ryo, as a main protagonist for this specific Shokugeki, wasn’t a sure-fire win. He’s no Soma, and I think the fact that he could’ve just as easily lost in service to the plot, made for an interesting sense of tension. If you wanted Ryo to win or lose, you were automatically invested in this week’s cooking bout. And investment, unpredictable and tension, are hallmarks of a solid and entertaining competition even before a story. 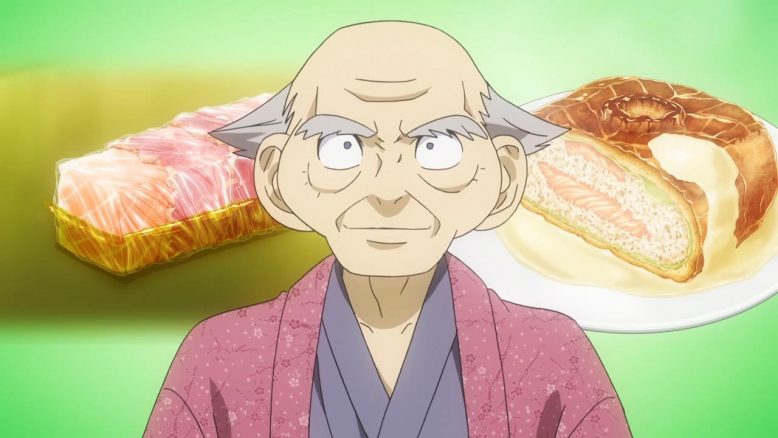 So we had that, but another thing that really helped this episode was the clash of cooking ideologies that’s starting to become a running theme in this show and franchise. As I’ve mentioned twice already, the cooking took center stage this week, as both Ryo and newcomer Rentaro prepared a dish that featured Salmon as its key and title ingredient.

And I’ll be honest, both dishes did look pretty darn amazing, and the approaches were both interesting. But it was in the approach, that we came upon a real idealogical difference, one that I think even the show itself didn’t spell out. See Rentaro leveraged a Convection Oven and used his “mastery” over heating and slow cooking, to create a really simple, elegant and finely tender salmon raped in bacon dish. 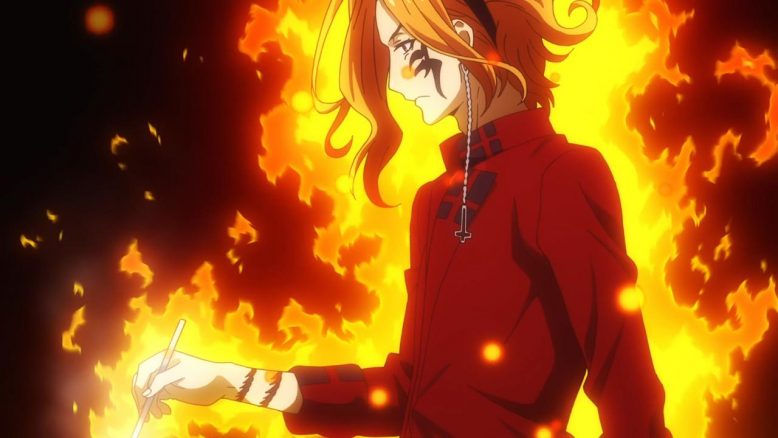 Cleverly, we’ve already seen new technology and techniques like the convection oven in the show already. There’s a huge movement these days to use water bath heating and tools like convection ovens to create really tender and awesome meat. But, despite the novelty of it all, I’m sure it was pretty obvious as soon as Rentaro’s dish came into focus, that it was nothing all too special.

Sure, it looked nice, but there really wasn’t anything all too impressive or skillful about Rentaro’s work. See, anyone, with the right tools and a good set of instructions (i.e a recipe) could make what Rentaro made. There’s nothing artistic about what he did, there’s no self expression, care, or creativity in it. Its just taking the ingredients, heating and cooking them to their optimum level, and then serving that food as quickly as possible. Even a guy like me could probably do what Rentaro did. 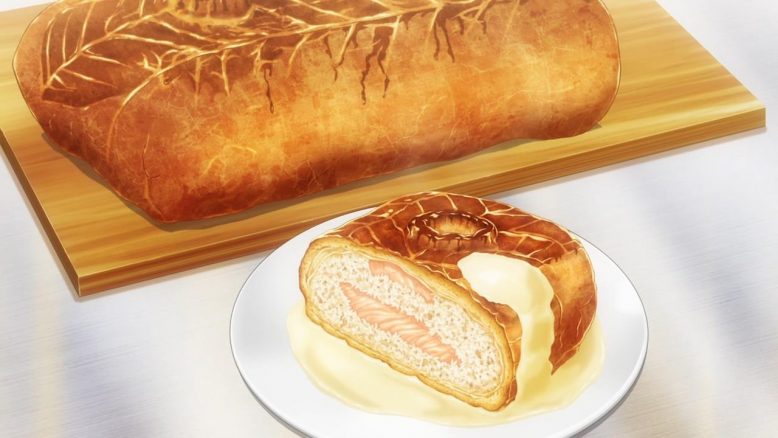 Ryo on the other hand? He made something truly special. Ryo actually crafted an experience of a dish, using his previous mastery of seafood cooking and flavor mixing, with something that he had never been able to do before; seasoning via spices. For Ryo, his “Coulibiac” marked a real evolution in his cooking. Prior to this match, Ryo has always just kind of smashed things together, using his instincts and sense to create a glut of flavor.

Using the spices, the spinach layering and the crepe like format for the “Coulibiac”, felt like a real level up for Ryo. It also felt like it just took more work, creativity and was something truly worth experiencing and looking at. I’ve always been a huge fan of Ryo’s cooking in particular, (mostly because I’m a huge fan of seafood), but this was a dish that really made my mouth water. 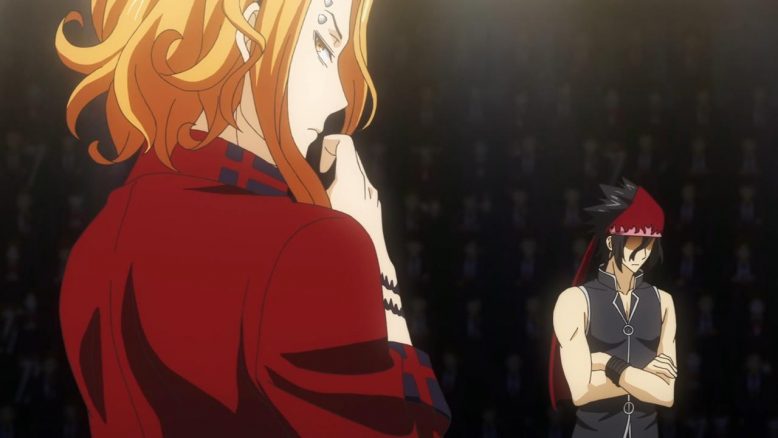 So… In essence, what we got here, was novelty and diligent but standard use of materials and tools, versus exploration, creativity and craftsmanship. And as this show has argued for, repeatedly, its just most interesting, mesmerizing and downright appetizing to see a product that’s born from experimentation and creativity. As anyone who actually gets into cooking will tell you, the real fun begins when you move past the basics and starting really trying out new things and ideas that just birth themselves in your head. 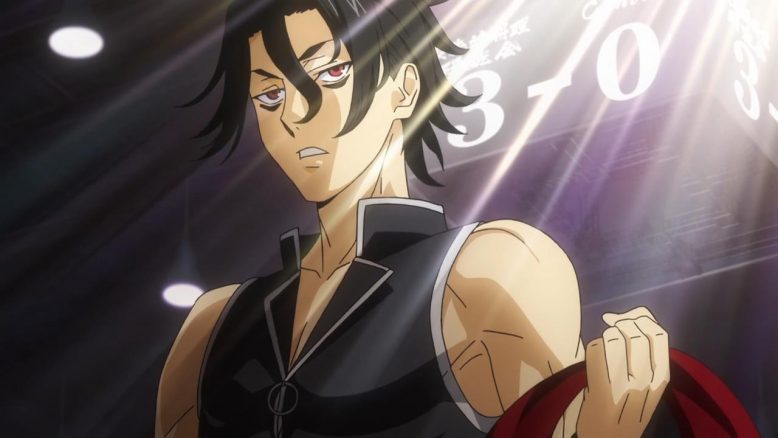 Which, incidentally, is the mantra that the show’s primary characters all focus in on. Its Soma and his friends who are fighting for originality and innovation in cooking, rather than just following tried and true “safe” recipes. Central, in contrast, is all about following a standard, generic way of doing things, which I think, to the show’s credit, is a pretty interesting and cooking related conflict.

Its obvious which side should win, but I think this whole scenario is something that really does feel like its at least based on reality. I can totally see certain chefs, cooking schools of thought e.t.c, believe that following a certain collection of traditions and practices, is the best way forward. And while this conflict itself isn’t exciting for as many viewers and fans as it is for me, I think we can all agree that this was simply a great cooking battle episode. Sometimes, that may as well be all Shokugeki no Soma needs to do.