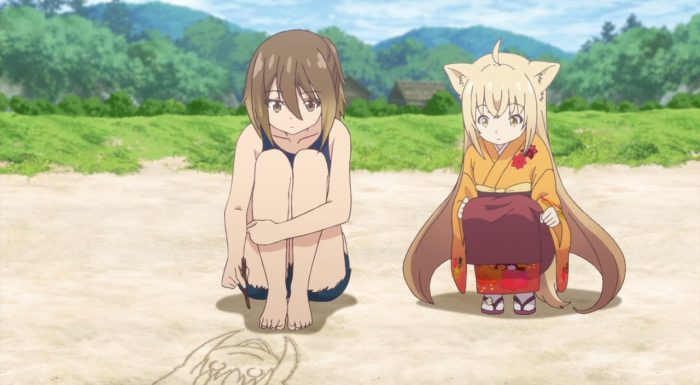 This episode is quite interesting, in my eyes, in the details it gives us about Konohanatei and its connection to some of the people who pass through it. We already know that those who are dead may pass through and have an experience that better prepares them for the afterlife, that gods (or at least, residents of the heavens) can come stay there as well, that ghosts can easily arrive there, and many other such things. Yet people who are not… “existentially challenged” shall we say, are just as capable of staying there, and then leaving to return to their lives afterwards, so it is not just an inn for the supernatural. It is not the afterlife, nor a form of purgatory, although some of the services it performs could serve the same effect as the latter. It is a place that lies on the border. It touches on the world of Humans and the world of the gods, on the world of the living and the world of the dead, on the natural world and the supernatural one, and all such similar things, and could be said to be part of all of them, while simultaneously not truly belonging to any of them. 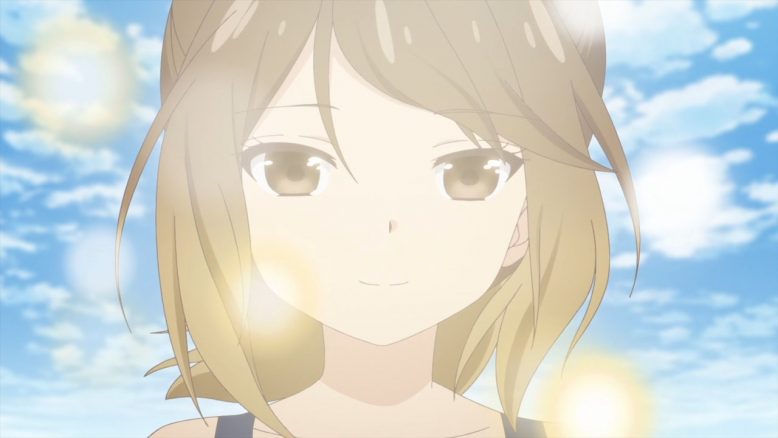 This week, our first unusual visitor is particularly unusual in that she doesn’t seem to come anywhere near Konohanatei itself. In fact, I’m not exactly sure where she was, or how Yuzu got there, since she was on a beach by (what appeared to be) an ocean, and Konohanatei is in the mountains with no sign of any large bodies of water anywhere around. Putting that aside, a girl lying soaking wet on a beach, unconscious, wearing somewhat abbreviated clothing, would probably provoke some degree of concern from most people. 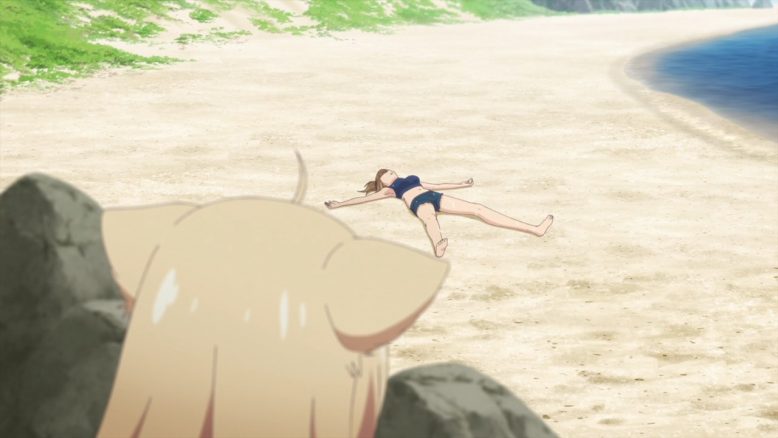 As it turns out, there’s a bit of a story behind how she got there. Her first lie is actually somewhat believable: quite frankly she looks about like what one might expect a shipwrecked survivor to look like. Her exhaustion, her skimpy clothing, and being soaking wet, all make sense with that story. I don’t blame Yuzu for believing that one. Of course, when Yuzu tries to offer her the manjuu she’s been saving, the girl quickly relents out of guilt and admits that she was lying. Whatever else you might say about her, she’s not actually trying to take advantage of anyone by spinning these tales. Her second story about being a lost mermaid is quite a bit less believable, although for all we know it’s entirely possible with all the nonhuman creatures that pass through the town around Konohanatei. Still, Yuzu immediately believing the second tale as well is just… well… very Yuzu-like. 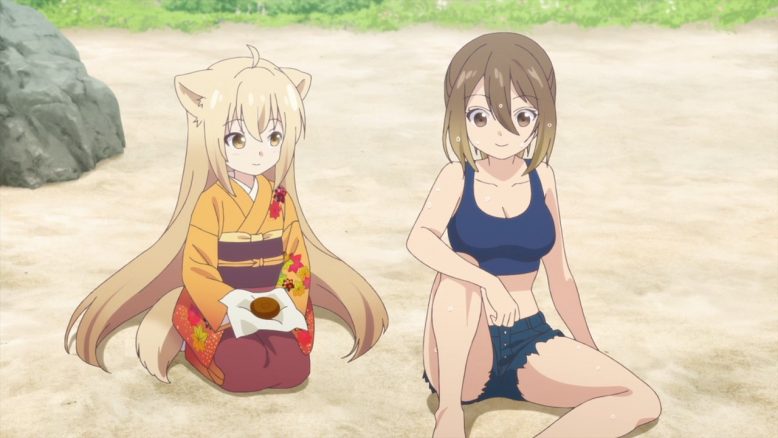 As we discover, this girl has a tendency to make up stories like this. This has alienated people around her, who think she’s strange, or who believe she’s telling lies to try to get attention. But the truth is that she simply finds the ordinary world to be dull and unappealing, while the world of her imagination is colorful and exciting with unlimited possibilities. You can call that childish if you want, but one might ask what is it we’re doing when we watch anime like this, if not enjoying a story that we know isn’t real, but which we (for a time, at least) enjoy more than doing something else? I can certainly sympathize with her. 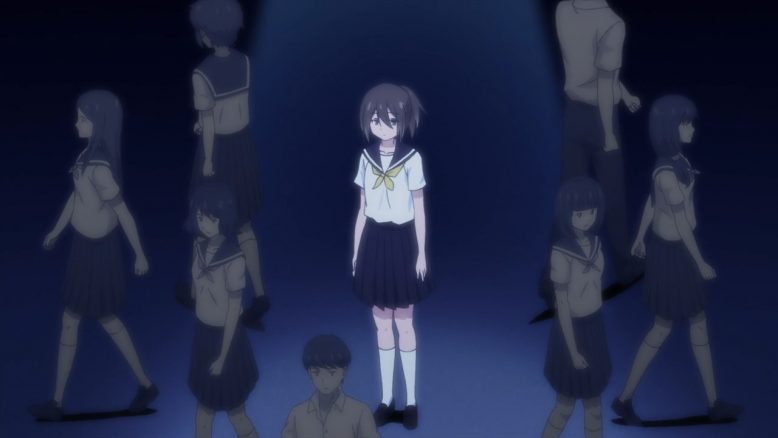 However, it turns out that her fear of an uninteresting unchanging life where she just goes to school each day and eventually grows up just to mindlessly trudge to a soulless job everyday has become more powerful than she can bear. As she turns away from Yuzu and starts to walk out into the sea, a suspicion that has been lingering in my mind pushes its way towards the surface. I suspect Yuzu realizes something similar, because she quickly grabs the girl’s hand. And I, for the most part, have to agree with Yuzu. The girl isn’t crafting tales that will harm anyone or take advantage of them. She is simply trying to make the world around her seem more fun. With Yuzu’s words, and a promise that she has someone near her who can enjoy her stories as well, the girl fades away… and wakes up on a different shore, to find a classmate from school bent over her with tears in her eyes, calling her name. 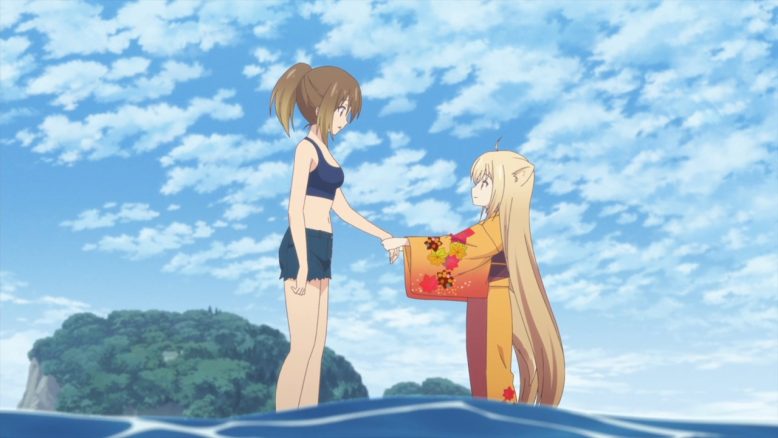 Judging from their conversation, it’s pretty easy to understand what’s happened. Our girl, Matsumoto, has been falling into depression, and lately she’s lacked the will to even go to school. Her classmate, Tanabe, has been worried about her, and came looking for her on this day to bring the handouts from class, only to find Matsumoto’s shoes sitting abandoned at the top of a cliff by the sea. For those who aren’t familiar with this, that is a pretty explicit sign of a suicide attempt. Fortunately she didn’t succeed, and more Tanabe turns out to be the person Yuzu promised Matsumoto she would meet: someone who could find her stories fun to listen to without judging them. It seems Yuzu’s intervention has helped Matsumoto find the path she’s been looking for. 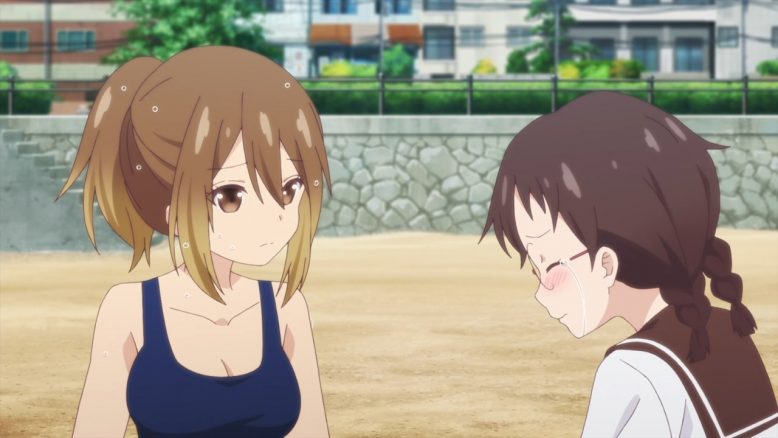 The second half of the episode focuses on two characters: a young boy who “wandered in” to Konohanatei, and a middle-aged man who’s insisting on staying long than he’s supposed to. The boy’s case seems particularly strange, until you get to the end of the episode and realize that we’ve been seeing him all this time as he sees himself, rather than how he really is. Certainly before then you’d get all sorts of concerns about strange child-labor institutions or bizarre cults or whatever else might take a child away from his parents because he’s “been chosen to do great things.” 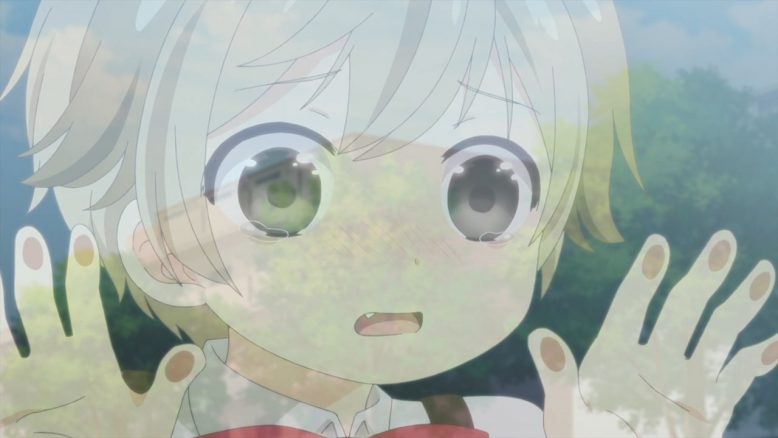 The man… well, we get what’s up with him fairly quickly. He was president of a small trucking company, providing for his family, until he was in an accident. Now he’s in a coma in the hospital… while simultaneously being a guest at Konohanatei. It seems that he’s only supposed to be there for the time that he was meant to be unconscious: his check-out time is the time when he’s supposed to wake up and return to his life. But he doesn’t want to go back and suffer being disabled from the accident. He doesn’t think he can face his family now that he can’t provide for them. Some talking from Kiri, and some innocent words from the boy that cut through to the heart of matters, however, eventually convince him and he walks out and fades away… after promising to see the boy again. 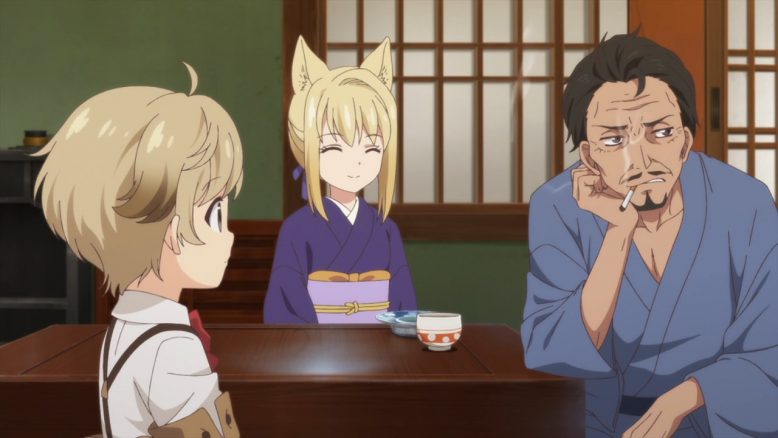 I particularly liked how the final few minutes tied everything together. The boy, it turns out, had actually been a dog the whole time (he appeared as a boy in Konohanatei, and in his memories, because that’s what he saw himself as), and if you go back and look at the real life scenes of him with that in mind they all make a lot of sense. He was being trained to become a seeing eye dog, and eventually was assigned to the man, who had lost his eyesight in the accident that had sent him into the coma. Moreover, the man’s daughter (well, stepdaughter, technically) is Matsumoto-san (first name Rei) who we met from the first half of the episode, and she’s since written a picture book about her experience with Yuzu. Seeing it all come together like that, seeing the proof that everyone got their happy ending, so to speak, makes this episode particularly satisfying for me. 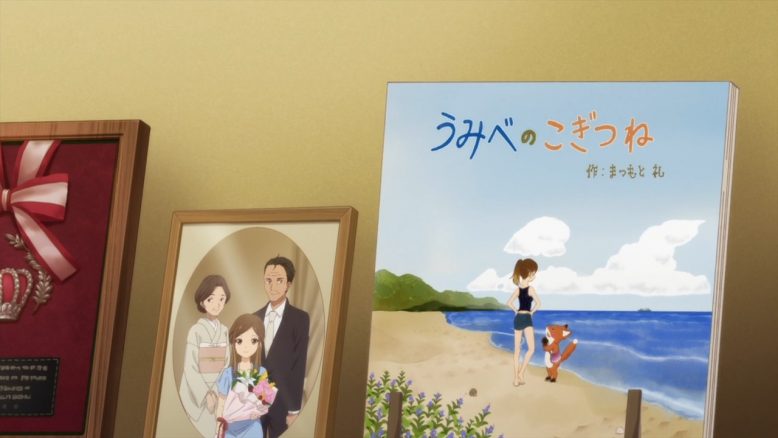 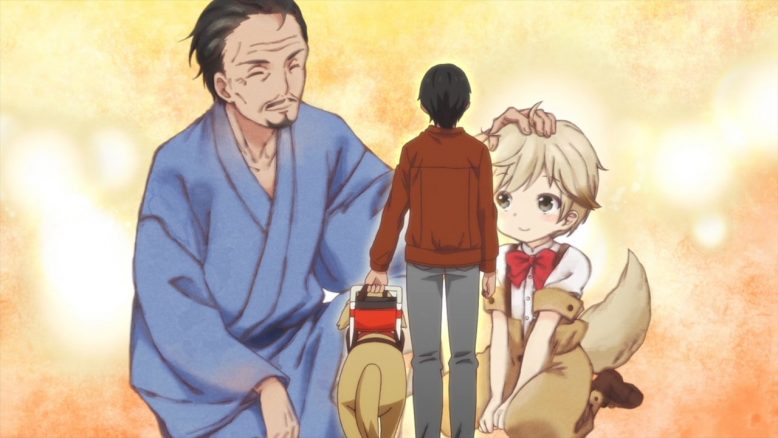 I really liked this episode. Looking at the OP there’s a segment where each of the episodes’ guests appear in sequence. After the sets from this episode, there are three more sets of characters shown, including Satsuki’s sister and her friend at the end. Assuming each set takes one episode, that leaves us with one episode yet unaccounted for. I’m looking forward to seeing what’s coming. 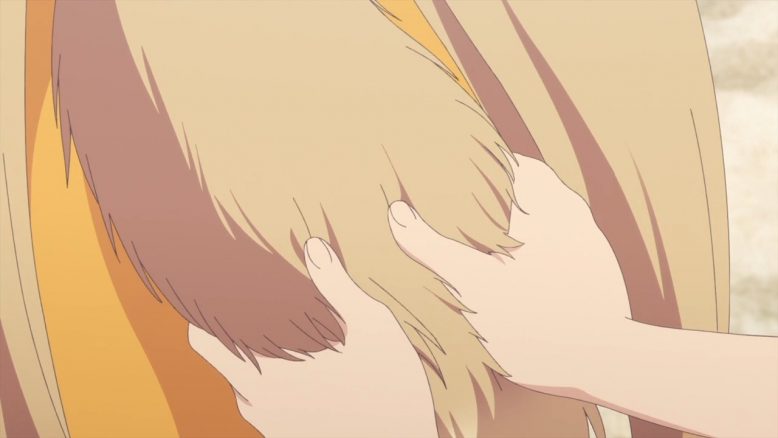 Who wouldn’t want to touch such a fluffy tail if given a chance?