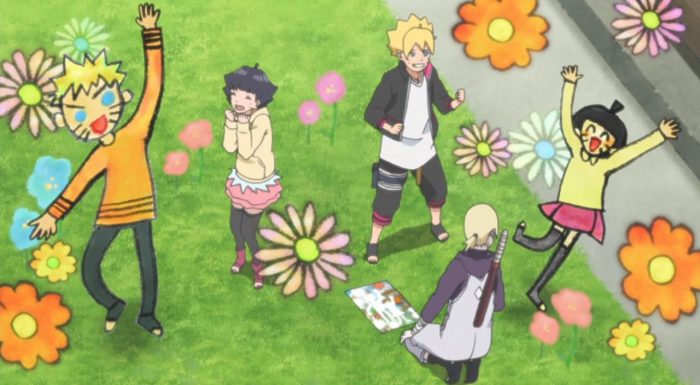 Well, this is a problem. What exactly should am I supposed to do when I feel almost… apathetic to an episode? Its not bad per say, nor is it all too great, its really just kind of there. That’s all I can really say about this week’s Boruto NNG episode, its kinda just there. Its not bad, but its just so childish and so… Simple. Is this acceptable as an anime episode? Perhaps, but unless you’re under the age of 12, I really don’t see what the appeal here is. 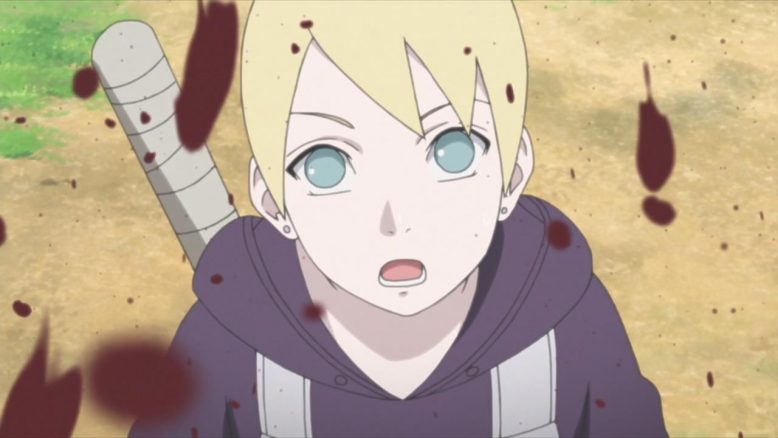 The story this week focuses on Inojin, who is the son of Ino and Sai. Inojin, for his part, ends up making light of his “super beast scroll” justsu, which requires a decent amount of drawing within battle. Inojin, in an effort to optimize everything, decides to copy his drawings before hand, but as Sai quickly realizes (and the audience does too I’d imagine), Inojin forgets the “heart” behind his unique technique. The entire episode is basically Sai trying to explain to Inojin what he’s lacking as the kid slowly begins to lose his grip over his own technique, and its all done in a round about “you have to figure it out yourself” way.

Here’s the thing, the episode itself aside, I actually agree with Sai’s teaching technique, which is a real first for this series. The way Sai slowly but surely guides Inojin towards discovering the truth, is the best way to make a lesson powerful and memorable. Sai doesn’t spell it out for his son, and instead just gives him different opportunities to come upon the answer himself. When Inojin struggles, Sai doesn’t judge him, but just believes in his son. And through every failure, Inojin gets ever closer to realizing what he’s been missing all along. 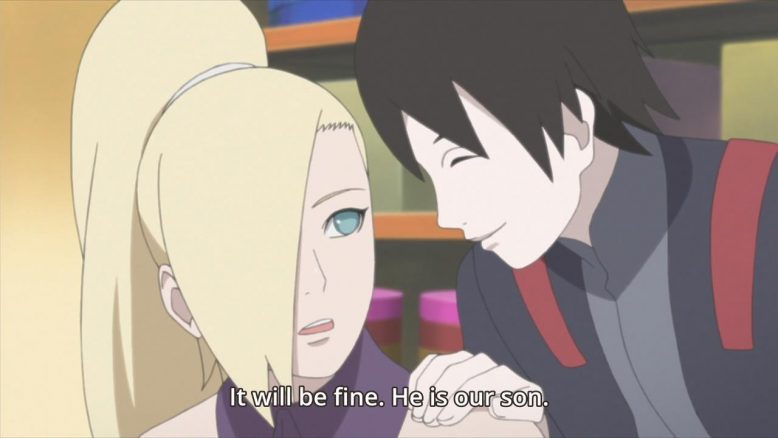 Why is everyone in this series a better parent than Naruto? XD

The story itself is simple, but I think it shows us a way of teaching that we often see in Japanese stories. I like that particular aspect of the story, and how it embodies the idea of failure and learning from it. It also downplays conceit and arrogance, two things that Inojin totally develops at the start of the episode. And by the end of it, as he interacts with Himawari, a sweet little kid with a love for drawing, he’s humbled back into the kind of love for drawing and art that he should have.

That all sounds pretty decent doesn’t it? And I’d say that it is, decent. But this isn’t an original story, and there’s no real twist or anything remotely interesting in here. I’d actually liken the story here to something I’d read in a children’s picture book, or something to that nature. LOVE THE ART! Put in your heart in every drawing, e.t.c. 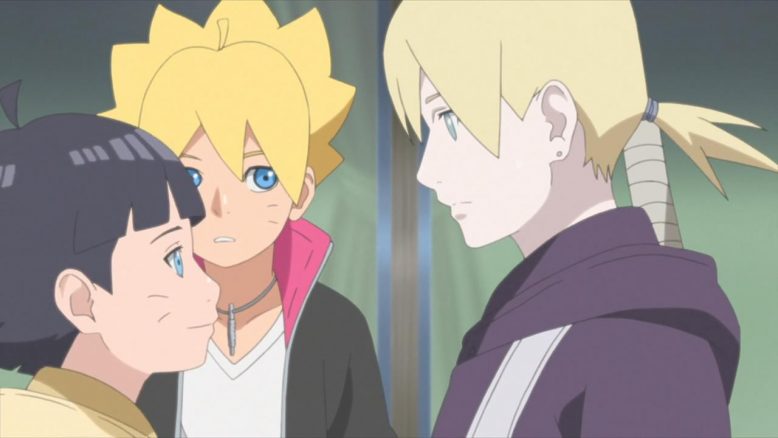 A new friendship is born, one based on a mutual love of ART! #_#

Its the sort of message that I think kids who haven’t understood how life, dedication and handwork… work, will probably gain the most from. This is a story for kids, and I think this week’s episode is a simple kids story that people could probably enjoy with their kids.

Which, I think, continues the odd situation of where exactly Boruto NNG is supposed to be. If this is a kids show, then we definitely can’t have arcs like the Naruto Gaiden arc, or even the story with the Class Rep. Even the last arc we had in Kirigakure, is a bit too dark for a kids show. But then, we get episodes like this, that are clearly meant for a younger demographic. 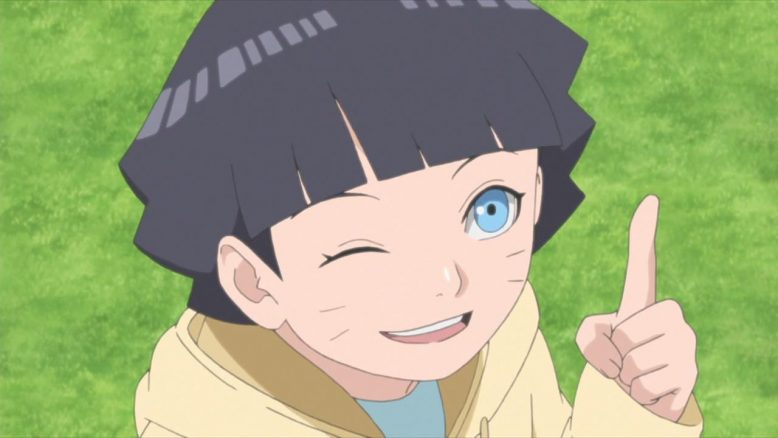 THE KIDS ARE TAKING OVER! O_O

And Look, I don’t hate on kids shows. I actually really love cute kids shows, and am always in tune with my inner kid. There’s nothing wrong with a Naruto show that’s aimed at kids. But if that’s what the show and series wants to do, then it should commit to it. If Boruto NNG is a kids show, then I can safely drop it and move on with my life, but the problem remains that the show refuses to commit to a particular vision.

I’m not sure if that’s weak direction by whosoever is in charge of this project, or if the writing staff that’s writing these fillers just don’t have the writing chops for something actually dark and decent, but I think in any case, what’s happening here is not working. 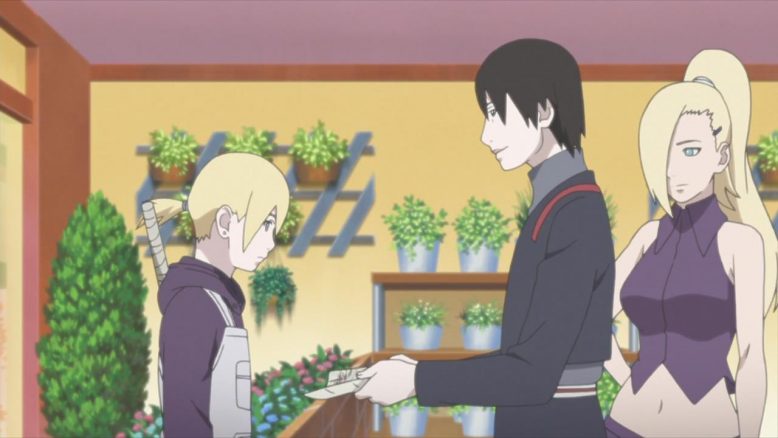 At least we got a nice look into the Sai household eh?

Is this week’s episode okay? Yeah sure. Do you need to watch it? I don’t think so. I think this week’s episode is an example of a decent kid’s filler episode, that most people interested in the Naruto franchise can more or less avoid. Which, I sadly think, is going to be the norm until we get out of filler territory and either go into our next big “arc” or actually start seeing manga content being adapted. Until then, I guess you can either avoid Boruto NNG entirely, or just watch each of these filler episodes as what they really are; cute little side stories for little kids.