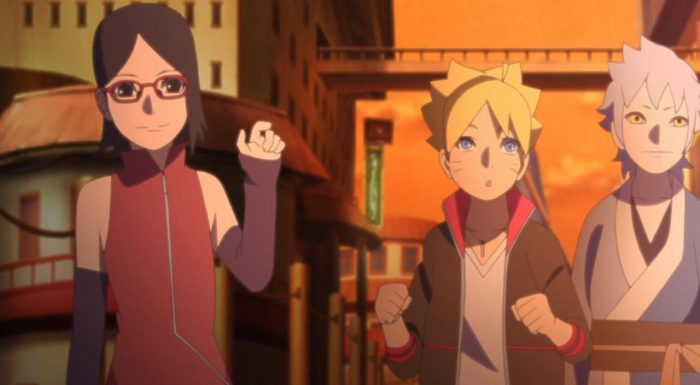 Okay, I’ll freely admit to not expecting to like this week’s episode as much as I ultimately did. When the preview for this week’s episode came up last week, I in fact, remember audibly groaning. Another slice of life comedy episode about something dumb like finding souvenirs? Argh… Needless to say it sounded like Boruto NNG’s focus was getting back to the childish stuff that I’ve not been too enthused with. And that is exactly what happened this week, however…

The interesting thing here, is that if this week’s episode did anything, it actually made a case for that very childish kind of slice of life stuff that I’m not too fond of. The fact of the matter is that whatever my wants and desires for Boruto NNG may be, the show’s writers have a very specific style and focus in mind. That focus, it seems, plays more to their strengths as writers and I think that’s why we’re getting so many character-centric smaller, relaxed, feel good stories as a result. 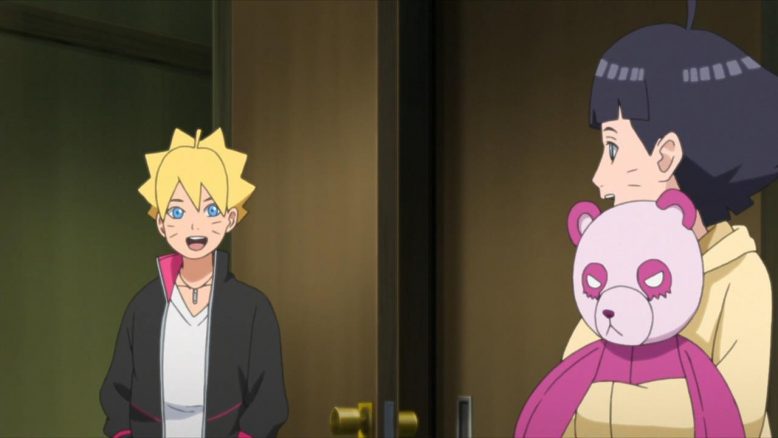 Pink Teddy-chan is NOT AMUSED! >_<

To that end, I actually found this week’s story about Boruto trying to get a souvenir for his sister really endearing. The show focused on the fact that regardless of convenience, Boruto is a kid that will always choose the honest and correct path, whether it happens immediately or eventually.

Which I think, was a good way to frame a nice epilogue for a somewhat uneven arc in the whole Kirigakure field trip story. There was almost a spider-man like quality to how Boruto, Sarada and Iwabe all got reprimanded for basically doing good during their fieldtrip. Much like Peter Parker in western comics, Boruto did the right thing and helped people, but instead of getting credit or being appreciated, he got punished instead. 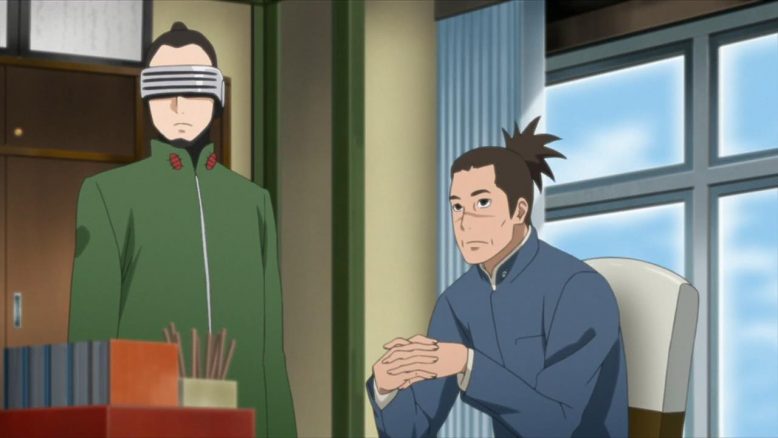 Oh look, its another moment where Shino and Iruka drop the ball….

I’m not entirely sure why the Ninja Academy decided to do that, other than it just made Boruto, Sarada and Iwabe appear even more noble and likable as a result. It also made the teachers and adults look extremely incompetent, as they REALLY had no idea what had actually gone down, and how Boruto and co had basically stopped the destabilization of an entire allied village while on their field trip. If anything, Boruto’s actions have given Konoha some serious clout and goodwill with Kirigakure, and I think if The academy teachers knew what they were doing, they’d applaud those kids.

But sadly, in this show, the adults are the real idiots in the story. Again, I’m not sure if its just bad writing, or if the adults are actually meant to be portrayed as incapable, but If I was running Konoha, the first thing I’d do is sack all three of the “Teachers” in this incident. You could argue that Boruto could actually fess up and tell the whole truth, but Boruto’s a kid and not the adult here. 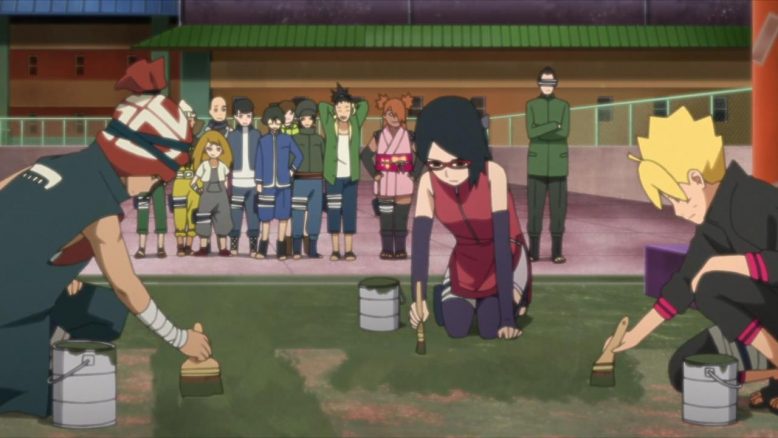 I really hope that’s just green paint… because Sarada is flat out SITTING in it.

At the end of it all though, I still liked how Boruto continues to be the sort of character that continues to do good, but does so in the shadows and the sidelines. We saw that with the whole Class Rep arc, and now we’ve seen it again with Kagura and the Kirigakure arc. I mean, at the very least, we find out that not only is Kirigakure stable now, but Kagura himself has moved forward and sends a nice little letter to Boruto as an apology and thank you. The stories we get, that involve Boruto, are just a lot more personal.

Thus, in many ways, I’d say the series is doing a really good job of differentiating Boruto’s heroics from those of his father’s. Naruto always stood out and was very public when he did acts of good, and eventually, was more or less thanked for it. Boruto, thus far, has done some really cool things, but only a select few people actually know of said things. Which is fine I think, because it gives Boruto NNG its own distinct kind of storytelling style. 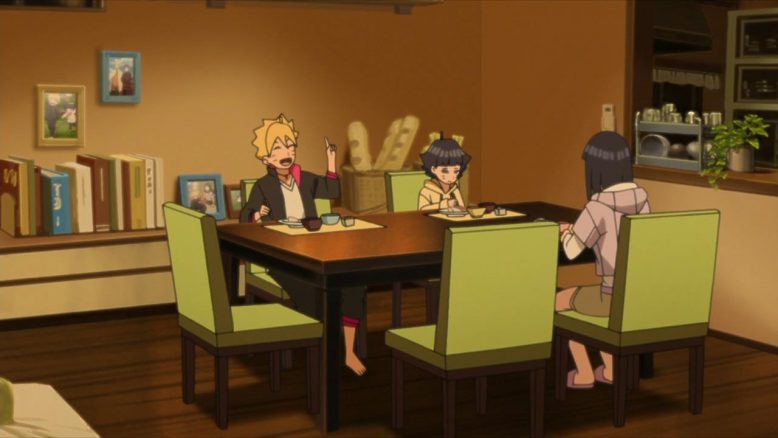 A typical dinner at the Uzumaki house hold – Always Naruto-less.

And speaking of differences between father and son, I love how the show continues to show us a side of Boruto that we rarely if ever saw with Naruto; his family. See, while Naruto was always the hero of the village, dealing with earth shattering events and what not, the guy never had to deal with issues like unhappy family members or forgetting to keep promises.

But we see that sorta stuff with Boruto. Boruto, in this week’s central story line, forgets to bring his sister a souvenir and then rushes to make things right. A different person would’ve probably been like: “Well yeah, SORRY I didn’t go and get YOU a frigging present. I was busy saving the whole Kirigakure village from collapse”, but Boruto doesn’t do that. 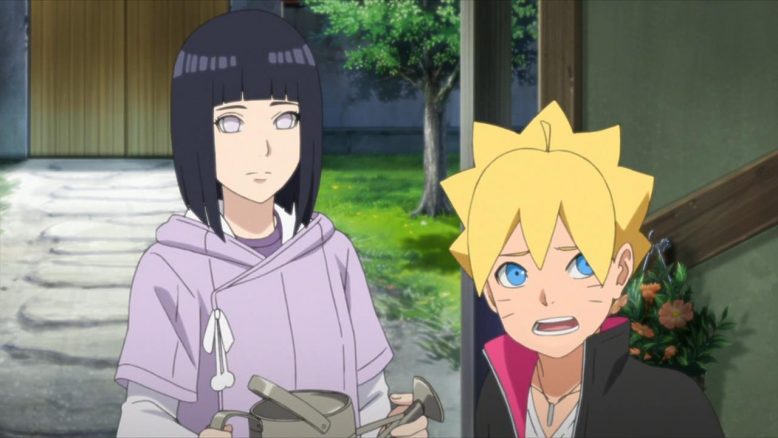 That moment, when you realize you REALLY messed up.

To Boruto, the fact that he forgot a promise to his younger sister is super upsetting to him. He NEEDS to make it right, and rushes to it, because family is something that’s super important to him. There’s obviously the reaction to the way his father, Naruto constantly sidelines his family, but there’s also just that sense of trying to be a big brother, that I appreciate in this particular episode.

And of course, the story really does Boruto some serious favors by giving him multiple opportunities to take the easy route and cheat. Yet, each time, Boruto chooses to take the honest route, and with it, come some good dividends by the end of the whole “quest” to get a replacement souvenir for his sister. 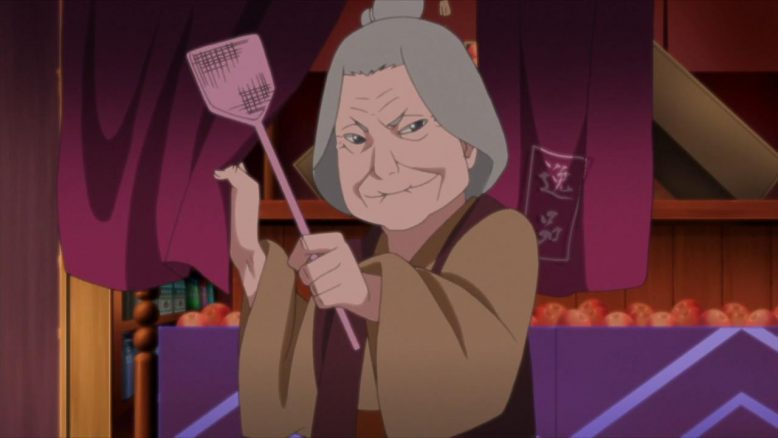 “Back in my day these Fly swatters were the big thing!”

Plus its not just Boruto that gets a nice kindness moment here. Whether its Sarada helping him out by telling him about the store she went to, earlier in the series, or the store lady appreciating his honesty, everyone was just a bundle of kindness and niceness this week. The whole story just felt good. It was heartwarming and showed us how nice of a place Konoha really is. Emotionally, it all just resonated with me and worked, which is why I guess I’m kind of okay with this week’s episode as a whole, even if it does take the show back in a direction that I’m not too fond of.

The larger question then, is whether Boruto NNG is okay as a sort of relaxed slice of life comedy show about Ninjas leaving a peaceful life in a secret ninja village. And to that… All I can say is that if there are more episodes like the one this week, then the show can definitely keep me involved, if nothing else. Is this grade A entertainment? No, but I think not everything needs to be super amazing to be enjoyable. 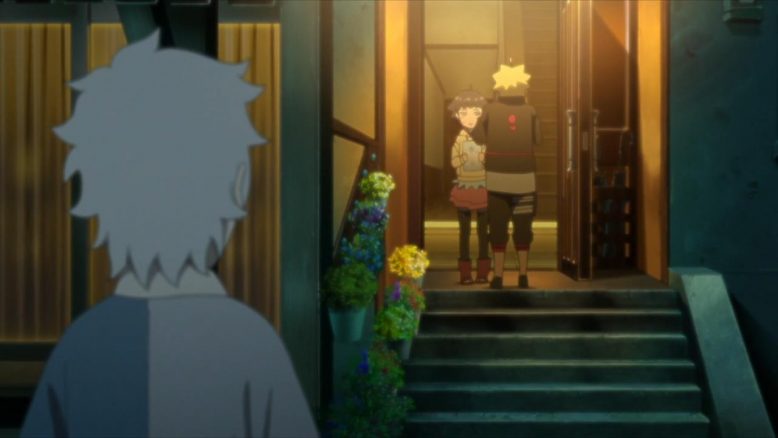 Mitsuki – On that fine line between good friend and creepy stalker.

On the flip side, there’s a danger of things devolving into something truly childlike and cartoony, and that’s the fine line that Boruto NNG has to walk now, if it wants to keep at this particular approach. And to that end, I think we’ll continue to oscillate between “not bad” episodes like the one this week, and “meh” episodes like the one from last week. Its just where this show is at, for now.