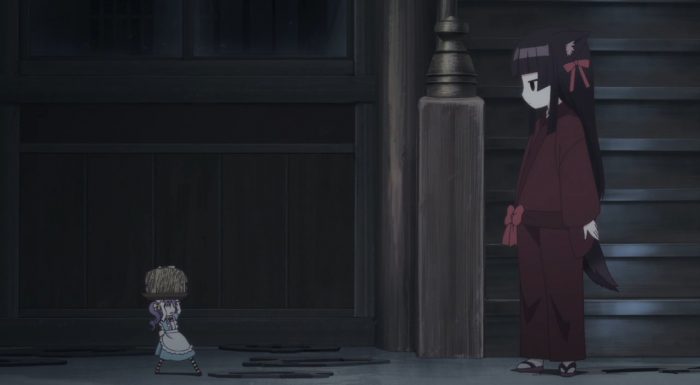 This week another member is added to our growing family at Konohanatei: the cursed doll Okiku, named after a famous ostensibly cursed doll that is currently kept in a temple in Hokkaido. Like the real Okiku, the one in the show was brought to a temple because her owners thought she was disturbing. The temple was supposed to cleanse the evil spirit from her, but instead the priest decided to bring her to Konohanatei, for reasons that are not specified. Where, of course, absolutely no one is scared by her, and her resentment at being abandoned can be eased naturally by associating with people who accept her. 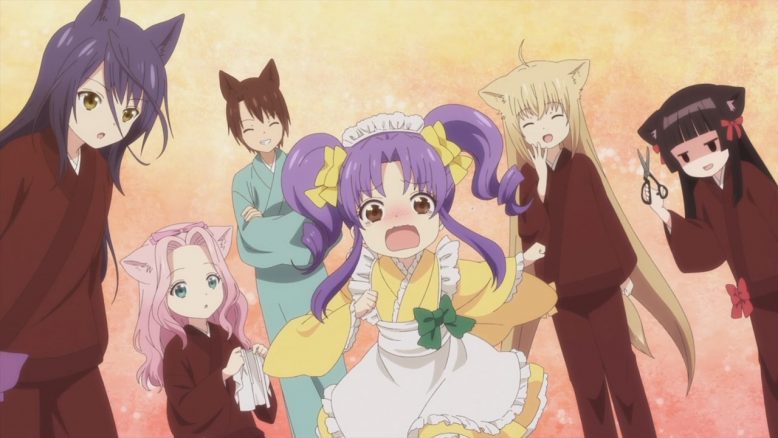 Unlike the original Okiku, who was theorized to hold the soul of its previous owner who loved it and kept it near her all the time before she died, this Okiku shows several signs of being a more common form of youkai object: specifically a tsukumogami. Having been created with loving care for a specific purpose (to be a doll for a young girl), she was never able to achieve her purpose due to the girl’s parents deciding she looked too creepy and shutting her away inside a closet. After years of being left there and forgotten, one day she came to life. That is a very common sort of story for a tsukumogami, but it is pretty sad to see her in her dream here, abandoned, begging for someone to play with her. Fortunately, Urinosuke consumes her nightmare, leaving her with only the happier thoughts of the present. 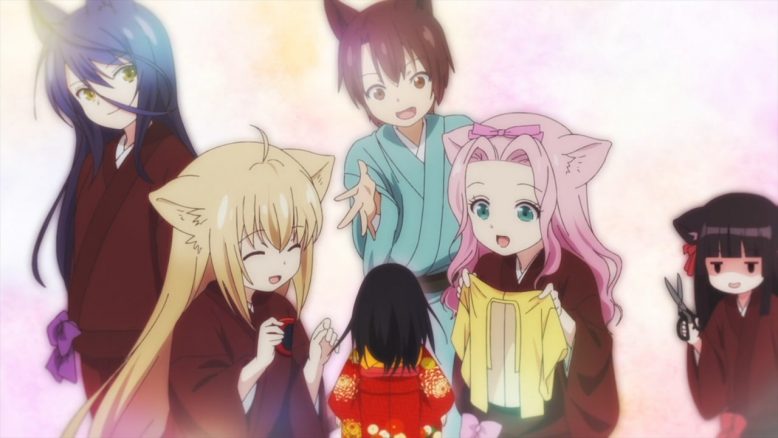 I do have to give a shout out to Ren for her makeover skills. Managing to transform a traditional Japanese doll into an anime-style doll takes some real skill. I’m… not even sure how she accomplished all that. She seems to have even subtly changed the shape of Okiku’s face. 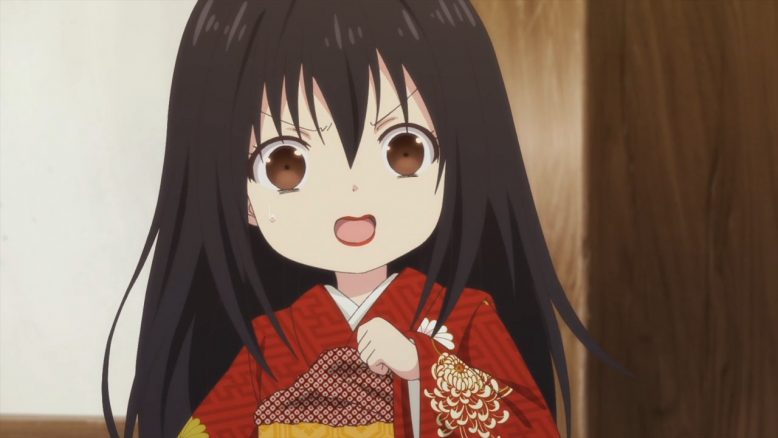 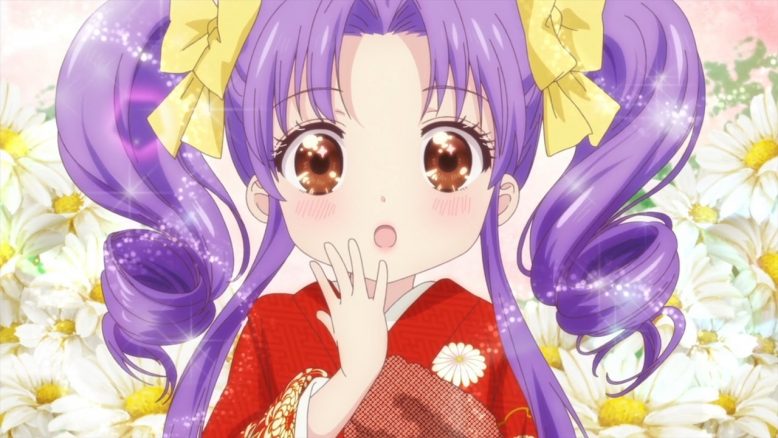 The second part of the episode is much less comedic and much more fascinating, at least in my opinion. I especially have to give credit for the use of color (or, in many cases, the lack thereof) throughout it. The whole segment is set during the rainy season, and the colors of Konohanatei and our characters are all notably muted and grayer than normal. The only exceptions to this are Yuzu’s bright red umbrella, and the incredibly vivid blue and purple hydrangeas that line the path up to the shed where the guest of the week is staying. The contrast between the red umbrella and the blue and purple flowers looks amazing, and is made all the more vivid by how dull the colors on everything else are in this segment. I can’t say why specifically the umbrella had its color highlighted so much, unless it was specifically to create this visual effect, but I suspect the hydrangeas were made to stand out because the rainy season is actually considered the best time of year to see hydrangeas in full bloom in Japan. However gray and unpleasant everything else may seem in the rain, these flowers are at the height of their glory. 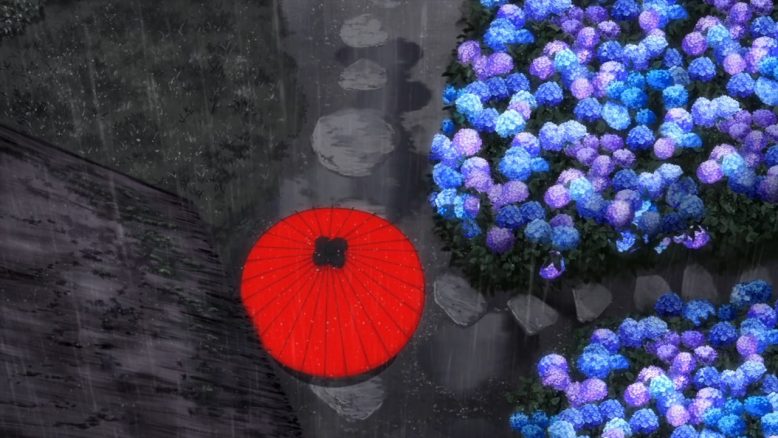 Putting aside the visuals for the moment, the guest this week is quite interesting as well. A young woman wearing glasses as well as what appears to be a blue miko outfit is out in the shed at the end of the flower-laden path, weaving a long piece of fabric in the loom there. She works constantly, without stopping even to sleep or eat, and Yuzu begins to worry for her when she brings a meal to her only to find the previous one still sitting on the table untouched. After returning she mentions her concern to Kiri who promises to think about it, and who also reveals that this guest is “special.” 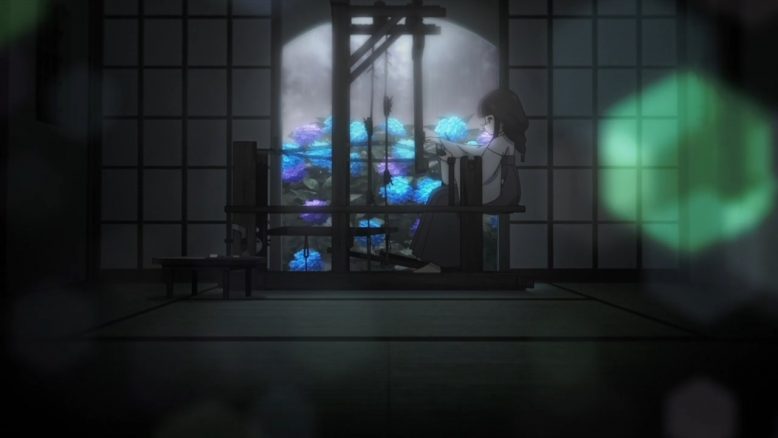 After a bit, Kiri suggests bringing some rice balls out as the weaver as something easier to eat. She initially assigns the task to Okiku, but Sakura interferes and Okiku passes the tray off to Yuzu as she rushes past, so Yuzu heads out to visit the shed again. While there she happens to see an amazing sight: the weaver reaching out into the rain and gathering it up; forming it into the very threads that she is weaving into her fabric. Yuzu is spellbound: not just by this magical sight, but by how smoothly and fluidly the weaver winds the thread onto the shuttle and resumes her weaving. As always, Yuzu reveals her heart through her mouth, and for the first time the weaver changes her expression, blushing in embarrassment at the compliment. 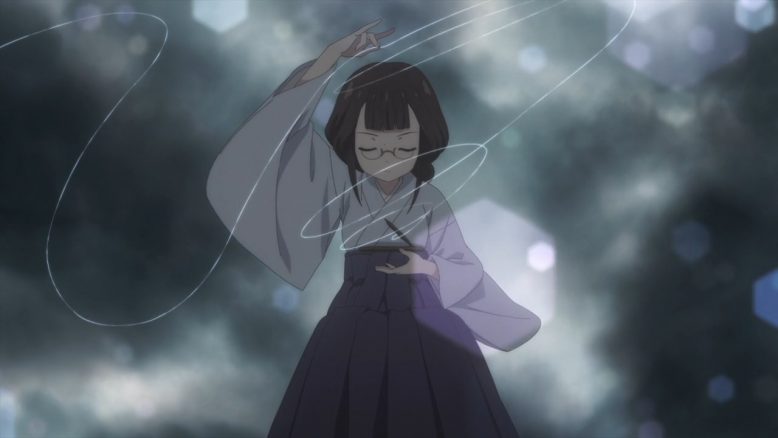 Over the course of Yuzu’s visit the two of them talk, and we get to know more of the mysterious weaver. She has a pair of older sisters (the official translation called one of them younger, but her actual words definitely called them both “nee-sama”), and the three of them serve the gods of the heavens, weaving rain into cloth. They may be priestesses, but given the depiction of them sitting on a cloud, and their ability apparently being unique to the three of them, I am also considering the possibility that they may be minor gods themselves. Anyway, our weaver is upset, because one of her sisters weaves faster than she does, while the other one weaves cloth with better quality. She considers herself inferior because she can do neither, but Yuzu shows her the perspective of appreciating her abilities as they are. What she can accomplish is, in and of itself, a wondrous thing. Rather than ruin that with unhappiness about how it isn’t as good or as fast as someone else’s work, why not appreciate the beauty for what it is? Seeing the weaver thaw over the course of their conversations, and smile, and finally promise to show her completed weave to Yuzu first before showing it to anyone else, adds just a little bit of heartwarming to everything. 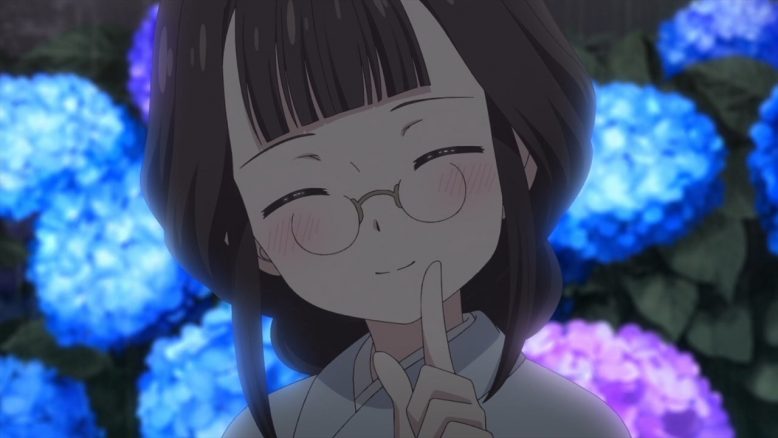 The final scene is something special. With the rain finally stopped, Yuzu runs to meet the weaver, who has finished her cloth. One might get the feeling the rain couldn’t stop until she was finished weaving… Anyway, the weaver hands one end of the cloth to Yuzu, and then, with a smile, unfurls the rest in a large arc. A stream of colors fill the previously gray cloth, and we realize that she’s been weaving the rain into a rainbow. And as the colors fill the rainbow the also flood back into the world, re-saturating everything that has been muted and dull all this time. The sky turns blue, the grass and trees are green, everyone’s clothes and hair shine with color once more, and the world feels alive and awake once more. The moment is absolutely magical and beautiful. 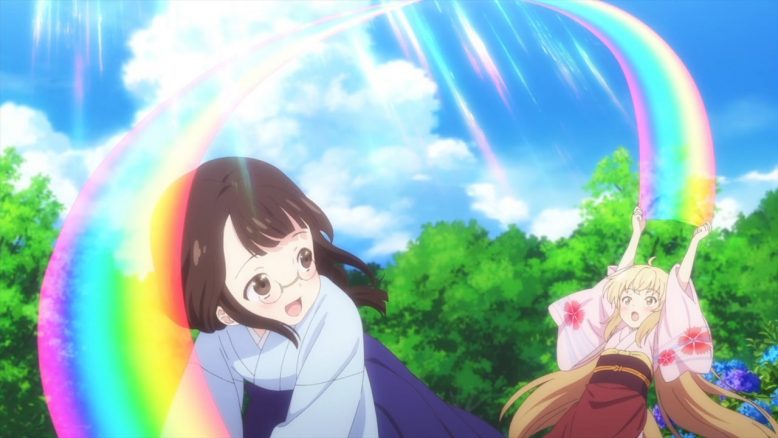 This episode definitely worked better for me than the previous one. Okiku’s arrival had none of the uncomfortable attempts at humor that marked Urinosuke’s, and this week’s guest was both interesting and wondrous. While I do hope we won’t be getting a new permanent resident every week (the inn will get a bit crowded if that happens), on a whole I would look forward to getting more episodes along the same lines as this one. 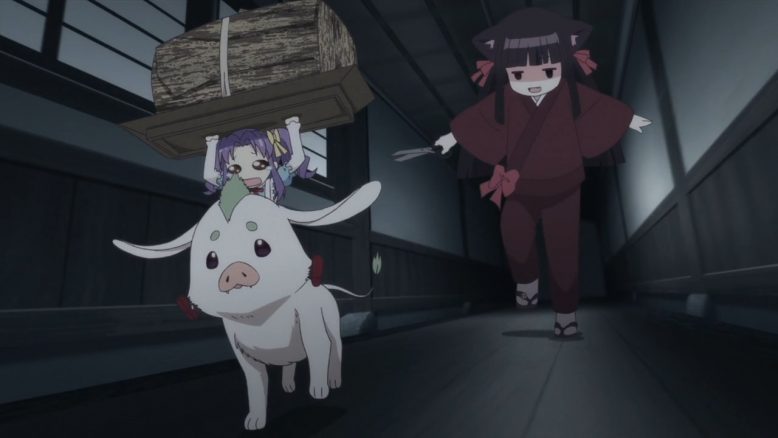 Someone please teach Sakura not to run with scissors.