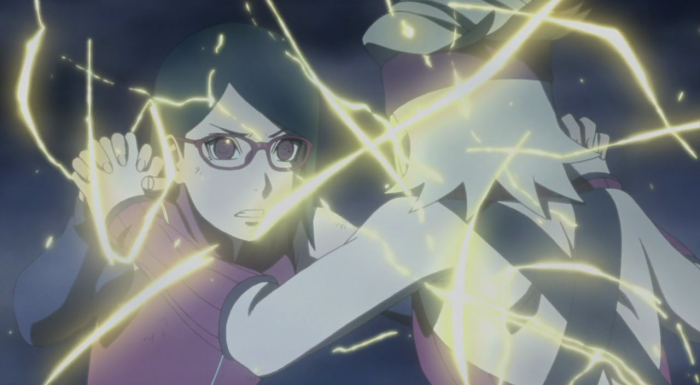 Oh yeah, Boruto is part of a Shounen battle manga franchise, isn’t it? Its almost like Boruto NNG suddenly remembered, this week, after a good 30 episodes, that its actually supposed to have action. And boy, was it good to see Boruto finally settle into a skin where was some good conflict and action between all the shinobi kids that this show touts on a regular basis.

I have to say that this week, was one of the strongest episodes that Boruto NNG has ever had. A big thing that I guess I never even realized, was that the show lacked competent action and fight scenes. Where the original Naruto series always had action as its primary plot driving device, this show has more or less relied on comedy, slice of life and general character dynamics to get the job done thus far.

That’s not why Naruto became a mega franchise, however, and I think this week proves more so than anything else, that Boruto needs to tap into the things that made its parent series so successful. To that end, seeing a bunch of battles interplay this week was fantastic.

Its not often that a show can balance multiple perspectives and fights but still have enough focus to really keep things moving and entertaining. Even the original Naruto series often suffered from stretching out things a bit too much, but I really felt like this week’s episode had the perfect balance of action, switching between characters and progression for the overall story.

Sarada was the primary focus this week, and her battle with the Kiba sword weilder, Buntan. It was pointed out in the comments quite aptly, that it was kind of a shame that Sarada was fighting a female enemy in this arc, but I have to say, it does seem like there was some thought put into the battle itself.

Sarada, for her part, used her Sharingan with remarkable efficiency and mastery, so much so that it almost felt off at times. I mean, the speed at which Sarada copied Buntan’s jitsu and used it against her, reminded me of the Kakashi/Zabuza fight from the original Naruto series.

This wasn’t nearly as good, but I think it had the right dose of elements. Boruto, for as much as it relates to Naruto, is still a different show, written by different people from Kishimoto-sensei. In the end, Sarada uses her Genjutsu, her general combat skills and her knowledge to take down her enemy, all within the time limit she herself had set.

Plus, the show manages to juggle the general action (which was pretty good) with a little flashback scene for Buntan as well. Its nowhere near the level of the original Naruto series, but I think the show was able to sprinkle a bit of emotion into an otherwise standard fight scene.

And it wasn’t just Sarada, either that wowed me this week. Chojuro, for his part, clearly demonstrated why he’s the Mizukage, and why the other “new” Mist Swordsman, are just a bunch of idiot kids using weapons that are clearly too much for them.

It was just impressive to see Chojuro be so vastly outnumbered, and then basically school all three kids in the ways of combat. Its easy to forget that Chojuro is on the same level as Naruto himself, even if he’s never had the same presence on screen yet. Chojuro’s challenge isn’t so much being able to fight, but rather, its getting everyone in his village to move forward and settle in to a new way of life.

The themes of moving forward really highlighted the episode and highlight this arc as a whole. There’s obviously the central conflict between Boruto and Kagura, both of whom are tied to famous Shinobi, of course. But beyond that, the same basic idea was brought into Sarada’s fight too, as she and Buntan both had parental issues that they’ve been dealing with.

And besides all of that, the show also managed to throw in a little fight scene for Iwabe to come in and save the day too. Between that, the whole “intel” that Mitsuki has, and the fact that Sarada and Chojuro have both wrapped up their respective battles, I’d say this episode accomplished a darn lot, without ever feeling too chaotic or unfocused.

Honestly, I wish Boruto NNG did this sort of thing more often. I wish this episode was more or less what the show was, with some setup episodes peppered here and there. In the end… I’d say watching Boruto NNG is a really weird experience, because you never really know what you’re getting. Sometimes there’s some really mediocre, childish stuff, but other times, like this week, there’s some solid storytelling and action that this franchise is known for.

What I really see this week’s episode as, is really a step in the right direction for the show as a whole. I’m really hopeful that the show has improved enough to where it can really start giving us entertaining action and story, and kind of move past the somewhat childish stuff. So far so good, lets see what happens next week between Boruto and Mitsuki.