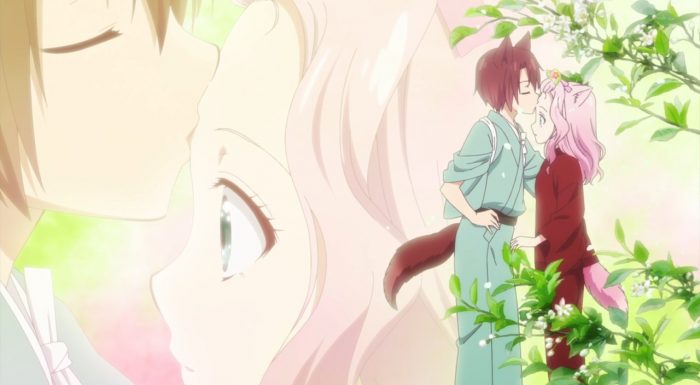 This episode moves away from Yuzu and Satsuki, who have gotten most of the attention thus far, to focus on Ren and Natsume. Under normal circumstances these two are definitely what you would consider an unlikely couple. Ren is a beautiful girl who despises anything rough and sloppy: she criticizes the others any time they don’t take proper care of their appearance or behavior. She carefully keeps a controlled demeanor in front of the guests, always hiding her true feelings in order to maintain what she sees as the proper image. Whereas Natsume is a tomboy who doesn’t care much about her appearance at all, likes things like sumo wrestling (which are definitely not what Ren would consider beautiful), and who acts on whatever impulse enters her head. Logically such a pair of opposites shouldn’t get along at all. On the other hand, anyone who’s at all familiar with storytelling tropes knows that this pairing is almost inevitable. 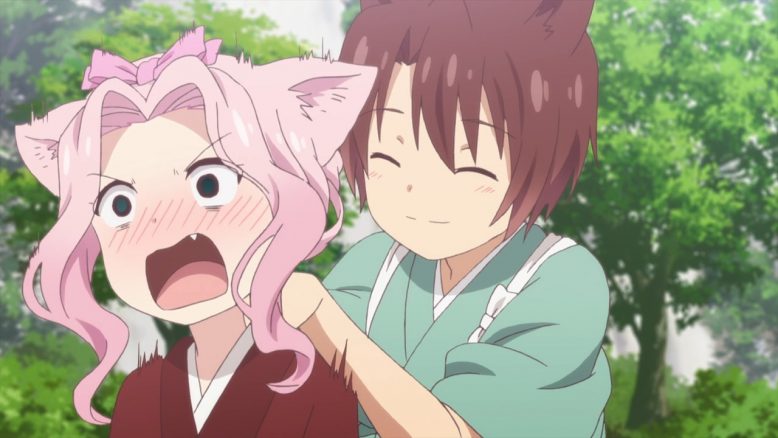 Not that that really makes things easier for poor Ren when Natsume does something foolish that gets them both in trouble. Although apparently she prefers working with Natsume to working with Yuzu. Apparently Yuzu’s innocent naivete is too overwhelming for her to stand, and she desperately wants to yell some cynicism into the new girl. 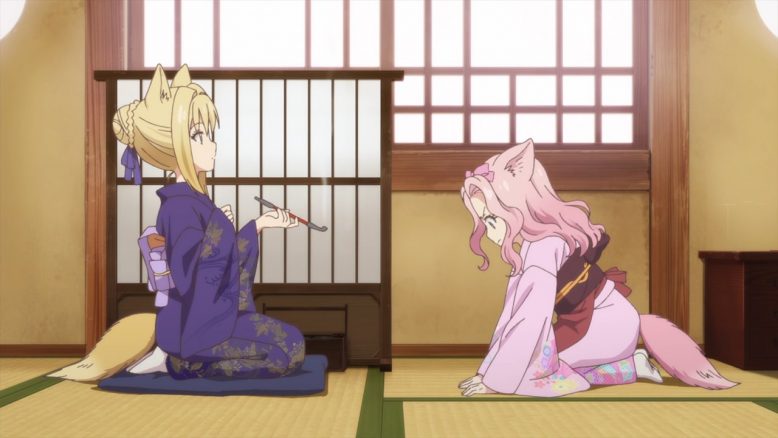 Learning that Ren is afraid of men gives a new perspective on things. In that flashback from when she met Natsume, even in the manga I was unable to tell whether the marks on her were bruises or dirt… or both. It seems from the episode that they were mostly dirt since Natsume was able to wash them clean, which is slightly better than Ren having been horribly beaten, but still it was clearly enough to leave Ren traumatized. 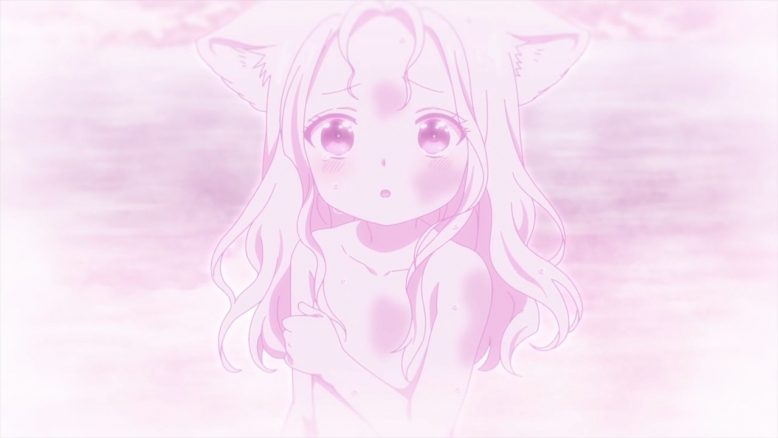 I have to say I very much like how everyone handled the drunk guest at the party who tried to molest Ren. From Ren herself kicking the snot out of him, to Natsume telling him coldly that Konohanatei is not a brothel and that they would not serve him any more tonight so he had better leave, to Okami completely supporting them both, there was never once any implication that his behavior was acceptable. Tolerating sexual harassment is not part of these girls’ job, and Konohanatei as an establishment is perfectly willing to expel customers who step over the line. 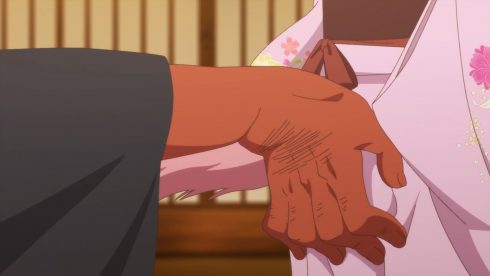 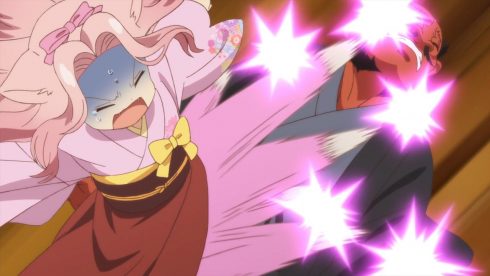 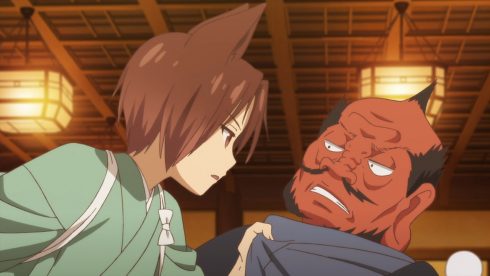 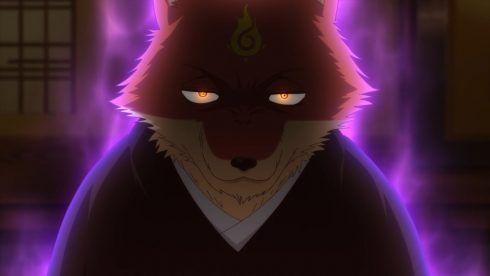 I feel for Ren afterwards. She blames herself for ruining the mood of the banquet. It wasn’t her fault, but that doesn’t stop her from feeling responsible. With the others stepping in to bring the mood back up and help everyone feel like it’s a party once more, Ren is left standing in the hallway alone. Watching, trembling, crying. Unable to enter the room again, even though her friends are putting in so much effort to try to set things right for her sake. She’s afraid, and ashamed of being afraid, but unable to move past her fear. Fortunately Natsume sees her and doesn’t need to ask what’s wrong. She simply catches Ren in a hug and tells her that it’s all right: everything is fine. There’s no need to be afraid any more. The bond between these two is truly strong. 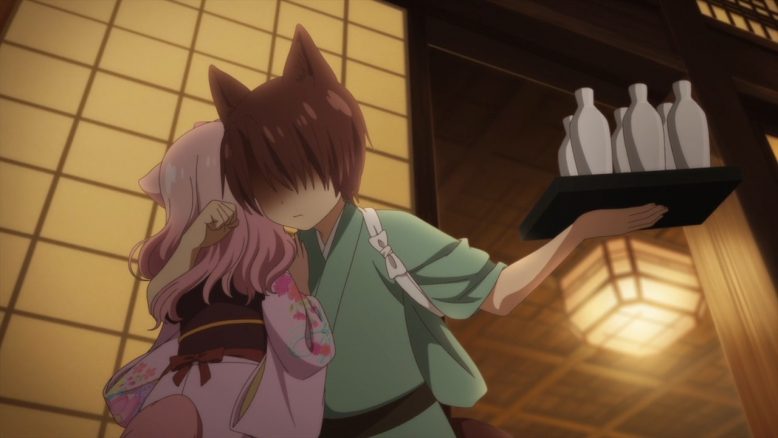 The next segment has a pair of elderly fox or wolf folk visiting Konohanatei, along with their young great great great grandchild Aoi. Ren is assigned to take care of the family during their stay, but Aoi catches sight of Natsume practicing sumo out in the yard, and instantly insists on having her become Aoi’s personal attendant for the trip. This throws Ren into a tizzy. Ever since the first segment, her feelings for Natsume have been becoming more obvious, to the point that she has instant panic reactions at the idea of Natsume so much as going out to the town with any of the other attendants. It hadn’t occurred to her that a guest might also pose a “threat” until now, because Konohanatei’s guests tend to be older. 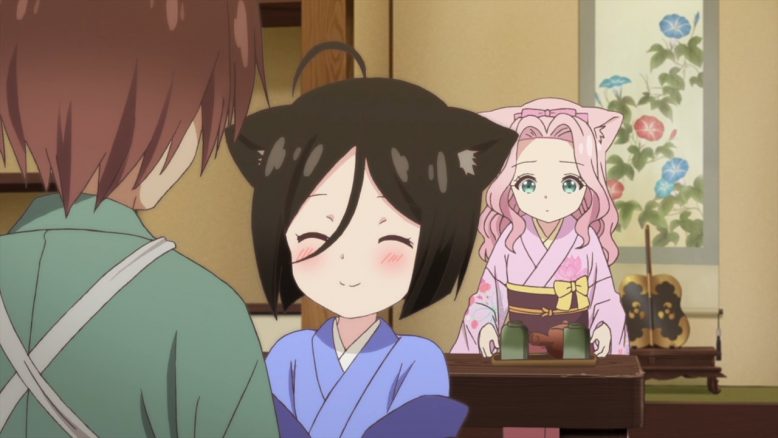 Jealousy definitely eats at her, and she even tries approaching Kiri to ask for something to be done to get Natsume away from Aoi, but Kiri sees right through the nature of the request and just tells her that she should be more honest. Surprisingly it’s Yuzu who manages to get through to Ren, winding her way through Ren’s “I have a friend who’s in this situation” explanation. When it comes down to it, Ren is just sad that the person she cares for so much is being taken away from her. For her own sake, and the sake of their relationship, she should tell Natsume directly how she feels. Of course, Yuzu revealing that she saw through the “this is about a friend, not about me!” excuse earns the poor girl some pain, but still her advice is good. 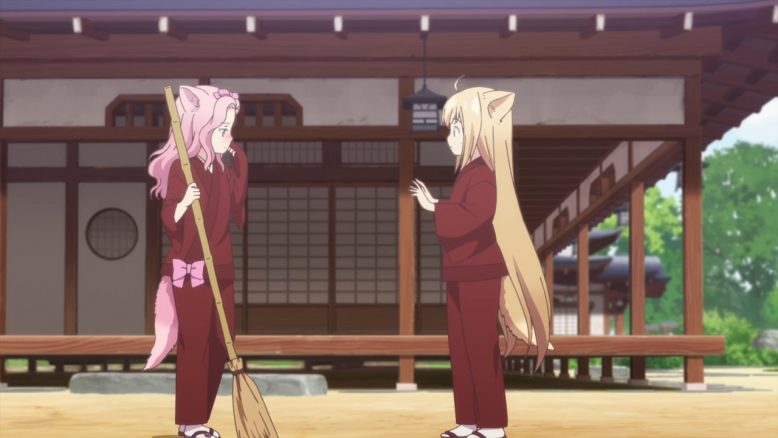 And in the end it all works out. Aoi turns out to be an androgynous boy who wouldn’t talk to Ren because he’s shy around beautiful girls. He approached Natsume because he thought Natsume was a boy, and he wanted to learn how to do sumo wrestling like Natsume can. It’s actually kind of amusing the the revelation that he’s a boy pretty much immediately nixes any concern of romantic action between him and Natsume. It’s probably one of those moments where knowing that the first part of the series was released in a yuri magazine helps put things in perspective: we know the girls are only going to love other girls, and the girls know the girls are only going to love other girls, so Aoi being a boy instantly ceases to be a romantic rival. 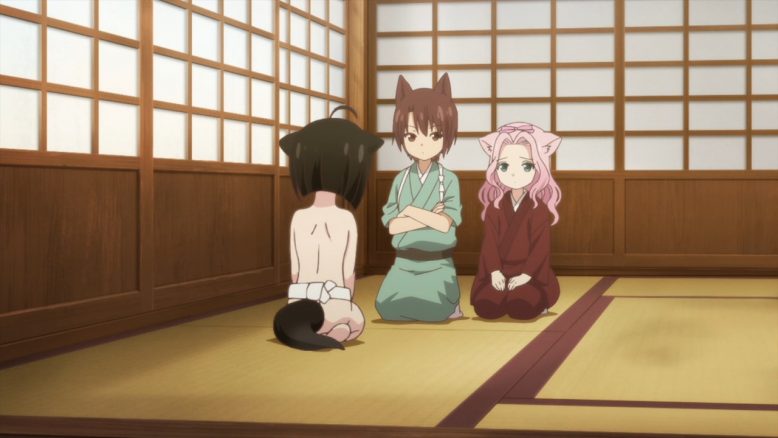 So with that, Ren and Natsume make up. Natsume gives Ren a present of a colorful comb (personally I don’t think it really goes with her hair, but I have zero ability to judge that sort of thing to I could be completely wrong), and then an even better present of a kiss on the forehead that leaves Ren frozen, her face bright red. The final scene with Aoi having developed a crush on Ren, and Natsume telling him in no uncertain terms that Ren is off limits set even more shippers squeeing like mad. There’s no doubt that both girls love each other. They just express it in their own ways. 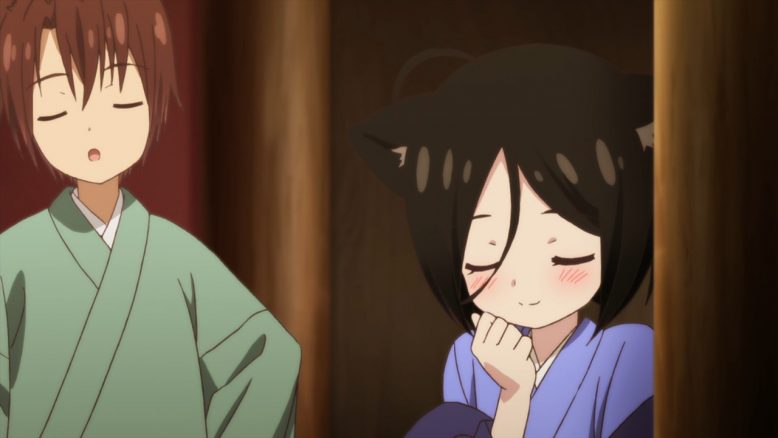 This was an enjoyable episode. At least to me, anyway. I admit to being a fan of yuri and shoujo ai, particularly when it’s handled tastefully (as I feel it is here), so this episode ended up hitting exactly the sort of content that I want. I don’t expect that content to be a focus going forward, but I also don’t expect the series to shy away from it either. There are and will be relationships among these girls, and we’ll see that when it’s appropriate. Still for the most part I expect this series to remain to comfy slice of life with cute foxgirls being cute. My kind of show, in other words. 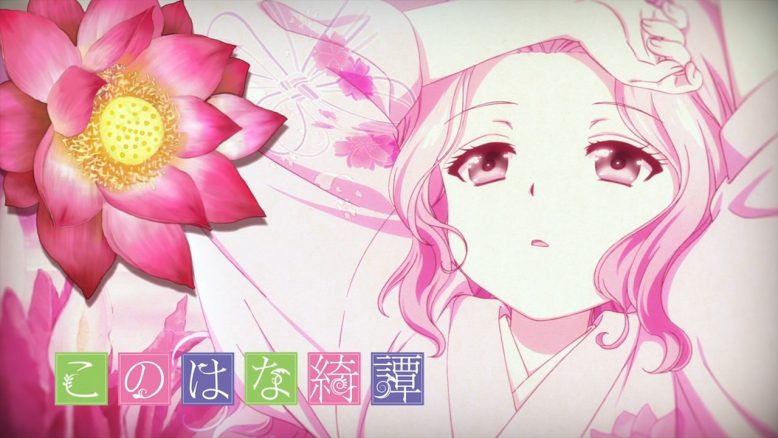 There’s probably some symbolism in the flowers associated with each girl, but I’d have to recognize the flowers in order to have a chance of working it out.