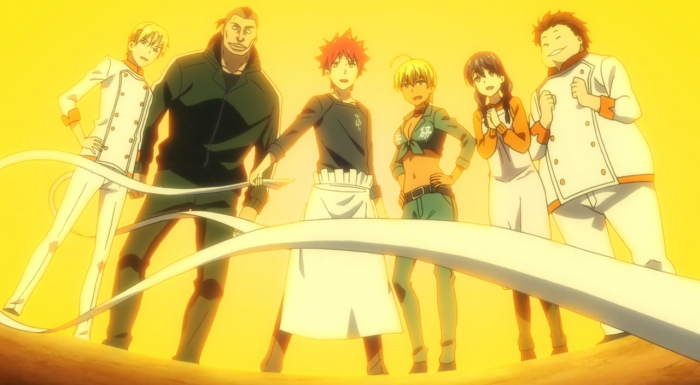 And that is what you call a solid finish to a pretty darn good story arc. While the Moon Festival arc was undoubtedly rushed through in the past four episodes (and could’ve probably used at least one more), I think its easy to see why this is such a beloved arc for many a Shokugeki no Soma fan.

The simple fact is that, in many ways, the Moon Festival arc feels like an encore of the already pretty darn great Karage Chicken arc. There’s a ton of common elements, whether its the whole festival vibe, the focus on cooking, sales and service and of course, Soma has some stiff competition to beat as the under dog with some of his friends at his side.

The reason I like the Moon Festival arc more, however, is because it takes the ideas from the Karage chicken arc and amps everything up to eleven.

The Karage Chicken arc had Soma join up with Nikumi and work with her to create something new and interesting. The Moon Festival arc starts off with Soma and Megumi, but by the end of it, you get a whole band of Soma’s friends joining in to bring it all to a close.

For those who were wondering about the after credits scene from last week, for instance, its revealed that the dude that Soma was talking to in that dark hallway, and who ultimately ends up at the Yukihira diner is none other than Mimasaka.

I was never a huge fan of Mimasaka when he originally debuted as a villain, but I have to say that the show and story has done a good job of making him likable since then. Its especially nice to see the growing rivalary and bromance between him, Soma and Aldini.

To that end, having the Aldini brothers and Nikumi all join in was a special treat. As far as characters go, I think these three are definitely in Soma’s corner the most, so its great to see them continue to gather around Soma. And really, who wouldn’t want to go to a restaurant that has Soma, Megumi, Nikumi, Mimasaka and the Aldini brothers running it?

Its not just the Totsuki kids that help out though, as even the Mall strip owner from the Karage chicken arc makes a return to provide some seating, and Megumi’s club helps out with the lighting when it gets darker. The sense of unity, camaraderie and unison at Soma’s stall is a sight to behold, and definitely culminates in the ultimate payoff for this arc as a whole. The fact that Soma actually wins first place, is just a nice bonus.

Another thing that’s great about the Moon Festival arc, that I think hasn’t been seen prior, is mostly definitely the other groupings of characters we’ve seen. I have to say my new favorite trio has got to be the Ryou, Alice and Hayama combo. While their actual final trick at the end is kinda meh (Dark chocolate that’s been 3D printed on curry), I do have to admit that it would be quite the popular item at a festival. The novelty alone is something people would pay for, after all.

But more importantly, I think the whole Moon Festival arc actually shows why Totsuki, as a school, should exist. This sort of experience, where like-minded kids are banding together to compete against one another, is the sort of experience that leads to real innovation and success in a particular field. Its why I think Totsuki is really kinda cool, despite its somewhat cutthroat nature. I still ascribe to the fact that students should be allowed to fail and learn from their mistakes, but I think the show did a really good job of not letting the threat of failure overshadow everything else.

The final thing that’s worth talking about, is the cooking itself. I’ve intentionally avoided talking about the whole Mapo Tofu vs Soma’s Black pepper bun because I kinda knew what was coming down the line. I think Kuga puts it best, in that Soma actually takes four days to finally build and assemble his actual restaurant, learning as he goes.

And at the end of the four days, we have Soma with a pretty killer stall that’s a pretty solid threat to Kuga’s own monolith of a place. By day four, Soma has the Black pepper Buns, the Sorta-Dazai Noodles AND his curry Mapo Tofu as menu items. Not only that, with all the advertising and general scoping out of the competition, Soma creates a restaurant that ultimately trumps Kuga in both service AND food.

Now, as for the food itself, I personally actually like Soma’s style of cooking more than Kuga’s. I’ve had a lot of spicey food in my life, given that I come from a place whose food is built on spices. I have found, however, that while spicey food is great for its first time impact, I much rather enjoy food that does something more than over power you with how darn hot it is.

To that end, I think Soma’s approach to each dish he creates, is just so much more interesting than Kuga’s “Its so spicey but its so good” Mapo Tofu. The fact of the matter is that Soma’s food is suited for a wider range of tastes and people. Anyone can really enjoy the Black Pepper Buns, the Sorta-Dazai Noodles or the Curry Mapo Tofu without feeling overwhelmed or worrying about whether their stomach will hate them later on.

So if I had to choose between Kuga’s Chinese Restaurant and Soma’s stall, I think I’d go to Soma’s stall three times (Trying each food item), before I’d even worry about trying Kuga’s Szechuan stuff.

And here’s the other thing, which I think speaks to the fact that I’m not really a proper foodie, in that I prefer to try fusion cooking, sometimes even more so than a pure traditional offering.

To that end, Erina’s whole schtick about Ma and La, ends up being moot by the end of day four, doesn’t it? Ma and La are great for if you’re trying to create something traditionally Schezwan Chinese, but then you can only have a rather specific demographic enjoy it.

I just respect the sort of service, regardless of whether its in food service, that caters to its audience and customer rather than to whatever the “proper” way should be. To that end, I found myself liking Soma’s food, cooking and approach a lot more.

And I think it continues the theme of the show’s whole “the food for the common man” versus “the most exquisite food” conflict. Soma continues to create food that many people will enjoy, and keep coming back to, and he continues to clash with the rest of the Totsuki Elite kids as a result. That clash, with Soma coming out on top through sheer innovation and ingenuity, never gets old.

Now, before I wrap up. I think its worth stating that I am a bit sad about how quickly the show ran through this arc. Granted, we got four episodes, which is already pretty long, but a part of me, the real diehard fan of Shokugeki no Soma, wishes the show could just adapt everything as slowly and carefully as it wants.

I’m sure whoever budgets the time for each arc just didn’t think that this arc, which actually kinda starts off what will become the crux of the main conflict for the series, was worth spending too much time on. Its sad, but I think, and hope more so than anything else, that the rush kinda stops here.

Shokugeki no Soma has a lot of solid content coming, but to use a food analogy here, I think the show really needs to relish and enjoy everything, rather than force the audience to gulp it all down as quickly as possible. This kinda quick pace works, but I don’t believe it does the awesome story, the solid characters and everything else that Shokugeki no Soma has, justice.

(Note: No screenshots this week as I am overseas and still trying to keep up with blogging stuff on a trip. I’ll add the screenhots in later, and hopefully get back to my regular schedule next week)