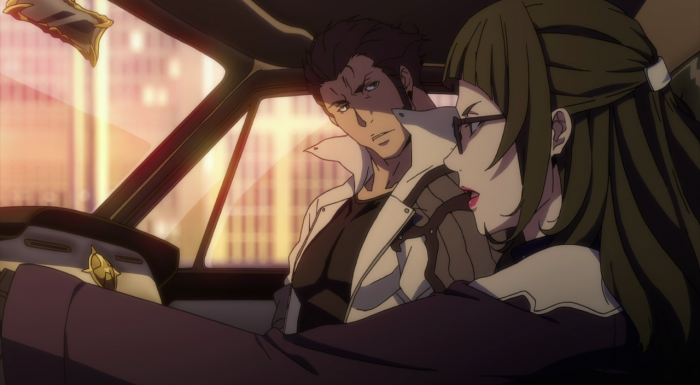 After three episodes of hearing about the term constantly, I think its high time we hear about what exactly El Darado refers to, don’t you think?

The question of what El darado is, and what exactly is going on in the grand scheme of things is still very much an unknown, however, when it comes to Garo Vanishing Line. This week’s episode was yet another character introduction episode, so the show seems like it still just laying the foundation for whatever it is it’s actually going to focus on.

The character to be featured this week, was Gina. Gina, turns out, is a Makai Alchemist, and seems to be very similar to Emma from the original Garo. Where Emma had the “older sexy lady” vibe to her alongside a checkered past, Gina is pretty Emma’s sex appeal, turned up to eleven.

There’s a lot of leering shots and some serious fanservicey stuff that I think brings up the whole “this is cool guys!” vibe that this show has been going for. Unlike Emma, it doesn’t seem like Gina has any depth to her.

All we’ve seen from Gina is her style and her ability to basically dress in scantily clad outfits and entice men. Is that enough? I don’t really think so, but first impressions can be deceiving when it comes to Garo Vanishing line. I thought Sword was nothing more than a muscle bound dufus when I first saw him, after all.

And I will say this, Gina does have some charisma to her, and that air of mystery that I think worked so well in the original GARO series with Emma. I doubt we’ll see her get romantically involved with anyone though, and she seems to be very much like a Fujiko-esque (Lupin III) character that’s in it all for herself.

I won’t deny that it was kinda entertaining seeing Sword and Gina work together. Sword clearly can’t handle Gina all too well, and Gina plays the dude like a fiddle. The enjoyment, therefore, from the episode, was definitely from watching these two characters and their whole dynamic play out.

As for the Horror-Hunt of the week? It was another kinda cliché and uninteresting story that just kinda served as a macguffin more than anything else. A horror that was masquerading as a computer is a decent idea, but the show never really does anything interesting with these monsters it creates each week.

There’s nothing unexpected, or really surprising about any of the Horrors we’ve seen thus far, and that’s kinda sad. This week felt even more “monster of the week” than usual though, because the person actually benefiting from the Horror, Damian Steward, really didn’t get any kind of repercussions from his “deal” of sorts with the Horror.

Generally how the GARO horror stories work is that a person ends up selling their soul to a Horror, in exchange for fulfilling some desire. The sad tragedy being that this all a ruse, and the Horror ends up taking over said person and basically making them a vehicle for eating humans.

This week’s story, however, broke from that tradition and instead had Damian basically feeding this computer people every now and then, and benefitting from it all. You could argue that he’s a sleeze and a murderer, but the guy himself doesn’t really get any sort of con out of the whole arrangement.

Sure, there’s the idea that the Horror was eventually going to eat everyone in Damian’s building, but Emma and Sword end up stopping it all before it happens.  So in the end, the story for this week’s horror feels kinda flat, which is a departure from last week, where the story at least had an emotional backbone to it.

But beyond just the story and character stuff, which still feels kinda preliminary and simple, The visuals and production continue to bring in the dough with this series. Man does the show look good, and bask in the fact that it has some stellar art direction and animation.

Whether its all the scenes with Gina in them, or the eventual battle with the Horror, GARO vanishing line is really killing it in the visual department, and still has that style and flare going that we saw in the first episode.

Having said all of that, I think three episodes is all GARO Vanishing Line can really afford for introductions and style over substance. We know that GARO is a good looking show, we know that it features some cool looking and sounding characters, but what we still don’t know is what the show as a whole is going to shoot for.

I sincerely hope that El darado is actually worth whatever this show is setting it up to be, because the deck is pretty stacked otherwise. The characters in this show are definitely nice and play well off of one another, and the overall visual and audio production for the show is top notch. If we get a solid story with some great character development, then I think GARO Vanishing Line may very well end up closing the gap between itself and the original Garo.

(Note: Apologies but there are no screenshots this week as I’m out overseas on a trip. That is also why said episode post is late, but things should normalize come next week!)