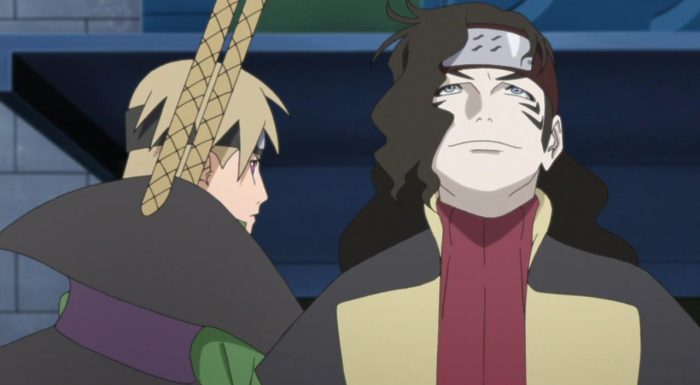 I just don’t get this show. I seriously just don’t get it, at all. I mean… Just as I’m about to give up on it, just as a I resign myself to the fact that Boruto NNG is probably not going to amount to anything more than a kids show… It gives me an episode like the one this week. This week’s episode was good, and it felt like Boruto NNG changed personalities and went back to being a darker, shounen battle story about Ninjas again. Why the show doesn’t just stay in this mode is beyond me, amd I really do feel like there’s this internal battle going on for the heart of what this show, nearly every week. 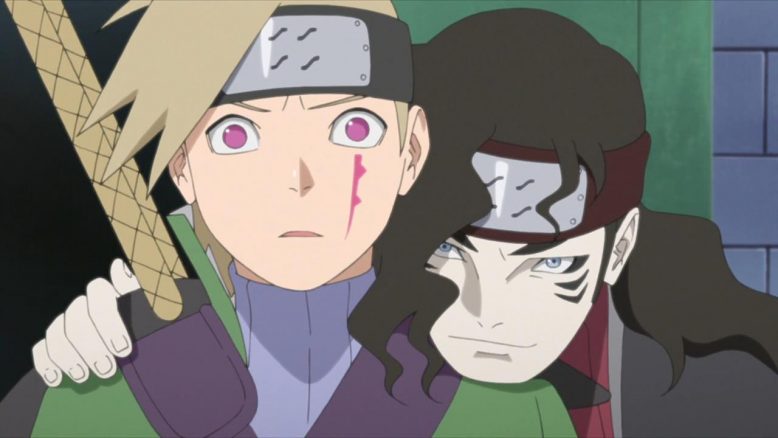 This week, the side that I care for, the side that has the good character moments, opposing ideologies and the potential for a solid conflict, is what won out it seems like. While it never felt like the show quite earned it, every moment of this episode felt interesting and exciting as moved into the crux of this whole latest story arc. I’m actually kind of invested in the whole Kirigakure, Blood Mist rebellion thing now, and all it took was one competently done episode to do it.

In a way, I think this episode almost proves my point from last. The ingredients for a solid story all very much here, its just a question of whether the show will actually use them. To that end, it almost felt like the show systematically went through and fixed all the issues I did have with this arc, last week. Its almost as if a different writer came in, saw what a bungled mess last week’s episode was, and correct all the missteps that the show had managed to do in one week. 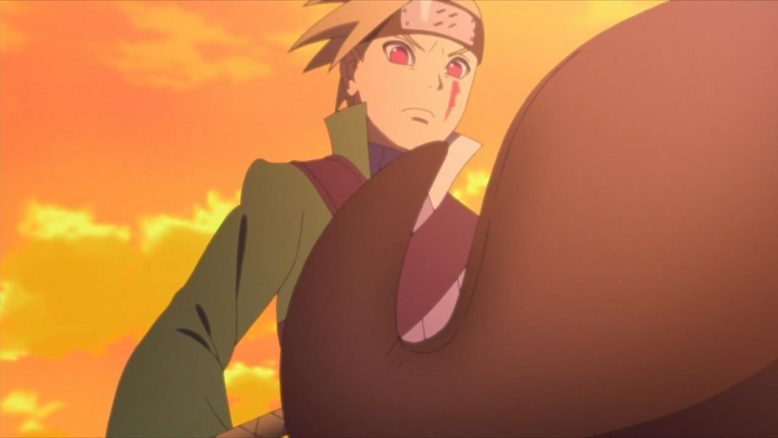 Kagura really just wants to play with his big sword…

The first of those fixes, was obviously Kagura’s motivation. While it was choppy and stupid to see Kagura just go from “I LOVE PEACE” to “I WAS ALWAYS A KILLER”, this week at least gave us one introspective moment where Kagura kinda laid out his own feelings out on the table. See, unlike what even Boruto thinks, Kagura isn’t actually siding with Shizuma because of some sense of debt or history, its more of a question of what Shizuma represents. Kagura, who’s been forced to deny the fighter in himself, now see’s Shizuma’s world as a way to embrace it all.

The whole line about Shizuma actually being the one person who accepts Kagura for who he really is, is a telling one. To Kagura, as much as he’d like to deny it, he actually enjoys killing and fighting, his instincts almost crave it. And so, on some deeper level, what Shizuma is offering is actually kinda tantalizing to him. THAT whole idea, the fact that Kagura actually kinda wants to give into his own darker side, and wants to follow Shizuma for his own reasons, makes for a much better motivation than whatever stupid excuses we got last week. 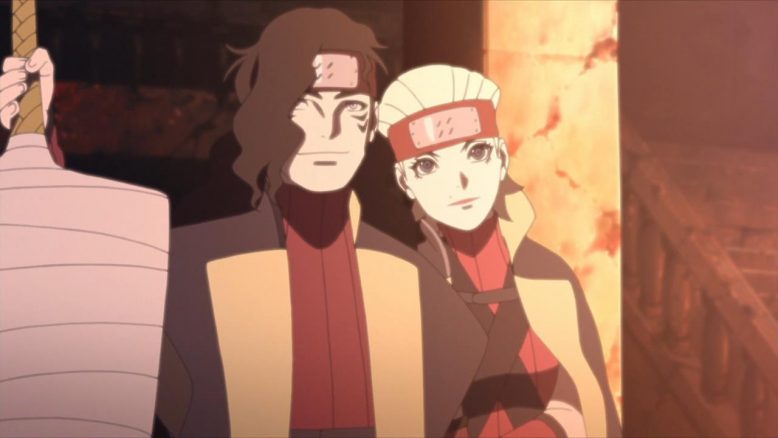 And here’s the thing, for all the hate that Shizuma is seemingly getting from various characters, he’s actually got a very valid view point for what amounts to a warrior village. The whole idea of peace and a village full of Ninja assasins, just doesn’t jive all too well together. I’ve always wondered how a franchise like Naruto has always skirted around the fact that basically every Hidden village is a training ground for Shinobi. These Shinobi go on missions for their particular country and they’re in the business of killing.

People like Naruto and the whole concept of the Hokage may have come in and made it all more honorable, but the core idea behind this franchise is a bunch of kids growing to become trained killers, warriors and spies. So when I see people flocking to Shizuma because he fully embraces the actuality of what being a Shinobi is, it makes a lot of sense. 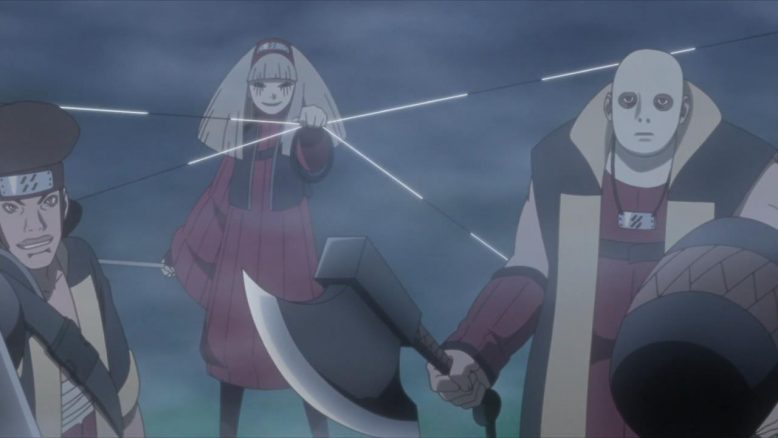 I mean… What else are these guys gonna do? Form a Circus Troupe? XD

The whole revolution that Shizuma’s pushing for, is arguably the “right” move for a bunch of kids that come from a long line of warriors. Changing the village of the Hidden Mist into a tourist resort, actually makes no friggin sense given the place’s history. And its not surprising that there are people, who full respect and embrace the terrible history and culture of the past.

Now, its worth noting that I’m actually more of on Chojuro and Naruto’s side in all of this, i.e finding a non violent way to live, but the fact that I can see the other side of this conflict, makes it all so much more interesting. And that’s the one thing that I think this story arc really lacked, an actual conflict that felt meaningful. 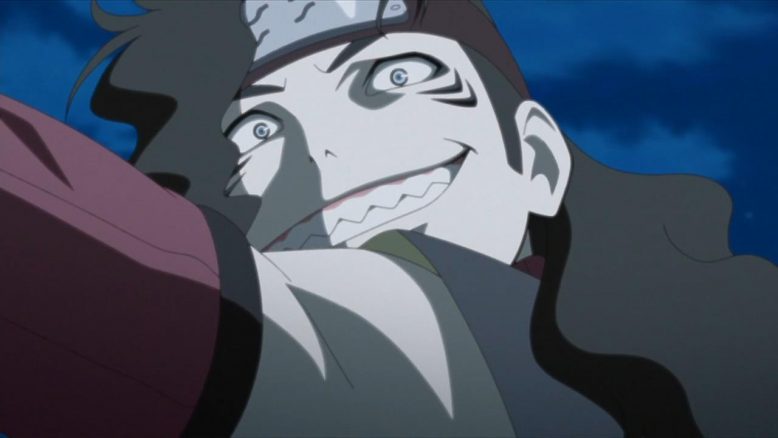 The face of a winner! (…And a creeper)

The battle is on, both for the future of the Kirigakure Village, as well as its best and brightest, Kagura. And so far, Shizuma seems to be winning. He’s amassed a bunch of weapons, he’s got a band of followers, and he’s managed to bring the strongest member of the other side over to his. And amidst this situation, is Boruto.

I’m still a bit uneasy by the fact that Boruto, Sarada and Chojuro are basically going out together to quell this rebellion by themselves, but the show at least kinda tried to provide an excuse for it all. I get that Boruto is basically trying to downplay the severity of Kagura’s actions by making it a little kids spat than an actual civil war. I get that, but there’s just something so odd about a frigging diplomatic guest conspiring with the leader of the country he’s visiting, to try and save someone that has clearly gone off the deep end. 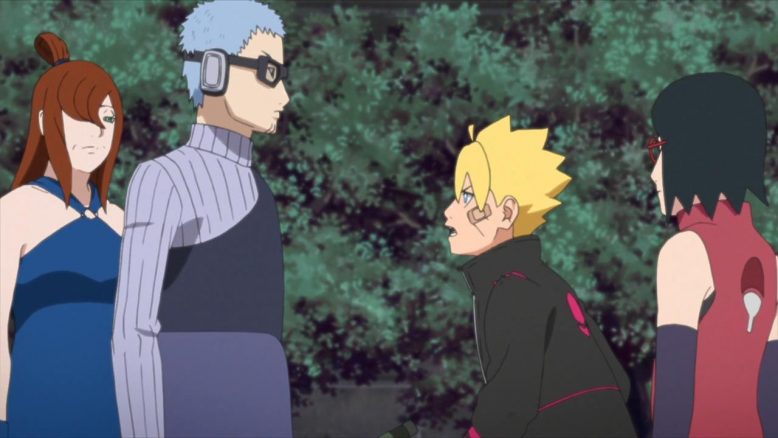 Mei, totally bored with all these stupid kids and their impulsive acts.

Make no mistake, Kagura is in the wrong here, and Chojuro’s earlier decision to execute him, is the right one, at least as far as the village itself goes. Kagura has broken the rules, and he shouldn’t get a pass just because Chojuro likes him. But flat out killing a misguided young man is such a big waste.

That’s why when Boruto and Sarada flat out scheme out a way to save Kagura, it works so darn well. Here’s the thing, whether Boruto likes it or not, he totally ascribes to the same view his father has. Naruto is all about protecting the members of his village. He’s all about making sure everyone has a place, and that everyone is able to live happily in this new world. And Boruto, has more or less taken that habit of his dad’s, and always embodied it. Boruto doesn’t care about the bureaucracy angle of the Hokage, but he will totally do everything he can to save the people he cares about. 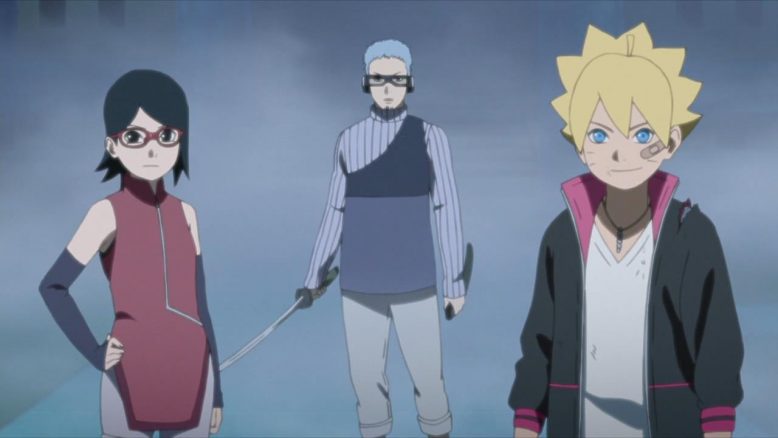 The show wisely subbed out Mr.No Pants and put in the Mizukage for this battle.

And that’s what links him and Sarada in this battle, because Sarada is 100% behind Naruto’s way of thinking. If Naruto were here, he’d find a way to save Kagura rather than fight against him. We’ve seen, even in Naruto’s own story, that his way of fighting against enemies has always been to try and empathize with them (e.g Pain, Gaara e.t.c). So Sarada fighting to make sure no one gets abandoned, felt like a natural progression for her character too.

But Beyond just Sarada, Chojuro and Boruto, I’m glad that the show also had a few of Boruto’s classmates move behind the scenes to join the fight as well. It just makes no logical sense for Boruto to take on seven talented warriors with himself and Sarada. And I have to say, I love the fact that the show is actually following and calling back to past events. 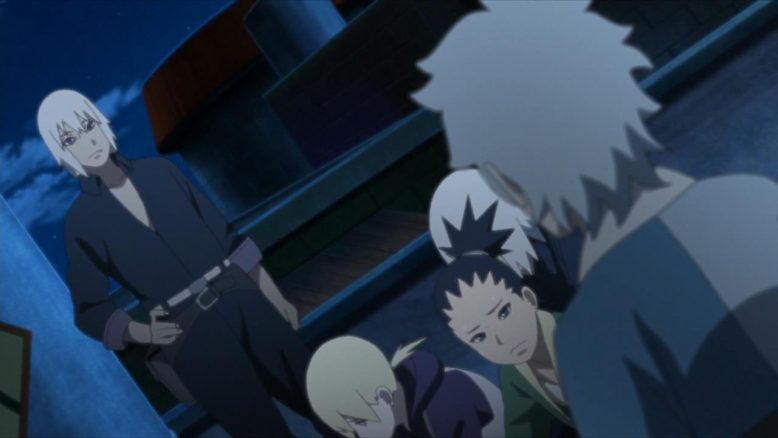 Meanwhile, the adventures of Mitsuki and Friends continue!

Shikadai and Inojin for example, talking about how they don’t want to sit out on the action this time, was a nice little call back to how Boruto and Mitsuki handled the whole Inchou situation by themselves. And speaking of Mitsuki, I love how there’s this whole back channeling happening between him and Orochimaru, and how he continues to move on his own to support Boruto. And its not just these three, there’s also Iwabee who’s sulking around. Its not clear when these guys will join the fight, but the setup’s there for them to jump in at some point.

As for the battle itself? It actually starts this very week, even if right at the end. And its as the battle itself starts, that I think the show really settles into the franchise roots. The battle with Shizuma and the other Mist swordsman, looks serious. With Chojuro’s appearance, it becomes clear that this is an opportunity for them to basically take out the very leader the group is inciting a civil war against, and it takes only a few seconds for them to easily corner Chojuro, Boruto and Sarada. 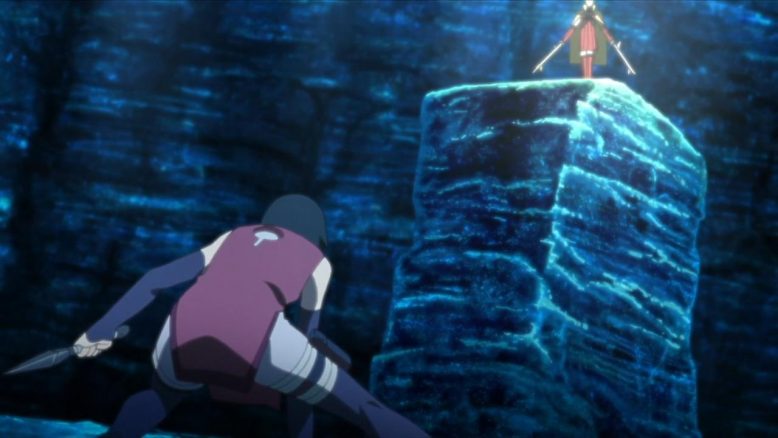 And here’s the real thing, this whole arc is really starting to feel like its going to jump into a bunch of fights between characters. Sure the end goal is going to have Kagura come back and potentially turn good again, but Shizuma and the rest are actually solid villains and opponents that Boruto and co will have to take down. And despite the fact that Sarada has the sharingan, the good guys generally don’t have too much of a fighting chance at this point.

Boruto and Sarada are really the underdogs here, and I think this is the first real situation where the two kids have to actually fight as warriors, and put their money where their mouth is. They’ve both got beliefs and visions that they ascribe to, but can they actually back up those things up with their own skills and ability? The fact that Boruto: Naruto Next Generations is actually at a point where THAT is the question being asked, is just mind blowing to me. 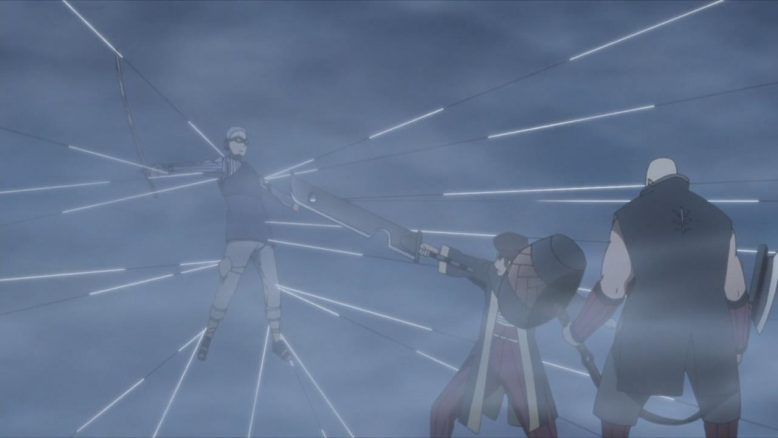