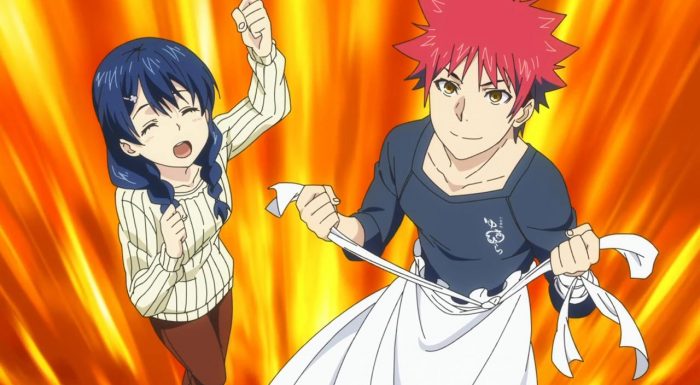 And THAT, my dear friends, is why Tadokoro Megumi is the best female character in the cast of Shokugeki no Soma. 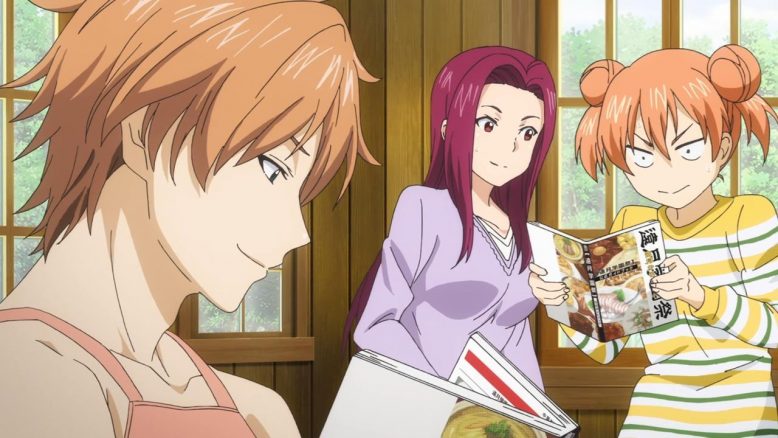 Now… Before I get into qualifying that particular statement, let me just start by saying that its a strange feeling… A strange feeling, watching Shokugeki no Soma again and seeing one of my personal favorite arcs of the manga on the silver screen in animated form. Most of what I feel here is a sense of joy, as the hype, excitement and general sense of cheer that comes from a school festival is so beautifully captured by this week’s episode. The strengths that this show and this franchise have developed over the course of the two previous scenes are all coming back in full force, with this latest series, carrying the general momentum of the franchise itself forward.

One of the best things I think, that we’ve seen from Shokugeki no Soma is how its cast of characters have transformed from weird misfits that were just battling and challenging one another, to genuine friends that learn and grow with one another. The somewhat cuthroat nature of Totsuki Academy is still present and there, but its almost superseded by the idea of a bunch of like minded and passionate young chefs coming together to learn from one another. 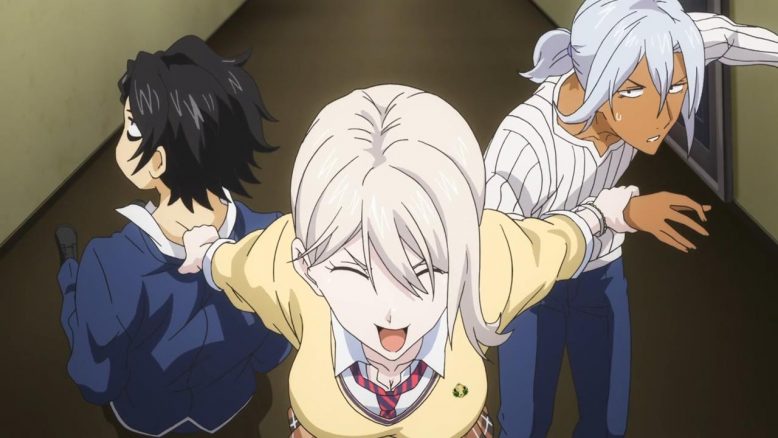 Alice increases her harem by one? XD

To that end, beyond the core conflict between Soma and Kuga, we get a bunch of smaller groupings happen, clear inspired from Soma’s own bold moves. The group that I think is most surprising, is none other than Alice, Ryou and Hayama. Alice for her part, has definitely taken a bit of a backseat after her big battle with Soma in the Autumn elections, but its nice to see that she’s still not only kicking but finding ways to liven things up for herself and those around her.

Its not just in the whole joining up with Hayama either, but in the whole interaction that she has with Soma, Erina and Hisako. Here’s a scene that’s both played for laughs, but also shows just how much all the characters have changed and grown since the series started. As Erina quite aptly points out, Hisako is a lot friendlier with Soma, especially after what happened with the Stagiare. I think Hisako has, at the very least, realized that Soma isn’t a bad guy, and that Erina herself stands to gain something if she interacts with him. 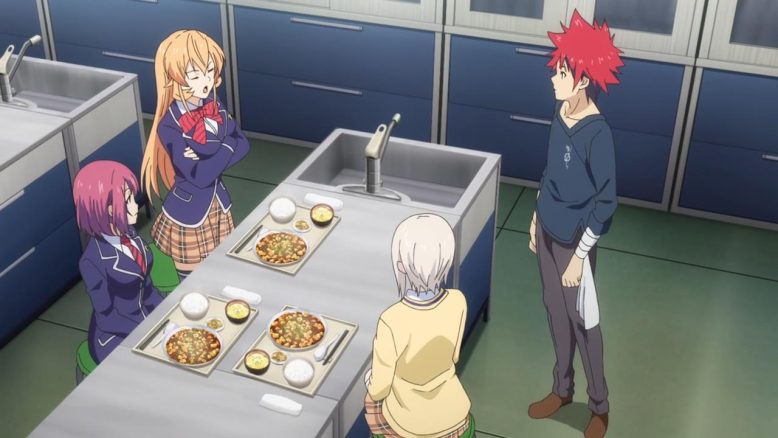 Yeah, Erina still sounds like her uptight arrogant self. All is right with the world…?

Erina, for her part, is still heavily resisting anything to do with Soma, but I feel like the show is suggesting that its only a matter of time before that wall cracks open. We’ve seen Soma slowly and steadily win over literally every member of the cast that’s got some redeemable trait to them. I’m sure there’s a question of whether Erina is a redeemable or not, but I suppose that’s something we should wait for the series to answer itself, as it definitely feels like that particular answer is coming sooner rather than later.

But sticking with Erina for another minute, its worth talking about the voice acting issue I mentioned last week. Shockingly, I have to say that the adjustment period that I thought would take a few episodes, is more or less over starting this week. For every scene that Erina was in, I flat out forgot that a change in seiyuu had even happened, and so I have to give props and maybe even some apologies to Hisako Kanemoto-san. She’s done a fantastic job of settling into her role, and I just don’t have any complaints moving forward. I can’t really put my finger on how she did it, but Erina’s change in voice is hardly noticeable, which is the best possible situation for that character and the show to be in. 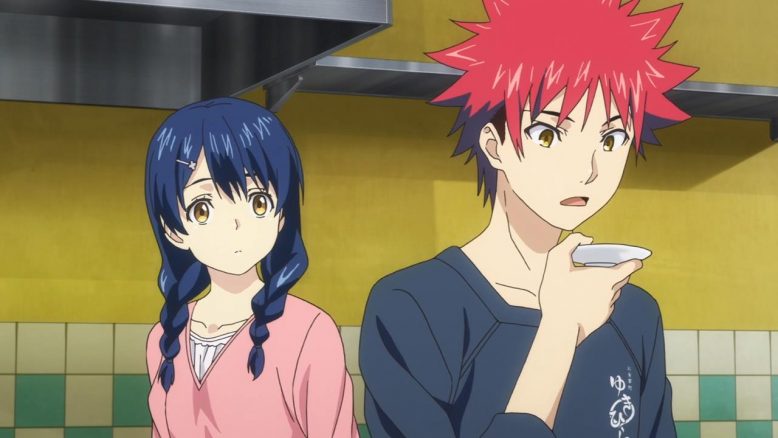 Come on, you gotta admit, they look good together! ~_^

With that said, lets move back to the core issue in question, i.e Soma vs Kuga. The big development this week is Megumi not only mentioning that she turned down two of her other affiliations, but that she more or less flat out asks Soma to help him out during the Moon festival. That whole moment, both in the anime, and in the manga when I first read it, was and is just so… Darn awesome and touching.

I know there’s a huge difference of opinion on who Soma matches up with in terms of shipping/coupling, but my hat is still very much in Megumi’s corner. I mean, just look at how nice and selfless she is here! I mean, yes, she’s been helped out a lot by Soma in the past, but lets not forget that the risk of failure in the Moon Festival is expulsion. Megumi isn’t just helping out a friend here, she’s putting herself on the line and playing a supporting role to someone who she both admires, but honestly also worries for. 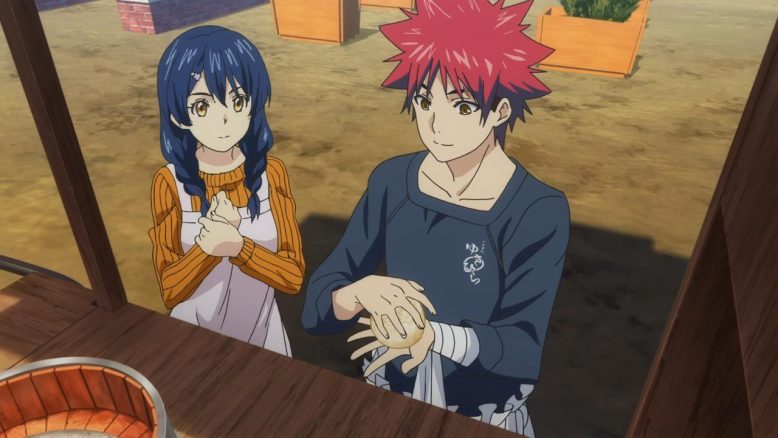 “And for my next trick, I will make this bun defy gravity!”

And here’s the thing, Soma is in a huge lurch without Megumi actually helping him out. He’s got no staff, no assistants, no one to help or bounce ideas off of, and no matter how talented he is, organization and planning isn’t his strong suit. Sure, we all love Soma for being the creative genius that comes through in a pinch, but… Just as Alice is finding people to ally with and better herself, so too does Soma himself.

And its worth noting, that Megumi almost takes on a similar role to what Nikumi did in the Karage Chicken arc from the first series here. Its an interesting dynamic, and a new one. Where Nikumi was able to get some time to help out Soma during that KC arc, its now Megumi’s turn to not only help Soma out, but really just hang out and do something cool with him. 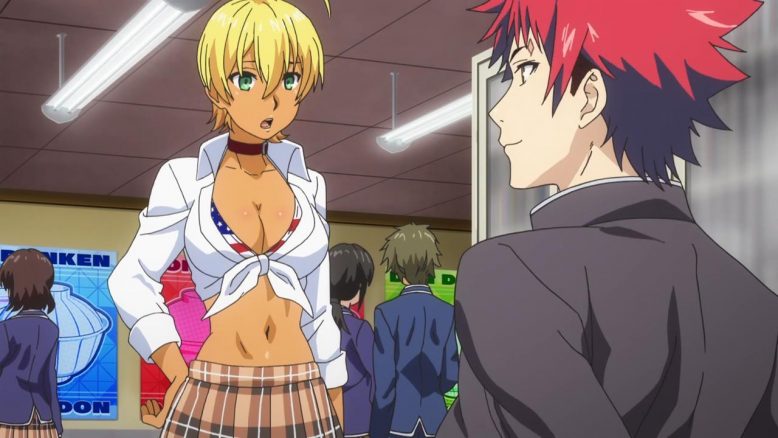 While Nikumi isn’t on team Soma this time, she’s still doing mighty fine with her club.

As anyone who’s ever been a part of some fun side project will tell you, the fun is derived from doing it together with friends that you like. In Soma and Megumi’s case, I think the fact that the two are teaming up and working together, is I think a boon for both of them. Its also great for the audience I think, since its really really easy to root for and get invested in that particular team up, as well.

And Megumi’s addition really helps out Soma, as not only does she survive the gauntlet of spicy dishes as a taste tester, but she also helps procure the equipment for their eventual solution to compete with Kuga. While Kuga’s got his spicy Sechuan food to make his giant restraunt stand out, Soma is trying out some Taiwanese food in Black Pepper Buns. 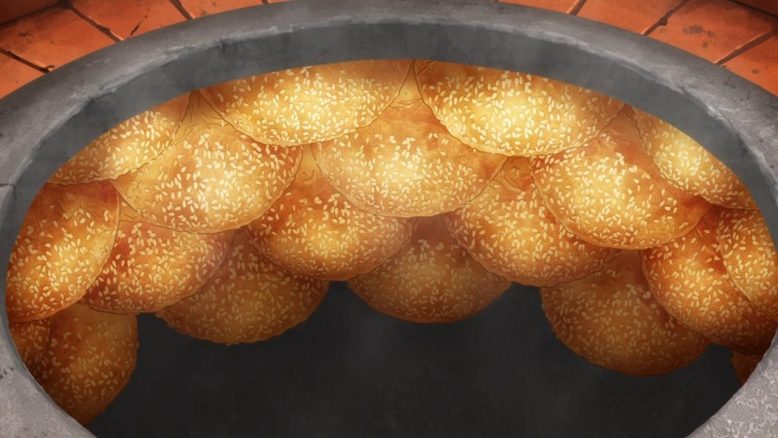 Shokugeki no Soma – An anime with lots of great food art.

We see said Black peppers buns in a post credits scene, but what’s interesting here is that both dishes being offered here, are dishes I’ve never actually tasted myself. So once again, there’s the rare case of me having to take Shokugeki no Soma’s word for how they’ll taste, and have the show help me imagine their splendor. I will say that, presentation wise, both dishes look fantastic, so there’s that.

The final thing worth talking about then, I suppose, is the pacing. And well… The pacing is still pretty darn fast and almost rushed. I remember the manga feeling like it lingered more on each scene and event a bit more than what we get in this episode, which is bizarre because this show has a good 24 episodes to go. I can’t imagine why the show is in such a rush, especially because the arc in question is so good that it deserves the extra bit of time that its potentially not getting. 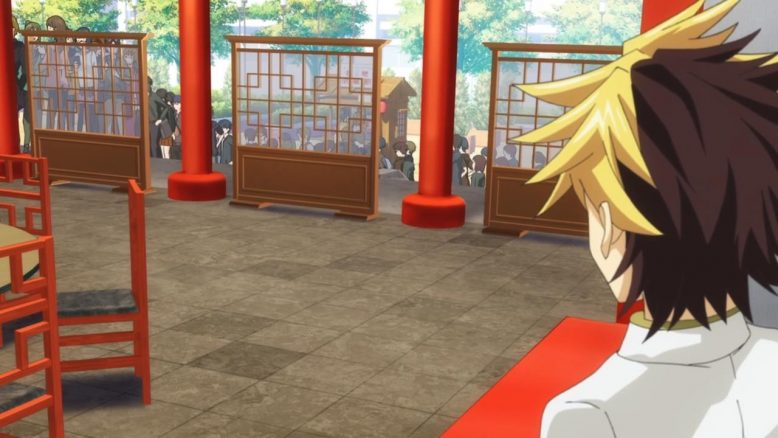 In the end, I can’t say the pacing is terribly off, or super rushed, but it does feel a bit brisker than what we got in season 1. It remains to be seen if the rushed nature of the storytelling is actually going to become an issue, or if the show is just blazing through this first arc’s setup in order to get into the larger drama that happens in the middle. The setup is serviceable, but I’m never one to be excited about shows not taking their time. I suppose we’ll see where this all leads, next week.