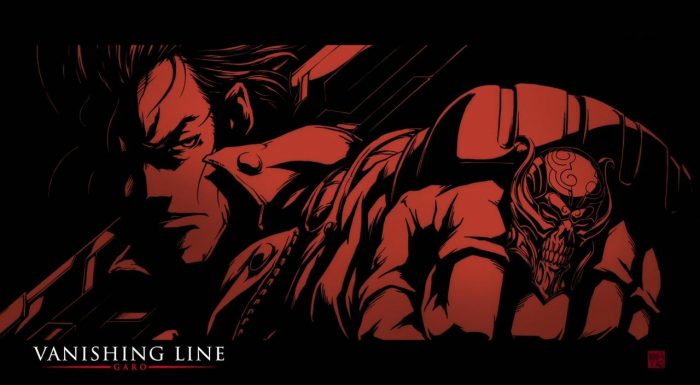 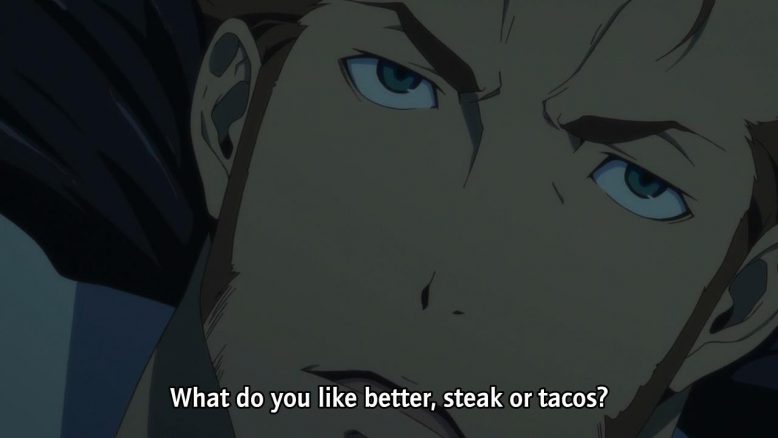 Is Steak Taco not a valid option here? O_o

With a line like that, its hard not to wonder about whether what you’re watching is actually an anime series from the GARO franchise or something else entirely. I say that, as a relatively casual fan of the GARO franchise, having only really seen the 2005 original anime series prior to watching this premiere. GARO (the franchise) itself is a bit of a recent discovery for me, As I bulk watched the first series not too long ago, after having met a bunch of rave fans of the franchise at AnimeMidwest earlier this year. 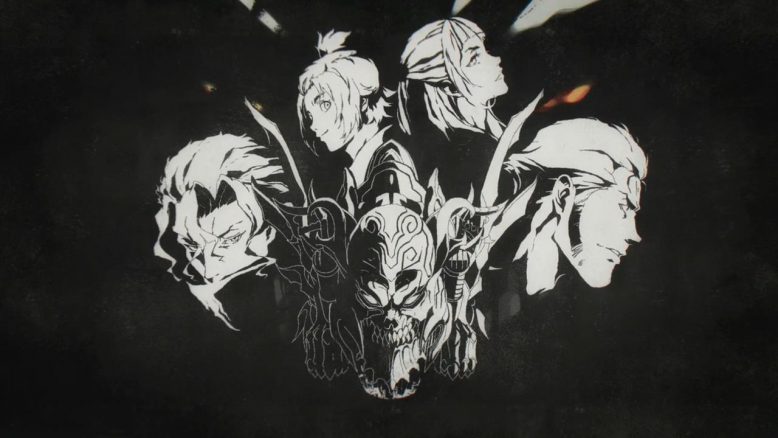 Gotta hand it to the series, it sure has some nice visuals!

The original Garo was kind of an acquired taste, a weird mishmash of traditional fantasy, some oddly shiny CGI animal armor and a complex adult story that spanned multiple generations of characters. Weird and off quilter, the original GARO had a unique tone,vision and a charm to it that instantly developed a following. The show took some established tropes from the Early 2000s and did some rather interesting things with them, whether it was with its tortured main character or its idea of romance. I originally missed out on Garo because it really was a weird gem of its time, with a particularly bad first episode that didn’t really show off the overall quality of the series itself.

Now, in late 2017, its interesting to note that the first episode of Vanishing Line – Garo, is playing with expectations again, and taking the franchise in a new, rather odd direction. Far from the traditional fantasy story of knights and princes fending off monsters for the common man, Vanishing Line actually features a buff biker dude named Sword, as the Garo (Makai Golden Knight) of this particular story. 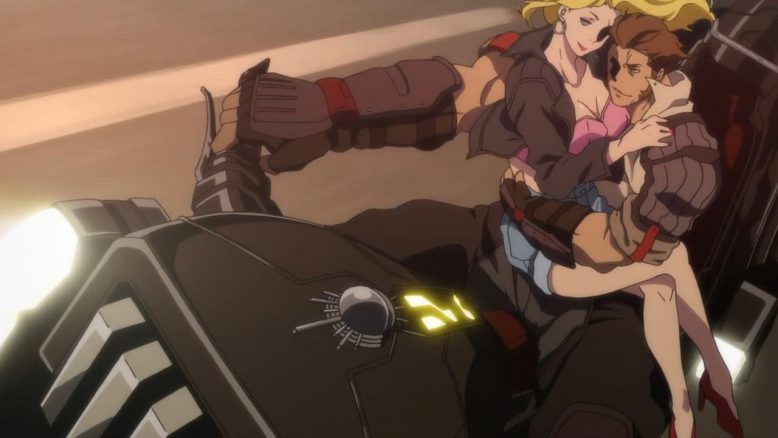 The biker thing isn’t the only big change, however, as this series is not only set in contemporary times, but features the United States as a backdrop. Stuff like like social media and the inter connectivity of phones, the internet and Japanese stereotypes of America seem to be a big part of this series’ overall vision. But Beyond all of that, the most notable thing here is that the show has this weird idea of what it thinks “cool” is, with bikes, swords, muscular men and a sort of grungey punk feel, that dominates said vision for the whole show.

Its worth noting that Vanishing Line does ooze with visual style. There’s gorgeous animation (and a particularly good use of 3D cellshaded CGI), stellar character designs and solid art direction all present here. So yes, I’d say there’s a lot of style and flash to the show, which is probably the one strength that I think will captivate whatever audience ends up sticking around past this episode. While the style is there, what isn’t quite so evident this week though, is whether there’s any substance or depth to the story or characters in this show. 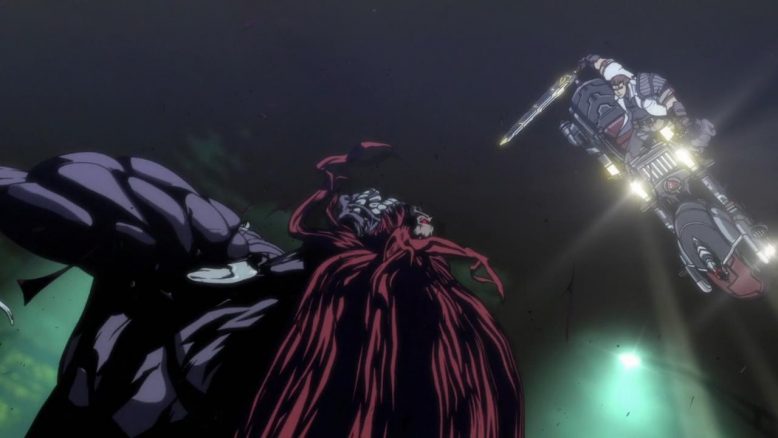 As I mentioned earlier, the Garo of the series this time is a guy named Sword, and Sword is probably what you’d get if you mixed Herman Luis from the original Garo with Dante from the Devil May Cry video game franchise. He spouts cheesy one-liners, uses weird wrestling moves for his attacks and gawks at women’s chests like a creep. Its hard to place what kind of character Sword is yet, or even if he is anything other than an attempt at personifying a muscular bad boy biker stereotype, but I suppose its only the first episode, and we don’t really get much quality time with the guy yet.

Most of the episode actually features a girl named Sophie, who serves as both an audience stand-in and a sort of protagonist for the show’s big introduction of the whole Horrors and Makai Knights schtick that every Garo story needs to have. The almost non-challant way in which the show kind of glosses over its world’s rule, and throws world building aside for more flashey action scene time, does make me wonder about the potential for the story. 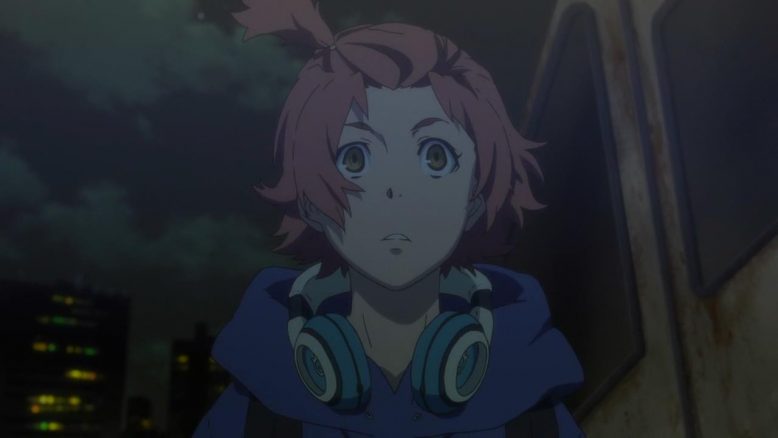 Sophie for her part, played by Kugimiya Rei, is an odd mix between a young girl that’s lost and searching for something, and seems capable at the same time. Again its hard to place just how much nuance there really is to Sophie, and I think having Kugimiya Rei play her doesn’t actually help matters. Part of it is because I feel like Rei doesn’t have a lot of range, and there’s a reason that she gets type cast for girls that are slightly younger, rather than the slightly older and more capable teen that we see in this week’s episode.

As for the story of the episode itself, Its a pretty standard setup. We join Sophie as she searches for some clues regarding a certain person she’s looking for, with the place Eldarado playing some part in her big quest. Sophie’s search actually leads her to a fortune teller, who winds up being a Horror, and she’s then saved by none other than Sword. What comes after is just a bunch of rather awesome looking flashey actions scenes that culminate in Sword basically taking down the Horror in question. 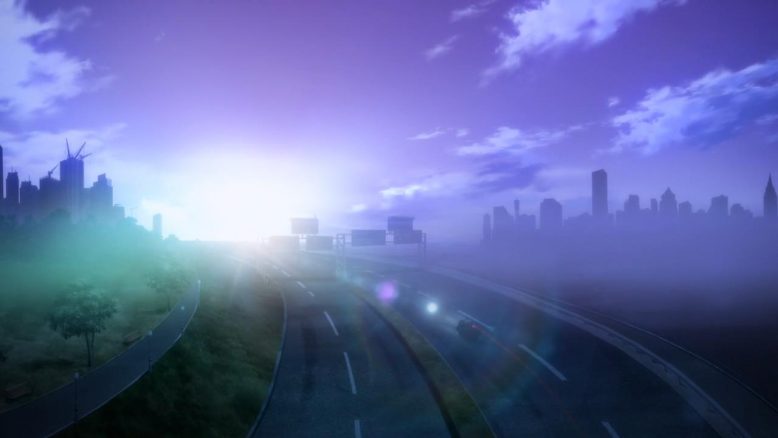 Awww yeah, sunrise on the highway! Its a Biker’s dream to ride off to that right?

And after 24 mins of Vanishing line, the best I can really say is that it just looks gorgeous and has a sense of style and action that makes me curious to keep watching. I think that’s fine too, as not every show I watch has to move me to tears or have some deep, complex plot.

Shows opening with an episode like this one, which really was just a collection of scenes featuring some really nice eye candy, are fine too. Moving forward though, it’ll be worth seeing if the show actually manages to keep the visual flare going, or if there’ll be something else that keeps me hooked. To that end, I’ll be eyeing Vanishing Line for at least another week, before I commit to blogging it or not, so lets see what the show gives us next weekend.