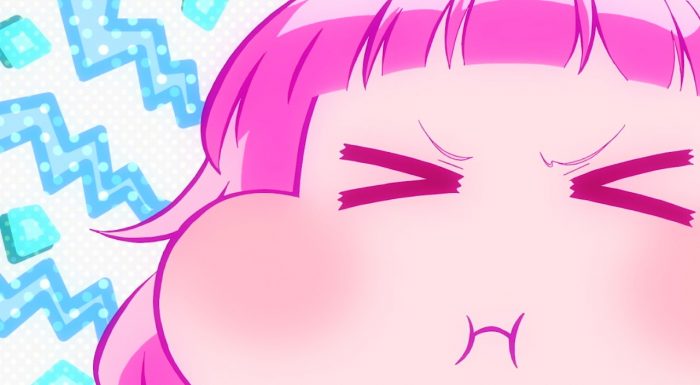 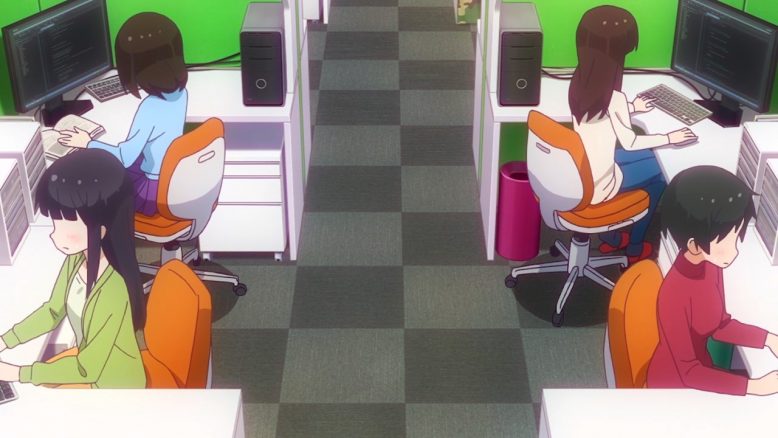 The issue between Naru and Nene definitely takes the foreground in the first half of this episode, but fortunately, thanks to Momo, we at last learn the root of it. It’s a story that’s fairly common in anime, and probably in some people’s lives: Naru’s parents don’t approve of her career plans. Instead of being a programmer they want her to take over the family inn, following their plan for her life rather than her own. Because that she has been forced to support her own way through vocational school (which I am certain cannot be cheap), and she ended up making a bargain with her parents that if she doesn’t manage to get a job at Eagle Jump, the first company she tries, she’ll give up and return home to do what they want. 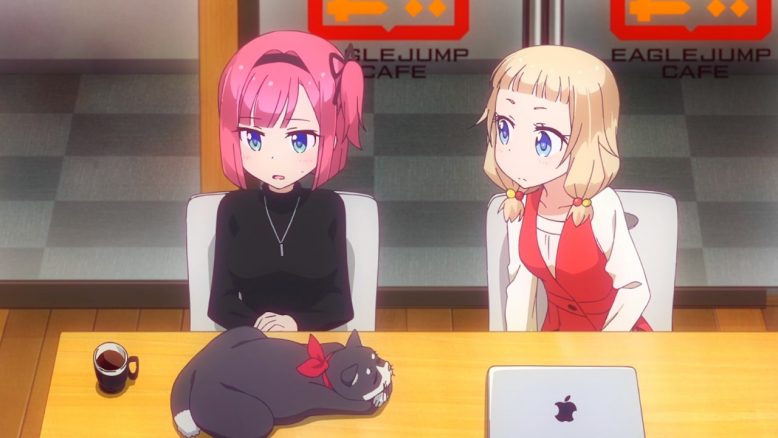 Because of this Naru has worked hard to try to become skilled enough to make it into the first company she’s trying for. Getting there and meeting someone who seemed to have gotten in solely because she knew somebody; who admitted that she had no direction and had taken up programming entirely on a whim; there’s no question that struck a nerve with her. It must have seemed that Nene was mocking everything Naru had done; everything she was trying to do. 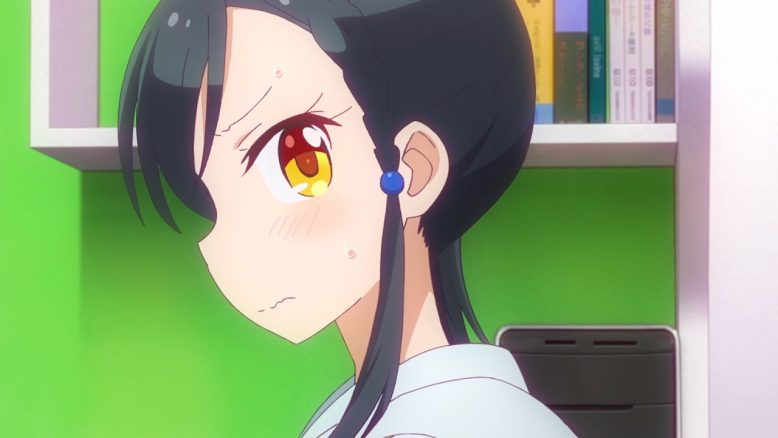 However, Nene wasn’t hired out of nepotism or pity. I’ve said it before, but while reassuring Momo about Naru, Ko actually says it outright herself: Umiko isn’t the sort of person who would hire someone for reasons like that. And a person who was hired for such reasons would only end up suffering when they can’t keep up with everyone else. Ko says it to show that Naru will be hired or not based on her own merits and nothing else, but I think it does have a second unintended effect of reassuring Nene about something she may have worried about ever since Naru first accused her of it: Nene herself is here because Umiko believes she can handle being here. That matters. 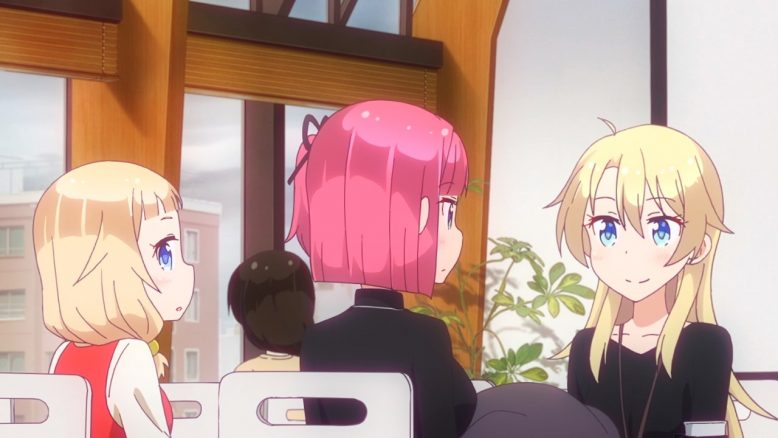 This leads into the emergency programmer meeting, and the revelation that Naru has been going light on testing in order to get her code done more quickly. Apparently she believed that if a particular bit of code had worked correctly once it would work correctly every time, or some such thing. I’m not going to comment on the advisability of that. What matters here is that she’s plainly screwed up in a moderately serious manner, and she’s in despair that’s she’s ruined everything, wasted all her effort and the time everyone has put in. Her pain is clear to see, as she struggles to hold in tears. 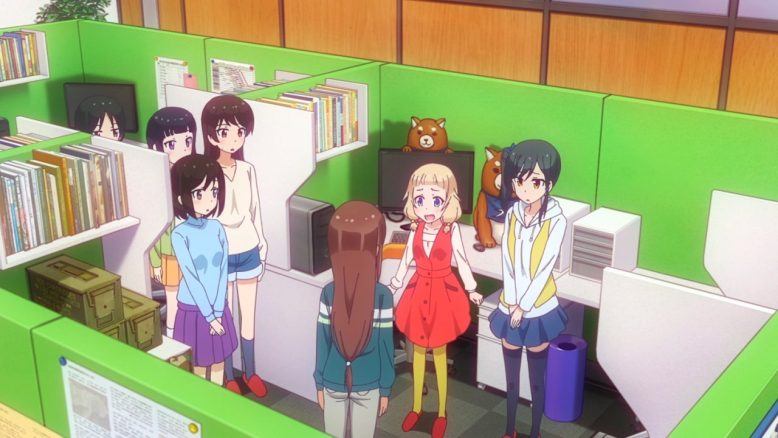 Into this Nene steps in, derailing everything with her own plan. She, with her experience in testing and debugging, will hunt through Naru’s programs and code and dig out all the errors, while Naru will focus her attention solely on fixing them. While Umiko expresses doubts about whether the schedule will support it, she gives them permission to get started. It’s heartwarming seeing the two of them take a moment to talk and start to mend things between them. As Nene says, in the end she’s a pretty simple person. She doesn’t hold a grudge or demand a more complex or tortured backstory for Naru before she can forgive her. Just learning the truth is enough to make her want to support Naru and accept why she acted the way she did. And over the course of what appears to be at least five days (based on clothing changes), and probably mostly staying overnight as well (given the increasing number of energy drink cans in each shot of the montage), they manage, finally, to get it all done. It is a moment truly worthy of celebration. 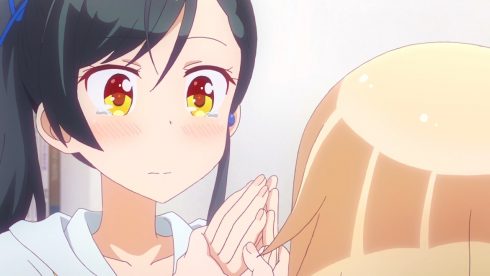 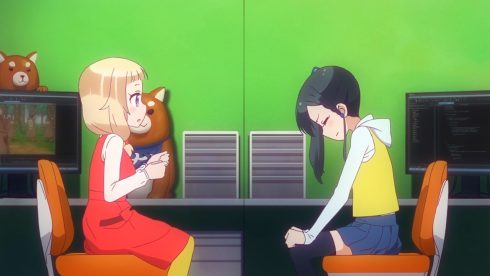 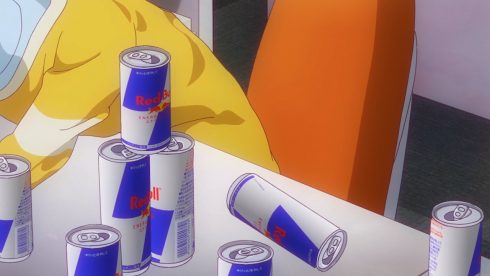 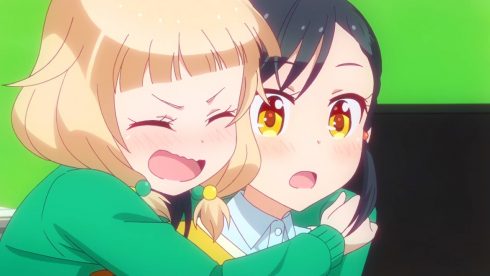 Now I do feel the need to take a second to engage in a bit of speculation here. Umiko’s comments here after they finish and a bit later do make me wonder if perhaps this crisis wasn’t actually as serious or as legitimate as it seemed. She indicates to Ko that she knew all along that Naru had a sharper edge underneath her friendly surface, and that mixing her and Nene was like setting cats and dogs together. She’d clearly caught the atmosphere between them, and she indicated as well that she could have dealt with the issues with Naru’s code even in Nene hadn’t stepped in the way she did. Even though she brushes that off as a joke, I have to wonder… I can’t prove it, but I find myself speculating that maybe she actually became aware of the issues in Naru’s code much earlier, and (while keeping an eye on them to make sure they didn’t truly become serious) chose to leave them alone specifically in order to engineer a minor crisis exactly like this. While I doubt she expected Nene to learn something that would drastically change her opinion about Naru, I think she was counting on the fact that Nene is, at heart, a good person. Even before finding out the truth about Naru, Nene was still doing her best to help her. Even without speaking to Momo, it’s still an almost certain bet that Nene would have stepped in and offered to try to fix the situation exactly as she did, and that would likely have set Nene and Naru on a path to working out their problems even without the knowledge from Momo. Like I said, I have no proof, but I wouldn’t be surprised to discover that Umiko had engineered things to go something along those lines. I doubt she would have let the situation get bad enough to warrant being called an emergency otherwise. 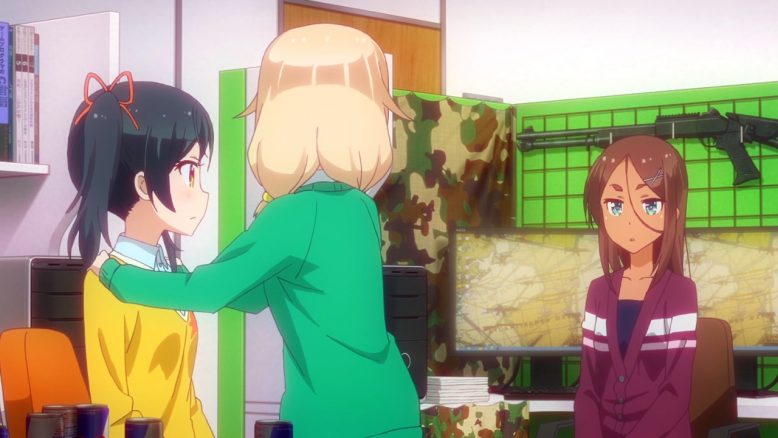 Now that I’ve spent over 1000 words talking about the first half of the episode, on to the second half, and the part that I suspect people care more about. As I said last time, something has been up with Ko, and now we find out what it’s been. She’s planning to leave Eagle Jump. We catch her speaking with Christina about it twice, as well as making other ominous comments here or there. What’s worse, though, is that Rin overhears her. There’s not much that needs to be said about Rin and Ko’s relationship that hasn’t been said before, but the idea that Ko is going to go away and leave her behind clearly tears at her heart. What Ko’s reasons might be for doing this… who can say for sure. Professionally one can see that she’s no longer doing the job that has been her passion for years, and indeed with the development of the teams and the growth of Aoba and Hifumi and everyone it could be said that she is no longer needed to do the things that have defined her life at Eagle Jump for the past 8 or so years. The chance to seek out a different (probably larger) company where her reputation would get her a character designer slot with no questions asked is something that may be hard to pass up. Also, even though it worked out with minimal resentment, the whole issue with the key visuals and the game’s marketing undoubtedly left a bad taste in her mouth. That’s the sort of thing that can and has led to big industry names resigning and heading off to either join a new company or found their own in the past. 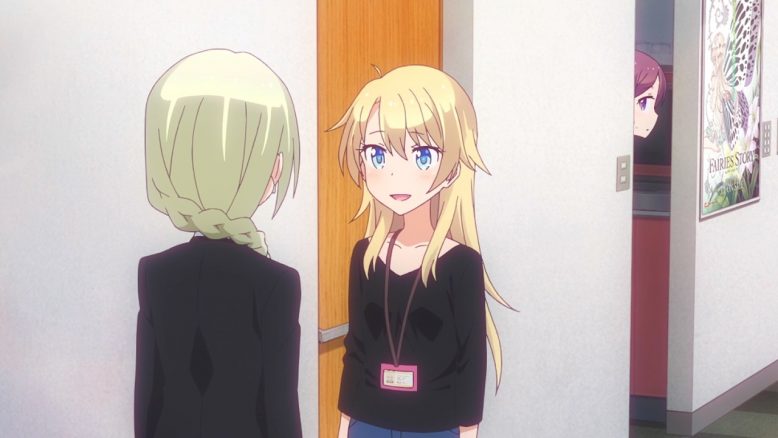 Regardless of her reasons, though, Ko leaving is going to hit Eagle Jump like a metaphorical ton of bricks. She is not only the face of the company, she is also much of its heart. There is not a single person there who doesn’t know and respect her, and she has been a personal inspiration for several of our primary characters. Even if, from an organizational standpoint, the company should still be able to go on fine without her, from an emotional standpoint her departure will leave a great gaping hole in the soul of Eagle Jump, and no one there could even try to fill it. 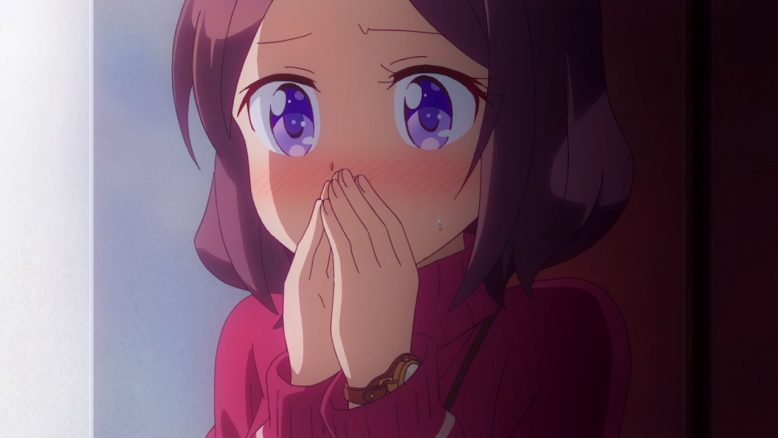 Only one episode left for this series, and it promises to be a doozy. I expect a lot of tears and bittersweet moments and “even though we’re apart we’ll still be doing our best to fulfill our own dreams so we shouldn’t be sad” kind of comments and such. There will be feels. How well will this work with my cheerful cute women making cute video games cutely series? I don’t know. I’ll just have to wait and find out, I guess. 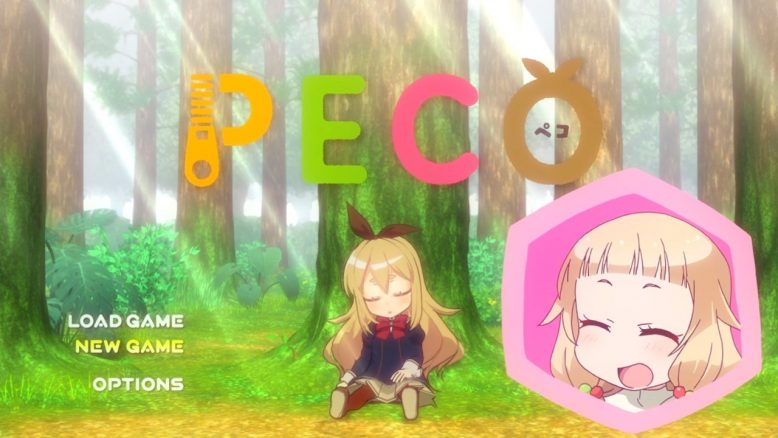 Guys, stop. You keep making games that I NEED to play. I can’t take this.