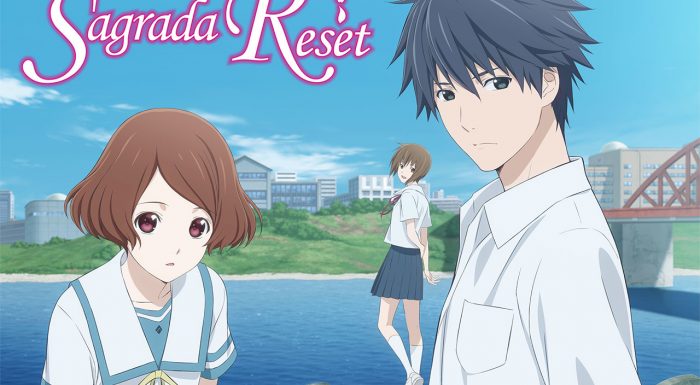 Every so often, I’ll encounter a series that just speaks to me, personally in a very specific way. Intrinsically I’m aware that… This isn’t a series that I can wholeheartedly recommend to most people. I know that, but… At the same time its so hard for me to not like said series and root for its success. Sagrada Reset is a series like that. Its a series that probably won’t appeal to everyone, but one that I believe, definitely has something special, for the right audience. 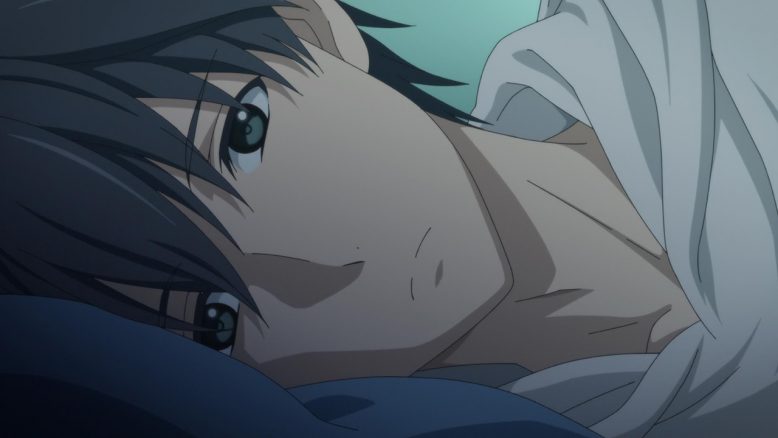 Which begs the question, just who is Sagrada Reset’s target audience? Who are the people that will find enjoyment in a show like Sagrada Reset, similar to how I did? And the answer to both those questions, is really a person who enjoys intricate plot-work above all else. Saarada Reset has many things; solid art direction, an interesting premise, decent characters, wordy often times monologue-like dialogue, but what it really has, above all else, is a story that is extremely complex and very well thought out. 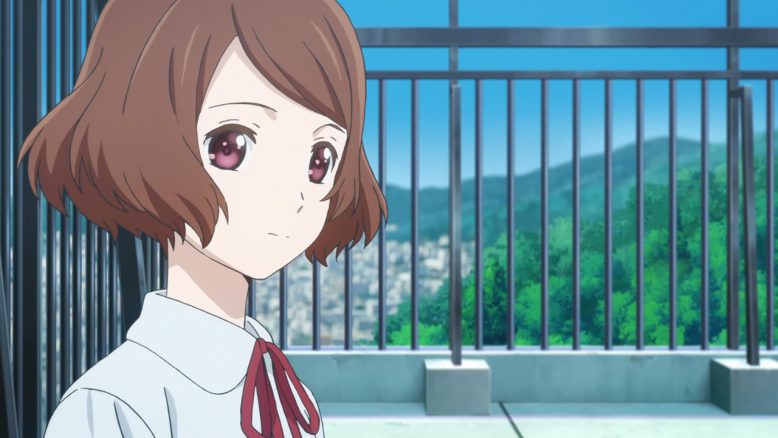 There’s definitely a sense that Sagrada Reset’s story was made in a medium that focuses on words, and telling rather than showing. If you were to, thus, distill the series down into its core elements, I’d say that the show is very much “a collection of events and scenes that feature conversations between various characters”.

The first thing that’s worth noting, however, is that these events and scenes are definitely presented  at a pace that can only be described as immaculate. Sagrada Reset has a story it wants to tell, and each arc story, each mystery, is beautifully crafted. The show is just an expert at nailing it all, whether its a solid beginning, middle or end. The build up is always great, the start of every story never the same, and in the end, the conclusion that the show arrives at feels earned and deeply satisfying.

The show does this dance, as it moves from plot point to plot point, revealing just enough in the moment to keep things interesting, while not revealing all its cards until the very last moment. But! In between each plot point, each major revelation, is a very notable string of conversations. 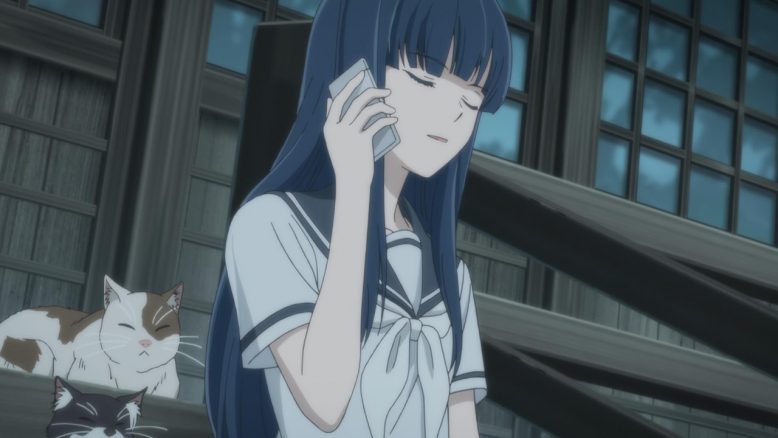 There’s actually a lot of emphasis on the activity of conversation in Sagrada Reset, and deep, long winded conversation at that. And I think that conversation, is the first thing that’s bound to throw a lot of people off. We have high schoolers and middle schoolers talking about morality and philosophy as if they were literally in a philosophy class, vying for top grade in the course.

There’s a lot of words, famous phrases and ideas thrown into the conversations that the core cast of Sagrada Reset have, and while the show definitely tries to make its characters appear clever and deep, its unfortunately quite apparent that the end result is far from that. 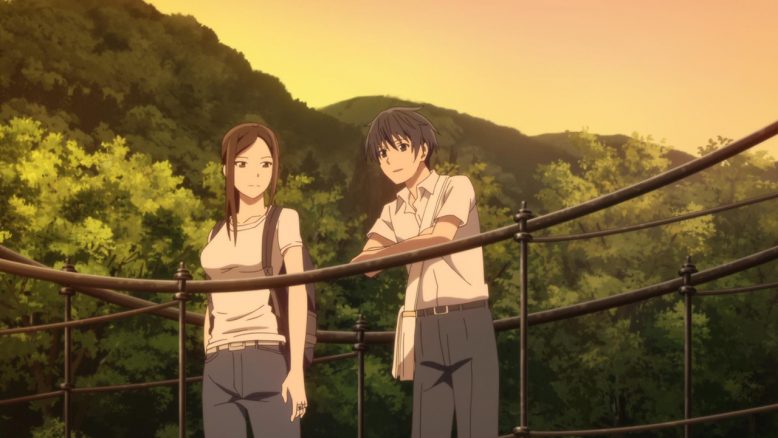 Sagarada Reset doesn’t have a bad cast of characters though, and despite the huge amounts of information that they all spew from their mouths, there’s a good deal of quirkyness and intrigue to be found, as the show dives deeper into them in due time. Its just hard to see that depth that’s buried deep under a mountain of long-winded dialogue that’s built to push the show’s plot forward more than anything.

Speaking of which, the show itself definitely has a pretty interesting premise. The show primarily takes place in the town of Sakurada, a place that’s indicative of any small Japanese town, the special thing being that everyone inside of that place, has super natural powers. 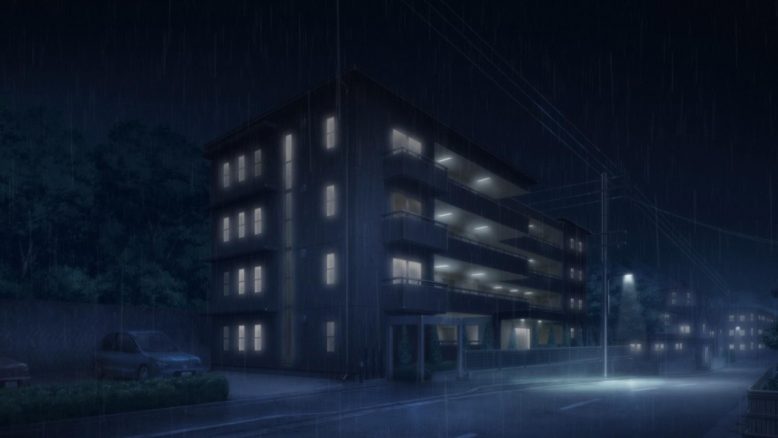 No that’s not the original bit… The original bit, is in the two primary characters and their powers, specifically. Sagrada Reset stars Asai Kei and Haruki Misora, and its in the pair of these two characters, that the show begins to show the depth and ingenuity that it displays throughout its 24 episode run. See Kei has a seemingly useless power, he has the ability to remember and recall anything and everything. Where it gets interesting, of course, is when he ends up meeting Haruki, the girl who has the ability to reset time for everyone and everything, and dial everything back to a particular point that she’s “saved” at before.

Haruki herself can never really tell if the reset has happened, but that’s where Kei’s powers come in. Kei remembers everything, even things that have happened prior to a reset, and its with this particular combination, that the two navigate and solve a bunch of mysteries and trials that culminate into a larger ongoing event that determines the fate of the entire Town and all its residents. 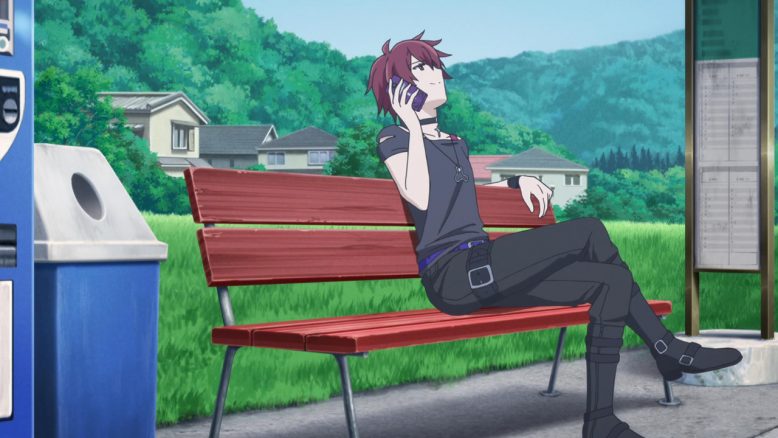 The joy and the entertainment value of Sagrada Reset lies in how it constructs various rules for its powers and characters, and then has them systematically do creative things within those very confines. The logic for every story arc, every situation that Kei and Haruki find themselves in, remains in tact, and its a sight to behold as the show slowly peels back the curtain, and reveals its clever little tricks and solutions to every problem it presents.

That logic, that feeling of genuine surprise and wonder as the show demonstrates a deep mastery of storytelling, plot resolution and mysteries in general, is what makes Sagrada Reset stand out as something truly worth watching, despite its own problems and weaknesses. Characters and their actions will definitely stray in service of the plot, and there’s a weird tension that results from the show forcing its characters to act a certain way, but still maintain their sense of self. 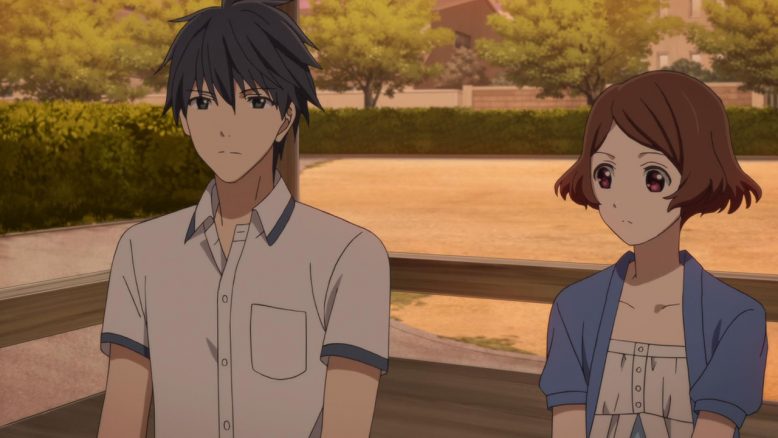 Kei is probably the one character that truly acts as if he has any sort of agency. While most of the other characters are driven by the plot and events that encircle them, its Kei that ends up being the driving force for change. Its Kei’s decisions, whether they’re good or bad, that end up resulting in any kind of change and progression, and the show takes great joy in examining the implications of all these facts, numerous times throughout its runtime.

The show’s definitely interested in deep topics like the meaning of existence, what it means to be strong, what it means to be happy, how people should deal with others e.t.c. but The show doesn’t have a core theme that it focuses on. Rather than making some central point at all, the show has its stories and mysteries act as a sort of canvas to at most, highlight various common philosophical questions.

What makes the show work, in the end, is I think, the fact that it has a very opinionated, if shallow answer for every question it explores. Sagrada Reset isn’t some elaborate exercise in deeper thinking, but rather an entertaining story that uses some interesting ideas and common questions as backdrops and excuses to tell some really entertaining mystery stories. 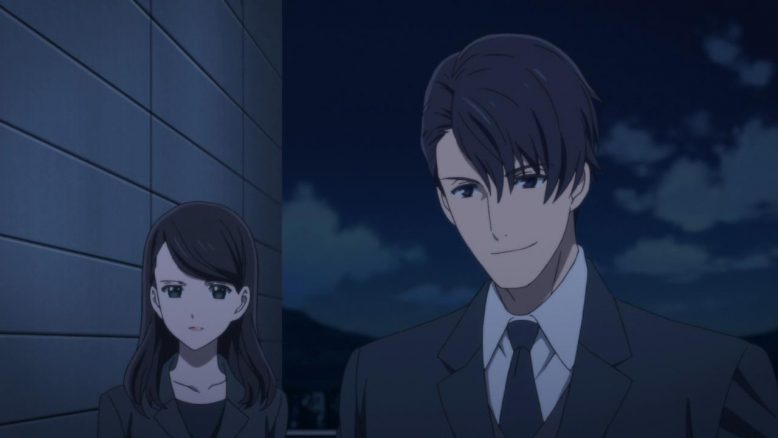 Which is why, I believe that the show is actually great at providing the illusion of intellectual depth, when what it really has is just solid and entertaining mystery stories. The thing is though, that at the end of it all, the devices and ideas that the show uses to spin its entertaining stories, do ultimately, work. The fact is that the show does manage to grip those audience members who can wade through the sometimes meandering dialogue and it rewards those viewers who pay attention with some great twists and turns.

It also helps matters quite a bit, I’d say, that the show has great production values (thanks to Studio David Production). The animation is competent and there sure, but the real starts of the show are the art direction and audio work. The show just looks gorgeous, with the beautiful small town of Sagrada really brought to life with lush greenery and a nice mix of traditional and contemporary Japanese architecture. Sagrada Reset, through its art direction, has a real sense of atmosphere and tone in every single scene it presents. 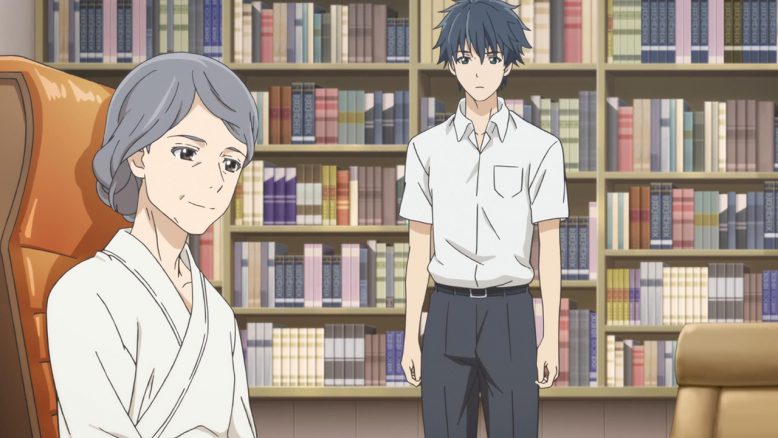 The music really does match the visuals, and the two combined, create a real sense of wonder and energy that’s uplifting most of the time, and really really dark, when needed. Whatever part of the show you’re at, Sagrada Reset nails the tone and feel of the scene its putting before the audience, and it does it with a combination of solid production values.

The one place where I’d say the show is a bit spotty, is actually the voice acting. The main leads are definitely decent, with Kei perhaps himself being the best voiced character. Other seiyuu will definitely oscillate between great to average, and its I think the script and the story, that really puts a strain on the seiyuu. Its hard to sound natural and life like, when characters like Haruki are meant to be sort of odd and emotionless, or characters like Soma Sumire, are meant to be really overly dramatic and intense, while still feeling coy and clever. 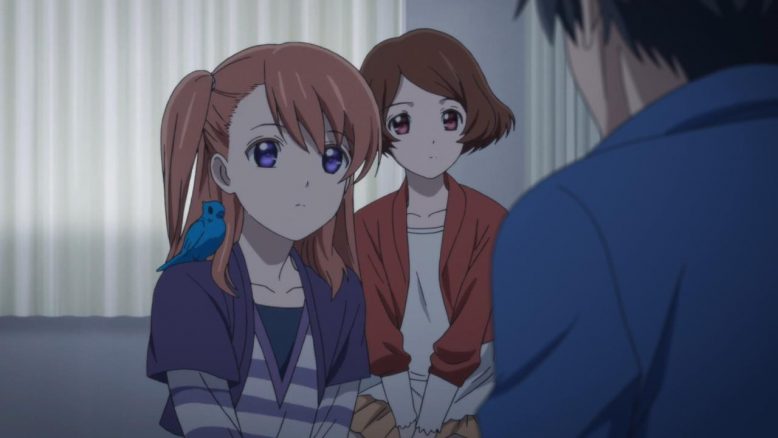 Some succeed more than others though, and I think its a combination of the dialogue and the voice work, that lead to a somewhat uneven cast of characters. The main trio of the show, Haruki, Kei and Soma, are perhaps the people who get the most development and actual character arcs, but they’re also the characters that feel the most inhuman, given the things that they do, and the ideas that the hurl around. Its the character work, in the end, that requires the most extreme suspension of disbelief, and its I think the one flaw that holds Sagrada Reset back.

In the end, I’d say that Sagrada Reset is made for people who enjoy solid, intricately done mystery stories, and who are willing to sacrifice things like extremely solid character work and snappy dialogue for said stories. Its hard to call Sagrada Reset a masterpiece, because it doesn’t nail one of the fundamental things that a good anime series needs, which is the characters and their dialogue. 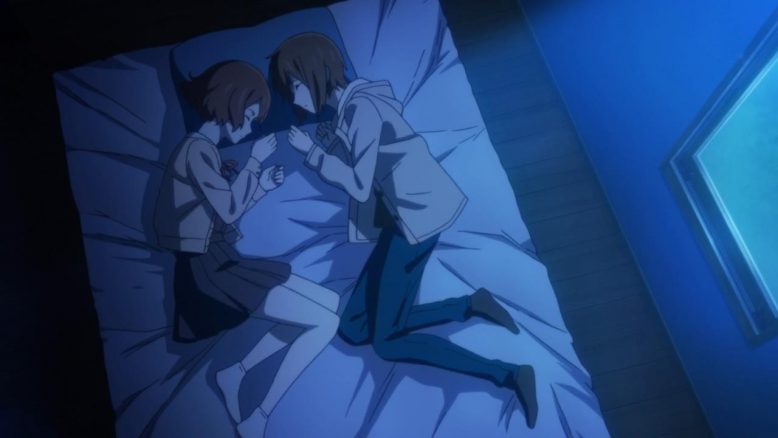 On the flip side, the show really really goes above and beyond on the storytelling, plot work and pacing side of things, and its there that I think it edges a victory over most of its contemporaries. Sagrada Reset isn’t for everyone, but for those looking for a deep, engaging and twisty collection of mysteries, there’s definitely a lot to be gained.