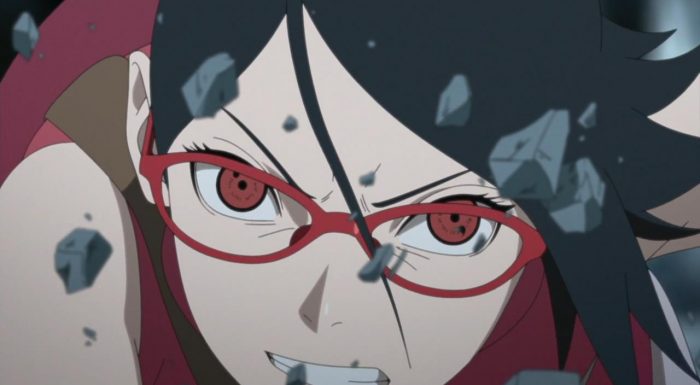 Well, that was a solid if somewhat standard conclusion to this latest Boruto story arc. While the arc itself was called Naruto Gaiden, and was adapted from a Naruto story, the story it featured felt like more an origin story and backstory for Sarada Uchiha, one of  this series’ primary characters. And as far as character backstories go, I’d say Sarada may have actually gotten a really really good one, maybe even one of the best ones in the Naruto/Boruto franchise as a whole.

Look, I do realize that a big reason for Sarada’s family backstory arc being as good as it is, is because its the first real “backstory” arc we’ve seen in this series. Boruto himself, for example, has already had his own introduction/backstory, and its a story that’s been outside this series, set in a future “part” of the franchise’s timeline. Boruto’s first introduction, was a full length theatrical film, and thus the series can’t really offer a grand introduction for its title character. 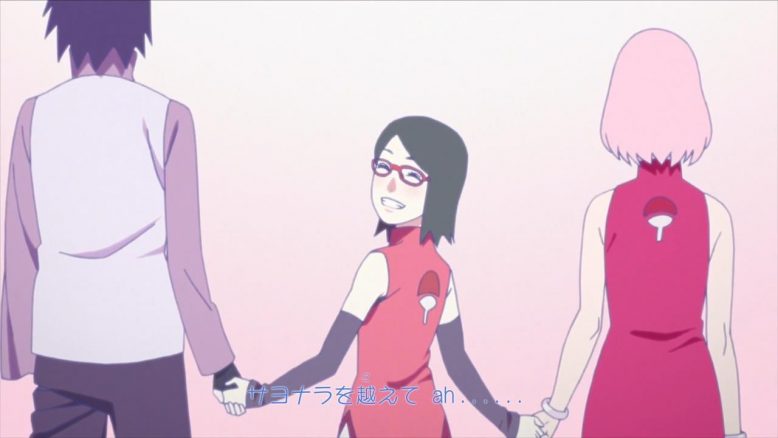 The solution? Do something just as good, if not better for the other primary character in the cast, Sarada. And Sarada’s story? Well, its been good to the point where I’d dare to say it has her almost overshadow our main lead  for the series, by a significant margin. That prominence that Sarada’s gotten in the series with this latest Naruto Gaiden story arc, definitely changes things in the series. This change of Sarada’s growing importance is, in my opinion, actually a good one. Its good, because it not only sets up Sarada sa a powerful characters, but puts into place an interesting dynamic that the series can leverage in the future, i.e Sarada and Boruto, and how the two will play off of one another.

But! Before we get into any of that, I suppose its worth addressing the elephant in the room regarding this latest story arc. Last week I gave the show (and manga by extension) some real praise for tackling some pretty dicey subject matter. Last week, I dove into how I felt the show used Sarada to explore the idea of a child out of wed-lock and what that does to the child itself. Sarada was touted as being a bastard child to a rather prominent character (Sasuke), and the way both Naruto and the show dealt with that particular fact, was pretty mature and nonjudgmental.

That outlook, that perspective was not only refreshing, but very impressive to see. Naruto and the Boruto series pushed toward the idea that, whatever the social structure and belief system may be present in a society, the child in that society should never be punished for the actions or mistakes of their elders. 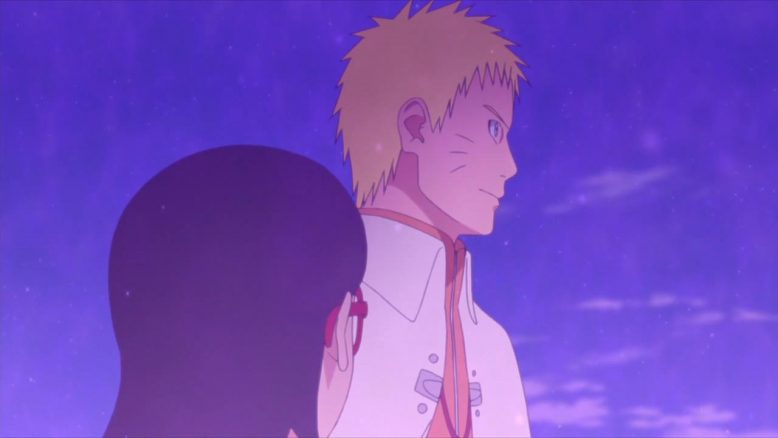 Sarada was in a good deal of pain, dealing with the ramifications of what her father had done, and it was only until Naruto came in, that things got better. The larger message he present was pretty clear, at least to me, i.e that our actions define how we are and how strong our relationships are, rather than our where we’re born and who our biological parents are. It was a solid and powerful moment.

The problem this week of course, is the fact that this episode pretty much retacons the notion of Sarada being anything other than the biological child of Sasuke and Sakur=. Is that a problem? Is it a cop out? Perhaps. Does it change anything? I don’t believe it does. 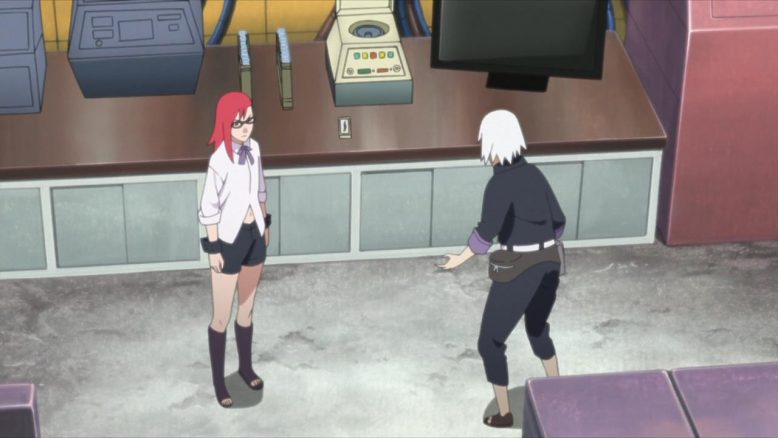 See, to me, the series has already made its point; Sakura is Sarada’s mother, regardless of biology. The fact that the series goes on to say: “Wait, actually Sakura IS indeed Sarada’s mother” is actually not all that important, as far as I’m concerned. In the important moment last episode, the story had at that point, made Sarada’s situation real and painful, and her transition out of it graceful, so the reality after that part of the story, can be whatever it wants to be as far as I’m concerned. I don’t think this one change, renders the actions of certain characters, or the message from last week any less important.

Naruto helped guide Sarada through some difficult times, and when her own family was on the brink of collapse, it was the village’s elder, the leader, that helped guide his youngest generation to  the right path. He established that family and bonds aren’t superficial things, rather things that are cultivated over a life time of well.. Living. 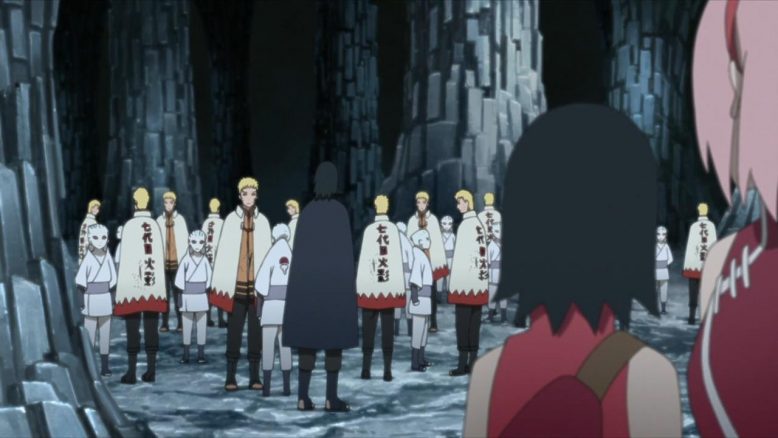 So… As far as I’m concerned the arc made its big thematic point last week, and what we needed this week was a nice little conclusion to tie everything up neatly. And Really, this week did that quite well I’d say.

We got some nice moments of the original three protagonists, Naruto, Sakura and Sasuke, fighting and wrecking havok together for one. The entire big fight scene with Shin and Sakura, was gorgeous, with some really smooth flowing dashes and aerial combat in the rather huge open space.  There was a nice little resolution for the whole Shin character, with his own clones turning against him, only to have Naruto steer even them on the “proper” path. 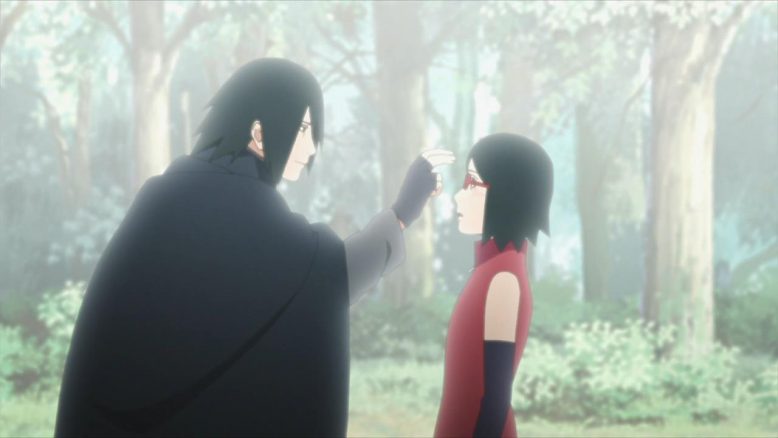 We also got, I think, a nice collection of tender moments between the members of the Uchiha family as a whole. I’ll admit, it was a bit weird seeing Sasuke suddenly shift into a decent father, but I suppose him getting this opportunity to meet and get to know his daughter, is what changed things. The moments between Sasuke, Sakura and Sarada were pretty darn awesome, and I think seeing Sarada get a day of normal family time with the promise of more coming, was a nice little bit of progression from where we started in this story arc.

The one thing that was a bit puzzling was the omission of a key scene from the manga, which was none other than the family photo scene. In the manga (and yes, I have read it), the arc actually ends with Sasuke, Sakura and Sarada finally getting a family photo taken, to replace the makeshift one that previously resided in their home. The fact that the show didn’t show this was kind of puzzling, especially considering how nicely it created that sense of chemistry between Sasuke and Sakura, and their relationship to their daughter. Its a weird omission, and one that I’d be really curious to know the reasoning behind. 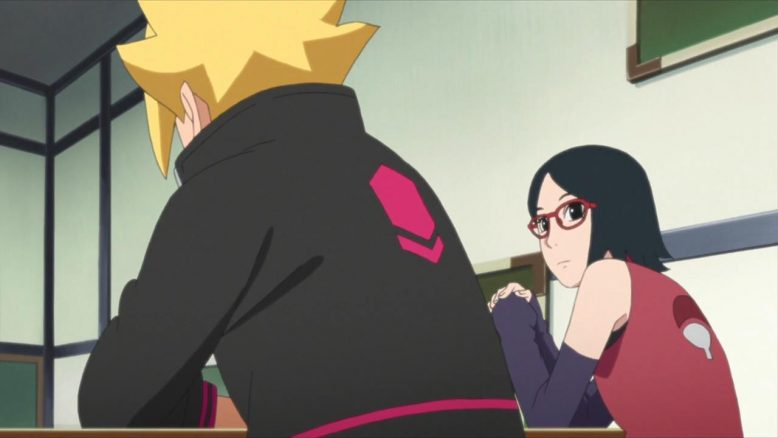 Beyond all of that, I think the episode led us to a pretty nice point, which was the moment at the end of the episode. We had Sarada finally reveal her big goal to Boruto, i.e wanting to become Hokage. We know how Boruto feels about the title of Hokage, so I’m actually kinda surprised he didn’t openly attack Sarada right then and there. I suppose Boruto’s matured in his own way, so it was nice to see him kind of passively keep his displeasure about that whole fact to himself.

Now, normally I don’t talk about previews at the end of episodes all that often, but this week its kind of worth examining a little bit. This final scene, and the tension that’s developed between Boruto and Sarada, is what the focus of next week’s episode is going to be. THAT, is pretty exciting, if only because it’ll be exploring and telling a story that leads us to the dynamic that we have for Sarada and Boruto when we eventually see them in the Boruto movie.

That, in itself, not only links this arc to the current Boruto storyline rather nicely, but it also makes this arc required viewing to understand the future upcoming stories.Color me both surprised and impressed, Boruto.