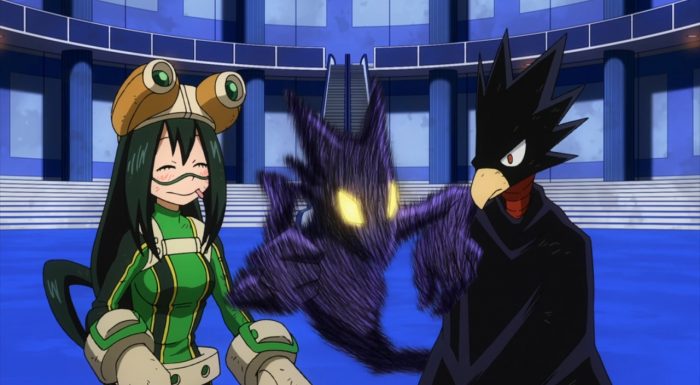 This episode really got the exam ball rolling. As one would expect from the title the main focus was on Momo and overcoming her issues. They’ve built this up since the sports festival. That didn’t go great for her in general. Mineta almost literally slowed her down which lead to an ok, but not great finish. She wasn’t quite suited to dominating that kind of race anyways though. After that came the 1v1 matchups and she didn’t do great there. It wasn’t an excellent matchup with Tokoyami being capable of striking quickly and Momo needing time to build things. Obviously that didn’t comfort her very much. She felt as if she failed and that hit to her confidence never fully restored. It didn’t help anything that she picked poorly for her internship and ended up with someone just selling their image and not really doing anything heroic. 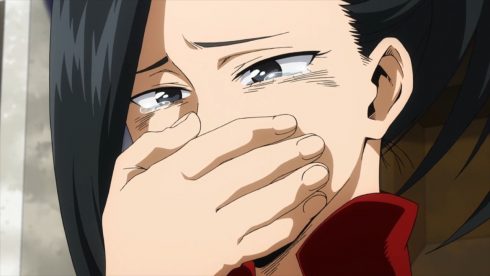 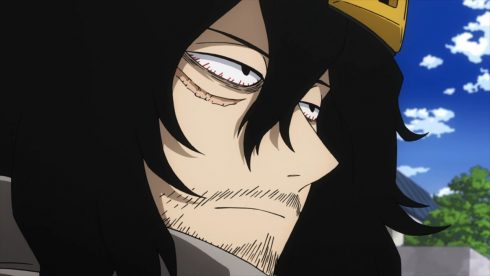 It took an event like this to really help get her confidence back. I’m glad in the end Aizawa took more care to act as a teacher and not just an examiner. There is no doubt in my mind that he could have ended that test so much faster if he wanted to. Frankly he could have really knocked out Todoroki to make sure he wasn’t coming back into the test and he could have caught Momo before she backtracked to Todoroki. I do think he wanted to give a chance for Momo to regain her confidence through this examination. And even when she screwed up he intentionally played into it in order to not sabotage the confidence she just regained.

His excuse wasn’t too bad, but I still don’t buy it. When he saw what she was doing he initially moved in and yet when she messed up he pulled back. If he was that wary about Todoroki he wouldn’t have gotten close once he saw that setup. Nothing against his intentions though. Momo really needed this. She needed to see one of her plans play out well and work almost perfectly. The sense of relief to the point of losing her composure told the whole story there. Though I do think they played up Todoroki’s errors in this test a bit much. He should know pretty well that he couldn’t realistically hold back Aizawa in close combat without being able to use his quirk. And couldn’t he burn the restraints and then freeze the caltrops while falling? 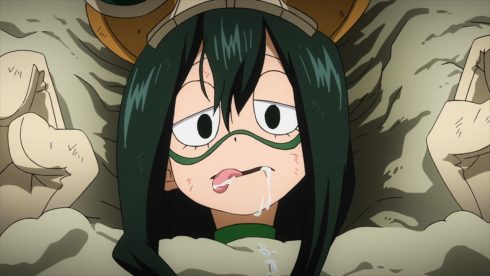 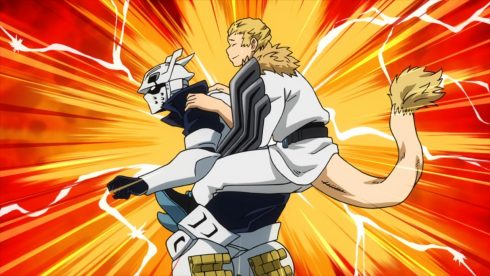 There is an interesting element in how both Iida and Todoroki initially went with a running solution. It feels like they’ve taken away the need to play it safe from their experience with the Hero Killer. They know what it is like being up against someone out of their depth and how risky it all is. And that was with someone who was judging and reacting to them for the first time. Their teachers know just about everything about their personalities and their quirks. And yet that doesn’t mean victory is impossible. They have a numerical advantage and their teachers are handicapping themselves. If the teachers weren’t weighing themselves down I’m not sure Dark Shadow would have been able to get those cuffs on even with the surprise of that tactic.

Still the tactics were pretty solid. You can see the teams that actually tried to plan things out properly. Iida and Ojiro knew what they were up against and didn’t see a good way to actually fight off their teacher. So they didn’t. They just went full tilt for the escape and didn’t give their teacher time to really respond to them. And it was some clever work done by Tsuyu and Tokoyami. It was a solid plan against them and a good plan of theirs to win. Tsuyu is a good all-rounder who doesn’t really lose her cool. She isn’t ever going to finish near the top of the class though because she doesn’t excel at many things. But Tokoyami has great strengths, his weaknesses are also more obvious. He needs a good teammate to cover for them and she did that. A smart move with the cuffs too. 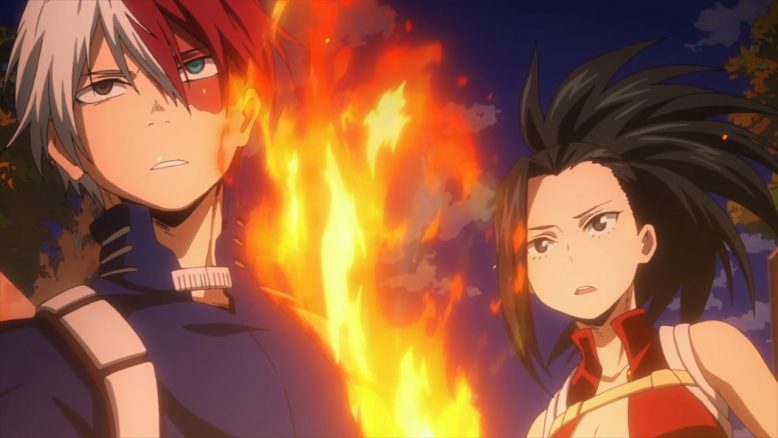 This episode did a nice job making you feel the aftermath of previous episodes. The obvious bit was Momo’s confidence needing regeneration. More than that though there was Aizawa’s physical condition. Sure he’s mostly healed up, but he’ll never be the same after that fight. The show didn’t kill him or make him unable to fight ever again, but his abilities are impacted. If he was the same as before that incident he probably has an easier time in that exam even though I still think he was pulling punches at points. And that is probably a good thing for the story. Actions do have consequences and you don’t have to kill a character off to leave an impact on the story.

I pretty well enjoyed this episode. The focus was pretty much on Todoroki and Momo and I’m good with that. Both characters are likable and it was interesting to see how things have changed them. Todoroki just going along with Momo’s plan was some growth anyways. He was a guy who first wouldn’t have wanted to use his flames at all and probably would have just done his own thing regardless. Momo needed all this to get her groove back. And it was clever that while she wasn’t confident she still had plans. She filled those things with flash grenades on her own logic and planning. She is a smart character who can do some crazy things. It is true that her ability isn’t the best in sudden attacks, but she’s got her strengths and shouldn’t neglect them due to failing once or twice.