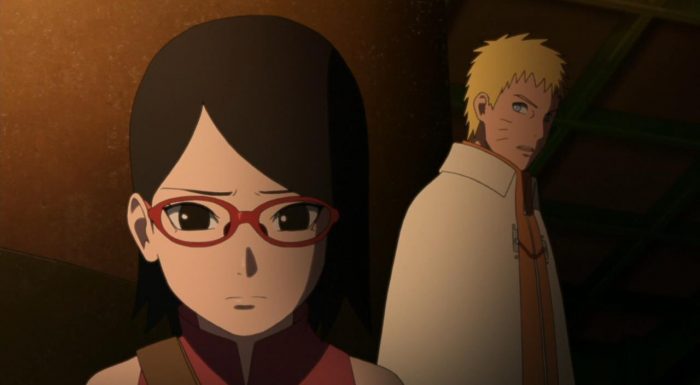 This Naruto Gaiden story arc is turning out to be a lot better than I thought it would. A big part of that, I think, is that this latest story arc, despite being in the Boruto series, feels much more like a classic Naruto story. The big thing here is that the story arc this time revolves around something that both Kishimoto-sensei and Naruto as a franchise have explored oh so well over the years, and that is very much “family”. 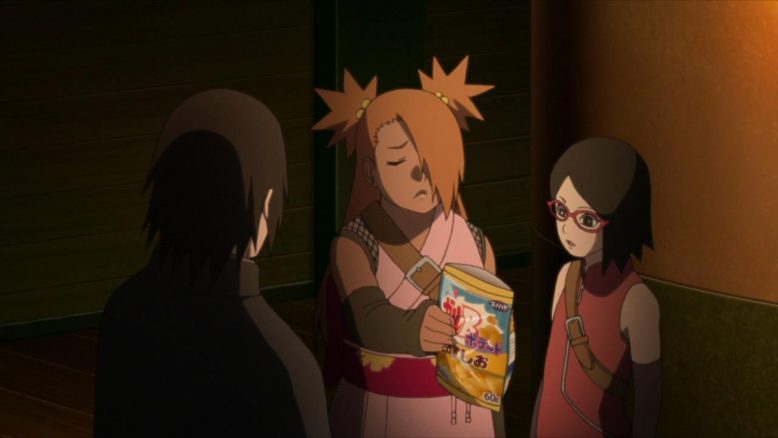 What’s important here, and what makes both this story arc and this episode stand out, is the fact that this isn’t a traditional take on family. Naruto, throughout the years, has more or less focused on the traditional idea of family; two people who were lawfully married and have had children as a result. At first, even the series and franchise’s main protagonist, Naruto, was an orphan, someone who lacked family and didn’t have parents to call his own. That changed of course, and definitely for the better, when the story introduced and expanded upon Naruto’s biological parents.

We’ve seen stories about losing parents, about separation from family, about flat out losing your entire extended family (i.e Sasuke and the Uchiha). What we haven’t seen, is the unique situation where a child ISN’T the child of a lawful union, i.e a child born out of wedlock. So the fact that the series is taking perhaps the most well adjusted and smart of its newer generations characters, i.e Sarada, and flat out ruining her world by some rather shocking reveals this week, is something that is pretty emotionally powerful. 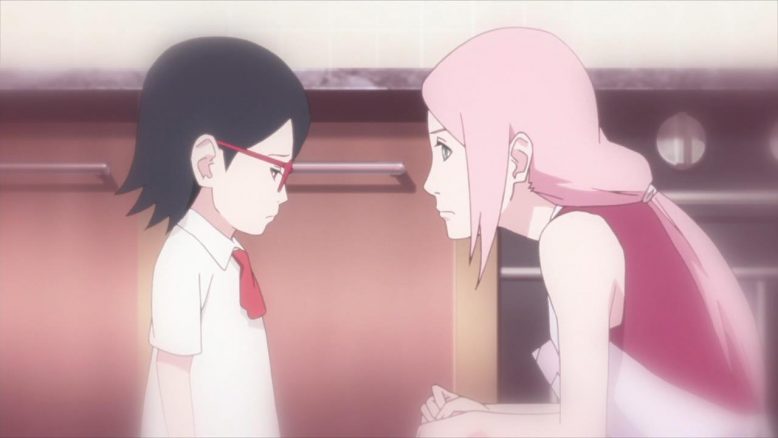 The big title event this week, which is more or less what this week’s episode focuses on, is Sarada’s relationship to her mother, and what exactly it means to be family. With Sakura having been captured by the story arc’s villain Shin last week, Sasuke, Naruto, Sarada and the annoying one are all in search of leads to Sakura’s whereabouts. The search ends up taking them to one of the franchise’s oldest villains, in Orochimaru, and with that, come many of the answers that Sarada has been seeking.

There’s an interesting conversation that runs throughout the episode as we slowly make our way towards the big reveal, and the conversation revolves around genes. Shin it turns out, is one of Orochimaru’s cloning experiments, and thus views parentage as little more than the passing of genetics. Its a very cold, scientific-like view, one that’s held by both Shin and Orochimaru himself in the episode. Naruto of course, has a very different view of family, and its that view, that really shines during the episode’s key moment. 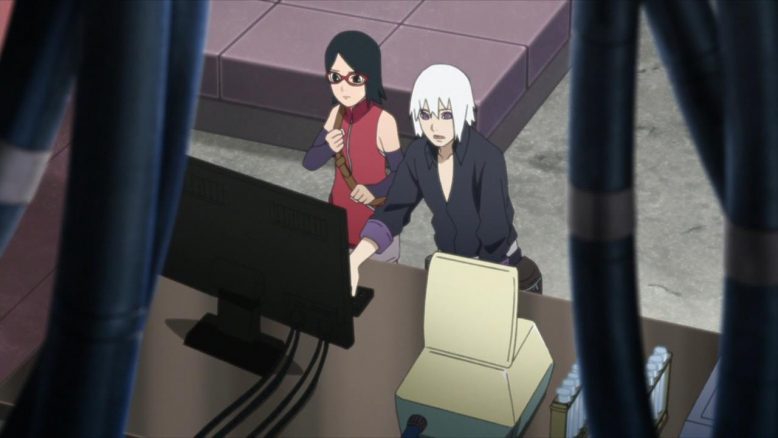 The key moment, the big reveal, is of course, the fact that Sarada is actually Karin’s biological daughter, rather than Sakura. This reveal, as earth shattering as it is, is a really big deal because it introduces such a new dynamic in this series. Naruto as a story, as I’ve mentioned before, has always been about traditional family values, if only because its written by someone who comes from a more reserved culture like that of Japan.

Its a culture and an idea that I relate to a lot actually, but of course, the reality in the world today is very different. There’s a lot of cases like Sarada’s in the world, and its kind of nice to see Naruto/Boruto as a franchise tackle this sort of situation head on. There’s actually a lot of fallout from something like what Sarada learns this week, especially when it comes out in a society where everyone basically has a married mother and father, and the norm is a traditional family rather than anything else. 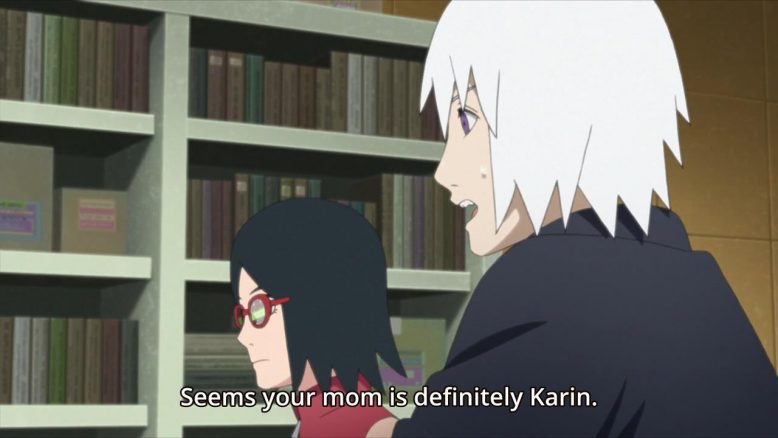 Sarada learning, via DNA test on an Umbical chord taken from Karin, that Orochimaru just happens to have (which incidentally is creepy as heck), that Sakura is not her real mother, is something that I’d say breaks the girl down in a way that nothing else could. See, its one thing to be a child born out of wedlock in a society where that’s practically unheard of, its another thing entirely to be lied to for the majority of your life by the person you’d call mother.

Sakura has always treated Sarada as her own child, she’s always told her that she IS her own child, and to Sakura’s credit, that’s an amazing thing to do with the child of one of your husband’s flings. The fact that Sakura loves Sarada as much as she does, is not only mature, but its the sort of message that I really wish more fiction would push forward. Regardless of what the husband or the parents have done, the child is not only innocent, but is someone to really be treasured. Every child deserves to feel special, to be taken care of, and to more than anything, have a loving parent. 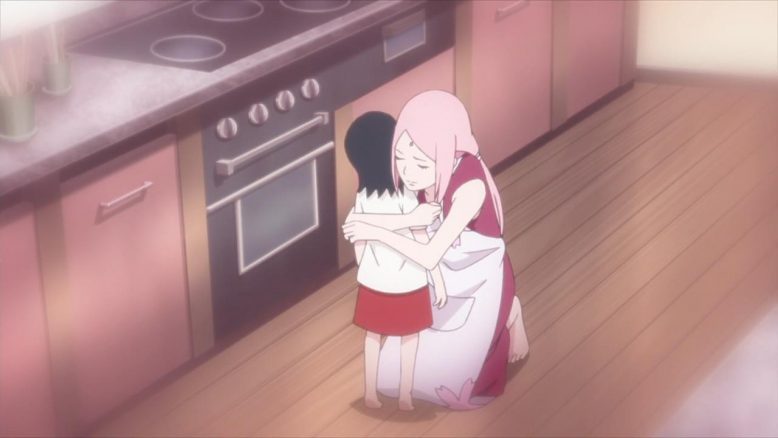 The fact of the matter is that Sakura was put in a pretty darn difficult position, and all things considered, she did pretty well I’d say. Raising someone else’s daughter as your own, is something only one of the title characters of the franchise could do.

Of course, as much as I give props to Sakura for how she’s taken care of Sarada thus far, its worth noting, that doesn’t lessen any of the pain that Sarada is crushed by, the minute she finds out the truth. Here’s the thing, every child, when they have a fight with their parent, pulls out the “maybe I’m adopted” or “maybe I’m not really their child” card and idea. Its something that just happens, its natural, and its something that perhaps every child is guilty of flinging at their parents. 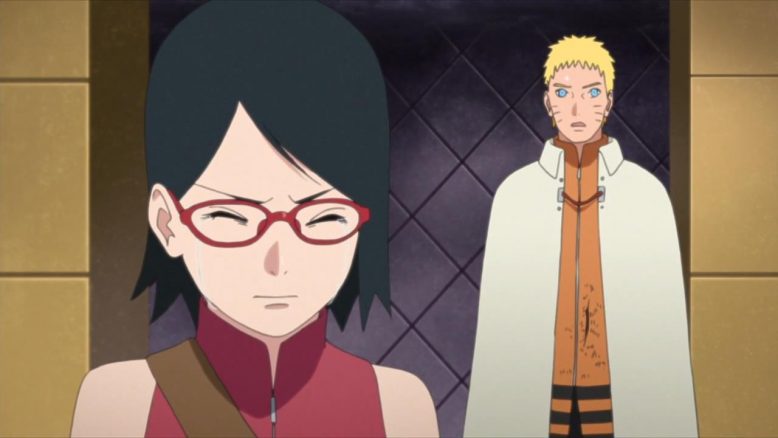 Any parent will tell you, that’s probably one of the most hurtful things a child can say to them, because more often than not, it just isn’t true. The big question this week, that Boruto/Naruto ask though, is what if that paritcular notion as true? Well… I’d say I can’t even begin to imagine the sort of pain Sarada is in right now. Despite her quest for the truth, I know that what Sarada was really hoping for, was for her suspicions to be proven false. She wanted to be told, somehow, that she had been acting badly and that everything was still okay.

Events this week prove that things are very much not okay. Sarada learns the truth about her parentage, and with it, she realizes that her dynamic with her mother is forever changed. She’s also hurt beyond measure, as this amount of reality changing information is a lot for a prepubescent girl to take in. 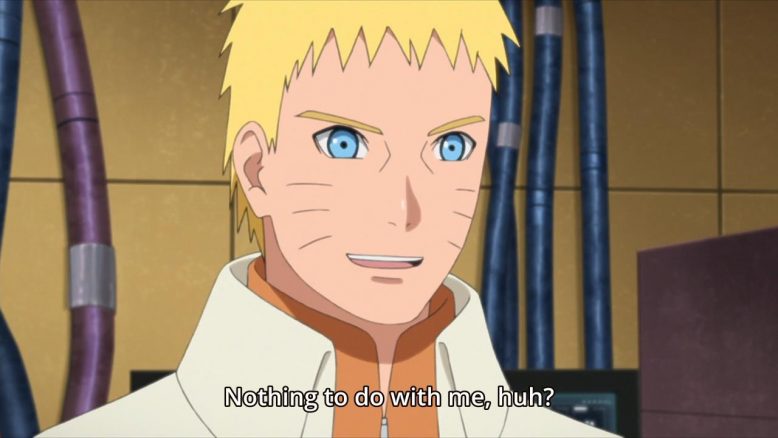 Thank God for Naruto though, who not only overhears Sarada’s big discovery, but steps right in to comfort her and take care of the situation. Here’s the thing, Naruto has always been a character that’s been great at empathizing with other people. He has this gift, this ability, to really care for the people that he’s around, and help them through their emotional issues. We saw that multiple times in the series, first with Gaara, then Pain, and eventually even Sasuke. Naruto is great at understanding people’s pain and helping them get through what are truly emotionally trying times.

We’ve seen Naruto help people before, but the way he guides Sarada through her pain, is on another level. Its really something else, to see what Naruto, the adult, the leader of his entire comunity, is able to do for a child that is suffering from her entire family’s darkest secrets coming out and threatening to destroy her. 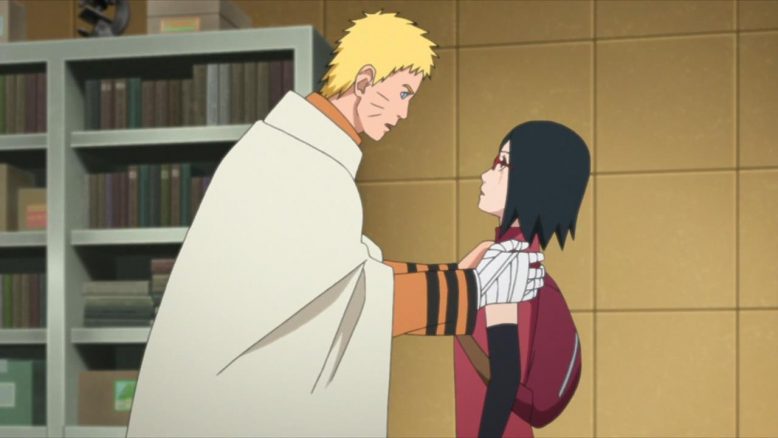 Its Naruto, that helps Sarada sort her feelings and puts the important things in perspective. Biology aside, I truly believe that Naruto makes the most salient point of the entire series, in that he mentions that family has little to do with blood. What’s important is the feelings people have from one another, and how they treat one another. For all intents and purposes, Sakura IS Sarada’s mother. She’s raised her, taken care of her, and is very much her mother, all biological facts be damned.

And what’s so beautiful about this all, is that in that scene, where Naruto slowly explains things to Sarada, it turns out that those words, are just the words that Sarada wants and needs to hear. Its so telling, that the scared girl mentions “but its all going to be different”, and Naruto smiles and reassures her that the bond she has with her mother, is a lot stronger than any of this. The relief, the sense of clarity that Sarada gets as realizes that she still loves her mother despite all of this, is just, heartwarming to see. 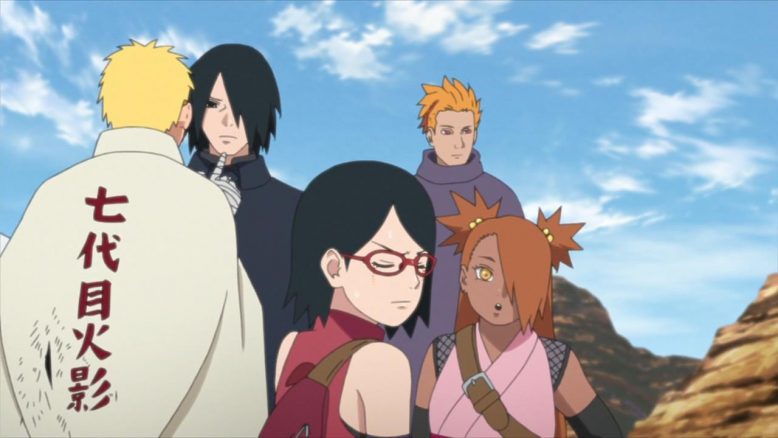 I’ve ragged a lot on Naruto in this series, and I’ve often mentioned that he’s just not the kind of parent that I’d say is a good one. I think a lot of that has to do with who is actually writing him. The Naruto Gaiden arc is an arc by Kishimoto, and its quite clear that its Kishimoto, that really understands and respects his own creation. The Naruto here is the Naruto I think I’ve wanted to see, the one that knows what’s really important, and who prioritizes the well being of those important to him, over everything else.

By the end of the episode, we have some really interesting things setup for what will be the final episode of this story, next week. We know now that Sarada is very much Karin’s child, but we also know that as far as she’s concerned, she’s Sakura’s daughter. With Sasuke, Naruto and Sarada now heading to save Sakura, it’ll be interesting to see how this story resolves. How will Sakura deal with the news that Sarada now knows about her parentage? How is Sasuke going to answer to the fact that he not only cheated on Sakura, but actually dumped his illegitimate daughter on her, and left to go “atone” for his past crimes. 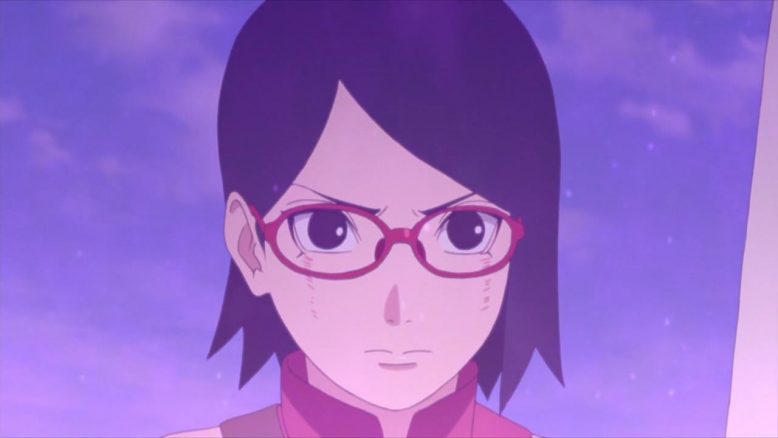 Its interesting stuff, and a part of me is kind of sad that this arc, is perhaps the last real taste of the traditional Kishimoto-sensei Naruto storytelling, that we’ll ever get in this series. Savor it while it lasts, I guess.