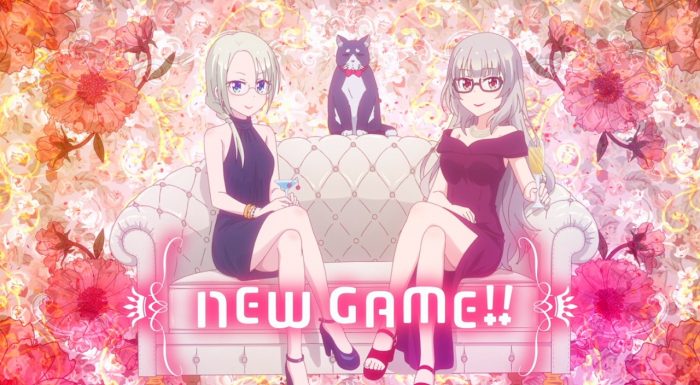 So, at long last Nene’s journey as a programmer has brought her back into the fold at Eagle Jump. For anime-only viewers it may not seem like it’s been that long, having seen her working her way towards it from week to week during this season, but manga readers had a much different experience. For us, the chapter where we first learned that she had taken up programming, back when she first showed Nene Quest to Umiko, was translated back in May of last year: a good two months before the first season of the anime started airing. The releases then went through many intermittent hiatuses due to internal issues among the scanlators, and as a result the chapter with Nene interviewing at Eagle Jump was translated barely four weeks ago. It’s been well over a year for us of wondering if she was really going to leverage these skills to return to Eagle Jump, or if in the process she would find a dream of her own and strike out in her own direction. 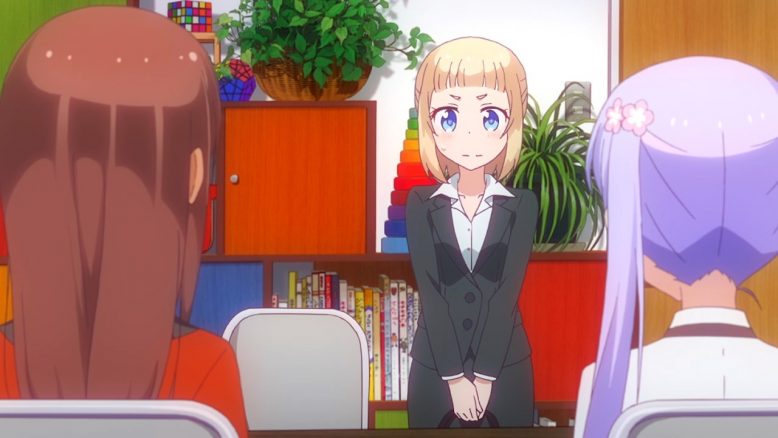 Still, seeing her here is heartwarming, and simultaneously amusing as Umiko takes the opportunity to mess with her. Of course, Aoba’s presence in that interview isn’t just for sadistic fun: it’s a genuine test to see how well Nene has improved. When she first started at Eagle Jump she was hyperactive: unable to stay in her seat and constantly rushing over to distract Aoba and the rest of the character team. All of who liked her, make no mistake, but she wasn’t getting her job done. Umiko basically need to ride herd on her in order to keep her focused on her job. The only reason Nene kept that job is because when she did buckle down and work her she proved herself to be very very good at it. Umiko knows all this, and she knows that Nene went from being unable to program so much as “hello world” to creating her own fully playable game without relying on an engine in the space of just sixth months. She shows a tremendous capacity to learn, if she is able to stay focused. And so Umiko presents her with Aoba right away, to see just how well Nene can really focus under these circumstances. 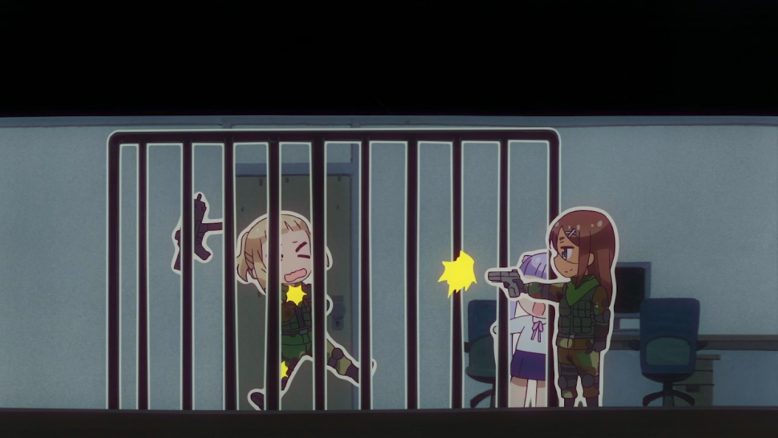 Fortunately, Nene has matured since her early days as a tester back in season one, and she doesn’t fall for the tricks Umiko sets for her. Her answers to Aoba’s questions are honest and heartfelt, and reveal a girl who has been genuinely moved to work at this company, and who doesn’t rely on canned standard interview answers to try to weasel her way through questions. She convinces them that she has the heart and the maturity to work there. All she currently lacks is the skill, and given how quickly she has shown herself to be able to learn thus far, Umiko has high expectations that Nene will be able to pick that up quickly. Seeing Nene moved to tears at hearing this is very touching. Before she first came to work at Eagle Jump back in season 1, she’d mostly just coasted through life, doing whatever was easiest, never really having a goal in mind. As a result, no one ever really held any great expectations for her. Now, someone Nene greatly respects is telling her that she has great expectations for Nene. The shock of hearing that for the first time in her life brings Nene to tears. 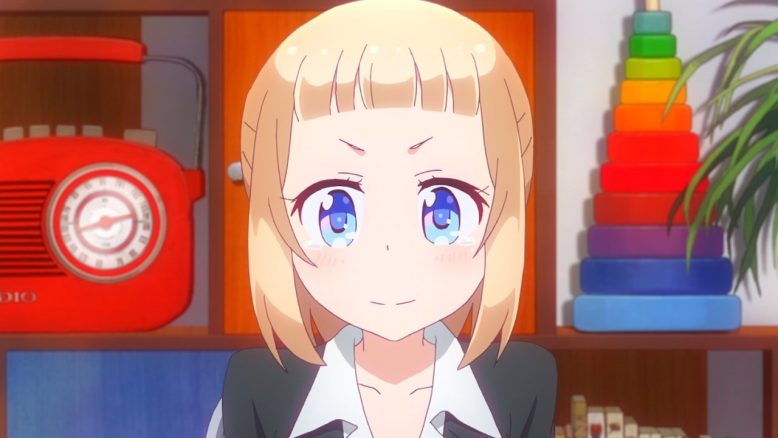 Nene’s quick stop by Aoba’s desk on the way out deserves a mention. Of course Aoba, and the rest of the crew who became her friends when she was in before all deserve to know that she’s gotten the job. But it’s her reaction to the Peco drawings that really matters here. Aoba still feels pain from what happened with the key visuals. Honestly it would be hard to imagine it going any other way. But in Nene’s eyes it doesn’t matter that Ko got to draw the promo art for Peco. What matters is that her friend managed something nigh-impossible, achieving her dream in becoming one of the youngest lead character designers on record. Aoba has accomplished something incredible, and no corporate politics are going to be able to take that fact away from her. 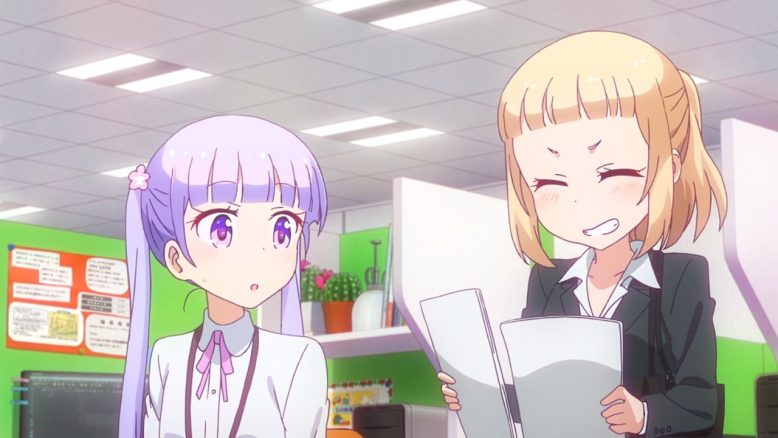 Cut to Christina and Shizuku, and we learn that poor Christina is no happier about the whole key visual situation than anyone else. She’s basically little more than a glorified messenger for her bosses, and it’s her job to relay their instructions, even when she finds them personally repugnant. Luckily Shizuku is there to ensure that the character team doesn’t take her actions personally. We also learn, surprisingly, that she can’t stand being touched, or even being too close to people. Which undoubtedly cause all sorts of trouble in France where the greeting is supposedly a kiss. 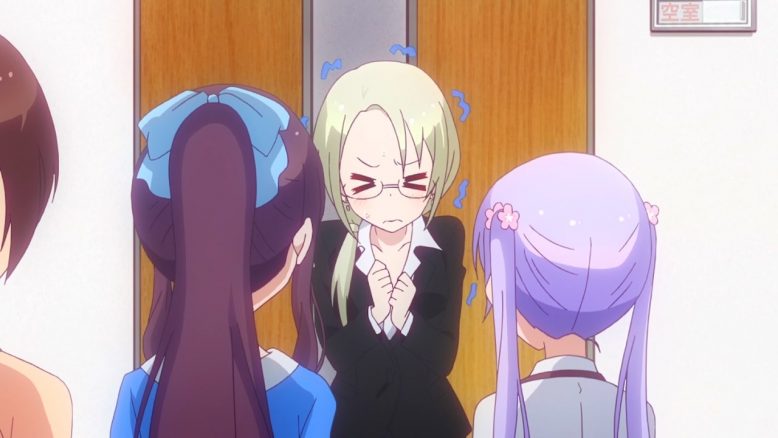 Finally we get to meet the two newest additions to Eagle Jump (aside from Nene): Narumi (Naru) Tsubame and Mochizuki (Momo) Momiji. Two very different personalities, to the point that it’s hard to imagine them being friends, beyond the old idiom “opposites attract.” Naru is cheerful, fun-loving, outgoing, enjoys playing pranks, and talks like someone pumped on caffeine. While Momo is quiet, socially awkward speaks slowly and uncertainly as if struggling to get out every word, and clearly has no idea how to relate to the people she’s finding herself dealing with. She’s not exactly shy in the same sense as Hifumi has been shy, but there are some definite similarities in their personalities that make me think the two of them could be good for each other. 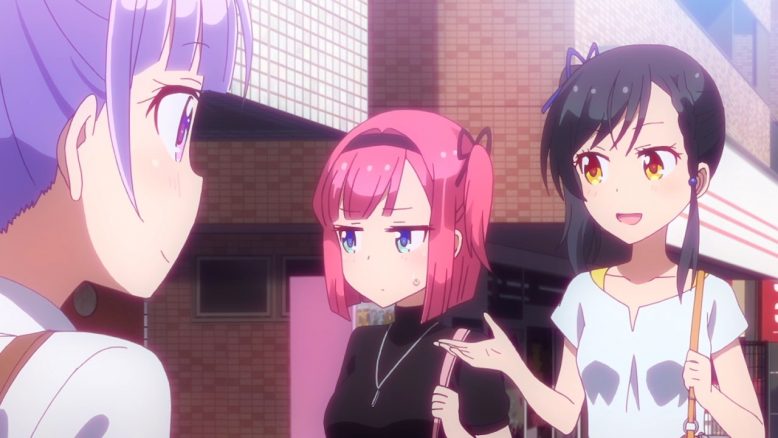 This was a good episode, with lots of different stuff to look at. I really only scratched the surface here, but I hope I at least touched on the highlights. I’m really looking forward to future episodes and seeing how well our two newbies integrate in the company. We’re poking our noses out into unknown territory for me, and it’s looking to be very interesting indeed. 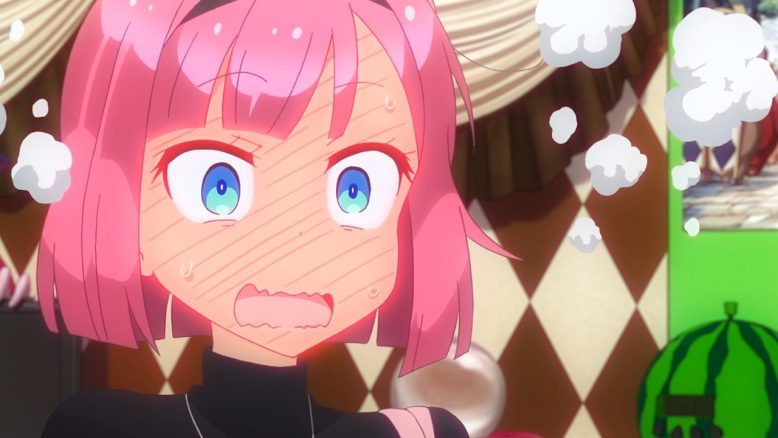 Momo may be taciturn and have trouble figuring out how to get along with people, but she’s genuinely adorable.