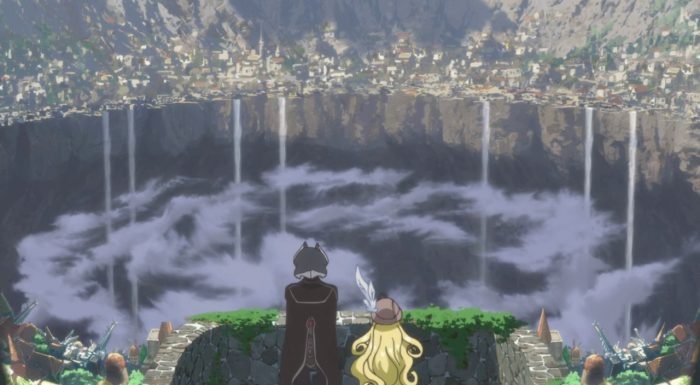 Who would have thought of the idea of surviving on hippo meat for five days in a wilderness survival setting? If it were me I would have done all I could to avoid that thing. I guess that is one plus to being as resilient as Reg is – he was bitten and shaken repeatedly by that creature (for the record it is called an Ottobasu) and tossed through the air and … no problems. Even so, I would probably have looked equally exhausted after so many days of eating … that. It really was a plus that not only were there no predatory beasts about (at least that we were shown), but also that there happened to be both a fresh water pond nearby AND Riko knew that those particular firefly/water strider Abyssal insects only skated around on potable water. 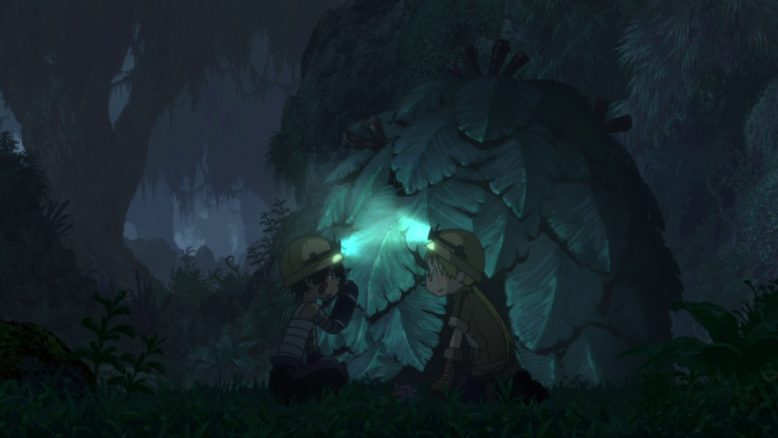 As interesting as it was to watch Riko and Reg in their survivalist training (and as much as I cheered them on), the flashback content of the episode as a whole was far more interesting for me. We finally got to see Lyza again, but we also got to see Torka – Riko’s father, who unfortunately seemed to have died shortly after Riko was conceived (I hope he was not eaten by something dreadful or something like that). What’s more, we finally get to see Lyza’s face for a change, and when coupled with the summary “Leader” gave of her personality back in episode two (like being known as “the Annihilator” because of how she consistently ruthlessly literally slaughtered the other Abyss Delvers from other countries they ran into down there) it makes for … quite an overall picture. XD 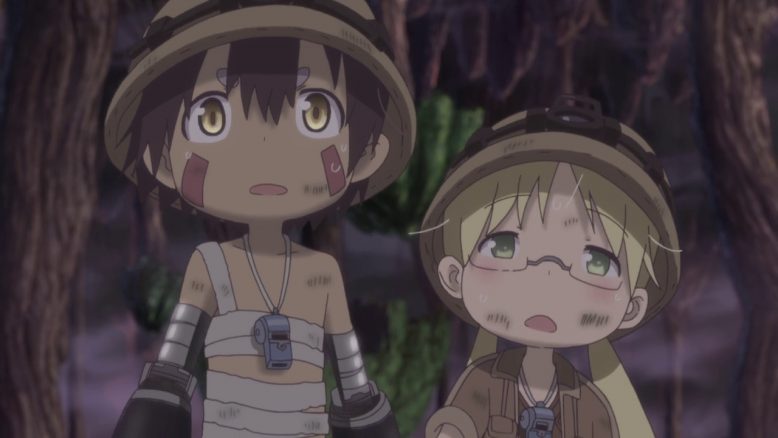 What was also interesting was Ozen going into more details about the White Whistles she knows for sure that were alive and (presumably) still making their way about in the Fifth layer … she even mentioned them by name and the anime gave us visuals: Wakuna the Chosen, the Sovereign of Guidance; Srajo the Mysterious, the Sovereign of Mystery (who seems to be wearing a creepy mask of something like that that looks like a crane’s beak or something) and Bondrewd the Novel, the Sovereign of Dawn. What’s more, according to Ozen, who considers herself to be “nice”, she warns Rize and Reg to be very careful around the other Whistles and try to spend as little time as possible on the Fifth Layer, but especially to be wary of Bondrewd, who she says is an “out and out scoundrel”…. Uwah. -_- 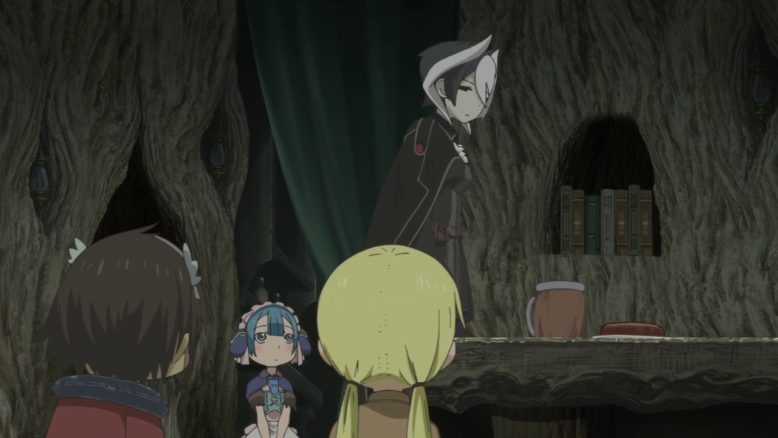 One of the more interesting aspects that was also passed along in the episode was the “unwritten oral tradition” that is apparently passed between and by the White Whistles amongst themselves about the final dives of the White Whistles themselves of the past generations. Very interesting things, like how the timbre of the actual whistles the White Whistles carry activates certain of the relics of the Abyss (as an example for those who remember the Box Ozen used to carry Riko’s body to the surface was “opened” by blowing Lyza’s whistle), the “Mysterious Ring” of the Seventh Layer and a “cryptic device” used for traversing the Fifth Layer’s “Sea”. Those at least are the one’s mentioned in the anime proper. I seriously wish that we could have heard more of these things…. 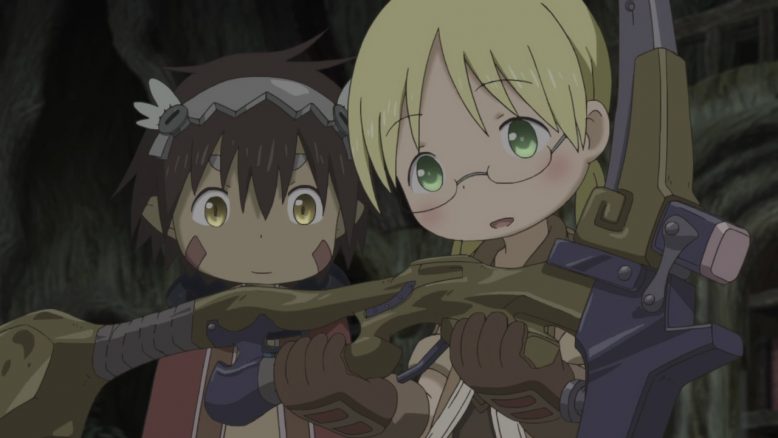 After receiving her mother’s former weapon – a pickaxe known as “Blaze Reap” and instructed by Ozen Leg and Riko make their way to the edge of the Third Layer of the Abyss (known as the “Great Fault”) and bid a fond farewell to the Abyssal Bandits that work for Ozen in the Seeker Camp as well a tearful farewell from Marulk, who has really come to be fond of them. It turns out that Lyza intuitively knew that Riko would make her way down into the Abyss in pursuit of her, and made request of her mentor to help Riko out should they cross paths. And I must admit, that in retrospect Ozen, for all her rotten personality and the like, actually really came through for Reg and Riko. After all is said and done it really does seem to me that Ozen really adored (adores?) Lyza … err … in her distinctly Ozen-like manner, I think. XD 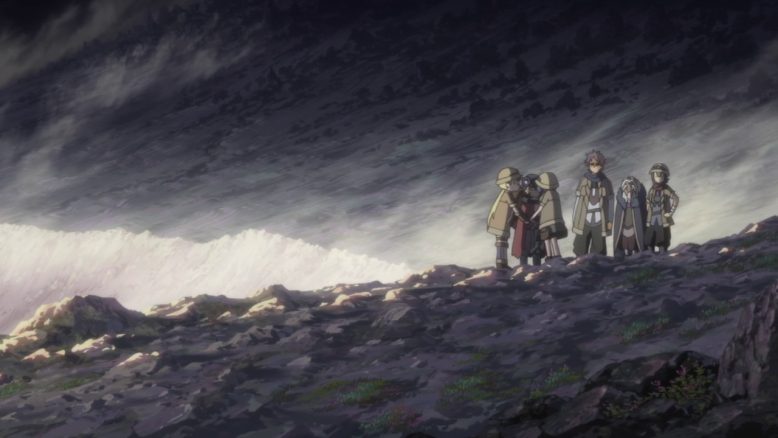 I have been thinking quite a bit of late about the pace of the anime itself as well as the chapters of the source manga that have been published already. At the moment it seems the series is adopting a pace similar to what I have seen in previous split cour series. The footage, characters and locations shown in the OP and ED show up to a certain point, but that point is quite a distance from where the series in the anime is at present – as of this episode we are roughly at chapter 17 out of 42 and just finished episode 8. So yes … there is an outside possibility that a split cour (or even a roll over straight into a second season) may be coming our way. But whether or no another cour is announced soon (please let it be so!) next episode will take Riko and Reg into the third layer of the Abyss … and … well … no spoilers for what they will discover! ^^