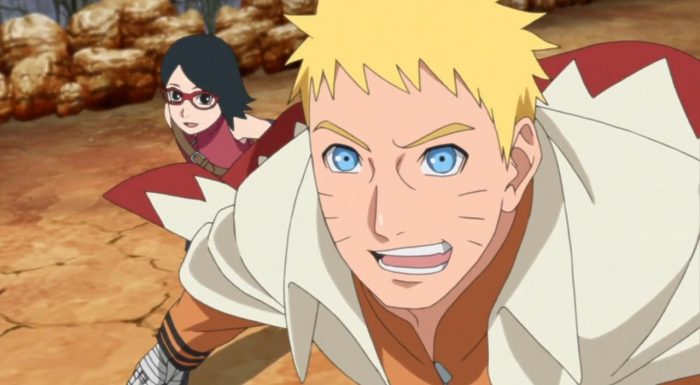 Boruto Naruto Next Generations continues its trek through the rather uneven Naruto Gaiden Story arc. Uneven really is the key descriptor here, because while there’s definitely a lot to like about the latest story arc of the series, especially as its starting to find its groove, there are still just some odd ends that stick out a bit too much. 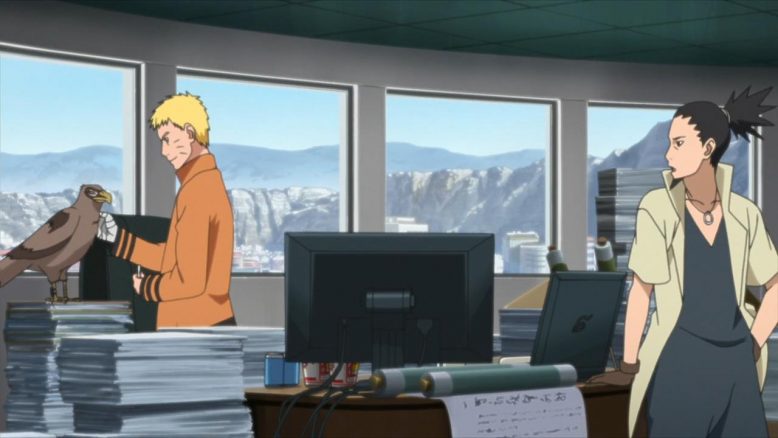 Just a normal day at the office.

Unlike last week, where I really did feel like the tone of the series had shifted into classic Naruto dark, this week brought things back a bit towards the more cheery tone that we’re familiar with in this series. With that cheery tone, however, came a certain amount of absurdity that I’m just not all too much of a fan of. Its a problem we’ve seen in this series a bit too often for comfort, and I wish the writing for the show would just deal with it already.

The issue I’m talking about is with regards to the really hit or miss comedy of the show. This week, and this arc’s whipping girl is none other than Chocho. Chocho’s always been a bit of a dumb character, someone who just a bit socially inept and the show uses that to create some dumb comedy. The problem is, Chocho’s entirely stupid commentary and her “quest” to find her dad, actively brings me (at least) really out of the experience. 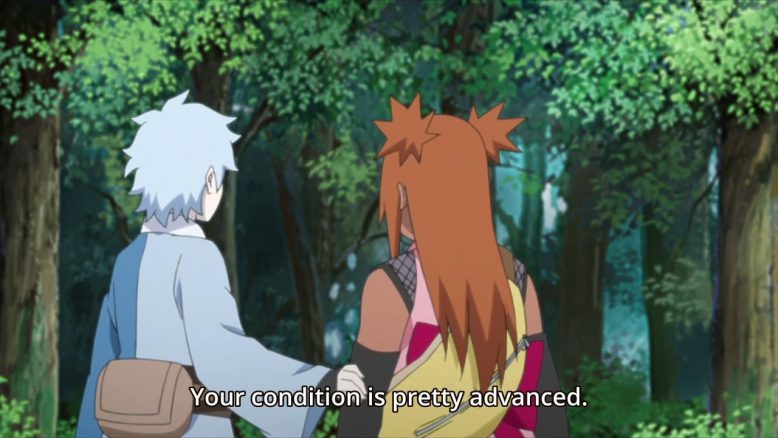 Mitsuki coming right in with the best BURN of the episode! XD

Yes, I get its funny that Chocho is so self absorbed that she doesn’t realize that her “Ikemen Macho” father that she’s searching for, is none other than her dad himself (who lest we all forget, can actually control his body shape). The fact that she keeps mentioning it every chance she gets, is just flat out annoying however, and her constant belief that everyone is secretly into her isn’t all that great either. Much like Shino before her, Chocho just feels horribly out of place, and her silliness actively detracts from an otherwise pretty decent story.

The focus of the story is very much Sarada, and her father Sasuke. I will say that while I’m generally enjoying the story, namely Sarada’s quest to get to actually meet her father, what I’m not too keen on is the arrival of some unknown survivors of the Uchiha clan. Naruto (the story and series) made such a big deal about Sasuke and Itachi being the last Uchiha members, and now we’re actively getting some villains that kind of negate that. What’s worse is that however this new albino kid is, he has not only the sharingan, but the Mangekyo version of it (which if you’ve followed Naruto as a series, is a friggin difficult to get version). 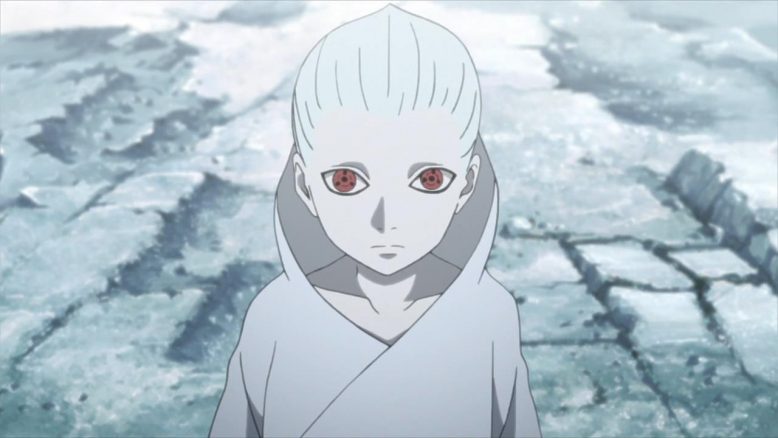 Its a cheap tactic to provide Sasuke and Naruto with some kind of villain that will actually give both of them a challenge, since they’re so overpowered at this point. I get the idea, but I think there needed to be something like what we saw in the Last Naruto Movie, or even Boruto, with some decent build up, to actually make this work.

But enough about the bad stuff, lets talk about the things that this episode actually did REALLY well. I have to say, every scene with Sarada in it this week, was a joy to behold and experience. First we had her interaction with Boruto, which really showed just how different the two were, and just how much Sarada really appreciated the things that Boruto takes for granted. I also liked how Sarada was able to convince Boruto in the end to let her deliver the lunch box to his father. It was just another hint of the good things to come, and the eventual dynamic where Sarada is going to be vying for Hokage, while Boruto will be looking to support her in a way similar to how Sasuke supports Naruto now. 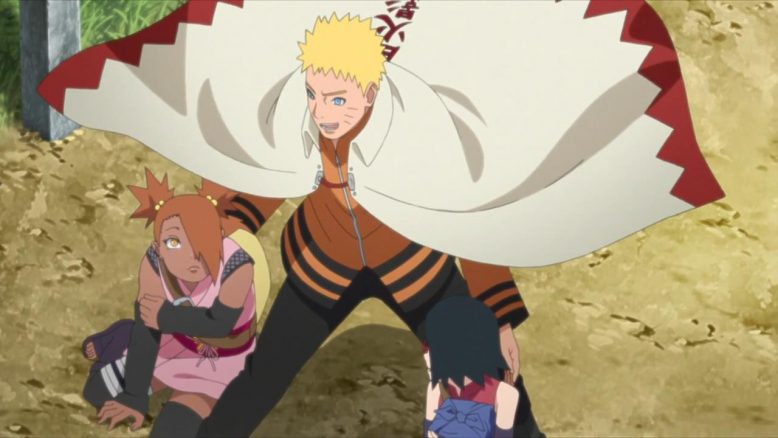 Uncle Naruto is here to save the day!

Speaking of Naruto, I have to say, this week did the best job yet of showing us how cool of a dude he’s actually become. We’ve seen Naruto from the lens of Boruto’s prespective thus far, and the image we’ve gotten, has been less than flattering. Man how the image changed this week, as we saw Sarada actively enjoying and being inspired by just being around the seventh Hokage. To Naruto’s credit, man is he good at dealing with kids, with inspiring them, connecting with them and guiding them. It makes sense that Naruto is very much the leader of Konoha, because he really does seem to know everyone in the village to the degree of being like family.

Naruto talking about Sasuke, and seeing a bit of his own childhood in Sarada, was a pretty sweet moment, and portrayed here. My favorite moment was Naruto talking about his and Sasuke’s academy days, and the whole “like me” part of every sentence was pretty fun and well done. That’s how you do comedy, funny, restrained and in character, and I think the part about Naruto trying to “cover” his older failures and trying to equate them to Sasuke, was the right level of chuckle worthy stuff. 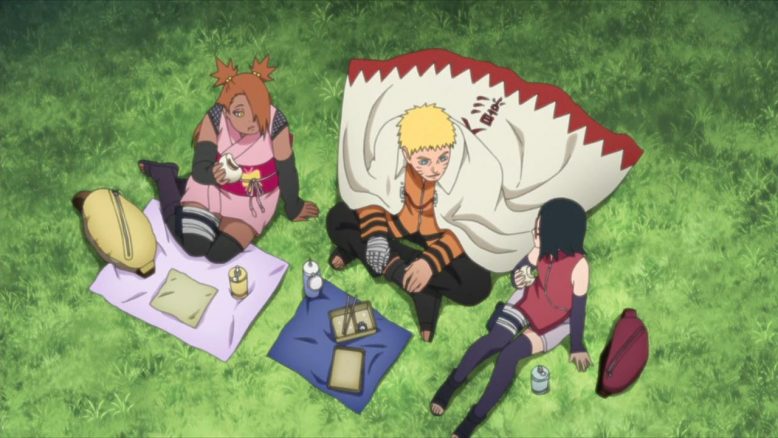 Back in the day, Sasuke and I were totally Equal – Dattebayo!”

Not just the way Naruto talked, but the fact that he actively made sure he wasn’t over burdening the two girls that he had with him, was pretty nice to see. And throughout the whole journey, you could see Sarada’s emotion,  her excitement, her anticipation, as she was getting ever closer to finally meeting her dad. To think that the swell of emotion was so darn powerful in that it actually awoke the Sharingan in her, was a pretty solid moment, and nice twist on the classic power. Until this point, we’ve only ever seen tragedy with regards to the Sharingan, so its just nice to see a more positive spin on the whole awakening of that power.

Of course, as you’d expect, when Chocho ends up slowing everyone down because she’s tired, Sarada ends up heading on ahead anyway. It’s not at all surprising given how eager Sarada’s been, but as she finally does come face to face with Sasuke by the end of the episode, the real tragedy hits. Sasuke not only doesn’t recognize his daughter, but actively prepares to attack her, thinking she’s with the enemy he’s been fighting all this time. 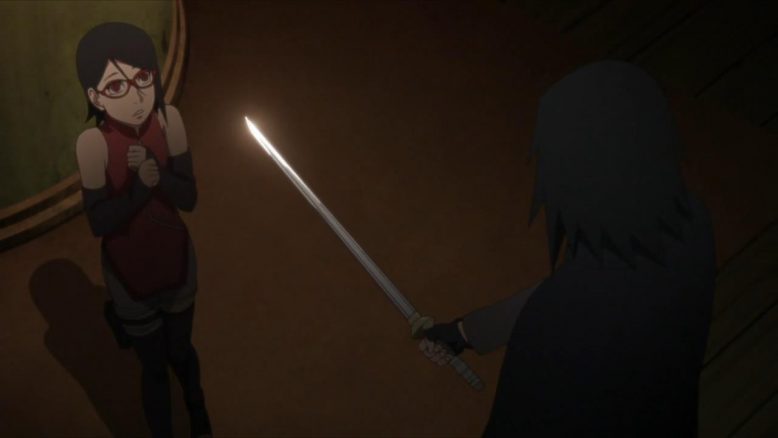 I feel for Sarada, that kind of reunion with her dad is right out of a horror movie!

That really is crushing and earth shattering for a girl that’s been waiting to meet her father. Its also a rather painful moment for the episode to end on, but hey, the good news is that we’re not too far away from the next episode (given how late this post is), so we don’t have to wait too long to see what happens. Personally, this meeting between Sarada and Sasuke is the main driving force behind this arc, and I’m really curious to see how the show handles it. Depending on what we get next week, the rather lackluster start to this arc may very well turn out to be worth it in the end, afterall.