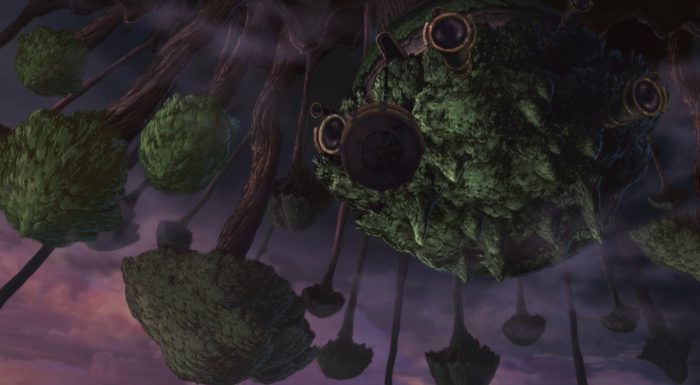 Maybe we should call these two episodes “the arrival of Ozen the Immovable” – because we are not only given a glimpse into what makes her tick, but we are finally given a real good and hard view of the cost involved, or the toll taken on someone who survives the Abyss long enough to become a White Whistle. But it is not just an issue of the toll it exacts on people, it is also an insight into the kind of people who are the ones most likely to survive it’s depths. We already had a brief glimpse of this in earlier episodes when “Leader” (aka Jirou) was describing to Riko the kind of person her mother (aka Lyza the Annihilator) was in episode two, but episode seven really gives us a thorough look into Ozen. And it’s … not a pretty picture. 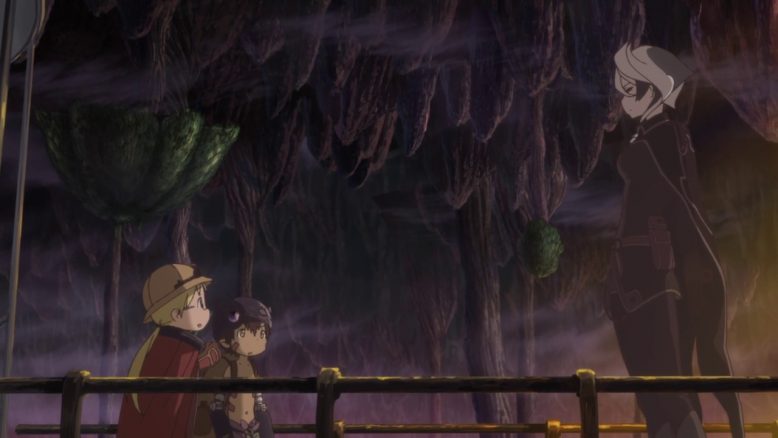 In some ways this was foreshadowed by the beginning of episode seven proper, where the studio gives us some (I assume) anime original content of Habo speaking with the orphanage boys about the White Whistles in general and Ozen in particular: “There are those who absolutely refused to stop pushing forward. On occasion they become one with their personal convictions, transforming into karma itself. These beings, who while human, have also transcended humanity, and continue to watch over everything with the gaze of inhuman eyes.” We will meet other White Whistles in the anime later who totally follow this pattern, but we also see quite clearly in episode seven just why Habo warned Riko and Reg to be very careful around Ozen in episode five…. 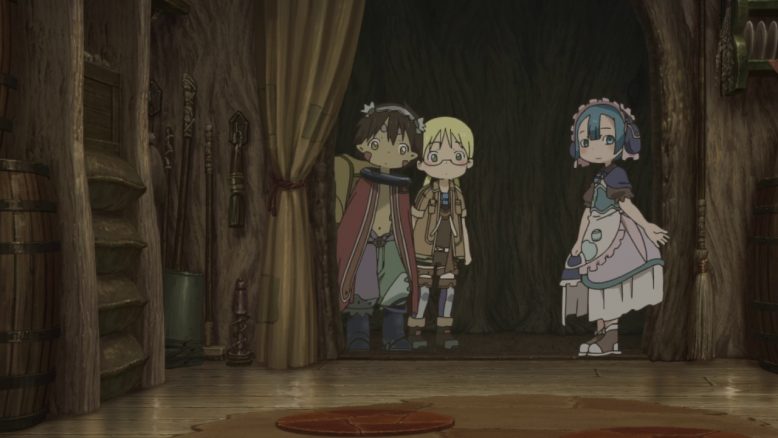 Riko and Reg do successfully make it to the Seeker Camp, but only find Ozen and her current apprentice Marulk (the one who first identified the approach of Riko and Reg via telescope in episode five). Ozen immediately identifies Riko somehow, and permits them to spend the night in the Camp, assigning Marulk to show them around and care for their needs. Incidentally we also discover that Marulk is not Ozen’s only apprentice – Ozen took Lyza under her wing many years ago as well. We later discover in episode seven that there is also a small collection of “Cave Raider bandits” that Ozen has taken in and who do excavations for her in return for food and lodging – since they are wanted criminals there is no way they could make a living in the city, so it is a great deal for them. Ironically these bandits are more “human” in some ways than Ozen is. 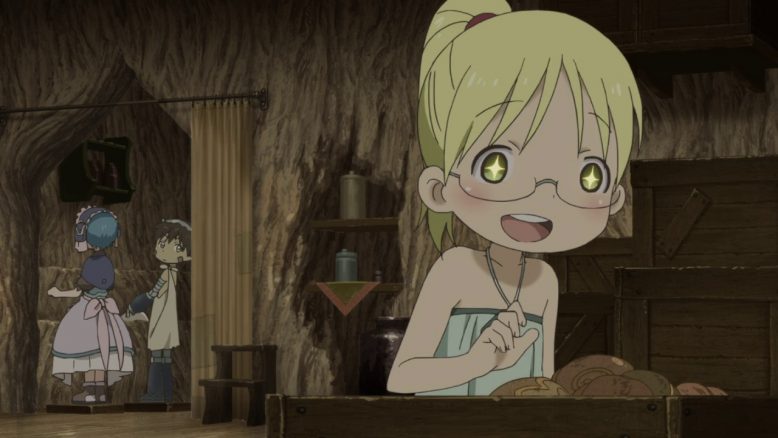 Ozen decides that she is going to scare some sense into the two young delvers during their stay, and by this it is not to necessarily dissuade them from going further, but rather to put them through a sort of “trial by fire” so they can really begin to see what they are getting into if they wish to go deeper into the Abyss. The first thing she does is show Riko the Curse Warder Box – the artifact that Lyza and Ozen used to transfer Riko to the surface after she was born. This is actually rather … creepy, but it also gives us another glimpse into just what sort of a place and what sort of a civilization existed (exists?) in the Abyss itself. Essentially Riko was stillborn, but the box … well … it reanimates corpses in some way. Which means Riko is actually not fully … human, somehow, but rather a sort of half-zombie that can grow and mature physically. 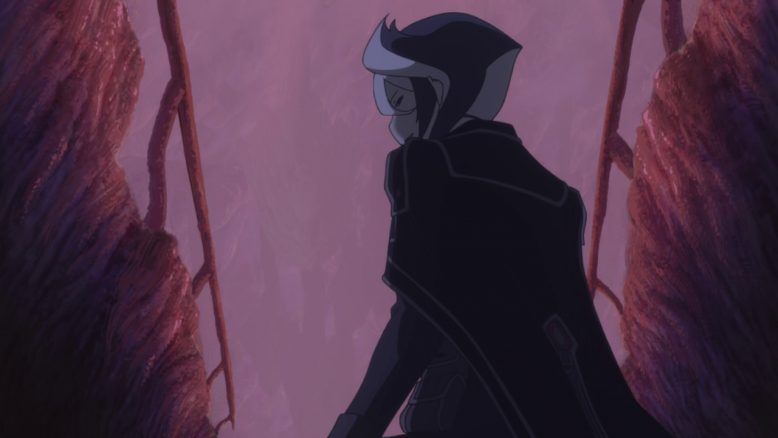 After showing this to Riko, who is understandably shaken to the core of her being, Ozen, in the plainest manner possible, looks Riko dead in the eyes (no pun intended) and frankly states that she hates her. This hurts Riko all the more, but it also angers Reg, who (quite correctly) claims that Ozen is behaving immaturely and demands that she stop. Ozen’s second purpose then kicks in, and she single-handedly manhandles and brutalizes Reg … what’s more, when she sees how indestructible Reg is she sorta “gets into it” and starts going all out on him. Immature indeed, but at the same time it also shows a bit how she is not fully … human, or normal in a way. After the beating is stopped by the Cave Raiding Bandits (whom Marulk tearfully ran to and begged for their help to stop Ozen) Ozen straightforwardly tells Reg and Riko that the lower levels of the Abyss are filled with creatures far stronger, more cunning and deadlier than she is, and that they stand little chance of survival. 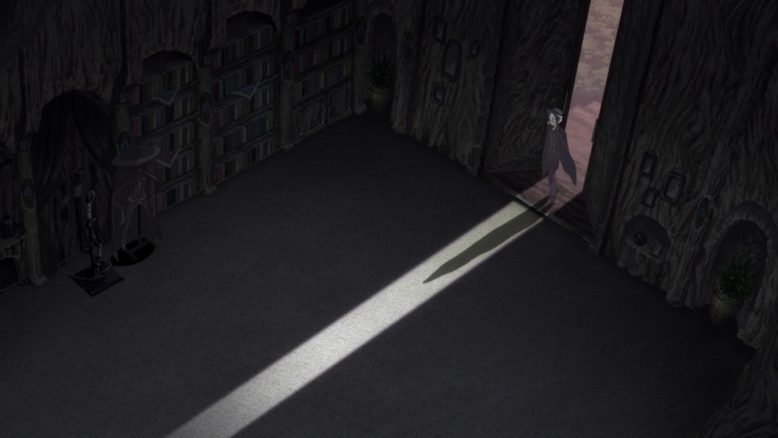 The episode ends with Ozen taking Riko and Reg out to the edge of the Abyss where she instructs them to undergo some harsh survival style training if they want to begin changing so as to be better able to survive the lower levels. In some ways this is a curious act of “kindness” on Ozen’s part, but in another way it is certainly consistent with the twisted personality she has possessed (and apparently cultivated!) over the decades … she is quite old, it seems. Her advice to Reg about using his incinerator is quite “her” as well. 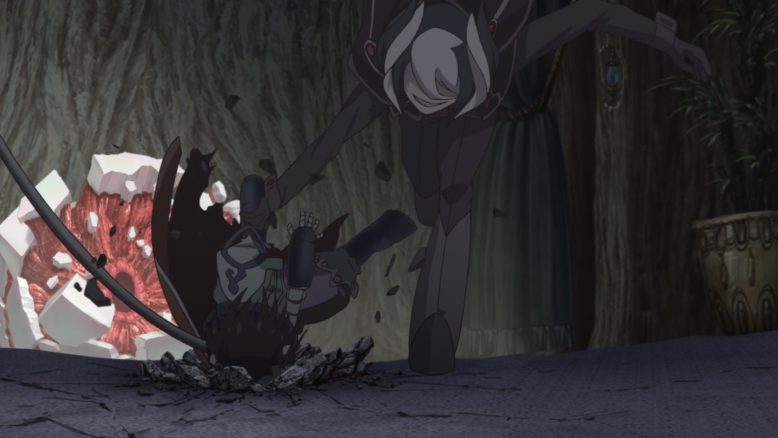 One can only hope that Riko and Reg will learn any knowledge or experience Ozen is able to pass along to them, but we do get a teensy taste of Ozen’s mentoring style when mentioning Reg’s falling unconscious 10 minutes at most after using the beam weapon she says: “…try leaving a defenseless child in the depth and imagine how the child get torn asunder. If you still need to use Incinerator, show no mercy.” Yeesh. -_-