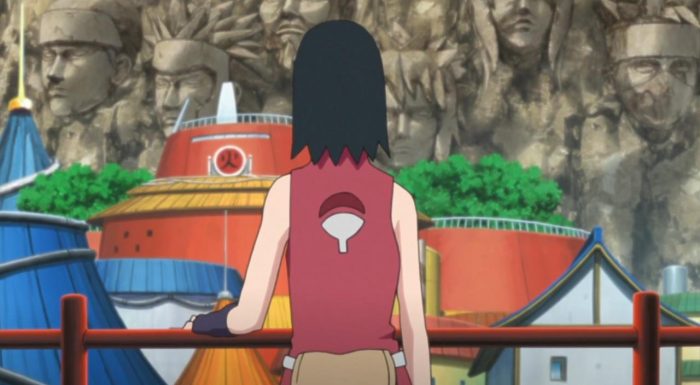 There’s interesting things that happen when multiple writers touch a franchise, and this week’s Boruto episode was one displayed that displayed all those “things”. In Boruto’s case, we’ve got a grand total of three major writers involved in the franchise, each with varying degrees of power and writing style. We’ve got Kishimoto himself, the original creator of Naruto and this entire franchise, we’ve got the manga writer Ukyo Kodachi (who co-wrote the Boruto Movie) and then there’s also Makoto Uezu the writer in charge of series composition. 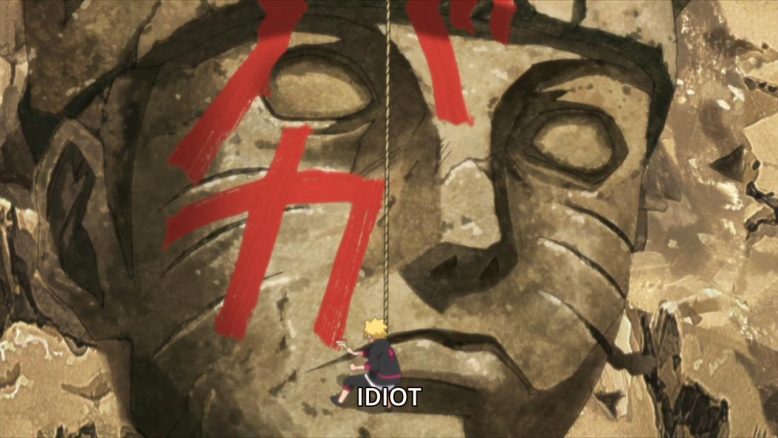 There’s a phrase that instantly comes to mind when you see three different creative visionaries all attached to a franchise, and its called “too many cooks in the kitchen”. That’s been on my mind since Boruto, the anime series started and its one that really rared its ugly head again this week, mere minutes into the episode. But err… I’m getting a bit ahead of myself, so lets talk about what really started this week, the adaptation of the Naruto Gaiden Story arc, something that actually was more of a direct sequel the original Naruto manga, rather than something was written as part of the Boruto manga.

And that really is worth noting, because the story and the characters we experience here, feel a lot more like characters you’d see from Kishimoto rather than either of the other two writers. The biggest change here, is of course, Boruto himself, which going back to the first few minutes of the episode, feels like an entirely different character. See what I’ve often praised about the anime series, and what has made it slightly different than the Boruto movie, is how its portrayed Boruto as a very likable and perhaps better kid than his father. 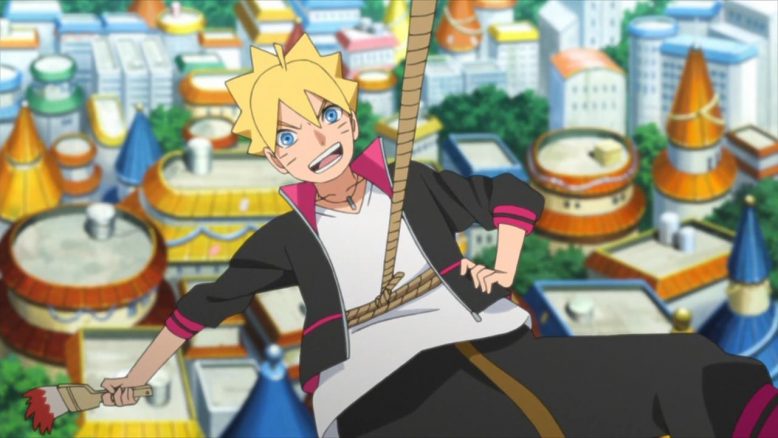 This week’s Boruto, felt very much like someone very different, an annoying brat that just wanted his daddy’s attention and was causing trouble for everyone else, similar to the kind of attention tantrums Naruto threw as a kid. Where the series has taken great pains to show that Naruto may not be the best dad there is, this week’s episode suggested that it was in fact Boruto, that was the problem.

And I can guess what you’re thinking right now, which is more or less “Who cares about Boruto, isn’t this Sarada and Sasuke’s story ?”. To which I suppose I don’t really have too much of a rebuttal, beyond the fact that I think that difference of writing style carries over, not just to Boruto, but to Naruto, Sarada, Sakura and the larger world of Boruto/Naruto as well. The world we see this week, and the characters, feel a bit darker and a bit different as a result. It feels like we’re in a different story, seeing different versions of characters that we’ve grown to really know in the past few months since this series started. 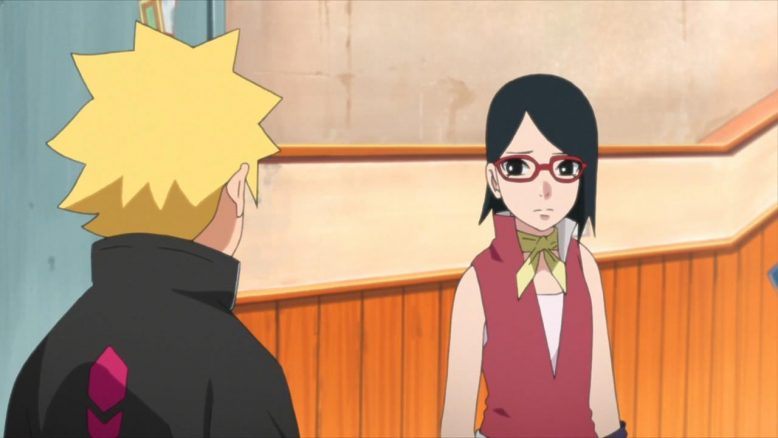 Sarada, who really is the protagonist of this latest story arc, feels like a much gloomier, less adjusted character than the one we’ve seen thus far. The series spent an entire episode showing us how bad of a mother Sakura is and how much Sarada has had to grow up to account for that, but this week argues that Sarada is really just a broken child that’s been kept in the dark.

See, most of the episode is Sarada basically asking questions about her father, to all the “responsible” grownups around her, and basically  being given no answers whatsoever, which ends up making no sense. I’m left wondering if there’s something that’s been lost in translation between the three writers, because it all just feels off. 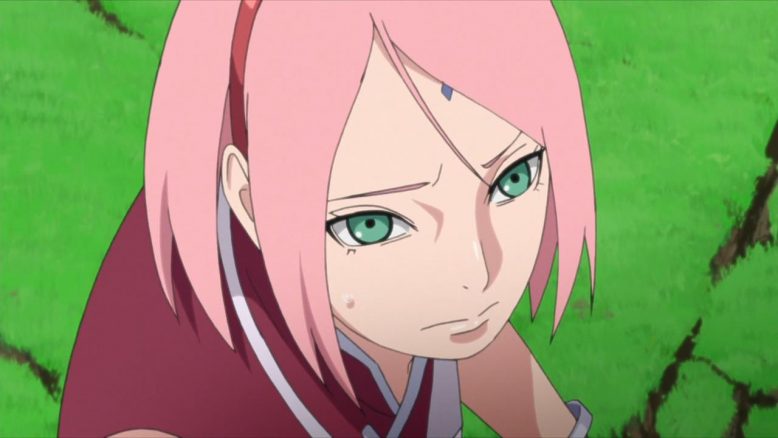 Why has Sakura not told her daughter more about her father? It seems like Sasuke’s checkered past has more or less been kept a secret in Konoha, but the fact that Sarada is so in the dark about everything relating to her family, is just stupid, if nothing else. I hate to say it, but Sarada has a pretty solid point when Sakura responds to her queries in a way that barely shows any familiarity with Sasuke. Sasuke IS her husband, and the father of her child, why the hell does Sakura avoid the very mention of him. Why isn’t she aware of what he’s doing?

You could blame some of it on Sasuke for never checking in, but I’d assume that Naruto would at least let Sakura know what her husband was out doing. On top of that, wouldn’t she want to ask? It seems like Sakura has more or less decided to avoid the issue of family as a whole, and seems to be burying herself in her work. I get wanting to be distracted to cope with a difficult situation, but there’s a kid that’s being basically screwed out of a childhood because of that. 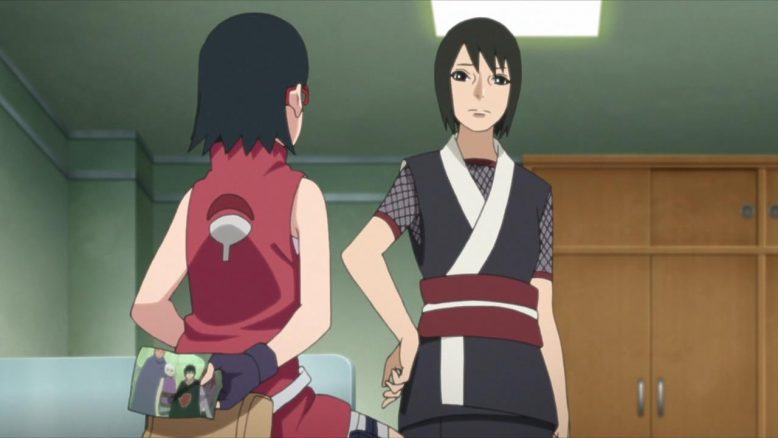 Shizune, who we really see for the first time in this series, actively holds stuff back from Sarada that could’ve just solved the whole issue right there and then. Shizune’s very aware of everything related to Sasuke, Karin and Sakura, and it wouldn’t be bad of her to act like the adult that Sarada needs, and give her some answers. Instead, she too, brushes Sarada off, and instead suggests she go NARUTO instead.

And you know things are kind off when you’re sending a girl confused about her dad, to the dad of the century, Naruto. And my problem with all of this is that this particular setup relies on the idea that everyone in Konoha is shrouded in secrecy, that communication is terrible, and that despite all that Naruto and his friends have accomplished, things haven’t really changed for Konoha as far as the village goes. 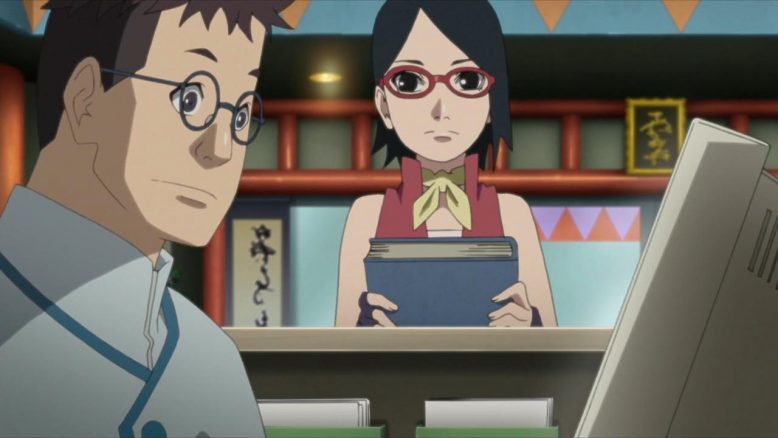 The problem here is that we’ve gotten 18 episodes speaking something completely different that contradicts everything in this week’s episode. That, I think, is what I attribute to the different written styles of the three writers in this case. Kishimoto’s style comes off through and through here, but we’ve gotten stuff that Ukyo and Makoto have been working on that just doesn’t gel all too well with the events of this particular story arc.

And here’s the thing that I guess I buried near the end of this post, the stuff we’re getting here, although rough around the edges, is compelling. There’s a real sense of wonder about Sakura, Sasuke and Sarada. Are they a real family? Is Sarada actually Karin’s child? The whole thing about the glasses would definitely argue for that idea. There’s all these questions, and I love how the series is putting Sakura, Sasuke and Sarada in a really interesting place here. 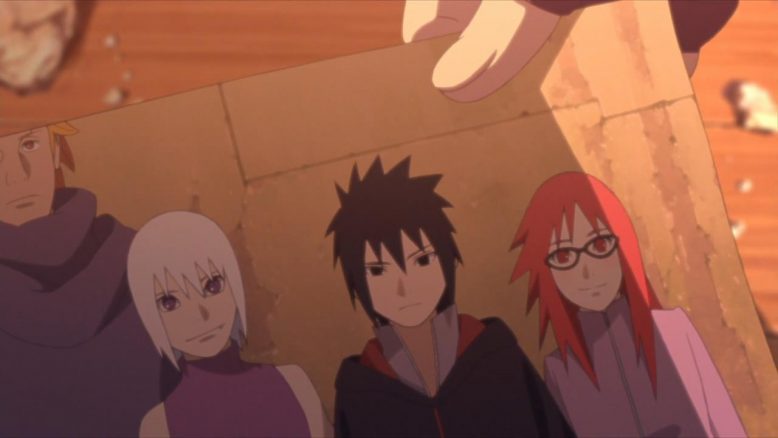 is Sarada the child of Sasuke and Karin? That would explain why Sakura isn’t the best mother she could be. She’s mature and nice enough to take care of Sarada and love her despite whoever her mother is, but I could see a lack of motherly connection because of Sarada’s actual parentage. Of course, if Sarada is Karin’s daughter, then what happened to Karin? Why are Sasuke and Sakura married? These are some pretty dark and harsh questions, and its something we haven’t seen explored in the happy, bright and cheery world of Boruto.

Its good stuff, but it feels horribly out place given that we’re seeing it here. I suppose this episode was going to be a wash even if it had been near perfect. There’s just a sort of transition period, I suppose, as we shift from one writer’s depiction of the world of Naruto and the Shinobi, to another’s. Time will tell if Boruto can shake off this weirdness and just settle into its darker story, or if things will be weird going forward. 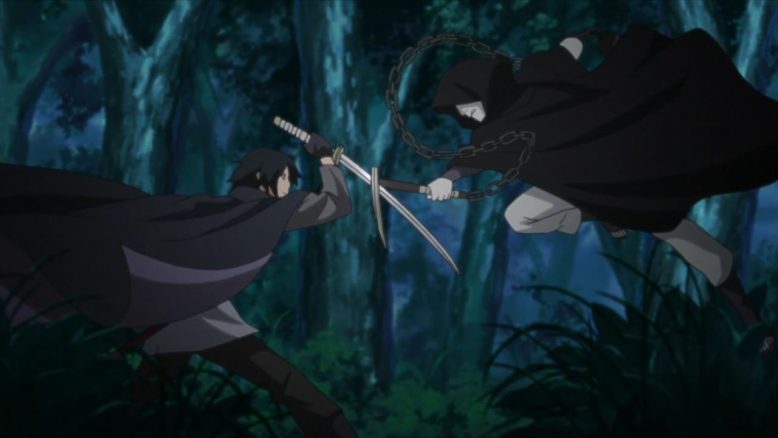 I have no worries about whether this story will be good or not, because I love Kishimoto’s work and style. Whether it fits into the world of Boruto, and whether Makoto and the anime production staff can actually adapt it well? Well, that’s still very much an unknown.