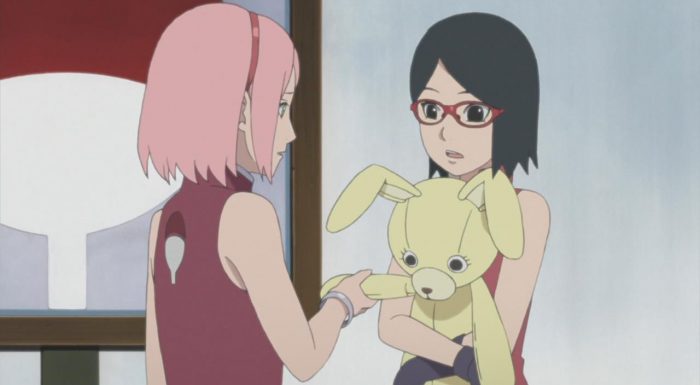 Shinobi families are complicated aren’t they? If there’s one thing that really gets hammered home this week, its that Boruto may actually have a pretty functioning family, especially when compared to someone like Sarada. Long overdue, this week was actually Boruto – Naruto Next Generation’s first real Sarada focused episode. Sarada, a character who’s destined to be pretty important in the grand scheme of things, but until now, has largely been left under developed got some heavy backstory development in this week’s episode. 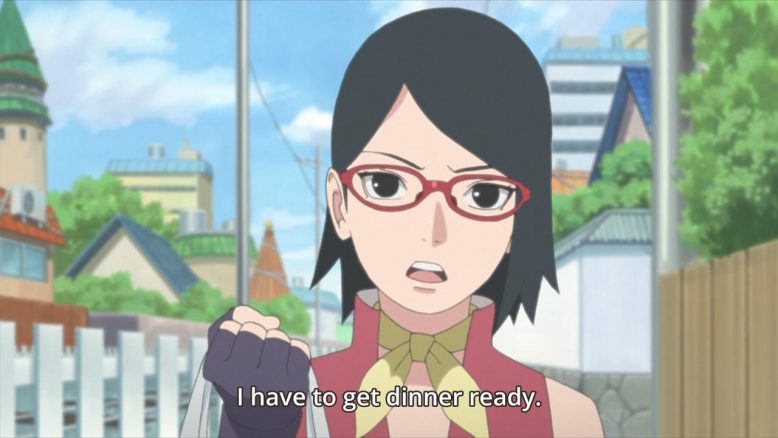 Its worth noting that there were always hints about Sarada’s complicated family situation in the Boruto movie, but I like how this week’s episode really showed the strain that this particular kid has been operating under throughout her life. Sakura is a great doctor and perhaps even a very loving mother, but its pretty clear that there’s some rough around the edges parenting going on behind the scenes. Much like how this series showed that Naruto wasn’t the best of fathers, this week’s episode continued the idea and the trend of past Naruto characters not exactly being the best parents or being solid family people.

And I have to say it again, Sarada definitely has it tougher than Boruto. Both her parents seem like they are flat out ignoring the whole “family” part of their lives, even if the severity does vary. Its pretty much spelled out that Sasuke isn’t and hasn’t ever been around much, but we knew that going into this series. We know that Sarada and Sakura have been mostly left to their own devices, and you’d think that situation would result in Sakura being pretty darn close to her daughter. 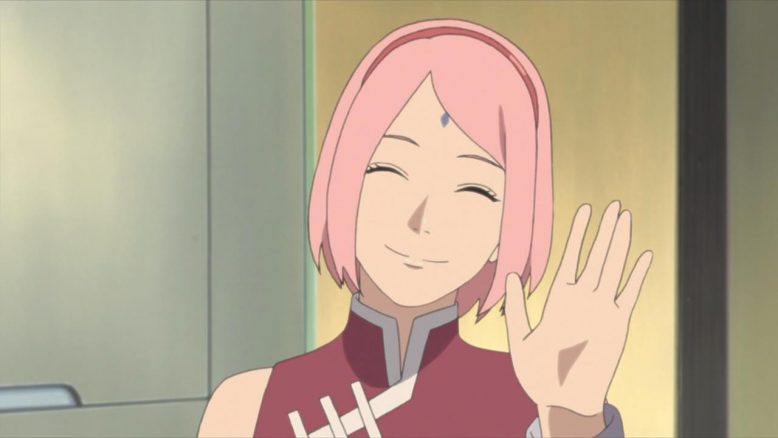 Sakura… Definitely not Mom of the Year….

And it does seem like she is, but it also seems like Sakura’s a real immature parent, and one that’s forced Sarada to grow older much faster than she probably should. Anime shows this kinda of child parent relationship quite often; the one where the child actually takes care of house hold chores like cooking because the parent just isn’t good at it or doesn’t have time. I’m not sure if that’s a situation that occurs frequently in Japan, but I always lament a bit for the child in this equation, no matter how many times I see it.

Truth be told, Sarada shouldn’t have to take care of the house’s chores by herself, while her mother overworks herself, especially at the age that she’s at. But hey, you could argue that Sakura did do a pretty good job of raising her daughter to be independent and capable right? That thought did occur to me too, except… There’s evidence later on in the episode that argues against that particular line of thought. 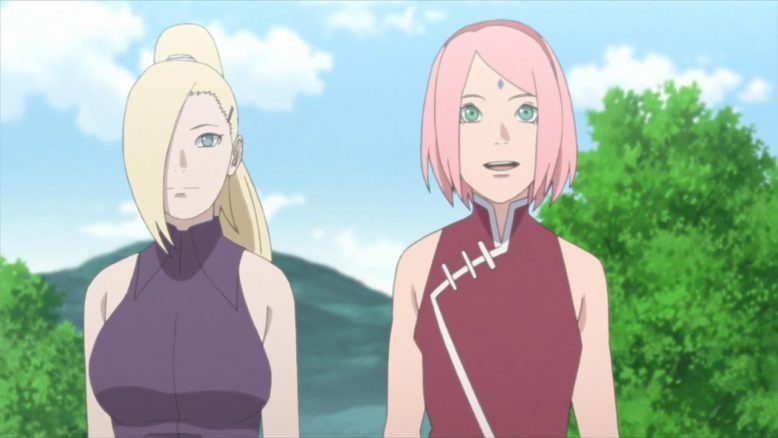 Is this what adults do once they have kids? Take vacations without said kids and get away from it all?

See, a big part of this episode revolves around Sakura leaving for a vacation trip, and giving Sarada a little errand to run for her while she’s away. We’ll get to the errand in a little bit, but the thing that bugged me, was Sakura’s trip itself. Sakura ends up spending a “vacation” with her friend Ino (making her first appearance in this series) while she leaves Sarada at home, which is already kinda odd. What really makes things rather dire for me, however, is the fact that the highlight of the trip is Sakura reminiscing about a two minute date she had with Sasuke, Sarada’s father.

I don’t know about you, but I find that messed up on so many levels. It feels like Sakura should have taken this trip with Sarada, and bonded with her daughter, perhaps telling her ABOUT this so called date, she had with her father. Instead of that, Sakura leaves her daughter to tend to the house, while SHE ends up traveling with an old friend and acting like a giddy school girl, remembering a good time she HAD with her husband, who’s still alive but just not around these days. 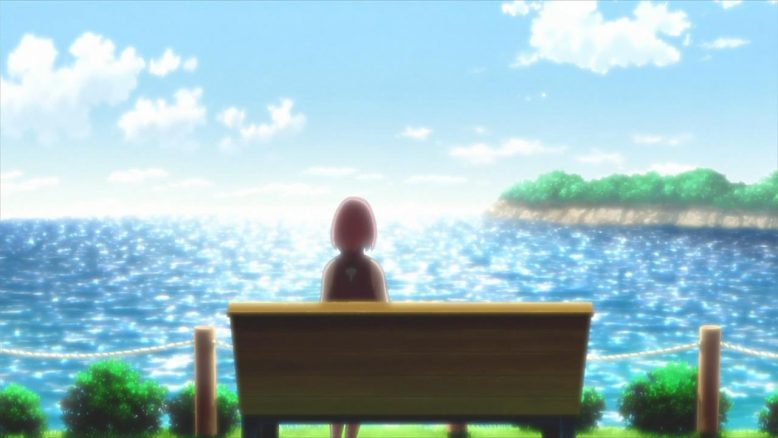 In the ideal situation, Sakura, Sasuke and Sarada would be going out on this trip, but what we get is just so far removed from that, that it just…. Hurts. It really shows the disfunction in the Uchiha household, and its rather painful and harsh when you peel back the layers of comedy and cheer that the show uses to mask these very sad facts.

And the episode as a whole, shows how much of a toll this whole family situation has really taken on Sarada. She feels the need to act like the prim and proper adult, likely in direct response to how immature her mother seems to be around her. Even the errand itself, the one where Sarada’s delivering a stuffed animal to one of Sakura’s patients, is motivated by the fact that the patient in question received the toy from her father. To make matters worse, the whole reason Sarada gets distracted and loses track of said Stuffed animal during her delivery, is BECAUSE she gets the rare note from her mother, showing some genuine affection. It really hones in on the fact that despite how well adjusted Sarada seems to be, she’s really pretty darn lonely. 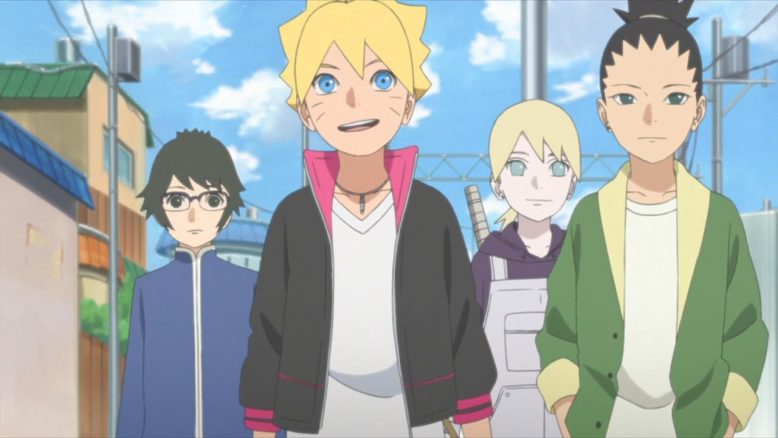 Just hangin’ out with Boruto and the Bros!

And as if to really belabor the point, the show, quite brilliantly, contrasts how Sarada and Boruto live their lives, throughout the episode. While Sarada tries to maintain appearances, and is largely by herself, Boruto is shown, multiple times in the episode, having a jolly good time with his friends, and just simply put, enjoying life a lot more. Sarada on the other hand, ends up having to hide the few times she does even start to cut loose and have fun, mostly due to the persona and reputation she’s built up.

Sarada does have friends though, and its Chocho that I think, really steals the show late in the episode. Its just nice to see Sarada have someone that she can turn to and rely on, something that I think seems to in real short supply. There’s a real nice sense of chemistry and friendship between Chocho and Sarada, and I actually enjoyed the moments where the two of them were out on their mission to retrieve the lost stuff animal. 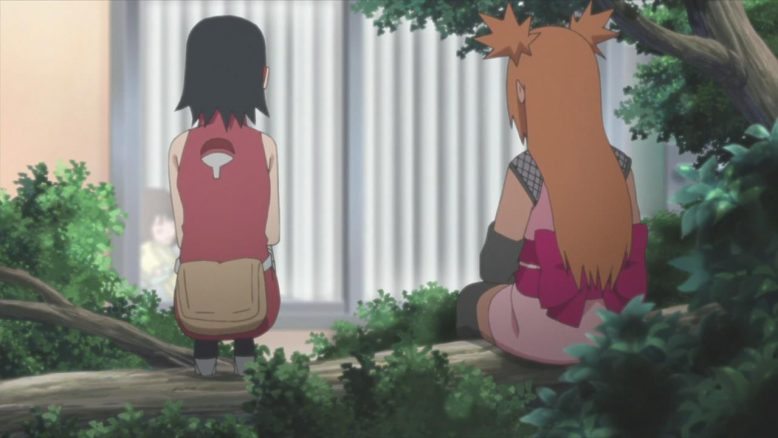 Two best friends… Creeping on a kid in a hospital? O_O

The actual stuffed animal sub plot is kind of silly, and is more or less just a case of a macguffin created for Sarada to have a task to accomplish with some real stakes. It works I suppose, but I think the episode actually ends up showing just how sad Sarada’s life is, rather than how capable she is. I say that, because part of me really does believe that the intent of the episode was to show the latter, rather than the former.

The way the episode ends, for instance, seems to suggest that Sarada really has everything under control. That final conversation between Sakura and Sarada, shows that Sarada acts like nothing odd happened that day, and her struggles are largely left unknown by her mother. So, the reason I’m not sure about the intent behind the undertones I saw in Sarada’s family, is because it could just be bad writing. See, I think a large part of that has to do with Sakura’s trip itself, the contents of which, may have been the result of just bad writing. I say that, because back when the show was addressing Boruto’s whole “power awakening” issue, it failed to include Hinata in the whole “trip to the in-laws” episode as well. Thus, a part of me wonders about the writer for this series, and if he/she just isn’t great at portraying family life, which incidentally Kishimoto himself was a master at. 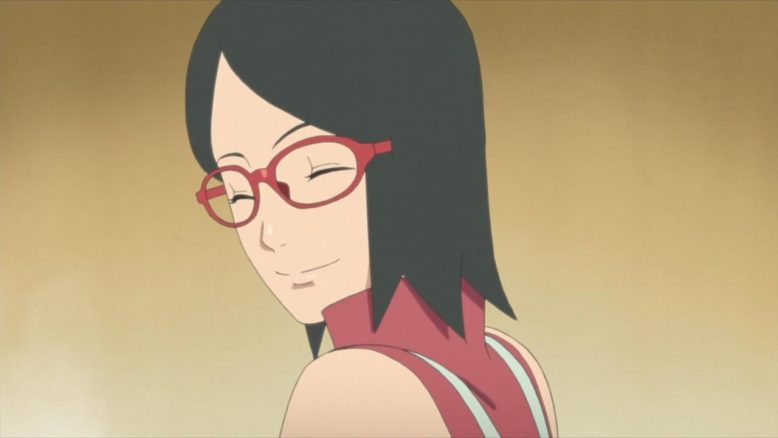 That smile, that smile almost made me CRY! Hang in there Sarada, you the Real MVP! ;_;

In the end, I guess I’m not sure what the show was intending to show me here, but I got some pretty heart breaking facts from this week’s episode none the less. There was some emotional stuff here for sure, and it definitely changes my perspective on Boruto’s family situation, if nothing else. I won’t call this episode a complete winner, because it had a pretty cliche scenario, and some of the depth I found in it might not have been intentional but… I was still pretty intrigued watching the show this week, which is a real win for the its first Sarada-centric episode.