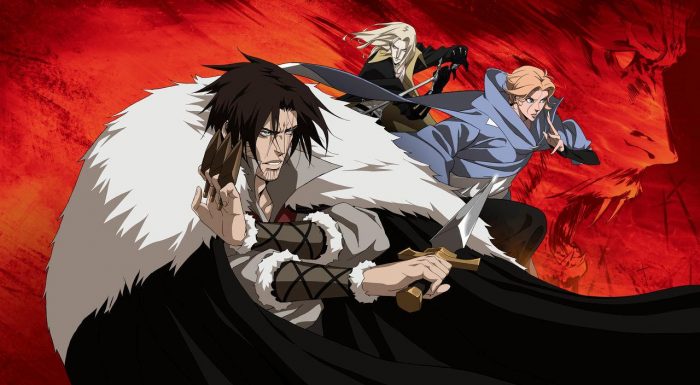 Is it technically Anime? Perhaps not, but it definitely felt like the Netflix Castlevania anime sat somewhere between a 1990s western cartoon series and an anime series from the same era. Needless violence, extreme gore and a pretty dark storyline, this show really felt like something out of synch with modern day entertainment, and yet, there was something that this game adaptation did better than even some of the anime we see today.

Castlevania as a series evoked a ton of different feelings of nostalgia from. It reminded me of stuff like EXO Squad, Double Dragon and some of the more cheesier but adult centric cartoons of the 90s in terms of tone. The adult centric gore reminded me of something like 2000’s Heavy Metal animated movie, while the art style and visuals were pretty reminiscent of Hellsing and Trinity Blood. And the action? The action was pretty darn solid, with one of the best fight scenes I’ve seen in anime this year.

But beyond all of that, what I think makes Castlevania stand out as an animated adaptation is the fact that it also very much felt like it had the spirit of the video game series that its named after. The tone and style, with the heavy gothic look and the character design, seemed like something right out of the games. Plus, the story itself tackled something that I’ve always wanted to see, a fleshed out “coming together” story of Alucard and Trevor Belmont teaming up to take down the big bad himself, Dracula. 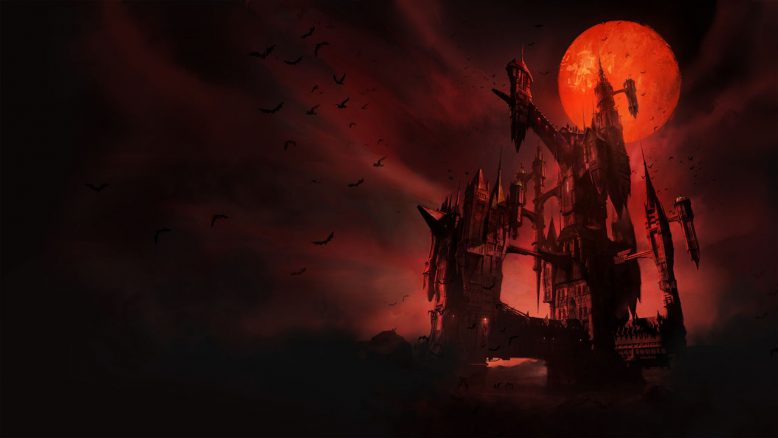 Now, it may seem like I’m singing praises for Castlevania left and right, and until this point, I very much have, but Castlevania is not a superb show. Its a short one, clocking in at a mere four episodes (24 minutes a piece) and feels more like something akin to a promo OVA for a game, rather than an actual solid, stand alone TV series. What’s odd about this particular series is that isn’t a promo for the games themselves, as Castlevania has long been left out die by its own company, Konami, who’ve all but ejected themselves from the video games business entirely.

So the big question then, is regarding who Castlevania is even really for? And the answer to that, I think, is that its more for the western animation industry, than anything else. Castlevania represents the first real foray for a western production to tackle a story in the style and flare of something that Japan’s been doing themselves for ages. Sure we’ve gotten the occasional “Avatar” franchise or a few american tv series animated by eastern talent, but this really does feel like the first “anime” series that’s been made by western creatives for western audiences.

It feels like Castlevania, with its first season, is more of a proof of concept than anything else. It proves that western led animation, given a chance and led by the right people, could very much provide a nice deal of variety and even some competition for the very seasoned and well setup Japanese visionaries and directors of the animation industry. But it also proves, I think, that this western led approach has a lot of kinks to iron out, and a lot of improvements to make, before it can even hope to touch any of the top tier anime series coming out of Japan today. 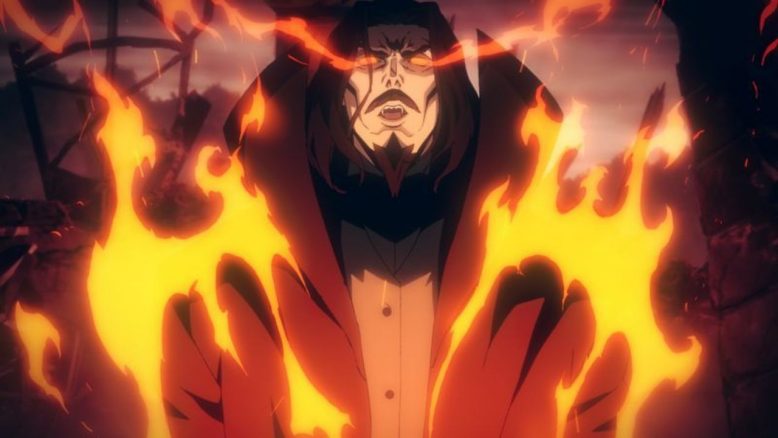 As anyone who’s ready my episode blogs and reviews will know, I hold pacing in pretty high regard. Immaculate pacing, in my mind, is always the thing that separates the “neat concepts” from the sure fire “homeruns” as far as anime goes. And its the pacing in Castlevania, that’s horribly uneven and perhaps the biggest problem of this new show and franchise thus far.

The story rushes in spots where it clearly shouldn’t, and lingers too long at certain scenes where it clearly doesn’t need to. A good example of this, is of course, in setting up Dracula and building up the reason for his eventual warpath of destruction and evil. The story definitely has the right beats, and even establishes a nice brand of chemistry between Dracula and the woman he ends up falling in love with, but the events that lead to the Dracula in the start of the show changing from a somewhat benevolent vampire to a full on villain, just happen waay too quickly in the span of one episode.

In contrast, in the very next episode, we get a bar scene that introduces us to none other than Trevor Belmont himself, that focuses waaay too much on some unimportant side characters that are supposed to be nothing more than a device to set the scene. Instead of simply being window dressing for this particular world, these side characters end up over staying their welcome, have stupid conversations about bestiality and incest that really have no bearing on the larger plot as a whole. 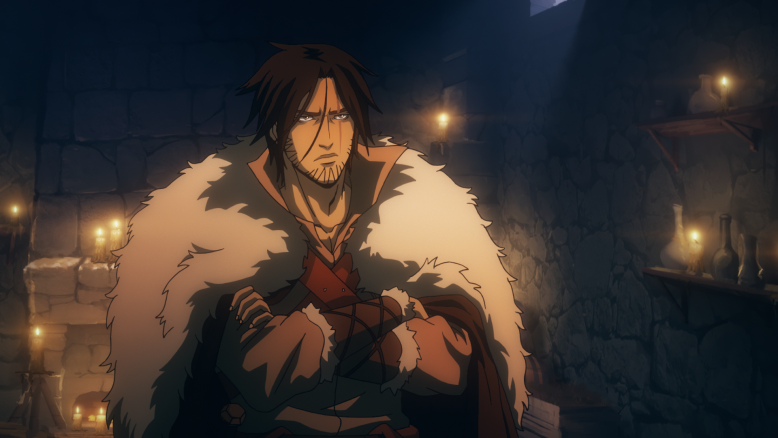 And really, the whole “arc” of the first season is Trevor Belmont basically deciding to fight, once again, against the supernatural that his family had been fighting for generations. On the one hand, its a really interesting angle, putting the famed “family of heroes” from the games as a fallen, failed clan. The idea that the last of their line is a stupid drunken wanderer who just floats from place to place, depressed and trying his best to avert his eyes from the sad reality of the world, is a pretty neat concept.

Its unique, it makes sense, and its adds some flavor to what could’ve been an otherwise very one dimentional protagonist. Trevor has a pretty nice sense of humor, a charm and a wit that sets him apart from the rather bland character that’s been found in the video games. What doesn’t, unfortunately, work all that well, is his transition from the drunk wanderer, to the skeptic hero. Trevor just never really feels like he naturally shifts his opinion for any solid reason, other than the fact that there are people that are too stupid to help themselves. His sudden decision to act and save the “speakers”, as they’re called, is underdeveloped and his resulting shift to full on hero by the end of the four episodes, feels forced and unnatural as a result.

The story for the majority of the show feels pretty, unimportant, as a whole. See, Trevor arrives in this town, he ends up fighting against the truly corrupt church, and ends up saving these “speakers”, a group of scholars that hold knowledge from the future that can save all of humanity. Its in this quest, where Trevor has to basically save the people of the town and the speakers, from the church, that really falls flat. 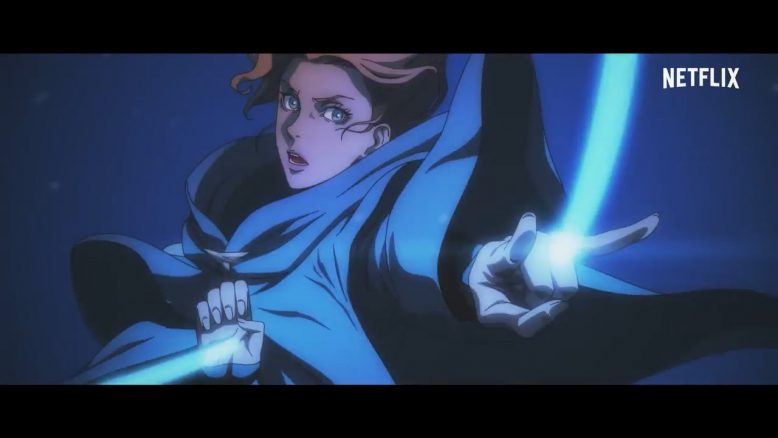 A big reason for that, is of course, the Church itself. Simply put, the church is so cartoonishly evil, that its hard to really invest yourself in the contest of wills between Belmont and the Holy order. The church is quite clearly the villain here, with a certain priest basically being crazy evil, all without any clear motivation other than a weird lust for power, everyone and everything be damned.

Its in this weak antagonist, that I think the first season really doesn’t work all that well. Its also why the final episode of the series really works, because its at that point, that the whole concept of the church and its evil bishop, is thrown away. The monsters end up killing said Bishop, and he basically gets what he deserves for burning Dracula’s wife and starting this whole mess. In the end, he turns out to be nothing more than a macguffin, something to just start Dracula’s whole murder spree on humanity.

Once he and the Church are out of the picture, the show finally moves on to introducing Alucard himself, and having him meet Trevor and the speaker Magician Sypha. The meeting and subsequent fight between Trevor and Alucard, is really a work of art. The fight is awesome to watch, with a beautifully choreographed fight scene that has whip clash with sword, before the two protagonists engage in an equally awesome sword fight. Trevor and Alucard have a really solid chemistry together, one as the funny ruffian, and the other as the sarcastic and proud nobleman. 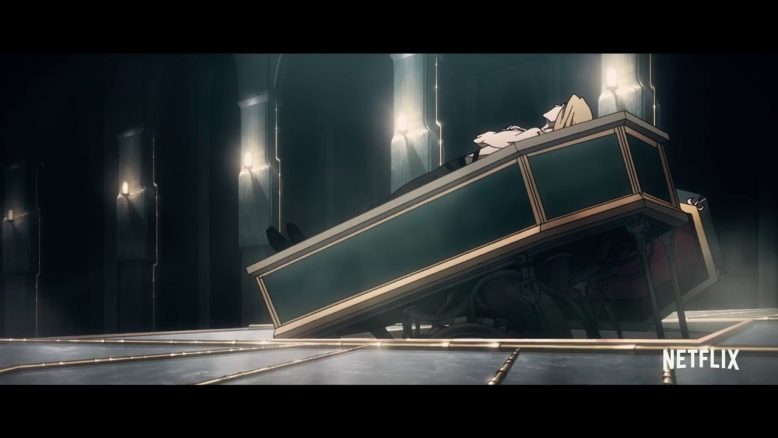 Alucard and Trevor as basically the perfect foil for one another, and its in their exchange and interplay, that the series best dialogue, best jokes and a genuine sense of excitement are created. As the two finally join forces and decide to take on Dracula, the series ends.

Yeah, the show ends just as the real story seems like its beginning. That, if nothing else, is the reason why I originally described the show as something similar to a promo OVA, because it really does feel really unfinished and incomplete. The good news, of course, is that there is another season, with 8 episodes this time, in the works and coming in the future.

So… Looking at the series as a whole, its hard to really recommend the show to anyone other than the really hardcore Castlevania fan. Its the Castlevania fan, the one that can and will recognize Trevor or Alucard, that will probably enjoy this series the most, as far as story goes.

The production. on the other hand, is pretty darn solid and very impressive. The art direction and animation is pretty darn great, and the sound design and voice acting, superb. As an animated production, I’d say Castlevania not only stands toe to toe with Japanese produced anime, but it actually exceeds a lot of those very series when it comes to the action sequences. Its been a while since I’ve had my jaw drop from a fight scene, and I’m someone who watches a good chunk of shounen on a pretty regular basis.

In the end, I’ll say that I’m hopeful for the second season of this series. With a longer run time, and its primary cast more or less introduced, I hope the show can level up its writing and storytelling pacing to match the excellent production values. The show needs to build Dracula into a truly strong and powerful villain, and it also has to keep the interplay between its three leads going. There’s a very rich and powerful world here to explore, and some good character work to build on, so I’m truly interested to see what the show’s creative team can do, their second time around.