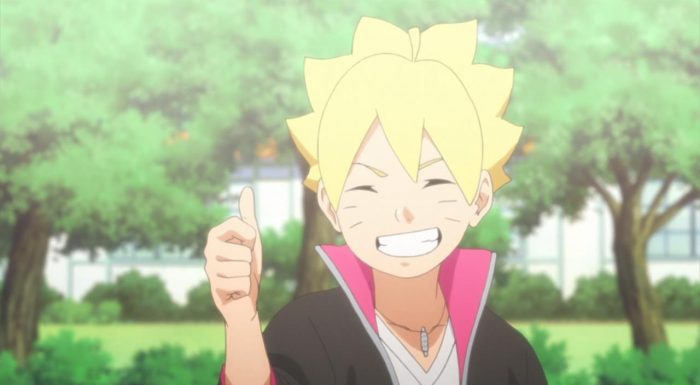 There’s the ending to an arc, and then there’s the epilogue. This week spent another episode on the whole Sumire arc, but I’d say it worked because it served as an epilogue that was definitely needed. It is interesting to note that, despite being titled “A New Path”, this week’s episode really did feel like the show was settling back into the status quo its been so comfortable in, rather than doing something entirely new. Is that good? Is that bad? I mean, a big criticism I’ve had for this show is that it really doesn’t change at all, and that the actions of its characters don’t seem to have any form of consequences. 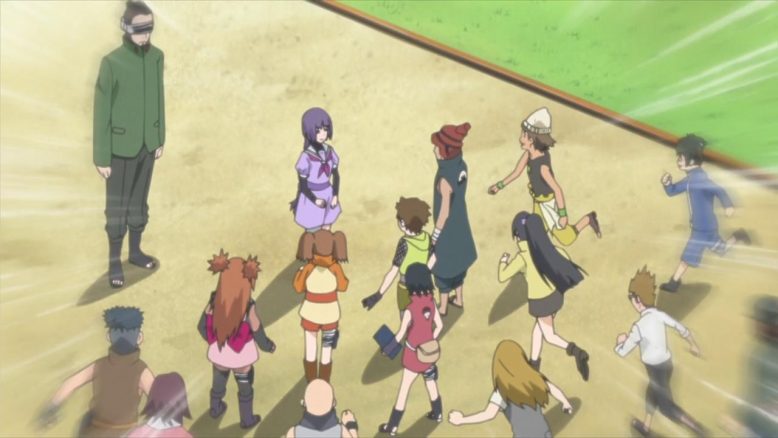 And that is still true here, but as while I’d generally knock Boruto down for a resolution like the one we got this week, I feel like the show still had enough good will to basically be able to do what it did here. Sumire basically rejoined the Academy and ended up being welcomed back with open arms. Its was a bit shocking that despite Sumire’s rampage, and the scenes we got of her “victims”, the show told the audience, point blank via Shino that she “didn’t hurt anyone”. The more apt description would be that she didn’t actually kill anyone, but I suppose in terms of this series, that really is semantics, since no one really actually gets hurt or dies.

The thing I did like, and why I’m more inclined to give the show a pass for the whole “everything’s back to normal” ending, is that it did kinda provide a case for how things have changed despite the seeming reverting of the general status quo. While most people are unaware of Sumire and what she was doing, certain characters have grown from their experiences with her and are forever changed by it. 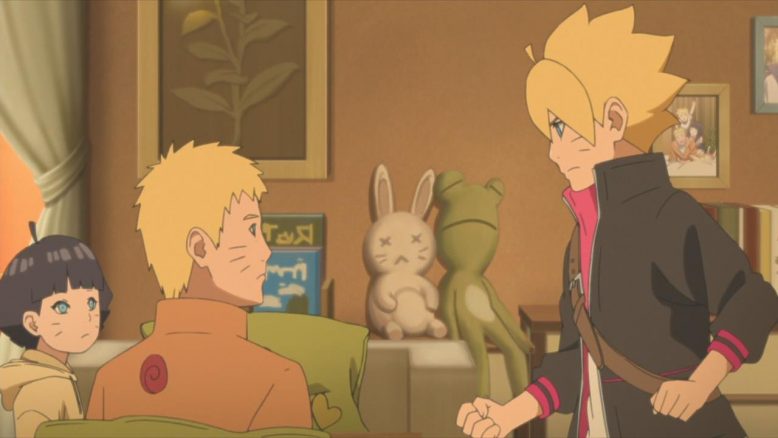 There’s Boruto of course, who’s moved on from being a simple brat, to someone who actually cares for and even leads those around him. He’s emerging as a leader and a protector, and while he doesn’t have the same desire to lead and run the village like his father, he is very much following in Naruto’s footsteps to some degree. In any case, Boruto’s growth has been the most tremendous, both as a person, and most definitely as the title character and protagonist.

Here’s the thing, I liked Boruto when the series started, but a lot of that had to do with the groundwork laid down by the Boruto movie that preceded this series. With its first arc and the whole Sumire story, the show has, at the very least, managed to have me truly care for and like Boruto as a character as he’s shown in the series itself. And as I’ve said repeatedly in my coverage of this series, I actually like Boruto as a character a lot more than I liked his father, especially when you compare them at a similar point, in terms of age. 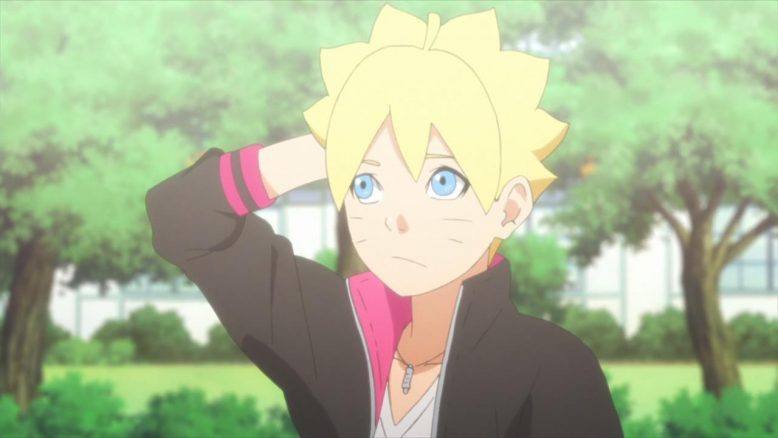 I just like the place and niche that Boruto’s carved for himself. He’s very much the main character and the hero, but he’s both those things in the shadows. Unlike his father who very much took center stage and was very visible, Boruto’s first real act of heroism is something that only a few people know of. Heck, even among those select few its only Mitsuki and Sumire herself that know the whole story. And of course, what’s great about all of this, is how little Boruto cares about people knowing what he did anyway. The smile that Boruto gives Sumire from afar, is truly indicative of the sort of character Boruto is, and how different he is turning out to be from his father.

Of course, its not just Boruto who’s grown here. We also have Mitsuki, whose really settled into his obsession and friendship with Boruto. There are some people who really need someone to follow and be attached to, and I think Mitsuki’s arc thus far has really been about finding that person, and sticking to them like glue. The trio of Boruto, Sarada and Mitsuki is still incomplete, but I think one part of the equation, i.e the duo of Mitsuki and Boruto, is very much set. Mitsuki as a character still has a lot of interesting tidbits to him, and while he got sidelined in the movie, its great to see him get some focus in this series. 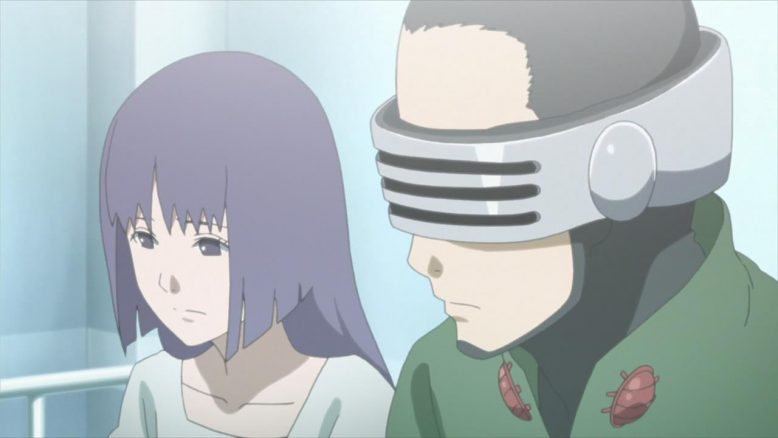 Last but not least, lets talk about the adults of the show. Lets take Shino, for example. Shino’s definitely grown as teacher, and while I’m still not entirely sure about him teaching anyone, let alone kids, I suppose he’s shown some maturity and growth in the recent episodes. Backing up Boruto, taking care of Sumire, I’d say that Shino is kind of turning into a decent adult. It remains to be seen if the show undoes all that its done with him, but the conversation he has with Sumire this week, definitely pleads a case to the contrary.

So yeah, things more or less conclude with Sumire coming back into the fold, and everything resolving in a pretty neat manner. The episode doesn’t just end there, though, and the last few scenes are pretty much setup for the next big arc. If you’re confused about all the talk of Sasuke, and the two figures that seem to warping through dimensions, then I’ll just say that this is all pretty much tying into the story of the Boruto movie. Those two figures are the main antagonists, and obviously Sasuke plays a pretty big role in it all, besides Naruto and Boruto. 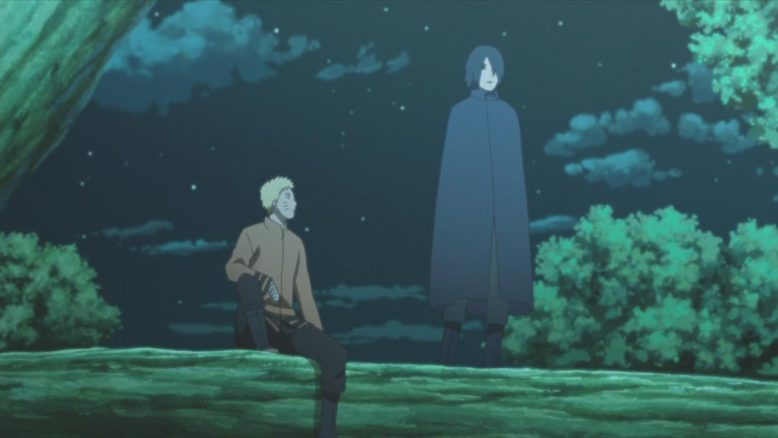 Those final scenes definitely put an interesting spin on things, as far as future arcs go. I know that in the Boruto manga, the story actually goes over the whole Boruto movie story and retells it, which was something that I remember being quite controversial at the time. Personally, I’d rather not see the Boruto movie story AGAIN, if only because I’ve not only seen that story before, but because the movie did a pretty great job of telling it. The Boruto movie is still the best Boruto story I’ve seen thus far (overall), and I think the show needs to go the extra mile, and tell new, interesting and different stories, to make a name for itself.

Next week doesn’t seem like its giving us a straight time jump into the movie though, so I guess its still not completely confirmed that we will be seeing that story again or not. In any case, I’d say Boruto has made a case for itself to warrant continued coverage from me. I also hope to get these posts on the episodes out sooner, but its obviously been challenging with Boruto airing in the middle of the work week and what not. The two weeks of missed coverage, was more or less because of some personal issues, so at the very least, I intend to get a post up on the latest episode a few days after the episode airs. Either way, I suppose I’m enjoying watching and talking about Boruto, so its definitely doing something right, even if it isn’t the best currently airing Shounen anime series out there.