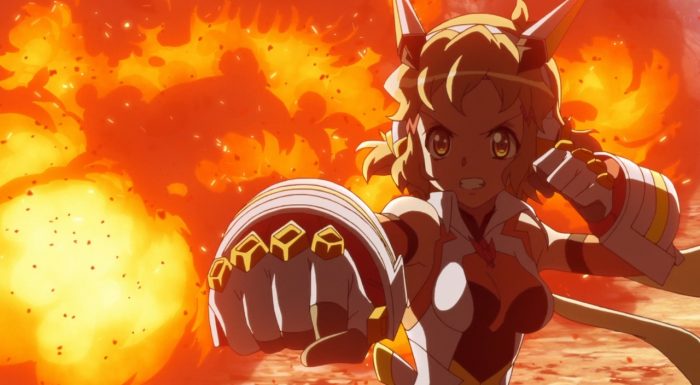 Symphogear is back! Admittedly there are no subs available yet, but there was no way I could wait to talk about this first episode until that happened. It is very fair to say that GX was not nearly the best season of Symphogear we’ve had so far. But, I will say that AXZ knocked the first episode out of the park. If they can maintain this momentum then we are in for one heck of a season. And honestly I think the focus in this episode is stronger than what we had in the first episode of last season. While GX had that focus on Hibiki’s father and her weirdly refusing to fight people….this doesn’t. I mean seriously Hibiki rips a freaking tank apart and is having none of this “I can’t deal with fighting people” stuff. 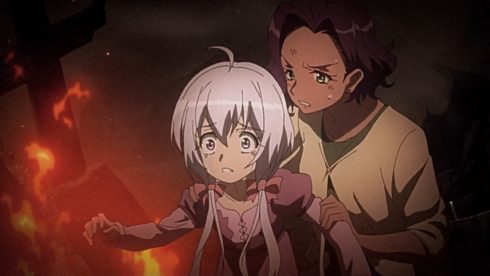 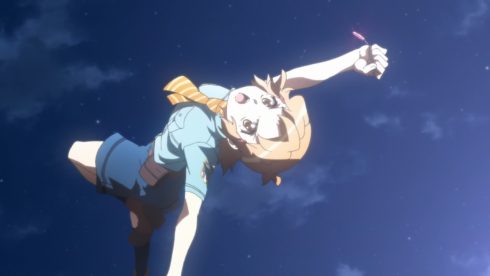 The main emotional focus in this episode is on Chris. I will fully admit that Chris is my favorite character in the series so I’m ok with this. Also the focus doesn’t feel weak as it did in GX. They are going into a war torn country. The same war torn country (I think) that her family was killed in. There’s a lot of reasons for her to look upset or frustrated in this episode. This is digging into something that she hasn’t gotten over. Chris has forgiven her parents (who I still think were stupid to take their kid into that nightmare), but seeing this kind of tragedy would bring up painful memories for everyone. This is the place where her life went to hell and she went through a series of traumatic experiences. Facing everything that happened to her isn’t a bad place to take her character.

I also appreciate that Hibiki and Tsubasa aren’t missing that this is bothering her. Hibiki can see it and Tsubasa outright tried to talk to her about it. It shows Tsubasa’s growth that she’s not ignoring what Chris may be going through and is trying to offer helpful advice. I am curious to see where they go with this. We got a flashback more focused on how Chris’s parents died and someone that was with her at the time. Someone she blamed for her parent’s deaths. Although to be fair human traffickers captured Chris so I think this person does deserve blame. Clearly she failed to keep this kid safe. Then Chris ended up with Fine torturing and manipulating her, which isn’t great either. 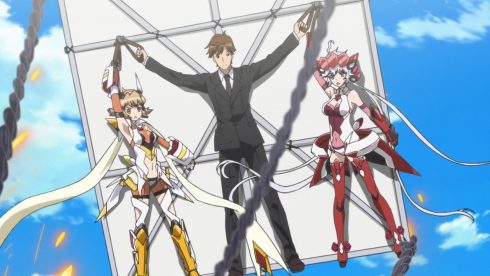 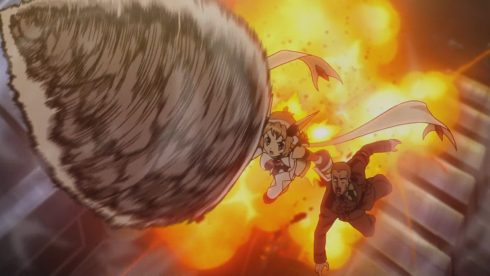 This episode was almost all action and I approve! They had the first scene with Hibiki and Miku which was nice. A little focus on summer schoolwork and such….before a helicopter shows up and whisks Hibiki off to action! And holy crap the action was on point in this episode. This was amazing. Instead of just a bit of rescue work (which was awesome) we dropped Symphogear users into a warzone! They weren’t just fighting noise (although the alca-noise are used as well), but soldiers, tanks, and flying fortresses! It is a shame for anyone to watch this episode and not love the action side of it.

We even had hilariously awesome moments like Shirabe and Kirika opening up helicopters doors….so a missile can pass through it! It was just full of insanely fun action scenes. Hibiki ripped a rank apart! Chris was tanking a rain of bullets…before spitting one out! So yeah Symphogears can handle conventional weaponry just fine. Love the teamwork. Hibiki catching a massive shell being fired at Chris, tossing it up, and then Chris destroying it. The songs were really good as well. I wasn’t sure at the start for the new one for Chris, Hibiki, and Tsubasa but really started to like it as it got going. We also got Hibiki’s new solo song (quite nice) and the new trio song for Maria, Kirika, and Shirabe. Even the villains had a moment for singing…which resulted in them massacring a dictator and his generals! 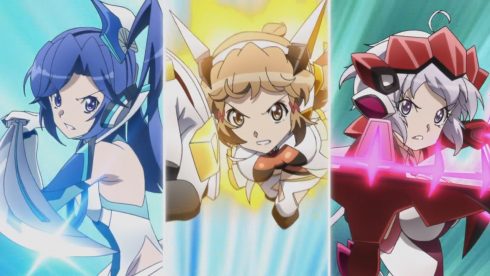 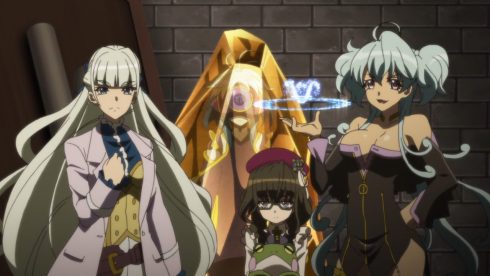 Yes, there was a fanservice shower scene as well. You can’t have some Symphogear without at least one or two of those in a season. But to be fair this is after they went through an awesome battle scene which I can understand needing to clean up after. At least they were continuing the story development even in that scene. There is a point made that this is the last of the Linker they have access to. Now we did see Doctor Ver give Maria that data so likely we’ll figure out how to deal with that problem this season. And there was also the continued focus on Chris facing her traumas in that scene as well.

Let us take a moment…and blame Fujitaka for screwing up. You go on a covert mission…and forget to mute your laptop!? I have made that error as well. It is embarrassing to forget to mute the laptop and have a random add or youtube video start making sounds during a lecture or something; in a life or death situation though…it’s more than embarrassing. A few people died because of that screwup. At least he managed to stay alive along with Aoi long enough for Maria and company to show up. 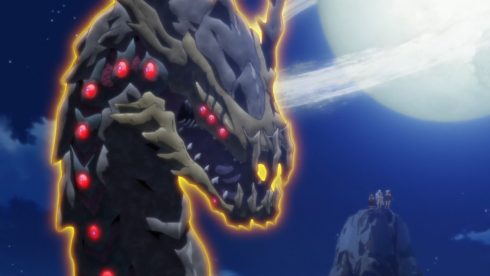 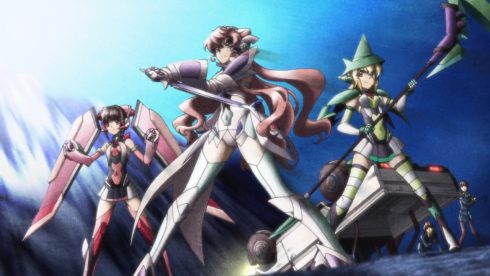 And with that the B team gets to fight a dragon! That should be fun. Talk about starting on a high note with them fighting giant monsters of this scale right out of the gate. This is also effective in introducing the villains for this season. This is a secret organization that had ties to both Carol and FIS back in Season 2. Clearly they are going the route of tackling one of those “villains behind it all” scenarios. This trio did make a solid first impression with murdering that dictator and using the main cast to find where he was hiding some important artifacts.

That moment does make for an effective contrast to the main cast. Hibiki and company being careful not to kill the soldiers they are up against while saving the day. But this trio used their songs to activate pins they gave to their ‘allies’ to kill them and transform them into some sort of orb. That was a different kind of using people than Carol and her autoscorers kiss of death 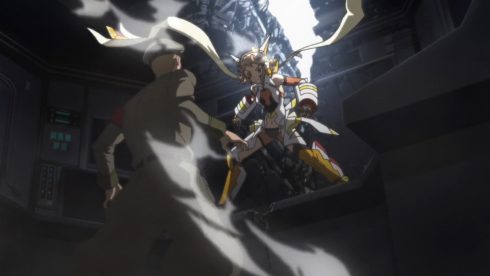 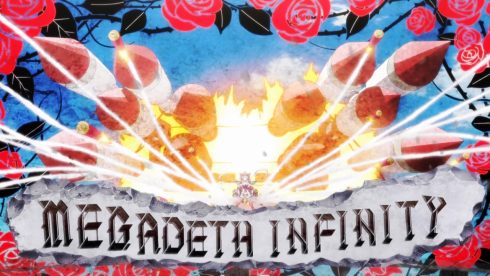 So yeah, I’d say this is a pretty darn good start to season 4. We’ve got a solid trio of villains, some great action, some great new songs, and solid directions for character development. If they can really carry this forward then we’ve got a chance at the best season of Symphogear to date. I would love to be able to talk about that instead of how things fell short. Season 3 was a conflicting series. There were some highs in season 3, but some serious lows for the franchise as well. So far AXZ is off to a running start. Unfortunately there is still no certainty on who is going to be subbing this. But, regardless I’ll be talking about it this season.