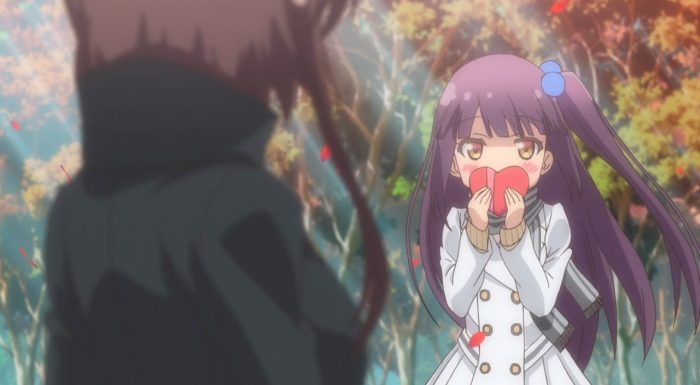 Valentine’s Day has never really been a thing for me. When I was a kid it was a day when everyone in class got candy from everyone else in class, due to the “you’d better have brought enough of that for everyone!” attitude enforced by teachers. But once I grew out of that stage it ceased to be a thing that I noticed. However, judging from the number of anime I’ve seen that have had a Valentine’s Day episode, I can only assume that it is a much bigger thing in Japan. Certainly I had never heard of anyone hand making their own chocolate treats to give to their preferred partner before I encountered anime. 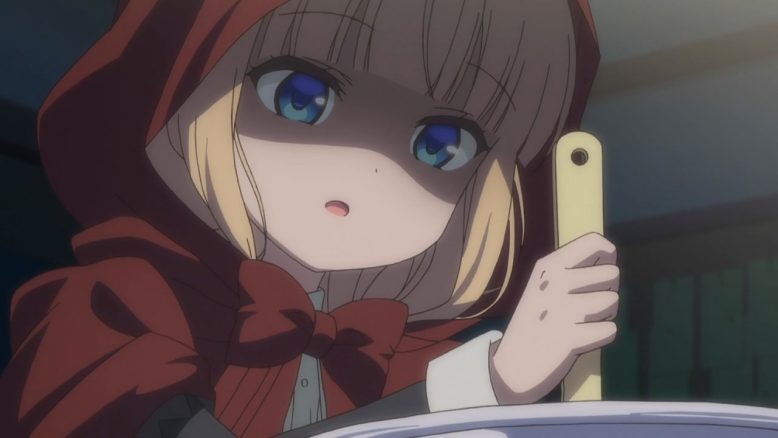 Anyway. This episode begins with Valentine’s Day shenanigans. As one might have come to expect by now, Chiaki is the number one target for all affections in the school, so every girl there descends upon her in a rabid pack with chocolates while attempting to spit out confessions… as if they are supposed to somehow get a different result than the previous 1000+ people who just finished giving chocolate and confessing to her. I can never feel too impressed by these cultish crowds who swarm around swarm around school favorites, squealing mindlessly at the mere sight of them. Of course, girls like Yua and Mayu are different, since they actually know Chiaki personally. Not that they really have much more success so far as their confessions go, but hey. 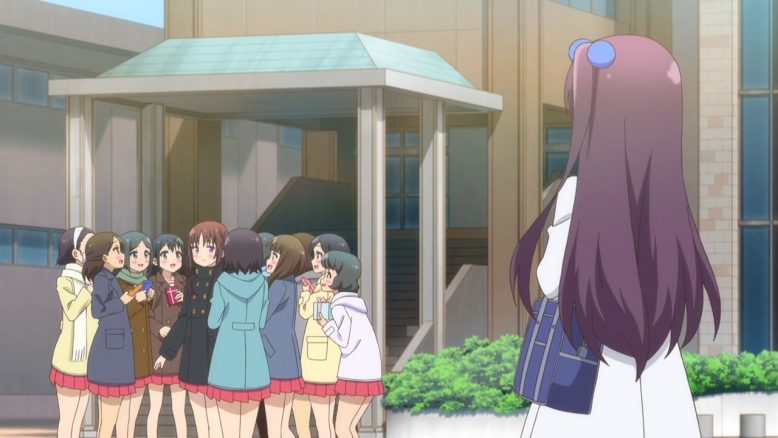 The second half of the episode is more interesting, as Chiaki invites the three Hitotose residents out to a play at a theater in Shimokitazawa. While Myau quickly jumps to the assumption that Chiaki is asking her out on a date (admittedly, the way Chiaki asked is not unusual if that’s what she had been doing), and is rather put out to discover that the whole group is coming along, she pulls herself together after the others mention that that town is where the theater they decided they will one day perform at, the Suzuran, is located. Since she was the one who presented the idea of them performing at Suzuran to Hinako, it wouldn’t be right for her to sit and sulk rather than go see it with everyone. 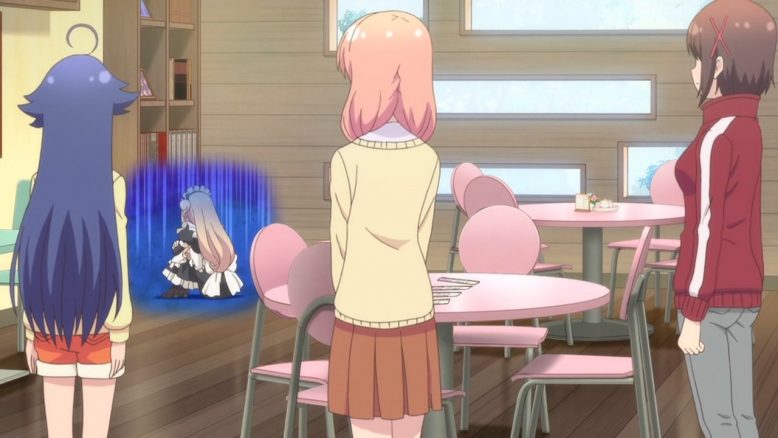 The troubles the girls have with their subway trip are rather amusing. It’s not surprising that Hinako would get lost: out of all of them she’s the most airheaded, and also by far the least experienced when it comes to riding the Tokyo subway system. On the other hand, I can’t entirely blame her. A little research tells me that the Shimokitazawa subway station has been undergoing renovation since 2013, and a whole host of construction walls and barriers and whatnot inside the station truly have turned the place into a maze. On the other other hand, Hinako’s decision to wander off in search of everyone after they’d already contacted her and headed off to find her is particularly foolish, so there’s no excuse there. 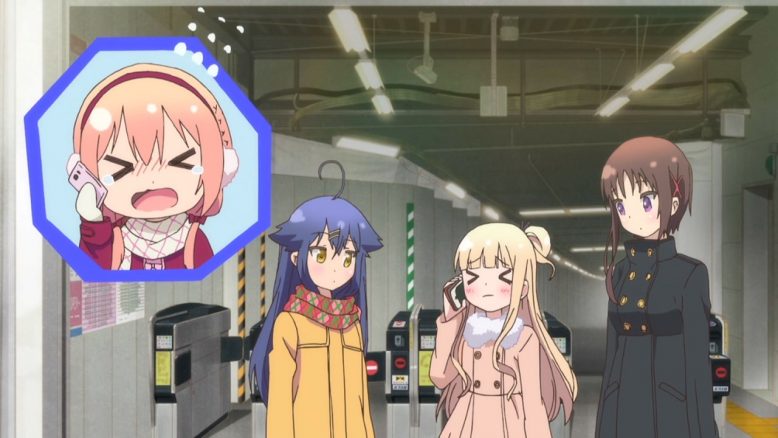 After they finally meet up, they head off to see the thing they’re most interested in. The Suzunari theater, the theater that was renamed Suzuran for this series, is indeed a significant historical location in terms of theater in that area. According to my research, it was the start of the Honda Gekijou: the theater company that expanded create most of the theaters in the area, and which still runs them. It is a small place in comparison with many theaters, but for those who are interested in such things it has a significant weight of history behind it. The more I’ve read the more I understand why the girls might see it as such an important goal to perform there some day. 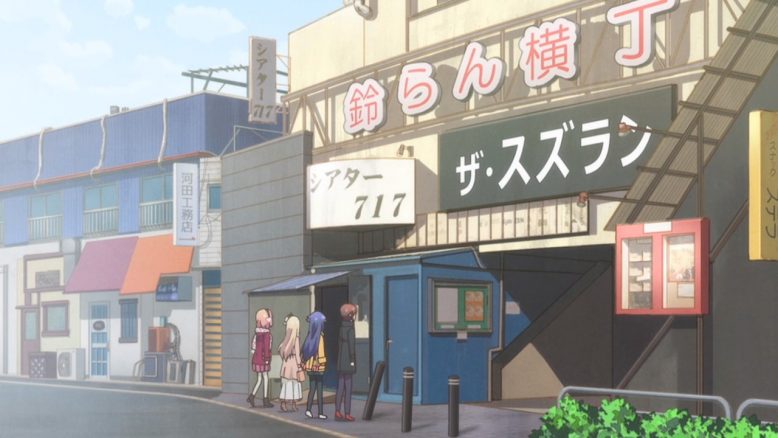 Just as a side note, I haven’t had as much luck identifying the theater that the girls actually went to to see the play in this episode. Photos of the theaters in the area don’t seem to match the views either inside or outside that we get of it, so I really can’t figure out what it might be. It is, of course, possible that it was invented entirely for this scene, but given how accurately they recreated the Suzunari as Suzuran, and the amount of detail in the backgrounds when walking through the town, I would think they would have been entirely capable of duplicating another theater. It is, of course, possible that I simply have overlooked it in my searching. 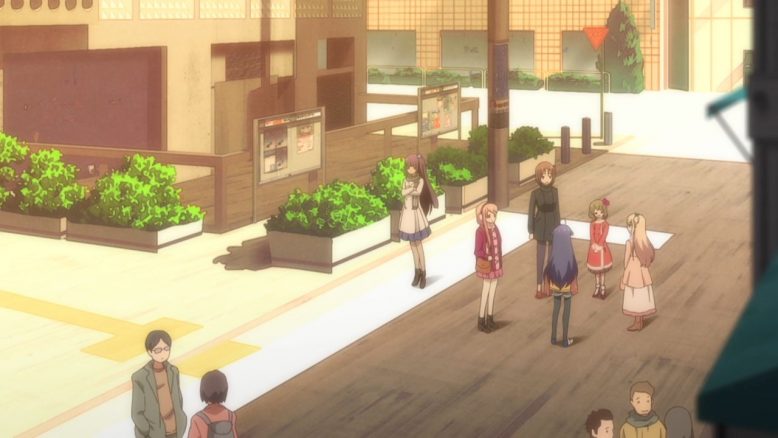 Anyway, the series comes to a conclusion on a gentle note, with everyone coincidentally meeting up after the play, and going off to eat dinner together and talk about it with each other. And life goes on. No dramatic conclusions, or significant closure to anything. And that’s really the best way. After all, this isn’t a story that has come to an end, but rather just a small slice of these girls’ ordinary lives that we’ve been watching. Life rarely has designated story arcs to it: it just keeps flowing, one day to the next. Even though our view into their lives is over, they will keep on living, much as they have in these past twelve episodes. Let us thank them for their time, and wish them well as they continue on from day to day. 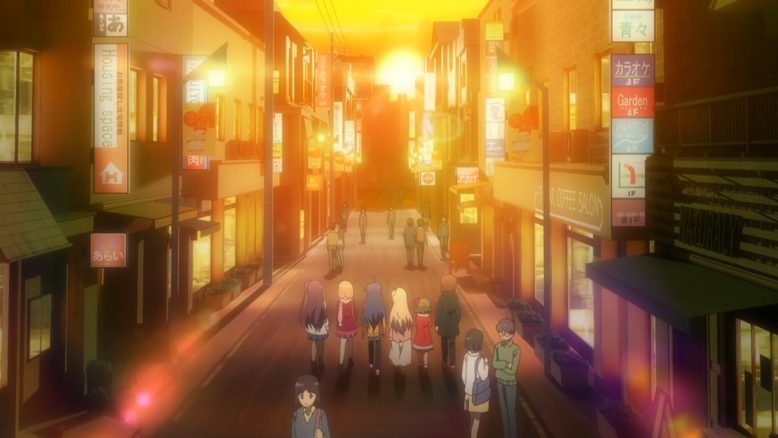 This has been an enjoyable series, if not as strong in some areas as I might have liked. I’ve enjoyed spending time with these girls, although I wish we could have gotten to know some of them a bit better. Also I do wish the acting and theater premise had been explored more deeply. Still, for a comfy show about mostly nothing that you can just watch and relax, this fits right in as this season’s offering. I intend to have a full review of it up soon. And I mean actually soon, not just “soon” as sometimes happens. 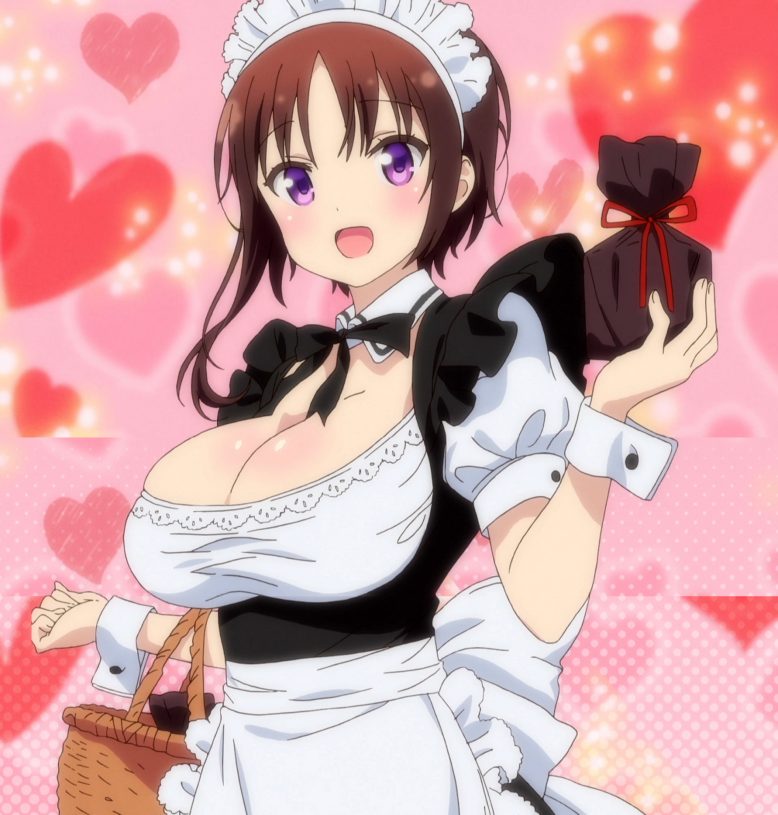 Oh, and there was a bit more fanservice to round out our final episode, too.