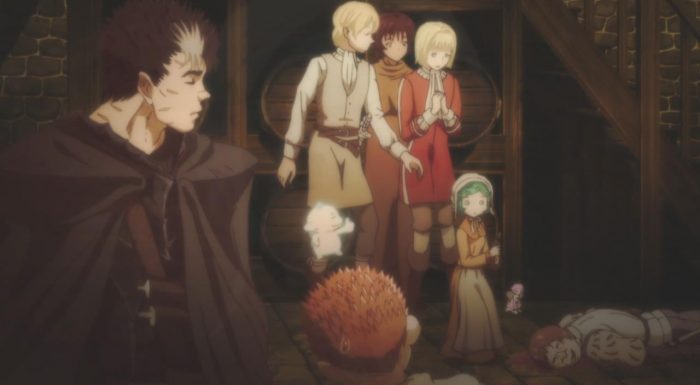 So… That was an odd spot to end the series at, wasn’t it? I honestly don’t really have a lot to really say about these last three episodes of Berserk, and I’m sure my tardiness on even this post speaks volumes about what I thought of this series. Here’s the thing, I’m not just really late with this post, I actually actively delayed watching these last three episodes of Berserk. The main reason, for that, was sadly that I just didn’t have anything to look forward to, with regards to this series.

Not only did I not expect the series to impress or wow me at the end, but I just couldn’t see a decent stopping point for the series to end on, with regards to its source material. There’s a whole giant arc that just kind of starts in between the events of episodes 22 and 23, that the series more or less skips over. The problem here, is that those events need to be covered for the story to move forward in any meaningful way. And here’s the real issue; I doubt that Berserk’s 2016-2017 animated incarnation could even ATTEMPT to cover that arc, with its meager budget and terrible production values. Said arc is basically one huge war, with huge epic battles and such grand scale, that I find myself relieved by the fact this production didn’t attempt a telling of that story.

I’ve actually seen a lot of commentary online in that vein, actually. The sad fact is that this Berserk anime hasn’t really been a good adaptation. Sure, it captured some of the spirit of the manga, and had some decent art direction and voice acting, but the overall end result was pretty lacking overall.

I think its easy to blame the 3D CGI as the major problem for the series, but I don’t think that “alone” was the problem. The Golden Age Arc movies, also featured heavy CGI and while they weren’t amazing, they were still a pretty solid adaptation overall. I enjoyed the movies (also done by LIDENFILMS), I flat out hated the anime series at certain parts.

And its sad that the parts I really hated this show at, were stand out moments in the story. The reveal of Gutts’ Berserker Armor was just… botched. None of the coolness or epicness from the manga was brought to life, and we got some hazey 3D animated fight scenes, mixed with a bunch of static imagery. Simply put, whatever budget, talent and resoures that this series had, they simply weren’t enough to truly do justice to the source material they were covering.

The real tragedy in all of this is, of course, the fact that Berserk would make for a fantastic animated series if it were given its due. Its a grand story, with a rich mythos, great characters, coupled with some less than savory amounts of gore and nudity. Its also a very visual story, mostly due to how detailed and impress Kentaro Muira’s artwork is his for story.

To that end, I’d say the last three episodes of Berserk really disappointed me. I’ll say that it was smart to focus on Gutts and Schiereke as the swan song for the series, but who really cared about it at this point? This story isn’t going to continue in animated form, as far as this particular adaptation goes. The manga is on hiatus again, so if people were somehow tempted to pick up the story, now really isn’t all that great of a time to jump on, even if there’s a decent chunk of content to consume before you catch up.

The problem I think, with this series as a whole is that it just didn’t have the investment from all the parties involved with it. Lidenfilms definitely didn’t give it their all, and perhaps they couldn’t, but the production commitee in charge of this show really just didn’t shell out the money for it.

This series reminds of the D.Gray-man revival we had last year, and it also reminds me of the Ao no Exorcist revival as well. All three series have a lot in common. They’re all series that were hugely popular anime and manga franchies that never got their proper due. They each had a huge fanbase that’s been hungering to get something from them, and each of these franchises just got entirely shafted with their revival efforts.

Like Berserk and Ao no Exorcist, Berserk could’ve made a huge splash and revived itself as a franchise, but what it needed was time, money and care put into it. It needed buy in and belief from those that greenlit this project as a whole, and I think the very safe, risk averse attempt at creating an anime adaptation of one of the best seinin manga ever, was a cheap, budget based CGI mess.

Was Berserk worth it? I’m inclined to say no. This adaptation isn’t going to impress people enough to read/buy the manga, and its definitely not going to last as an ongoing animated franchise.

My only hope is that 5-10 years down the line, maybe someone takes another stab at Berserk, and does it right then. Until that happens, I guess we’ve got a series that really echoes more sentiments around what it could’ve been, rather than what it actually was.