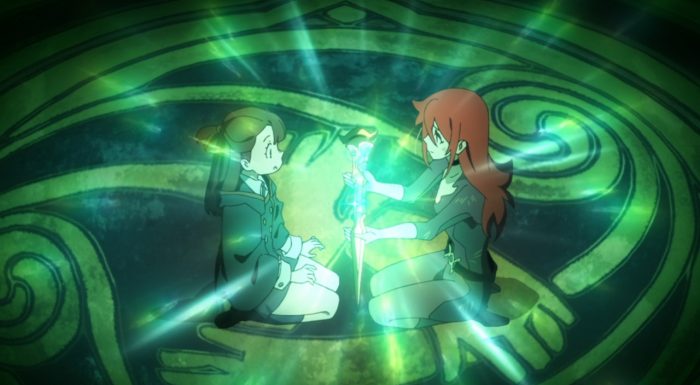 Well things got a bit weird near the end of this one and not in the normal kind of LWA weird. That last scene with Akko laughing and having fun while a missile of doom was going into orbit was….creepy. I don’t think this show will go with a sudden tragic ending, but it is an unsettling way to go into the last episode. The ED kind of just dropped during that very weird last few moments of the episode. If nothing else they have me interested in seeing how the last episode is going to turn out. I’ll at least want to make sure the series doesn’t end with a blindsided tragedy. The more likely result I would hope is Akko finally regaining her magic and being able to resolve things without anything terrible happening. 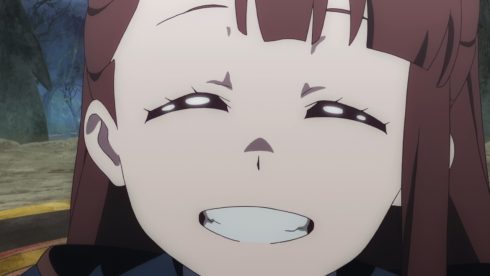 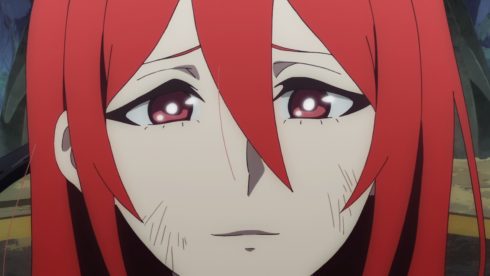 If nothing else it was important to have that heart to heart with Akko and Chariot. It was a bit weird having Akko talk on about her fandom for Chariot when naturally she already knew all of this. But I guess it was important for Akko to treat this like a fresh encounter since this is the first time she’s officially talked to the person she knew was Chariot. And it did allow her to fully express how far she’s come and the realizations she has picked up along the way. It was important for Akko to realize how precious the friendships and help she has had along the way really was. And really it was a sweet moment having her express her gratitude and how much she does care about Chariot/Ursula. No doubt in that she does love the teacher who has given her so much and helped her.

I do also like her choice of returning the Shiny Rod. It is hard to say though if Chariot will really keep it and if she can even use it any longer. There is something to say in that the staff hasn’t rejected her any time she’s picked it up as it did for Croix. It may be possible for Chariot to regain her qualifications to use the Shiny Rod again. But it is also entirely possible the crisis of this last episode might take the Shiny Rod out of all of their hands. Not to mention I kind of wonder what the future holds for Chariot herself. I have no doubt she’d be happy to continue as Ursula and teach Akko along with the other students. At the same time I feel like it would be a shame if she couldn’t try to make a comeback as Chariot. 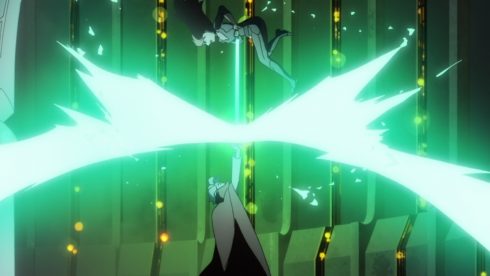 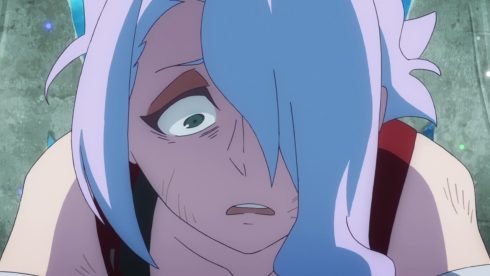 So much is uncertain with how the episode ended here. What will Akko’s future hold with the upcoming crisis? We don’t really know what that missile will do, but it can’t be anything good. Plus there is still the political crisis and the need for Andrew to step up and do something on that front. Still not sure what Chariot’s future holds. Maybe she can be a teacher who puts on stage shows at the school? I do think that Luna Nova might be the best place for her to stick since fresh students should always be able to appreciate a bit of fun so long as the conservative mindset of some witches is shaken up.

And I will say it was fun seeing Chariot do everything she could despite the handicaps that keep piling up on her. Her magic isn’t what it was to begin with and now she can’t even fly because of the pollen. But she still manages to leap, fight and struggle as best she can. Heck she even managed to turn her wand into a freaking light saber! Things may not be ideal for Chariot, but she can still kick ass. And she kind of had to with Croix (as expected) utterly losing control over her own creation. It’s a classic flaw for villains. I do respect Chariot still trying to protect her friend even when she’s been an idiot and traitor. In a sense Chariot just wouldn’t be herself if she was willing to run away and leave her friend to be murdered by her own mistakes. 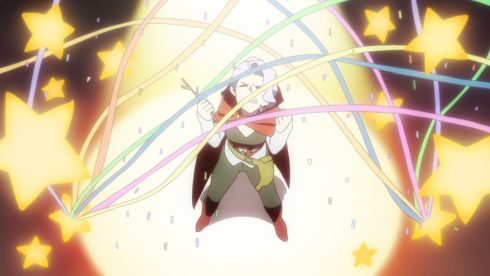 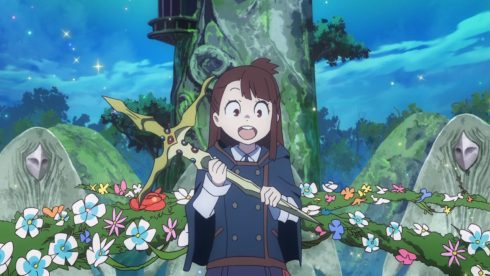 In the end this was a solid lead in to the last episode. Though I hope the last episode can deliver. It feels like they still have a fair amount of things to deal with in this crisis. And then still find some time for an epilogue. How a series ends isn’t the most important, but it does leave a lasting impression. They did a nice job handling things with Akko and Chariot which I can appreciate. And I loved seeing Croix flip out over the true form of the Grand Triskelion. Even though she managed to break the seal it didn’t matter so long as she didn’t have the Shiny Rod. Without the full package…it is a stick that unleashes party tricks XD.

Now hopefully everyone gets through the last episode just fine. I expect they will since it would be a hard shift for this show to end on anything but a fairly optimistic note, but you can’t say anything for certain. My fingers are crossed and hoping to be able to write about how we ended strong.