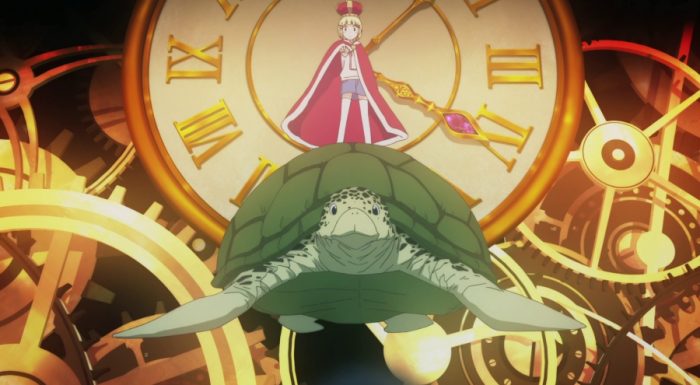 The past two episodes have been dedicated to a similar theme, but a theme that applies to both Sana (aka “The Red Queen”) and Hatori (aka “The Evil Witch”) – essentially it centers around the emotional fallout from when the two of them ran into each other towards the end of episode 8. Hatori spiraled down into some heavy despondency … I wonder if it went as far as self-loathing … which resulted in shutting and closing everyone out of her life “for their own good” (including poor Ayumu). Meanwhile Sana is thinking about “getting back” somehow and in some way against those who scared her so badly and did such a terrible thing to Zouroku and is interestingly trying to take matters into her own hands without really talking to either Sanae or Zouroku himself. Sana’s state seems to be pretty consistently that of being “frazzled”. 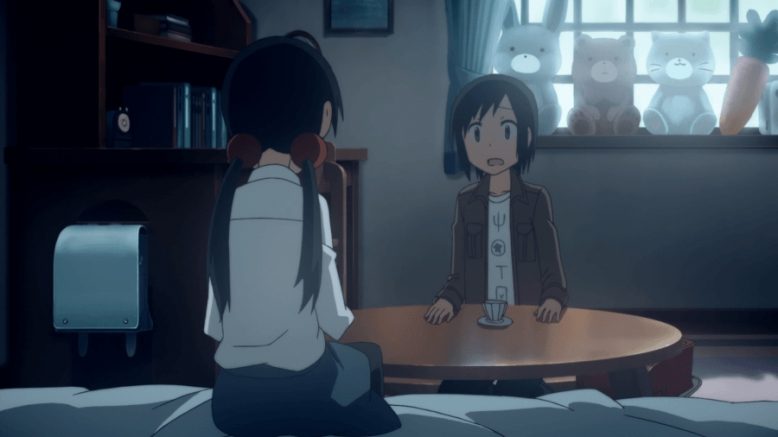 It is Ayumu who really is the one who steps up onto the stage in this arc’s turning point, it seems, specifically in relation to both Sana and Hatori. Not only do these episodes show how the two of them behave in the aftermath of their first meeting, it also shows that they both close themselves off from others around them – Hatori forcibly pushes everyone else away, including friends, family (in an eerie twist she “mind-controls” them into “comfort puppets” so they will “never be sad” -_- ), visitors (Shizuku tries to visit her – apparently the organization she is a part of became aware of her activity somehow), while Sana closes herself off from those she is close to in her attempt to find practical solutions in dealing with this newly arisen threat to those dear to her. While Hatori shuts down in despair Sana freaks out all alone. In both of their cases the one who unexpectedly serves as a catalyst for both of their beginning to sort things out (admittedly in an unideal way) is … Ayumu. 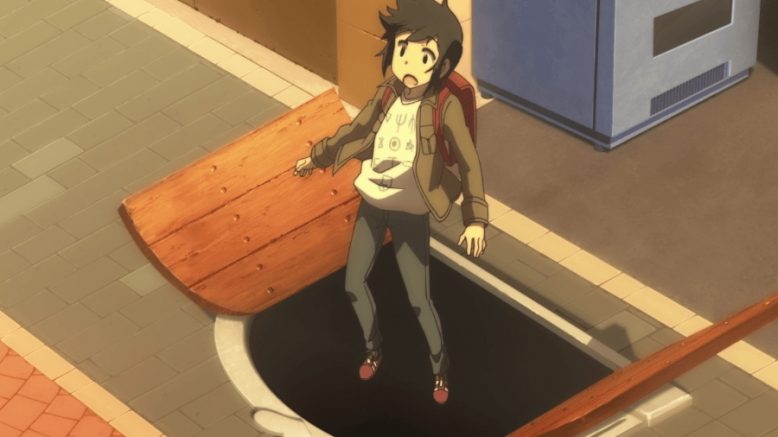 While Ayumu definitely gets the proverbial short end of the stick from Hatori when the latter forcibly ejects her from her life (despite Ayumu’s repeated protesting against her doing so) it turns out to be rather serendipitous as she begins to actively search for the only person who was ever able to stand up to Hatori on her own “terms”, and fortunately Sana was actively searching for Ayumu and Hatori as well, although for quite different reasons. After Sana discovers Ayumu she forcibly kidnaps her (Ayumu seems to not have a lot of luck with Alice users XD ) and brings her into Wonderland where she imprisons her after threatening her, demanding she apologize for “what she did to Zouroku”. When Ayumu readily apologizes in a wholehearted manner poor Sana almost short-circuits … Sana’s ill-equipped ability to deal with emotions and human behavior in general burbles to the surface once again, and even with Ayumu trying to talk out things with her Sana is still not quite able to wrap her mind around how to process the situation with Hatori. 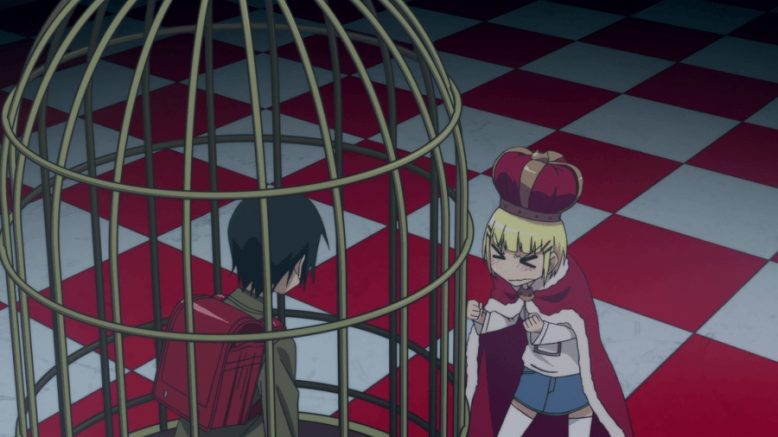 But for whatever reason Sana does seem to agree to try and reach out to Hatori, and does so in a way that seems so easy it makes me shakes my head. (I tell ya, I am still of the opinion that if Sana were emotionally stable she would be more than a match for Hatori – Sana can literally create realms, creatures, teleportation, all sorts of things, and her wellspring of power is huge.) After creating a door to Wonderland in Hatori’s living room (!) Hatori wanders inside and in a moment of to the singing of a slow, sad background song of slightly eerie beauty (really one of the best parts of the series so far for me) she follows after a miniature version of the “March Hare” up some stairs, smiling and behaving like a normal, happy child for a single moment, as if her parents had not fought, as if she had not become a wielder of the Dreams of Alice, as if she had not hidden inside her mind’s cage of despair. I must confess that it was this moment that made my heart go out to Hatori’s plight more powerfully than anything I saw before it, and really drove home the fact that she somehow needs to be “saved” or “rescued” or “helped” in some way. 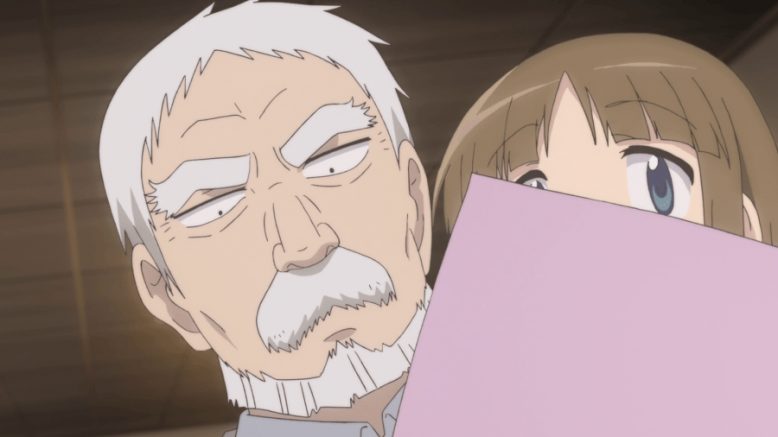 The second meeting between Sana and Hatori also did not go as Sana was expecting it to – Hatori actually agreed with Sana’s accusation that what she did was evil, and was obviously in pain and sad because of it, and something in Sana went out to her, but again, she did not know how to process it. Confusion clashed head to head with despondency, and as the conversation between the two of them proceeded it came out that Ayumu had possibly been interacting with Sana … Hatori suddenly became active and energetic again (although with anger and/or frustration), resulting in attempting to use her using her powers against Sana. The result was a … well … a literal disaster. When their powers again cancelled each other out something happened, and Sana lost control somehow and in some way of … her realm of wonderland itself. And the two of them were trapped inside it. 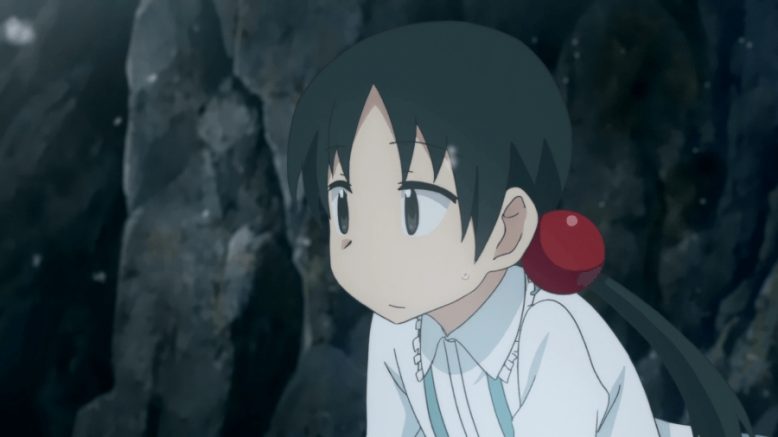 The mere fact that wonderland somehow continued on after Sana “lost control” of it really raised all kinds of questions for me … a lot of interesting speculation regarding the setting of the story itself in general arose, and also wonderings about Sana herself and what her nature actually is, and about the Dreams of Alice abilities in general. After the episode was over and I was pondering it I found myself … quite surprised, yes, but also being reminded once again that we (the viewers) actually know so little about the story and characters proper.

Looking forward to how this arc will begin to resolve itself next week (among other things Zouroku is hoping to make his way to Sana’s side – and if he gets there hopefully his input will be just the thing that Hatori needs to hear), and also hoping we will begin to get some more answers trickled out to us. ^^