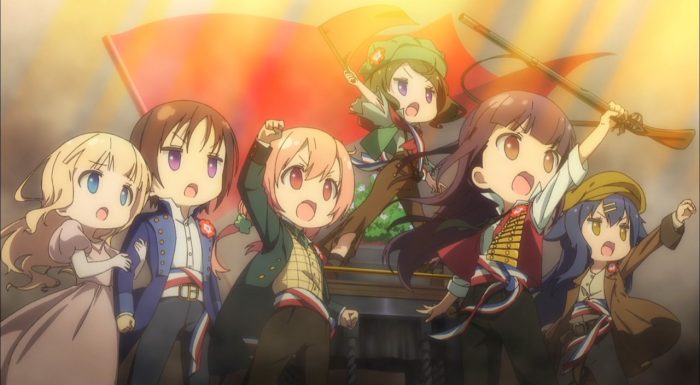 And at last, as we head into what will probably be the final arc of the series, the theater troupe that was first conceived in episode one finally begins the planning stages of actually putting on a performance. Not that I necessarily have the right to talk about other people procrastinating or anything (I’m going to anyway, though), but for a group that raised such high ideals as performing on a popular stage in one of Tokyo’s major theater districts, the fact that they didn’t do anything with the troupe until Hinako suddenly had the urgent need to show her mother that she was actually acting doesn’t really bode well for their professional future. 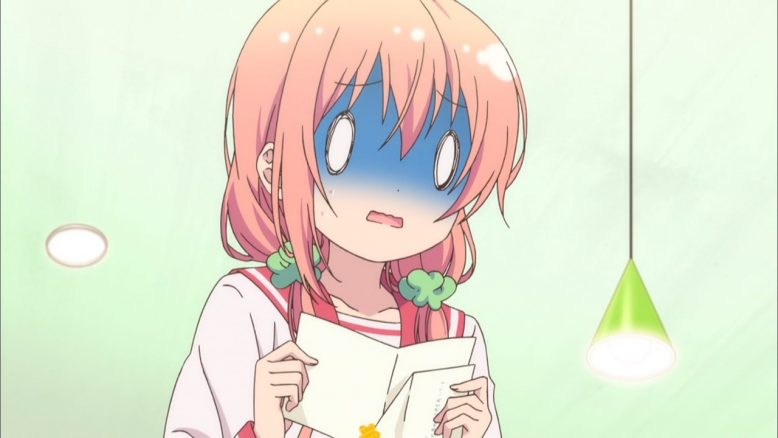 It’s interesting that Hinako has yet to explain to anyone her actual reason for suddenly deciding to have the troupe perform. It looks like right now everyone thinks she’s simply been wanting to put on a performance and has seized this event as a good excuse to have one. Well, everyone except Kuina, who thinks she’s in it for the free rice prize. I think Kuu-chan is projecting a bit in that analysis. 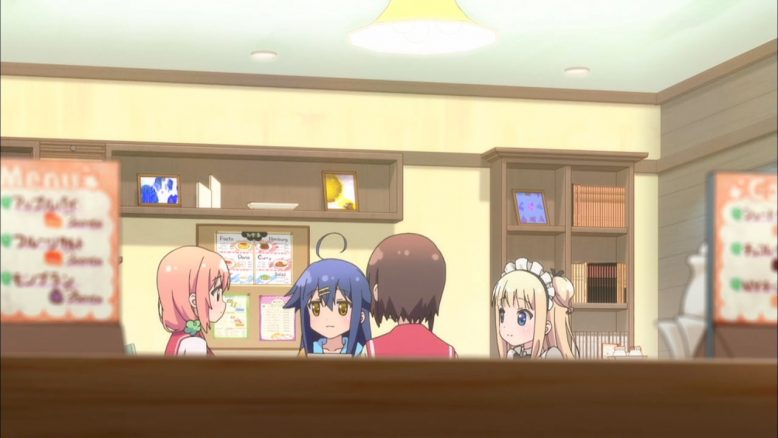 Of course, once Yua hears of this things really get set in motion. For better or for worse, Yua is a powerful force for action. Where the other girls take a more laid-back attitude towards things, Yua has a fiery determination to accomplish whatever task she sets out on. In this case that gains the group the right to use a school classroom to practice in, and ends up catching Ruriko’s attention in the staff office, where she proposes the idea of having a training camp. Although she pretty clearly has ulterior motives. I would guess that Ruriko has never had much of a chance to play around with other children her age, so the chance to do a sleepover-type event is clearly irresistible to her. 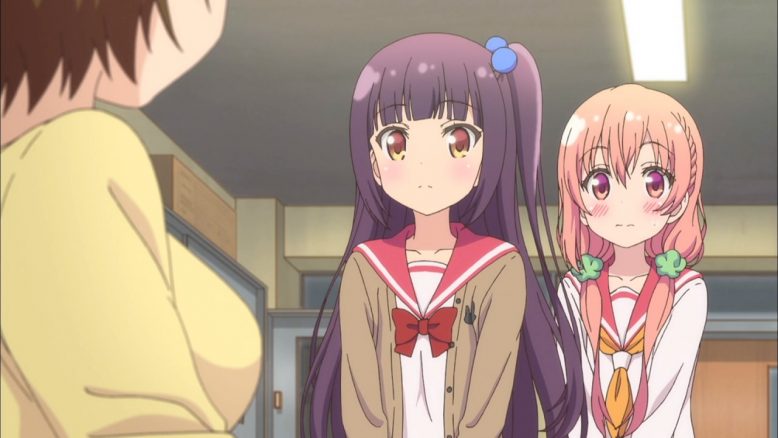 Now, I was expecting Kuu-chan to have a whole bunch of food in her bag. And, I suppose, from her perspective, she does. Books, however, should not be food. For people with normal digestive systems, it is not healthy to eat large amounts of paper, and especially ink. But since everything Kuu eats just passes right through the rift in her belly into the endless void, I suppose it can’t harm her. Still, please don’t eat books. Mayu-chan apparently used up all her luggage space for a giant stuffed animal (Hinako’s isn’t quite so big compared to her bag, so she may have room for other stuff in there as well), while Yua apparently just brought skin care and beautification products. I worry about these girls if they ever have to pack for a real trip somewhere… 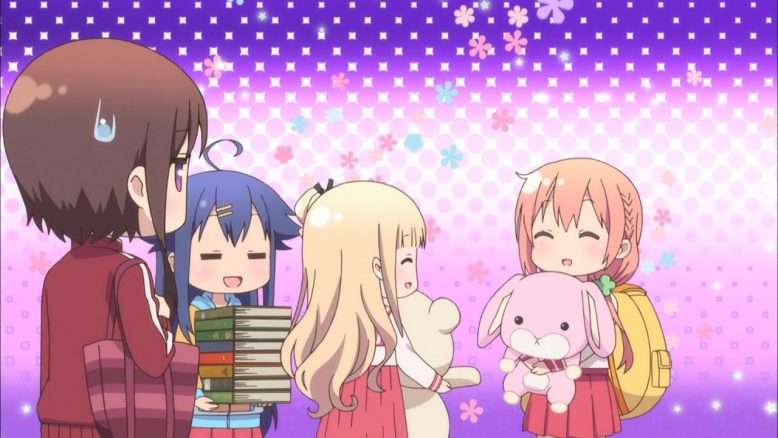 After some long and hard practice at school, during which the weather outside turns from bright and sunny to dark and rainy, the girls call it a day for their training camp, and Yua heads out of the room to wash her face and calm her heart from being complimented by Chiaki. And in the process she discovers the downside of having a training camp like this at school when no one else is around. Most of the lights are off outside of the area where the girls are practicing, and with the rain and the clouds the hallway looks a lot darker and more foreboding than it does in the sunlight. Fear of darkness is a primal fear: one of those fears we are born with, and I don’t blame anyone for having trouble with it, especially when it feels like they’ve walked into a setting from a horror movie. With the rain, the dark hallway, the broken light above the sink just occasionally flickering on for an instant but mostly just giving a sort of sullen yellow glow that illuminates nothing… Pop culture would tell us it’s the perfect setting for something terrible to happen to a lone girl who carelessly wanders away from her friends into that area. Even if you try to laugh at yourself  because that’s all just fiction, still the thoughts would lurk there in your mind. No, I don’t blame Yua at all for being jumpy. 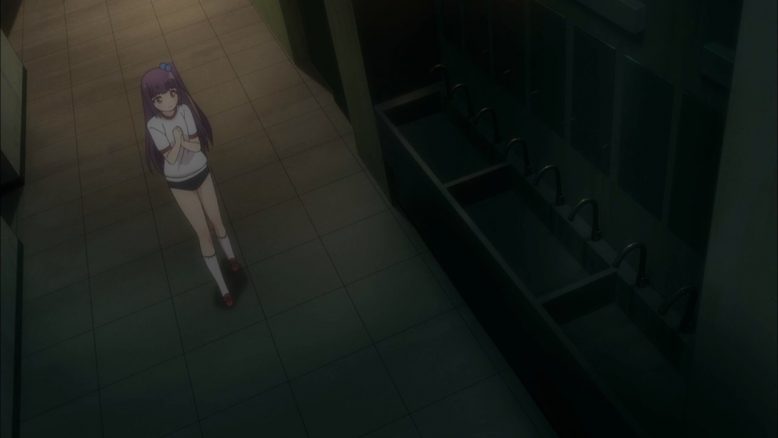 However, her habit of volunteering for anything assigned to Hinako trips her up yet again, and after dinner she and Hinako end up back out in the hallway again, this time after it’s truly dark. Yua’s pride is definitely hurting her here: I doubt most of the girls would judge her much for being afraid of the dark, so if she’d just said something she probably wouldn’t have ended up there. But because she didn’t things turn out like this and she ends up being left alone in a dark hallway (with appropriate ominous flashes of lightning) when Hinako runs off to catch a stray cat that wandered into the school. Poor girl. 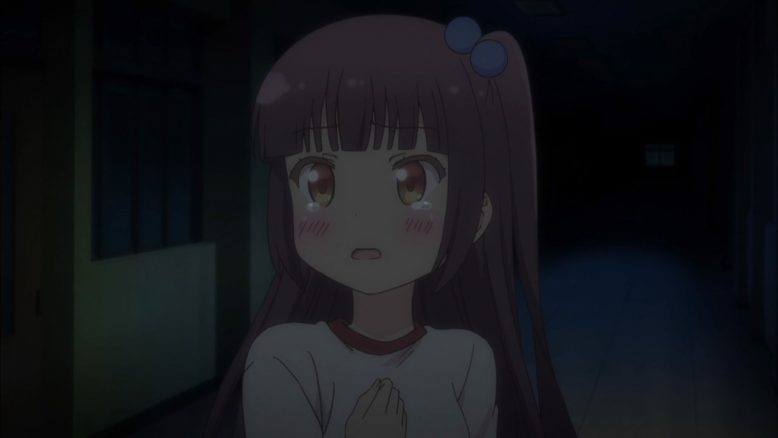 So when all is said and done Kuu-chan has some ideas now for her script for the upcoming play, and the girls did get some practice in. I would counsel Kuu-chan that it’s not always a good idea to write stories about your friends: sometimes people don’t like to see themselves through someone else’s eyes. I expect this story about the girls preparing and performing a play for Hinako’s mother’s visit will take up the remaining episodes in the series, although I’ve become resigned to the fact that they aren’t going to give us the sort of detailed look into theater life that I would have liked to have had. Still, it’s enjoyable enough as it is, and I look forward to seeing how it turns out as we head into the final stretch.