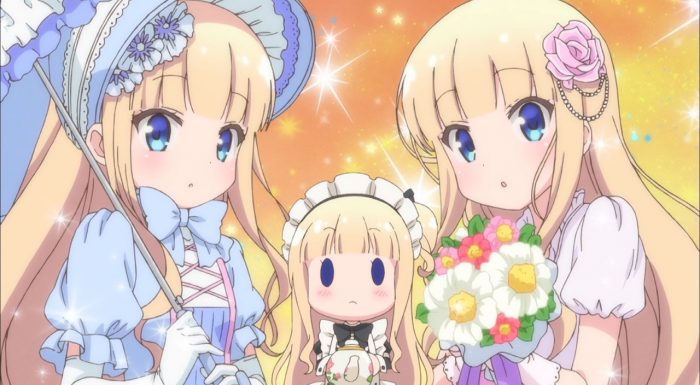 One thing we can say for sure by now is that Hinako’s competence fluctuates depending on rule of funny. If the joke of the scene requires her to be hilariously incompetent and/or socially awkward, then she will scarecrow up at the first sight of people, trip over thin air, spill things, forget stuff, get lost, put DVDs into VHS players, and who knows what else. But if the author decides he doesn’t want to make a joke about how incapable she is, suddenly she can accomplish remarkable things, like pulling an ace job in the theater club’s play. While it’s all cute and sometimes amusing, it makes her character progression rather hard to keep track of. 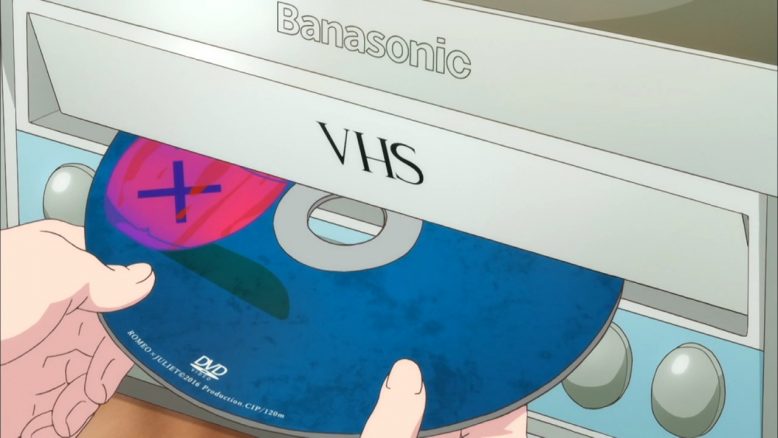 The first half of this episode was definitely one where the author had decided to pick on Hinako. From freezing the instant the doors to the shop opened regardless of who was coming through, to tripping over nothing and spilling cream on Yua, Hina-chan could not do anything right. Well, unless you consider getting Yua to dress up in that lolita-style outfit to be part of Hinako’s plan, in which case good job Hina-chan! Not that any of these girls ever look bad, but they all look especially good when they dress up fancy. But of course Hinako returned to form by the end of the day with her attempt to play a DVD in a VCR. I suspect that would scratch the disc, if nothing else. I wouldn’t advise trying it. 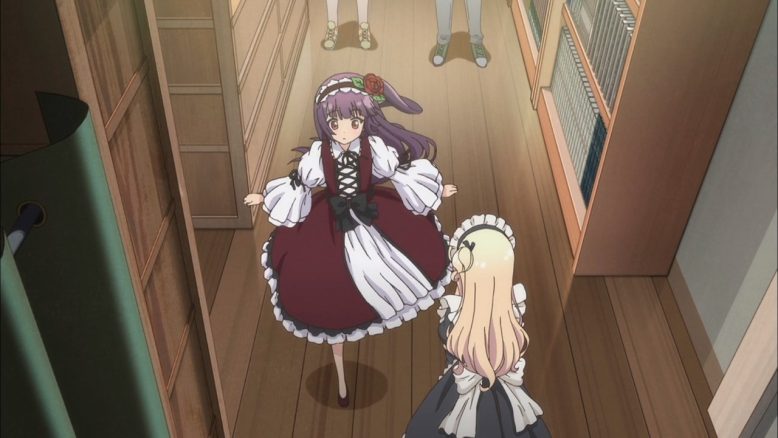 And then in the next scene, on a different day, Hinako is able to greet customers and take orders with only a slight stutter. She seems like a different person from the girl who was panicking so badly just a little while ago. Although I suppose we could blame that on her cold… With the infamous, debilitating Japanese cold striking Hinako down right when she finishes taking someone’s order, she’s forced to set aside work and rest for the remainder of the day. I do have to wonder how people in anime and manga ever get anything done if they faint from such a small fever, though. Just half a degree above normal Celsius, and only 0.9 degrees above normal Fahrenheit, it isn’t exactly a killing fever. You’re not going to feel good, sure, but my experience tells me that it shouldn’t become incapacitating until the fever climbs notably higher. But never mind that, I’m just nitpicking. 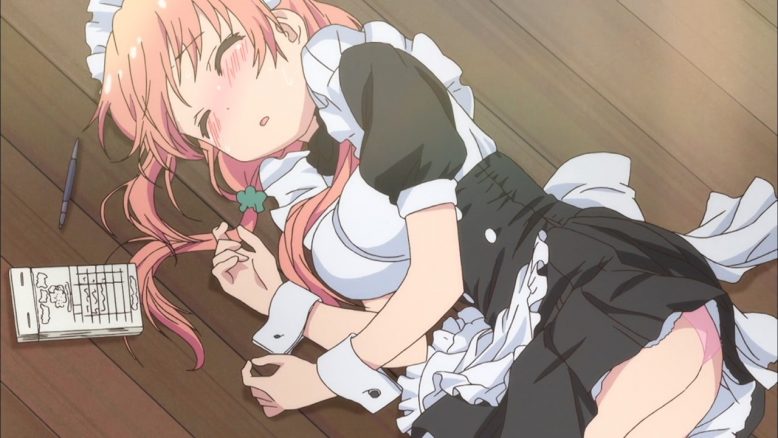 It’s cute the way Hinako’s friends rally around her when she falls ill, although Kuina and Yua definitely have a bad case of good intentions getting carried overboard. You’d think those two had never had a cold before in their lives, seeing all their crazy attempts to come up with instant cures, but it’s worth a laugh seeing them attempt each one and then get dragged out by Chiaki. Generally the best cures are just to have plenty to drink (water and sometimes various herbal teas for soothing a sore throat), some nutritious food that is easy to swallow, and plenty of rest. 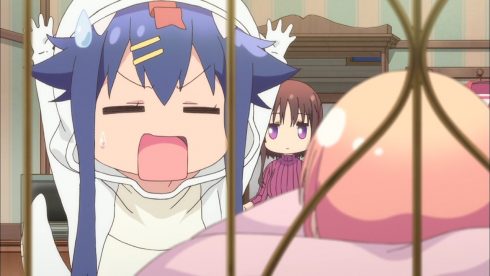 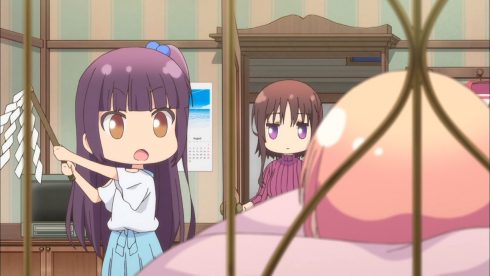 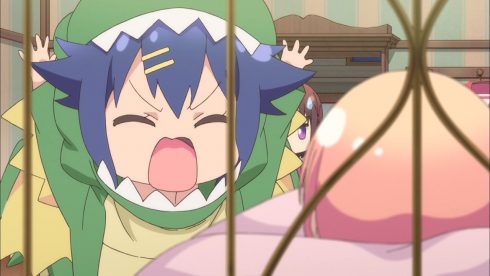 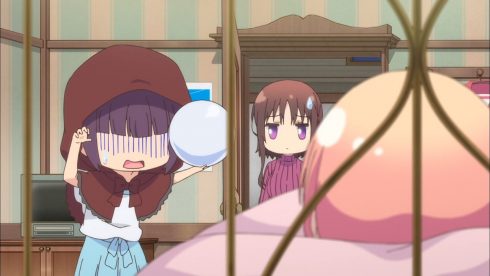 I do feel for Hinako with her bout of homesickness. Being sick can often break a person down emotionally as well as physically, and feelings that they may not even notice on an ordinary day can seem much more significant. And really Hinako is far from home, and has been for a few months now. It’s quite a thing to live away from your family and everything you’ve ever known, especially if you haven’t done anything like that before. Now that she’s sick a sense of loneliness creeps over her and she longs for comfort and love in a familiar setting. I would like to think that a good parent would be able to talk to her over the phone and help her through her homesickness without insisting that she give up and come home, but we haven’t seen enough of Hinako’s mother for me to really know if she’d do things that way or the way Hinako is afraid she would. 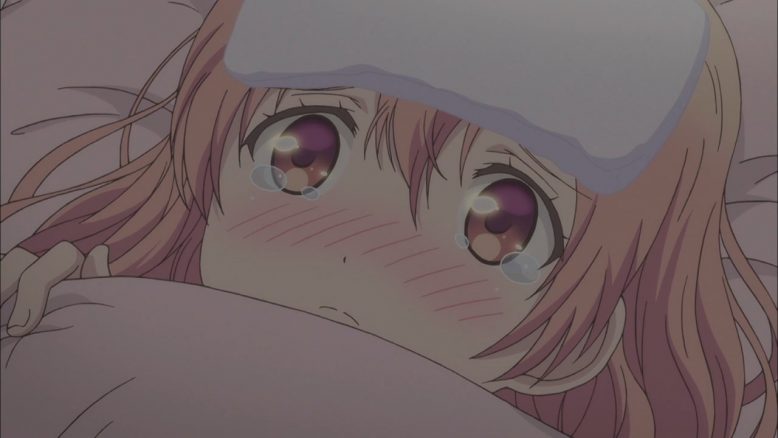 Fortunately, the other girls don’t let her wallow in depression for too long. Mayu-chan gathered everyone to help make some rice porridge for her, and their arrival with it quickly brings a smile back to Hinako’s face. After all, the truth is that she’s not alone there in Tokyo. Even though she’s away from her family, she has friends who care about her as if she were family. They all look after each other and support each other. And so, even though Hinako may miss the place she grew up, she doesn’t have to feel alone. 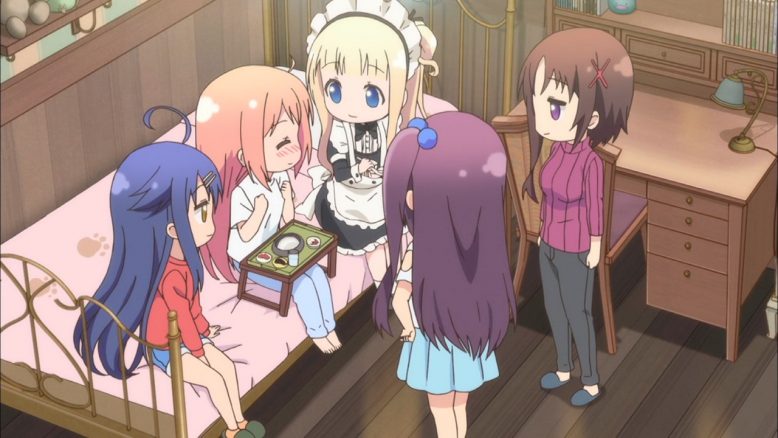 Another cute episode with some amusing moments. As I said above, I particularly liked the Kuu-chan and Yua silliness around Hinako’s condition. Still, there is something about this series that’s bugging me. We’re two-thirds of the way through it, and these girls haven’t done anything with the Hitotose Theater Troupe that they talked about starting all the way back in episode 1. It’s gone absolutely nowhere. I really hope they get it off the ground and start getting some performances in before the series comes to an end. 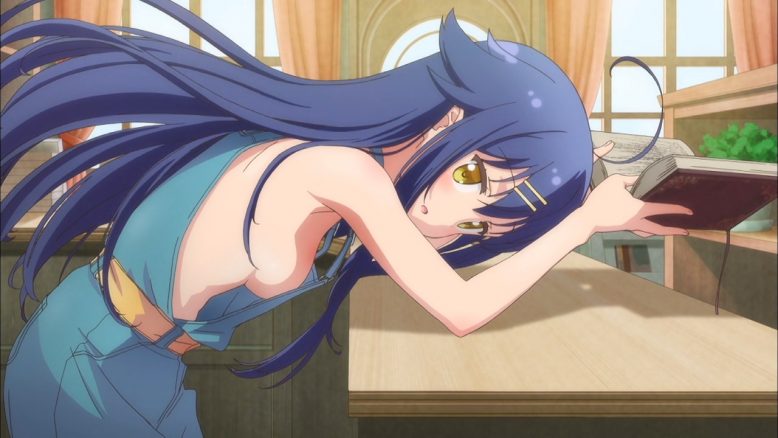 They’ve definitely got some… interesting endcards for this series.