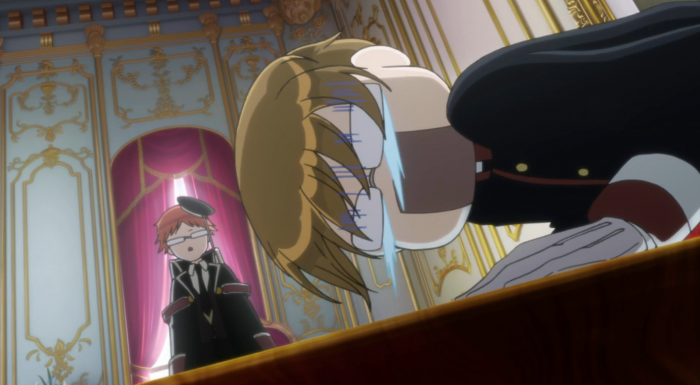 At long last, an entire episode dedicated to resident puppy dog and Character I Identify Way Too Closely With: Bruno! I liked “The Whereabouts of a Dream,” but I think I liked it more in retrospect than while I was watching it. There are some great ideas about perspective and self-worth in here, the episode absolutely nails what it’s like to be a perfectionist overachiever, and its message about pursuing “unrealistic” dreams Fills Me With Determination, but the execution was just a little bit off from what I’ve come to expect.

In terms of production, there’s a lot of static frames and some off-model designs, and the internal-focused conflict grants the episode a kind of subdued thoughtfulness that seems out-of-place compared to our usual high-energy, gag-filled, chibi-packed antics. It’s a bit unbalanced, I suppose, struggling to mix the serious with the silly as deftly as usual. It’s not that it’s a bad episode–it’s emotionally honest and touches on a lot of great ideas–but it doesn’t quite feel like an episode of The Royal Tutor, I s’pose. 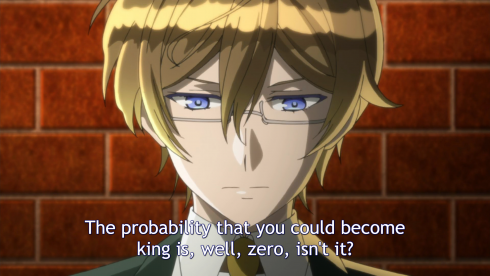 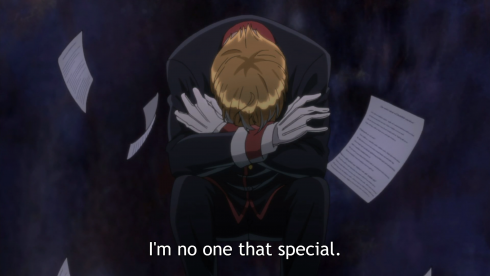 That said, the concepts and characters at the heart of this one got me real good. Bruno is every talented person who has never been the most talented person: the student who’s summa cum laude but not valedictorian, the actor with all the Oscar nominations and none of the wins, the basketball player who starts every game but is never the leading scorer. Winning a bronze medal is often more satisfying than winning a silver. With a bronze, it’s easier to see the long line of people who aren’t on the podium, and to appreciate the work you did to stand there. With a silver, all you can think about is what you could’ve done to earn gold.

When you come that close and still fall short, it’s easy to forget about your skills and instead focus on your shortcomings, or to stop measuring your progress by your own accomplishments and start measuring it by someone else’s. This is doubly true if you feel like you worked your tail off and someone else surpassed you without even breaking sweat. (Odds are that other person worked their tail off too, of course, but that’s often not the way it looks or feels to the person in second place.) To most people, you’re “distinguished.” But to yourself, you’re “no one special” at all.

The knowledge that you’re “pretty good” but never “the best” can eat at you, wear away your confidence until you stop feeling like you’re talented at all. Until you start to wonder if there’s even any point in trying, since there will always be someone who has more natural ability and can do it better than you ever could, no matter how hard you work or practice or study. “If there is such a thing as geniuses,” Bruno wonders, “will any of my effort actually mean anything?”

Er, I did mention that I identify way too closely with Bruno, didn’t I? 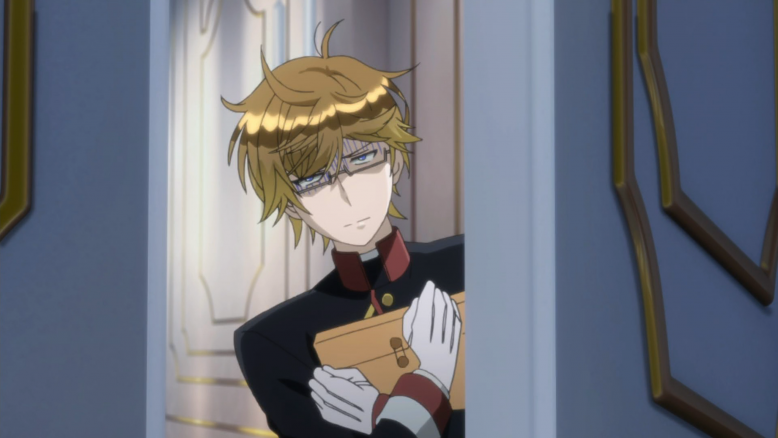 This episode takes Bruno’s core character and his plight and does a few really smart things with it. First, rather quietly, it uses Leo’s and Bruno’s competing viewpoints to point out the importance of perspective, and how terms like “genius” and “special” are relative and mostly meaningless. The audience has seen how hard both Leo and Bruno have worked to get to this point, yet both boys see the other as a natural “genius”–Bruno because he can more easily absorb knowledge, and Leo because he can more easily come up with creative solutions.

When observing others, it’s easier to see the destination but not the journey; when looking at ourselves, it’s easier to see the journey (and stumbles along the way) but not the destination. So Leo believes he’s stupid, and Bruno believes he’s ordinary, and both believe that the other is super-special-awesome, and the audience knows that none of that is true, not really. So maybe they (and we) should stop measuring ourselves solely by our weaknesses and others solely by their strengths, and try finding a middle ground between the two instead. 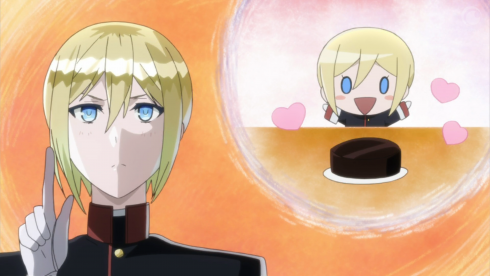 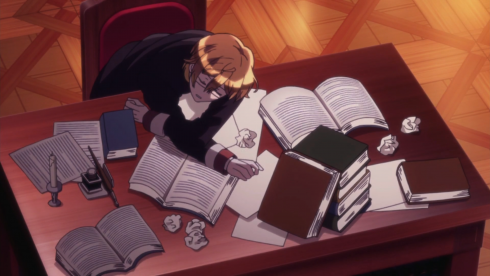 At the same time, while The Royal Tutor does want Bruno to have more confidence in himself–and slowly shifts him in that direction when he decides to use the knowledge of his own “setbacks” as a source of strength and pursue his “unrealistic” dream–the series isn’t arguing for Bruno to become a roaring mountain of narcissism either. His lack of pride is in many ways one of his best qualities, as his belief that he has to work twice as hard as everyone else just to keep up with them (the same belief Leo has, incidentally) is a large part of why he’s managed to distinguish himself within the academic community.

It also makes Bruno a worthy candidate to rule the kingdom. His tendency to downplay his own talents means he’s more aware of the external factors that have helped him here. Sometimes that comes out as “I’m not smart, I just work hard,” while other times it comes out as “I’m not special, I just happen to have been born a prince.” And he ain’t wrong, either! Bruno knows full well how much of an advantage his position affords him, both in terms of resources and public respect. And he knows that if he wasn’t a prince, it’s unlikely anyone would be paying attention to him. This only makes him more determined to work hard, so he can (1) confidently say he’s actually earned that respect, and (2) use his position to benefit the country at large. 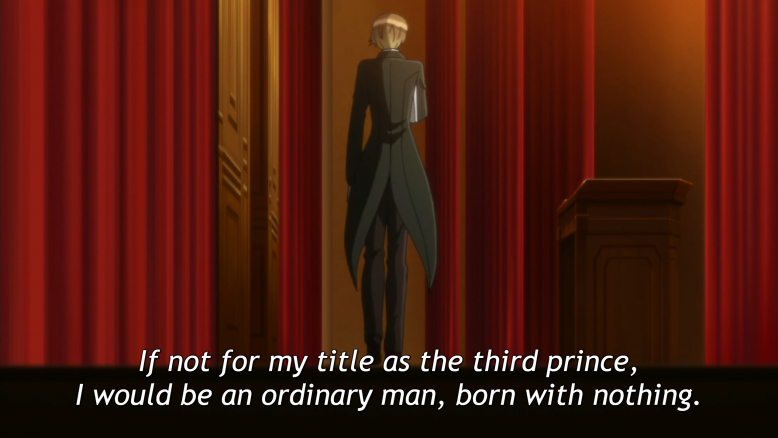 Bruno’s arc is as much about self-confidence as it is about self-awareness, and about finding a place between what you “should” do and what you “want” to do. Bruno’s a responsible kid, and a considerate one, too. He doesn’t want to cause problems or hurt others, as demonstrated when he almost headdesks himself into an early grave for “making his master worry” or when he frantically assures Heine that he’ll always be his master, no matter how many university professors advise him along the way. (Bruno’s nerd-crush on Heine continues to be The Cutest Thing, by the way.)

That sense of responsibility is important and good, and not something he should discard completely. But it also almost causes him to give up on something he’s dreamed of since childhood, for the sake of “realism” and a vague sense that becoming a scholar might be “better for the kingdom.” Finding the happy medium between responsibility and personal desire, between “should” and “want,” is a vital part of growing up, and something I don’t think anyone ever fully figures out or gets right 100% of the time. But, as Heine notes, any version of the future that involves giving up entirely on his dreams is almost certainly one Bruno will regret. So maybe it’s okay to be a little selfish this time. 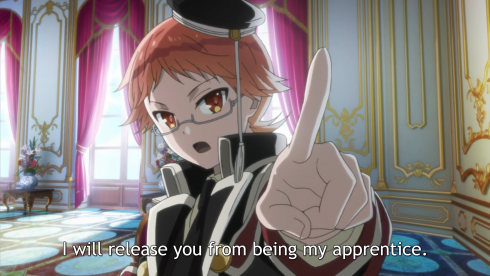 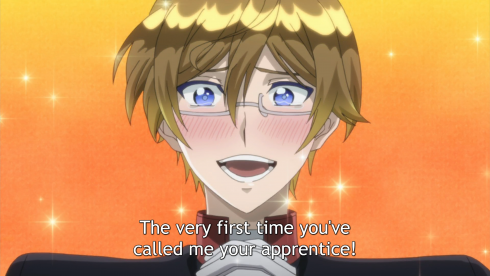 Bruno’s story is the centerpiece of this episode, of course, but we also take some strides in terms of advancing our overarching plot, too. Dr. Dmitri’s invitation, it turns out, was orchestrated by resident Big Bad Count Ernst Rosenberg, and give the guy credit: It was a pretty solid scheme, the proverbial “catching more flies with honey than vinegar” by offering Bruno a tempting alternative path rather than trying to “destroy” him with fabricated scandals (or–gasp!–physical violence). Not to mention that Rosenberg’s failure doesn’t actually hurt his status in court, since he just looks like a helpful retainer who arranged an opportunity he thought Bruno would appreciate.

Speaking of that status, we learn this week that Rosenberg is First Prince Eins’ high steward, and hey, look! we have our motive. Apparently King Vicky hasn’t named an official heir, so while it’s assumed that Eins will take the throne, it’s not set in stone yet. If the younger princes start to flourish under Heine’s tutelage, one of them could end up supplanting their big brother. (Although politically speaking, this would be an immensely stupid move on Viktor’s part unless Eins were just straight-up incompetent, which doesn’t seem to be the case.) Since Rosenberg is connected to Eins, it’s clearly in his best interest to see his boss take the throne–and that sure would be easier if there was less competition… 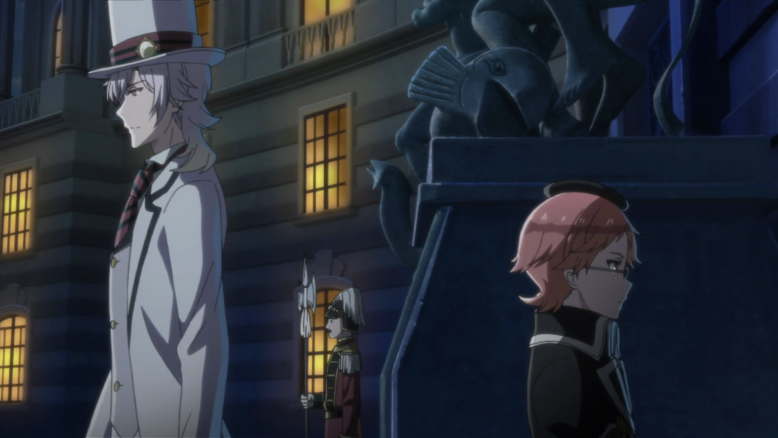 {Insert Theme from “The Good, The Bad, and the Ugly”}

Unfortunately for Mr. Steward, his plans keep encouraging the princes to work harder to become worthy heirs (womp womp), so it’s time to change tactics. Rather than take out the boys, he’s decided to take out their advice-giving, lesson-slinging, dog-walking(?) tutor. Will Heine’s buried past come to light? I’m curious to see how this all shakes out–just as long as it doesn’t interrupt the adorable trip to the zoo we’ve been promised in the episode previews, anyway. My chibi tank is low after this episode. I need to refill it before the plot kicks into gear again.