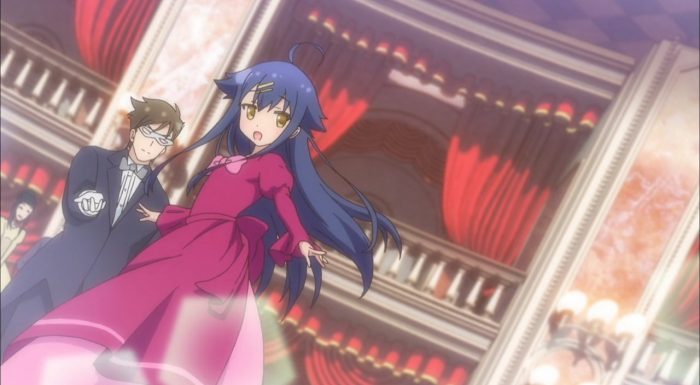 As noted last week, the theater club’s advisor has returned. However, as we might have expected, there is more to her than meets the eye. But what, exactly, that “more” is may not have been what we were anticipating. 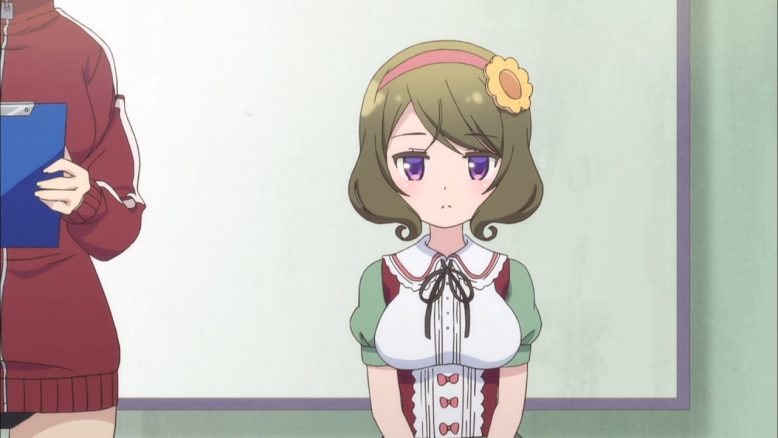 This has actually caused some controversy among viewers, so let me talk about it first. We’ve all already noted that the advisor, Kuroyanagi Ruriko, is a tiny girl: a foot or more shorter than the high school girls she’s in charge of. We thought that just meant she was a comically short adult. What we learn in this episode is that she actually is the right age for her height: she is a 9-year-old child prodigy. But what bothers a number of viewers is that this nine-year old, despite looking like a nine-year-old in almost every way, is, in a word, busty. Her breasts are very clearly those of an adult, despite the fact that no other part of her has grown, which has caused a number of people to raise questions about sexualization of children. I don’t happen to think that’s necessarily the angle the author was trying to go for, but I have to say that their approach with Ruriko is probably not the most fortunate one. 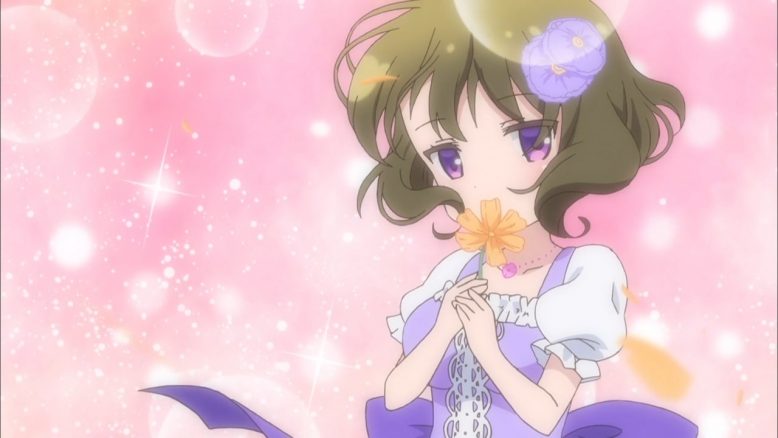 Sometimes children can physically mature early. Anyone who has watched Non Non Biyori should remember Hotaru, who is around 10 or 11, but who had blossomed early and looks like she’s in her mid-to-late teens (heck, with the right clothes and makeup she could pass for an adult). Generally speaking, as I understand it, it should mostly occur as it did for Hotaru: meaning an early bloomer shouldn’t just have D-cup breasts, but rather their whole body should grow relatively proportionately so that they’ll look more adult to go with their new adult assets. I don’t plan to get into biology here, and I know exact timing on this stuff isn’t always so precise, but I think that’s fair enough to say: Ruriko’s breasts normally shouldn’t have grown that much before the rest of her started to grow and catch up. I would expect her to quickly grow as tall as the girls she’s in charge of, if she really is in that stage of her development, but I rather suspect she’s going to remain an oppai-loli throughout the entire series, if for no other reason than because that’s her established character design. Hopefully the author is wise enough to keep her out of any notable fanservice situations, because her presence is volatile enough in and of itself. 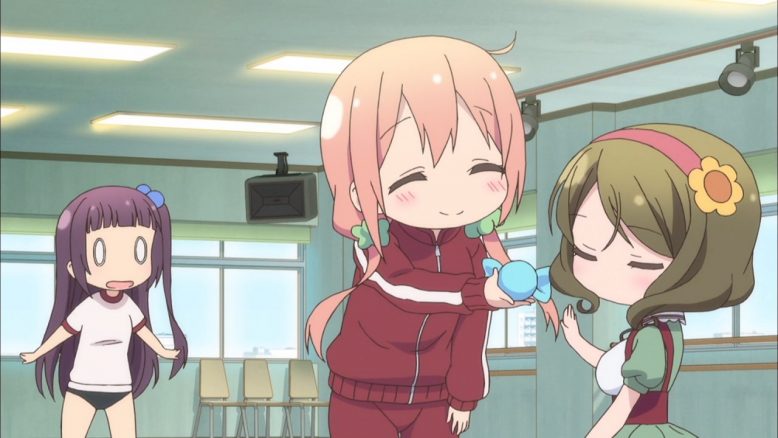 Putting that aside, adventures in the theater club continue. Mayuki comes by the club to see how Hinako is doing, but the answer, unfortunately, is not very well at all. Even though she can perform the exercises and such on her own, the number of people in the club room makes her too nervous to do anything other than freeze up. After a slight misstep with the advice about vegetables, Mayuki manages to unintentionally demonstrate a technique that may be effective for Hinako in the short term. Not the dancing (although I wasn’t expecting Mayu-chan to be able to dance like that) but rather focusing so much on what you’re doing that you forget there is anyone around you. If Hinako can immerse herself so thoroughly in her part that she no longer is aware of the audience, she won’t get nervous. 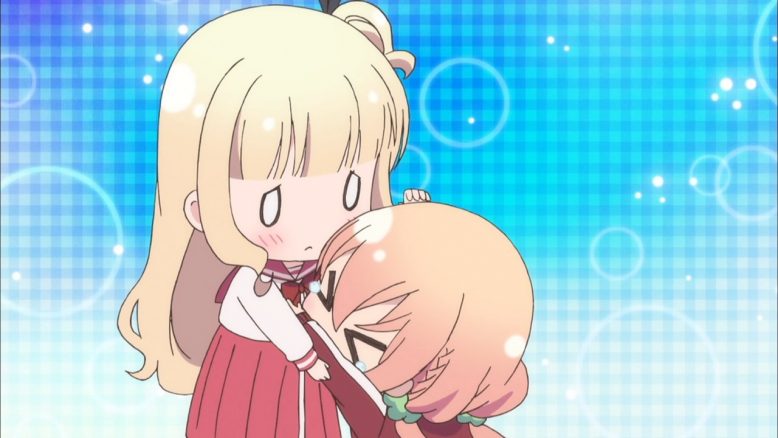 I think this is borne out in a couple of ways as the episode goes on. First, and probably most important, is the song that Ruriko brings to practice. It’s clear right from the beginning that Hinako strongly connects to the music. More than anything the club has been doing to this point, the music captures her attention, and when Ruriko asks her to sing it Hinako not only does so beautifully, but sings in a way that make it clear that she isn’t really seeing any of the many club members she’s singing in front of. To her there is only the music and her joy in singing it. The people around her just cease to exist in those moments, until the song ends, she takes a breath, and suddenly everyone applauds, snapping her back to herself. It is a powerful performance, and if she could get herself into that state of mind at other times she would be able to accomplish a great many things in the theater. 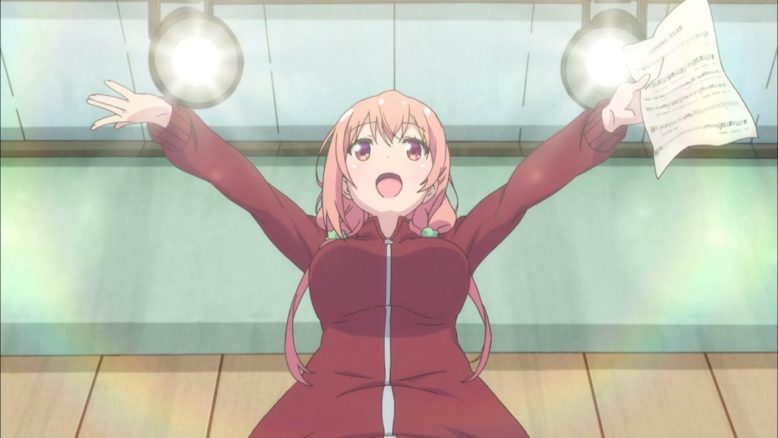 The second situation that I think supports this case is less significant, but it makes its point by working from the opposite end, so to speak. After Hinako ends up being placed in the role of heroine for the play, the girls attempt to help her work through it by having a practice there at home with just the four of them. However, they make the mistake of telling her to “pretend it’s the real thing.” Hinako immediately gets freaked out, imagining all the people who would be watching her at the real performance, and freezes up. While that doesn’t sound like a good thing, it does show that her problem is psychologically triggered. If she can work herself into that state when no one is watching, then logically it should be possible for her to keep herself out of that state when people are watching. I do, of course, realize that this is absolutely a case of “easier said than done.” But at least the signs are here to show it should be possible. 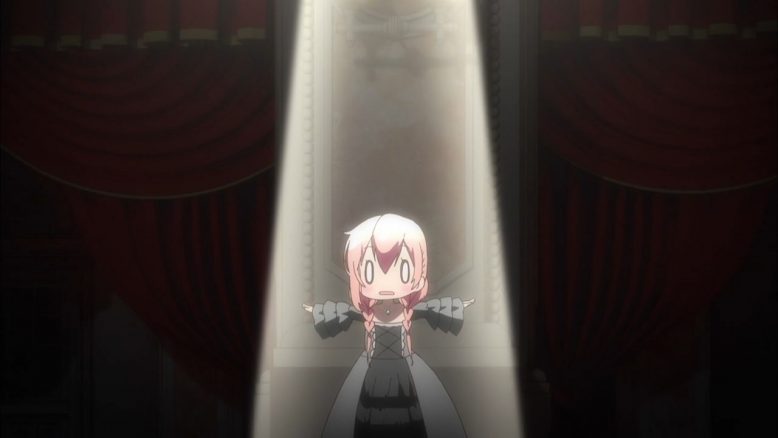 One thing I haven’t touched on yet is the segment with Mayuki and her issues with feeling abandoned by Chiaki. Certainly Chiaki seems exceptionally good at capturing the hearts of the various girls around her, so from one perspective Mayuki could be seen as just another member of the harem. But on the other hand, given that they’re both second-year students while everyone else is first year, the two of them have known each other longer than any of the other girls. There’s an already-established close friendship between them, so when Chiaki treats a theater event as more important than spending time with Mayuki, it’s understandable that it can hurt. Not that I blame Chiaki for sticking to her plans. It’s cool if a friend will change their plans in order to hang out with you, but an important part of friendship is recognizing that you shouldn’t expect or demand that sort of thing all the time. You should respect your friend’s desires as well as your own. Of course, Mayuki and Chiaki aren’t so much about learning life lessons today as they are about just being friends, and a little ice cream brought home as a present soothes a great many tempers. 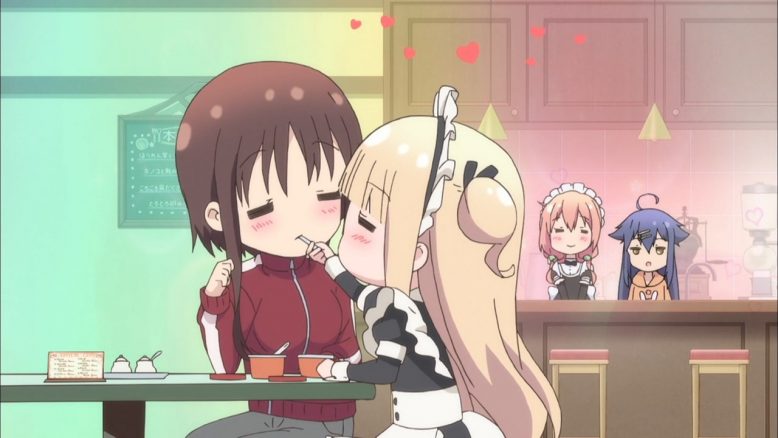 So, the girls are off and running, so to speak. Ruriko has conned poor Hinako into becoming the heroine for the upcoming play in a month, but is she really going to be up for it? They should make sure to have an understudy ready. Poor Yua didn’t handle having her hopes for the part handed off to Hinako all that well either, and I am a bit worried about what she might try to do about it. She isn’t wrong that Hinako is a complete newbie, who is about as far from traditional heroine standards as it gets. There are a number of potential worries for the future, and I’m looking forward to seeing how this will all turn out. 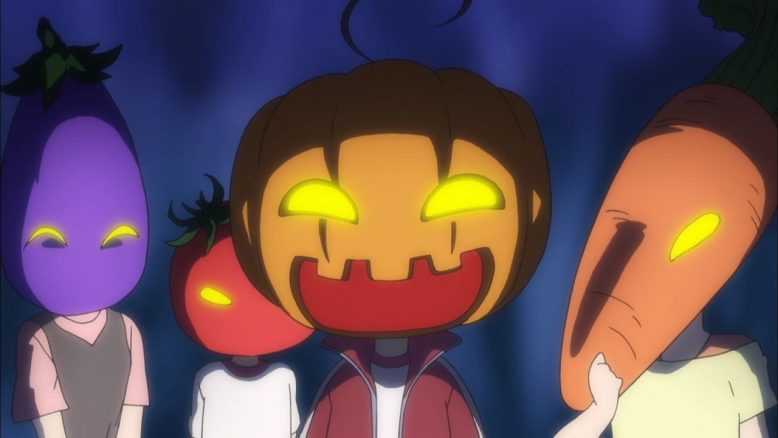