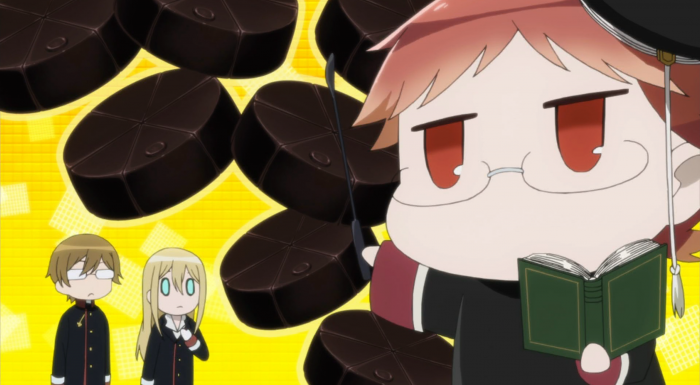 The King of Glanzreich (a.k.a. Viktor) (a.k.a. The God of War) (a.k.a. Dad) returns to the palace to check up on his boys, but our Proud Papa isn’t all teary eyes and hair ruffles. He’s not just here as a father, but as a king appraising his heirs–and a certain someone’s abysmal test score has put him right in the cross hairs. Now poor Leo has to go from 0 to 60 points in three days or lose his right to the throne. Even worse: His dad is going to be Very Disappointed in him.

“Assailed by the Greatest of Trials” is in many ways a direct sequel to “You Don’t Need to Accept Me,” building on Leo’s studying woes, his teacher trust issues, and the slow bond he’s forming with Heine. It even features a cute callback to Leo tentatively taking Heine’s hand. I’m a little surprised to get another Leo episode given he’s been the focus of about three-quarters of the series so far, but then, maybe that’s because of what Heine said this week (and I mentioned last time): he also has the greatest room for growth. Not knowing something is just one more opportunity to learn something new, after all. 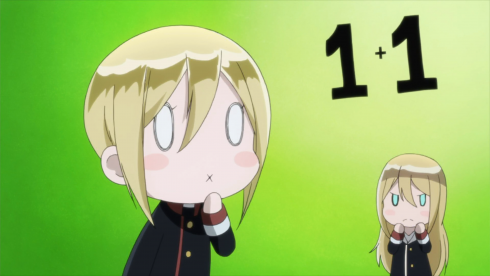 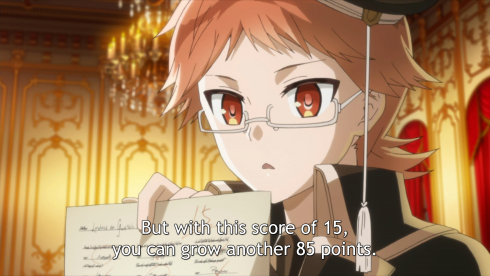 I’ll spend most of this post talking about Leo, Heine, and King Viktor, but I do wanna give a quick shout-out to our other boys, who, despite their squabbles, don’t hesitate to band together and help Leo meet his father’s challenge. They’re not very good at it, mind you, but as we learned last week, it’s the thought that counts. Their attempts to find a study method for Leo aren’t just great for giggles (the group reaction shots alone are priceless), but show us how far along each is in his growth, as well as solidifies some of the relationships between the brothers.

Licht can still really only relate to others through his own interests, so his sole (unhelpful) suggestion is that Leo write formulas on bosoms; as a result, he spends most of the episode as a cheering squad rather than an active participant. Despite his own smarts, Bruno’s lack of confidence means he’s reluctant to teach until his “master” explicitly encourages him to do so, but Leo admires him too much to actually pay attention to what he’s saying. And, unsurprisingly, Kai comes the closest to the correct answer–“mixing business with pleasure,” in essence–but he doesn’t think creatively enough, considering only Leo’s interest in athletics rather than his love of sachertorte. They’re support is important, but they’re no Heine Wittgenstein. 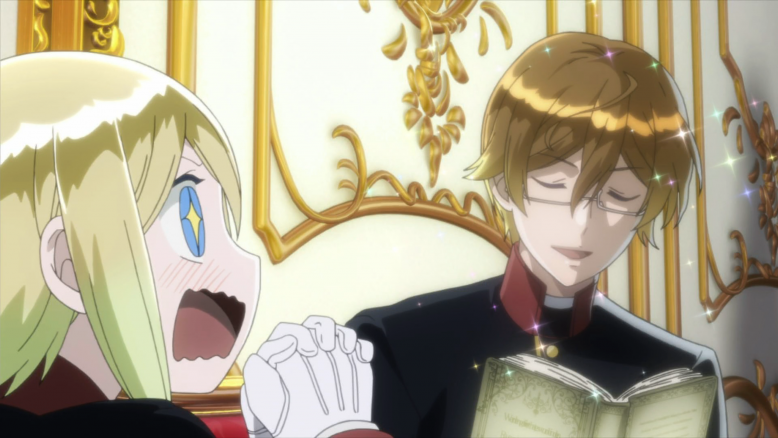 When it comes to Heine and Leo’s three-day cram session, this week performs a smart balancing act between comedy and plausibility, which makes Leo’s speedy improvement impressive without feeling impossible. Heine is a dedicated teacher and Leo is a determined student, but this isn’t a matter of Leo secretly being a genius or Heine having a magic wand that stuffs knowledge into his pupils’ heads.

As ridiculous as it is that Leo struggles to add 1+1 (how?!), Heine’s sachertore experiment proves that Leo actually does know basic arithmetic. He isn’t completely uneducated or unable to learn; it’s just that the thought of having to study and answer questions on the spot stresses him out so badly that he panics and draws a blank. And then he feels so awful about it that he crawls into a Doom Corner and gives up completely. But when Leo is thinking about something other than academics–especially delicious desserts–he’s able to avoid those mental blocks and manage all right. 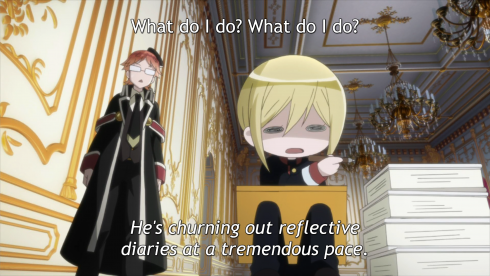 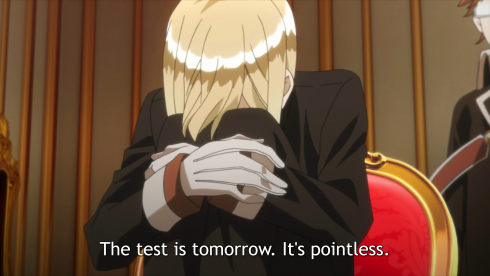 Heine’s challenge isn’t that he has to teach Leo 60 questions’ worth of information in three days, but that he has to help Leo with his test anxiety (and tendency towards defeatism) so he can retrieve those answers out of his head when the time comes. And Leo’s challenge is as much about accumulating knowledge as it is about overcoming his aversion to teachers and studying. That Heine is able to recognize all this and find a teaching method that works for his student is far more important than how much trivia he can shove between Leo’s ears in three days.

Mind you, I don’t want to minimize how remarkable it is that Leo passes his father’s test, because 60 points in three days is a big damn deal and the kid should be proud of himself. But I do want to make it clear that this isn’t an academic miracle. More than anything, this episode is about how a great teacher understands their students emotionally as well as intellectually, and how they use that understanding to not only teach, but to help their students teach themselves. 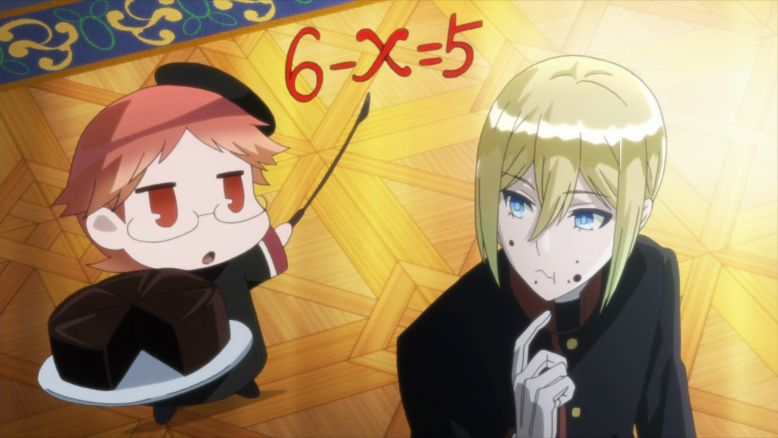 Hmph. And all they gave us in math class were some lousy beans to count.

At first I wondered if the king’s test was for both Leo and Heine, as a way to measure the new tutor’s abilities, but the end of the episode nipped that theory pretty thoroughly in the bud. Turns out Heine and King Viktor don’t just know each other, they seem to be old friends, with (bad) running jokes and a history of drinking parties. They’re even on a first-name basis, which you know has gotta be a rarity for a king nicknamed “The God of War.”

I mentioned in the footnotes last week that The Royal Tutor is quietly very good at world-building, and that continues to hold true, as this week teases out more information about the kingdom as well as our mysterious protagonist. This episode’s plot nuggets include: (1) King Viktor “took the throne” (bit of a vague phrase, that) at the tender age of eighteen; (2) the Glanzreich family’s “current royal line” began in 1620 (based on the clothing and technology, I’d guess we’re in the late 1800s now); and (3) Heine’s past is a taboo topic, and it’s heavily implied he’ll leave the palace if it’s ever made public. 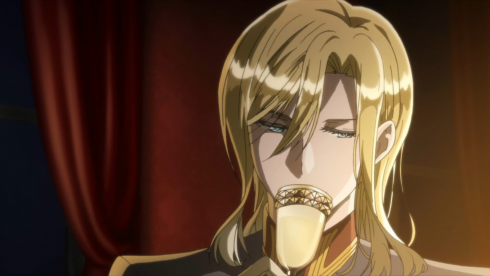 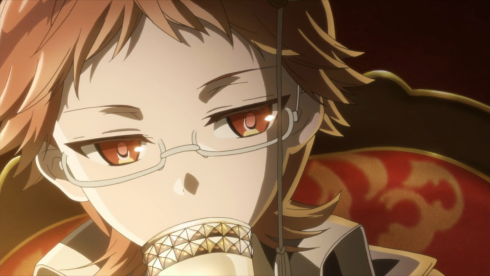 All of this, combined with the unrest and turmoil that preceded Viktor’s rule, Viktor and Heine’s familiarity with one another, and a similar theory floated by a clever commenter last week that got my wheels turning, makes me wonder if Heine is connected to the Glanzreich royal line. Maybe Viktor took the throne from an incompetent older brother or uncle and Heine is of their line; or maybe Viktor’s father was the previous king, and Heine is a half-brother from a commoner mistress.

It would certainly explain why Heine’s determined to keep his past a secret, as well as why he’d be so dedicated to making sure the current royal line is up to snuff. These are all just theories, mind you, and I don’t think any one answer would improve or hurt the story more than any other. I’m still primarily here for the charm and the chuckles. But having a mystery filling at the center of my comedy cupcake is such a pleasant surprise that I can’t help but speculate. Feel free to chime in with your own thoughts in the comments! 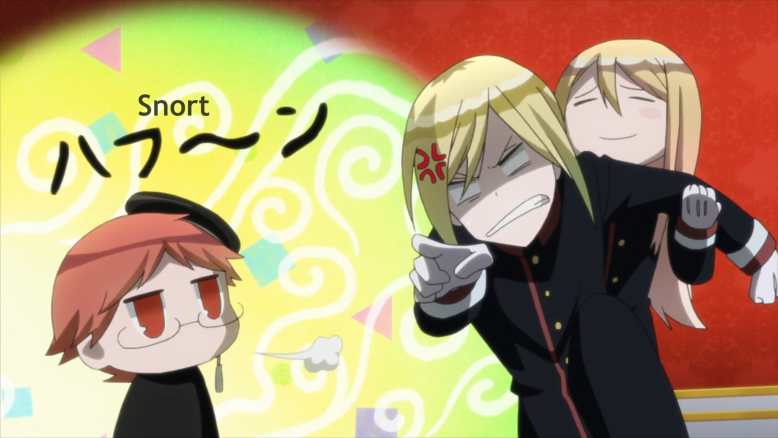 Heine scoffs at my feeble attempts to uncover his past.

In other news, next week looks like it’ll be a Licht episode, and I’m stoked. Leo’s a dear, but we need to spend more time with the other boys to keep the comedy and dynamics fresh. Not to mention Licht is still very much the biggest mystery to me. Finding out more about what makes him tick is sure to be a trip. Secret noble or no, I suspect Heine will yet again have his work cut out for him.