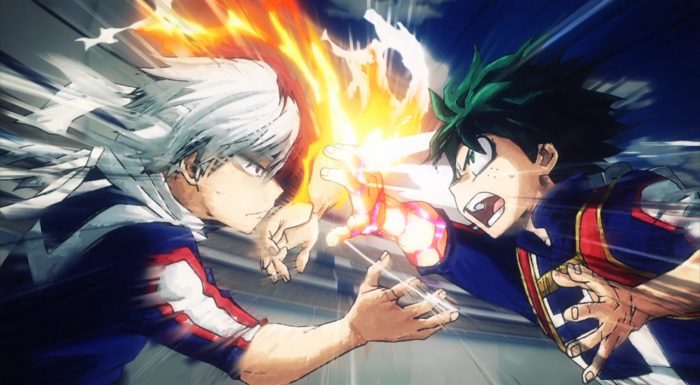 This show yet again gives us an outstanding episode. The finale for the Cavalry Battle was everything I could have hoped to see. There were twists and turns, points going back and forth, and simply a chance made for many characters to stand out. This wasn’t just a chance for Deku to shine as a main character or for Todoroki/Bakugo to shine as rivals. In a sense Iida’s statement was on point, a lot of characters are rivals here. They may never become major rivals, but so many characters wanted to make their mark in this competition. And they should be trying to do that. This event is a huge chance for these kids to appeal to the pros and get attention from people they are going to want to work with in the future. And many did take full advantage of this opportunity. 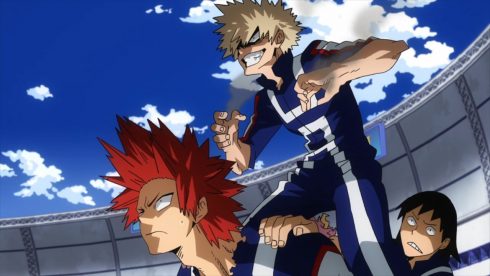 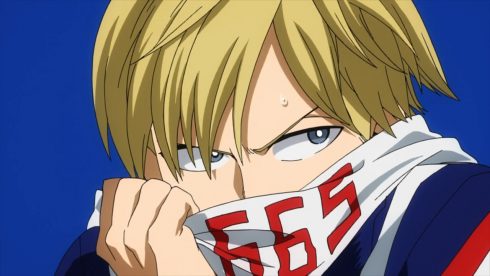 In the end at least Monoma made some kind of impact in this match. The biggest consequence of Monoma’s actions was that he basically kept Bakugo busy. Doing so prevented an insane team clash between Deku, Todoroki, and Bakugo. His plan had some logical sense to it and I can understand being pissed about Class A standing out. But all he proved was why Class A got all the attention going into this. His plotting only ended up with him and his teammates missing out. They failed to make an impact in the first game and failed to pull through in the second event. There is a difference between him and Bakugo. That guy was constantly trying to game the system. He was a bit bothered moving up to 2nd probably since that would make him a bigger target.

Bakugo? He always wants to be #1. He has that will to be the best that not everyone has. Now you can list his flaws until the end of time. The guy can be a bully, selfish, ignorant of people who don’t interest him, short tempered, etc. One thing Baku isn’t is stupid. We saw it in season 1 when he clashed with Deku during that one class. While he can get pissed off easily, he is very dangerous when that happens. His natural combat skills can be clever and overwhelming. Class B took him lightly. They figured if they showed off their skills and pissed him off enough he’d be easy enough to control. That was an error in judgment. In the end Bakugo took everything from them and then moved onto his main goal. Despite his flaws he is certainly an impressive character. 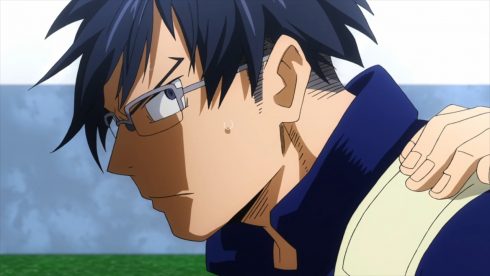 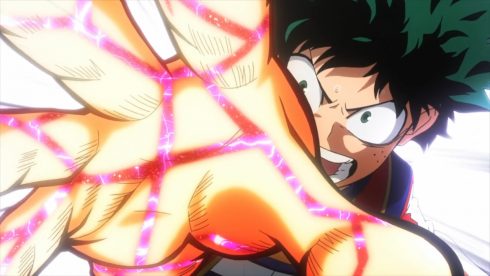 This episode had a lot of fun things going on. It was great to see guys step up who weren’t the riders of their group. Iida pulled off an amazing move that did get his team first place. Sure, they had to hold onto the points after that point but he got them 10 million points in one go. It was a great way to show how everyone is a rival here. Of course it wasn’t just Iida who had a moment of glory. Tokoyami was the big hero and the reason that Deku and company were able to move forward and grab that fourth spot. Of course it was a big gamble; they could have also easily swung into first place with that move or maybe not gotten enough points. It depends on the specific headbands that Todoroki was carrying.

Still the head to head matchup of Deku vs Todoroki was a good one. He created such pressure in his attack that even Todoroki had to take him seriously. He baited out the use of the flames that he had declared to himself and his team that he wouldn’t use. His refusal to use those flames allowed Deku to hold onto the first place points for even longer. After all Deku is smart and if Todoroki is refusing to use his flames then he would notice. It was a nice move as well to simply use his power to push away Todoroki’s arm and thus be able to go for the headband. Deku also wants to be at the top and he showed that in this episode. 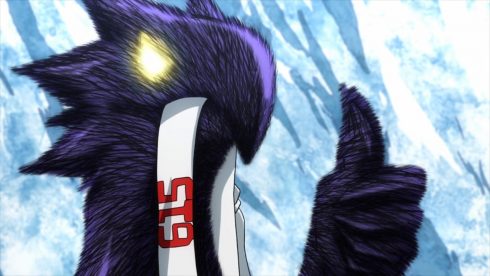 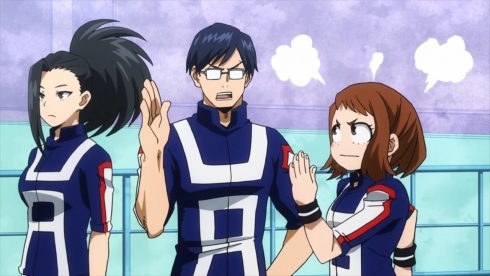 Of course can’t forget the tenacity and determination Ochaco showed in this competition. She wants to be a pro as well; though she may always reflect that in a semi-adorable way. It was fun watching her in a silly way go after Iida for the move he’d been hiding this whole time. You can never really tell how upset she is XD. In the end she was an important part of that team and gets to move on with her allies.

One thing I did find interesting was the extra information about Tokoyami’s quirk. It is certainly an interesting power in how it gets more powerful at night, but is much harder to control. The offer from Deku was one he couldn’t help but go for. The attacking power of Dark Shadow may drop during the day, but it is easily controlled. Thus it was the perfect fit for Deku’s intended defensive strategy while the offensive type might have been more appealing for an attacking team if the event happened at night. It’s a tricky thing since the control level drops at night so some people might not want to team up with such an unstable power. 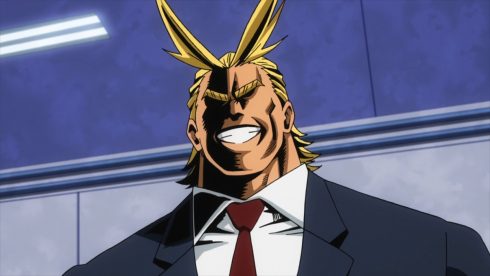 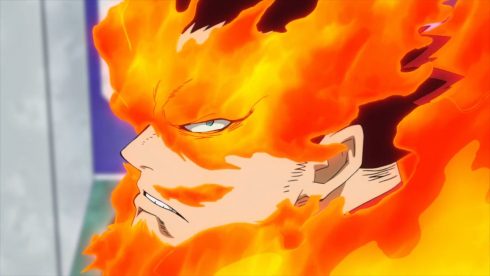 Just in the end this episode was a ton of fun to watch. It ended up pretty back and forth at times and the end result was often in the air. I’m glad of course Deku and company hung on and moved forward. It is frustrating for them that they couldn’t hold onto first place, but they handled that responsibility well. Being on top is tough and sometimes you can’t easily hold onto the spot. It is just something Deku will continually face going forward and is something he’ll get better at when he can really control One for All better. I’m excited to see where things will go next. We get another confrontation between Deku and Todoroki, but also an encounter between All Might and Endeavor. Both should be interesting in their own ways.