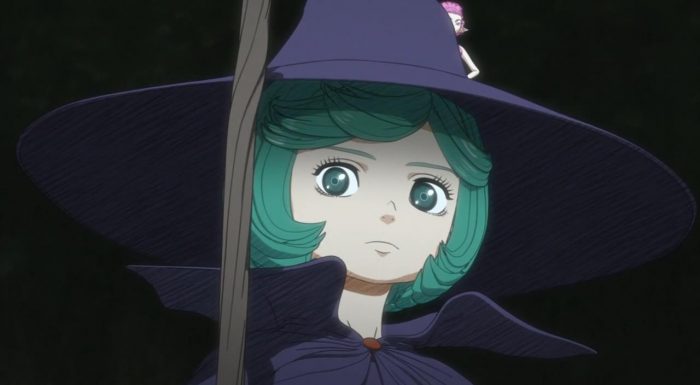 This week takes us back to Gutts’ story, and while its a slow episode, I’d venture to say that its still a better and more engaging story than what we got last week. This week is more or less an introductory episode for none other than Schierke, a little girl that’s going to become one of the mainstays of Gutts group for the foreseeable future.

Its worth noting that there’s an interesting bit of fantasy that’s trickling into the Berserk world as of late. I remember this part distinctly in the manga as well, but it was here that I feel like Berserk truly made the transition from dark monster based fantasy, to something that’s still dark, but feels more like a traditional fantasy world. We’ve got witches, elves, trolls, elemental Golems and even magic making their debut this week. 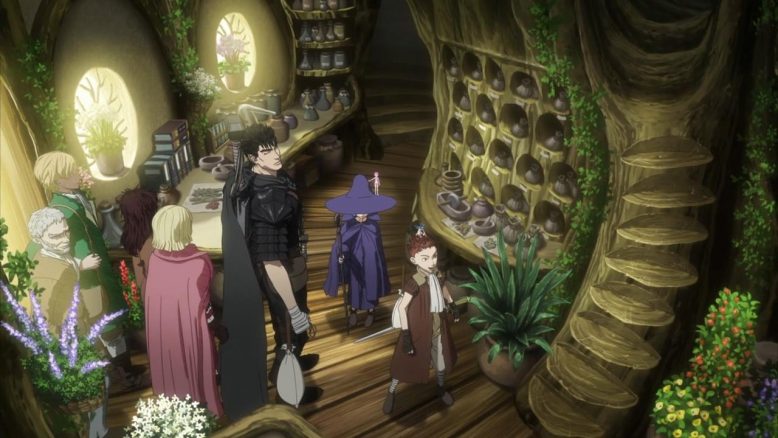 This particular aspect of Berserk’s world that we see now, feels like it starkly contrasts to the Golden Age Arc (That’s shown in the first series and the two movies preceding the TV series). The golden Age arc was more or less a straight up medievil world. There were inklings of some other worldly creatures, but the story was largely surrounding man and what people did to one another. I’d almost go as far as to say that Berserk’s Golden Age Arc felt a more grounded.

With the two series and what I like to call the Black Swordsman era, things definitely get a lot more fantastical. I’m not entirely sure if that’s better or worse than what was there before, but its certainly different. There are different stakes now, different characters, and different dynamics that we’re seeing play out. 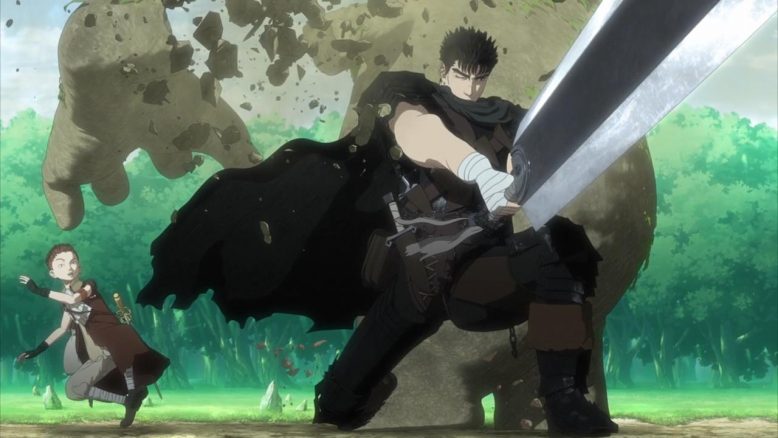 Its not just the world itself either, but the tone of the show is shifting ever so slightly as well. After the last few arcs of some really dark and gruesome stuff, I feel like The whole Spirit Tree and Schierke represent a respite from all the doom and gloom. The art direction is changing from its dark collections of dim lit  environments featuring dark blues, reds and yellows to bright greens, azure skies and brightly lit spaces featured in the day rather than the night. It all lends to the idea that there is still beauty and tranquilly in the world of Berserk, and its not all just a representation of a living hell on earth. There are spots and pockets of safety here and there, and its just nice to see Gutts and co actually find one of them, after all the trouble they’ve been dealing with. 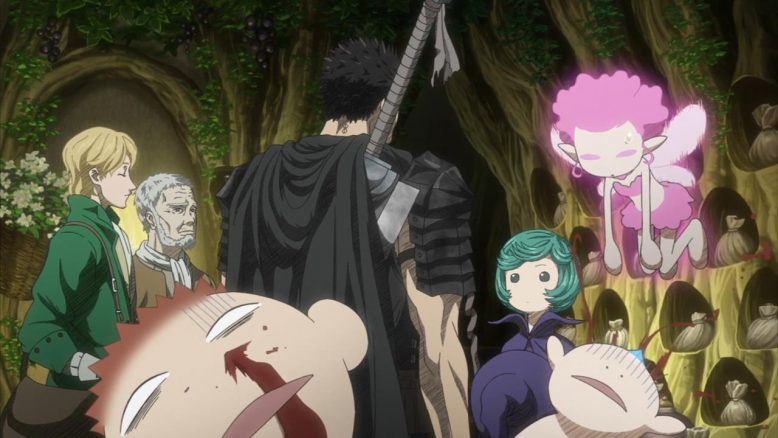 And while Schierke is definitely the main attraction of this week’s episode, there’s a little bit of development that happens with Ishidoro and Farnese as well. Both are changing, and you can definitely say, for the better.

Ishidoro is clearly getting stronger and absorbing a lot of knowledge from Gutts as he trains with him. Gutts, for all his gruff and anger, is actually a pretty smart and capable teacher. Gutts does what very few teachers seem to, he sees Ishidoro’s strengths and has him use those to improve himself, rather than teach him a different way that just isn’t suited for him. 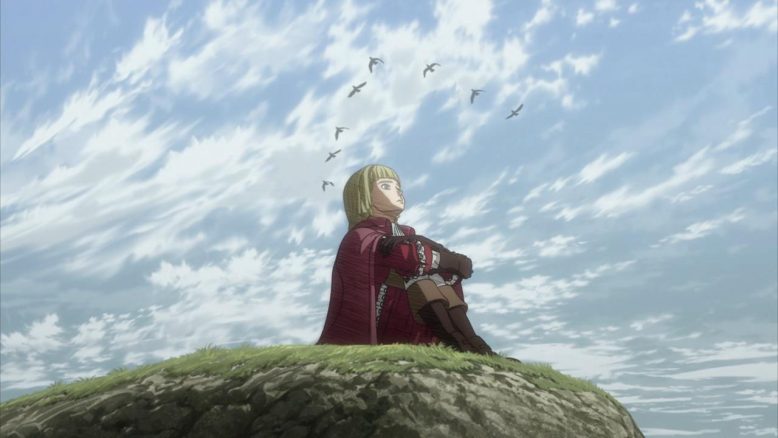 Farnese, on the other hand, is changing rather radically. The anime isn’t quite nailing Farnese’s transformation, but its definitely getting close. At this point, what we’re supposed to be seeing is Farnese “waking up” and really starting to understand what kind of twisted and dark human being she’s been until now. There’s a sense of despair as Farnese is starting to piece things together, but I feel like her guilt and pain isn’t deep enough, as we see it now.

Farnese is concerned about how useless she is, and that IS a problem, but I don’t think its the problem that she has to grapple with. Her primary issue is how much evil she’s done in her life thus far, and facing all of THAT, is where the real challenge lies. Baby steps though I guess, and if nothing else, Farnese is definitely making strides towards to her eventual self realization. She’s definitely a far cry from the character she was a season ago. 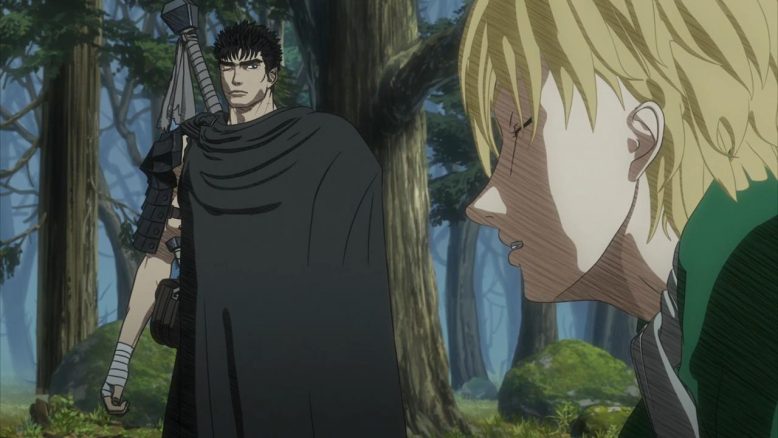 And what’s most interesting, at least to me, is how unsettled Serpico is by Farnese’s change. He’s not really sure what to make of it, and it seems like he’s still trying to come to grips with what it, and Gutts mean to the woman he clearly cares for. Gutts has been a positive influence, and has changed Farnese’s world, but he’s also a constant source of danger, and one that continues to expose everyone around him to more and more danger.

The little talk that Serpico and Gutts have, is the most passive aggressive thing I’ve ever seen. Gutts refuses to play along with Serpico’s game, so the guy just oscillates from one nice extreme to the other more angry one. 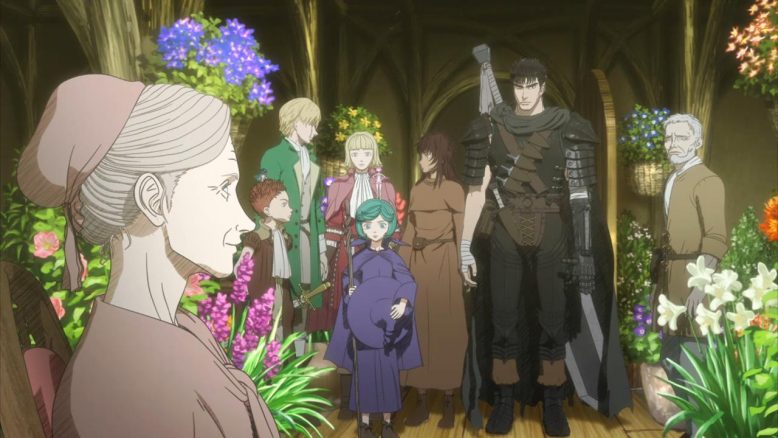 But I think what this episode highlights, beyond the legends of Trolls and witches, is that there’s a real variation of dynamic between all the characters in the Gutts part of the story. I find it all quite interesting, even as I see it all play out a second time. Which, is a win, I think, for this latest anime adaptation of the franchise.

Of course, there’s also a little uptick in the story aspect of it all too. See, with Griffith coming back into the fray, we kind of lost an antagonist and a central theme for the story. Gutts wanted to hunt down and take down Griffith, and to do that, he was facing off against the Apostles. But with that all said and done now, there’s not really a lot beyond Gutts’s desire to place Casca in a safe space. 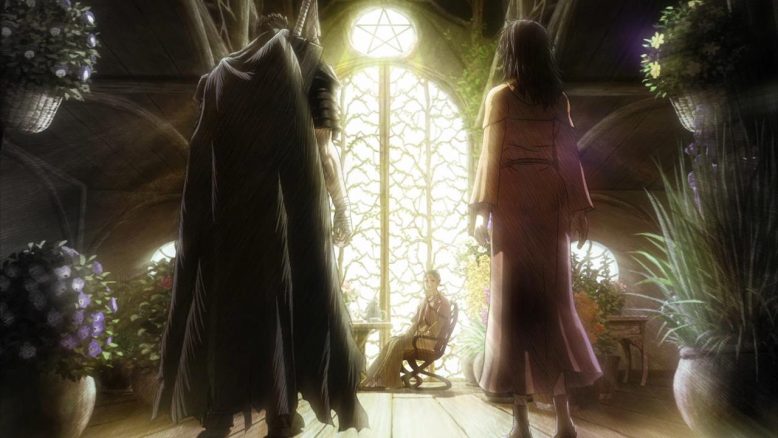 So now that we have this “Mahjou” (Witch) that seems to know about The Brand that both Gutts and Casca carry, and not only that, we learn that she’s been waiting for them… Now, there’s a renewed sense of mystery, and with that, the potential for this story to go in some kind of interesting direction. And that, is I really do think, a great place to end an episode, and build anticipation for the next.