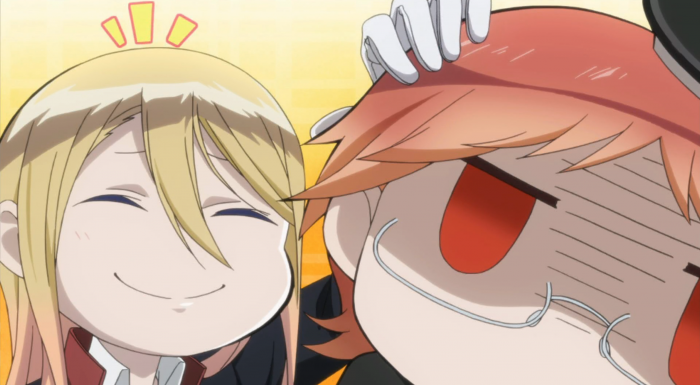 From a bouquet of impressive sequels and promising new series, I have plucked a silly, warmhearted comedy about teachers, students, and the gap between appearances and reality. With its deadpan protagonist, offbeat humor, and bursts of compassionate cuteness, it’s already setting itself up to be “that one show I won’t shut up about because no one else is mentioning it” (see: ClassicaLoid, Tanaka-kun is Always Listless). So as long as I’m gonna be squeeing about it, I might as well do it in weekly blog form, right? (Hey, it can’t all be analysis-heavy rakugo performers, magical girls, and gangsters, y’know! Sometimes a gal’s gotta giggle about her precious trash boys, too.)

In brief, The Royal Tutor is about Heine Wittgenstein, a pint-sized tutor who takes on the task of instructing the four youngest princes of the kingdom, none of whom seem willing to accept him as their teacher. It’s a straightforward premise that lends itself well to a comedy, as there are plenty of character combinations you can get out of a core cast of five, plus the merging of school story with historical fantasy gives them a variety of options for future narratives and/or gags. It’s produced by studio Bridge (yeah, I hadn’t heard of them either) and is very minimally animated thus far (already we’re seeing some corner-cutting and off-model moments), but it makes up for it with solid storyboarding, a strong comedic rhythm thanks in large part to its voice actors, and my personal weakness: chibis. Chibis everywhere. 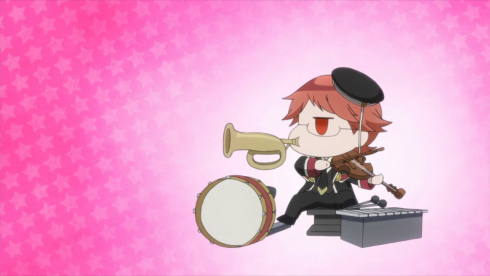 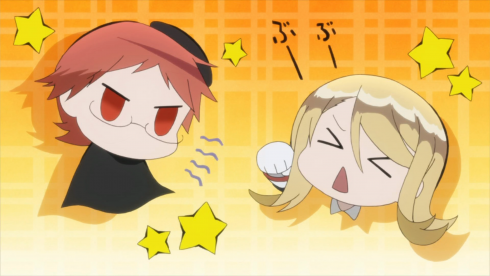 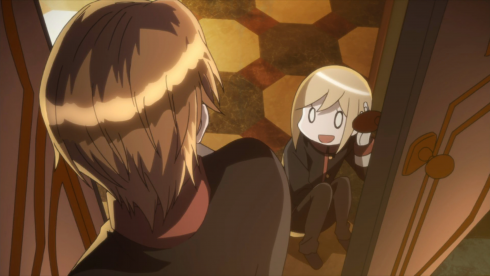 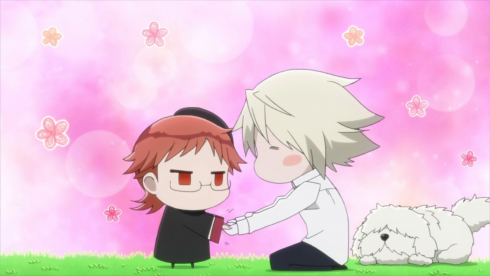 In the premiere review I wrote for AniFem (I’m writin’ all over these Interwebs!), I likened The Royal Tutor to a “cute girls behaving badly” show, but I may have spoken too soon. While it definitely has some good good trash boys in it, there’s a lot of variety between the four princes. On the spectrum from “cinnamon roll” to “garbage child,” they occupy four main points along it, which helps set each character apart, keep their interactions with each other and Heine fresh, and promises distinct roads of development for each of them going forward.

A sitcom is only as strong as its characters, so while there are definitely some bigger ideas and stories floating around the edges of The Royal Tutor, I figured we’d spend this opening post getting to know the cast. We’ll have plenty time to talk about all that other stuff in later weeks. For now: introductions, starting with our princely kids! 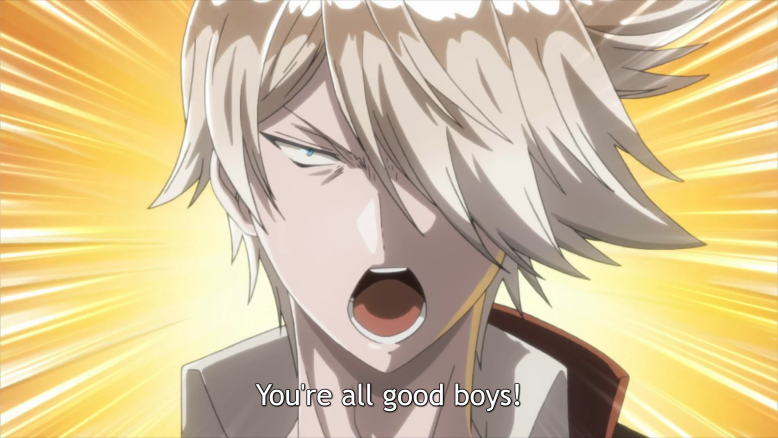 We haven’t actually met Prince #1 yet, so we’ll be starting with Prince #2: 17-year-old Kai. He’s assumed to be violent because of his naturally sharp eyes and difficulty communicating, but he’s actually the family peacemaker who enjoys naps in the garden and squishing the paw pads of dogs and people alike. He likes to break up fights between his brothers by reminding them that they’re “good boys,” which is pretty much how I feel every second I’m watching this series, so the two of us are already on the same page. Kai has the most amicable relationship with Heine, which would be boring if it weren’t so darn cute.

Prince #3 is 16-year-old Bruno, the intellectual and perfectionist, so competitive that he strives to be the best in everything he attempts, whether that’s academics, chess, or music. He’s extremely hashtag relatable, to tell the truth. At first he’s the most hostile towards Heine because he’s never had a tutor who could challenge him, but once he realizes that Heine’s not only more knowledgeable, but can also support him and help him improve, he turns into a big ol’ puppy dog, enthusiastically referring to Heine as his “master” (shishou). Heine wonders if Bruno may be the most high-maintenance of them all. 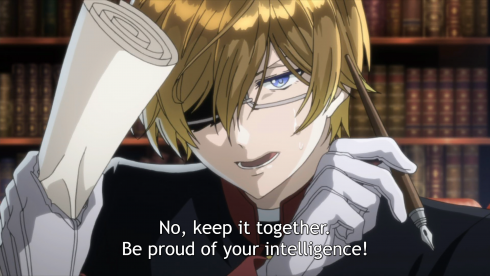 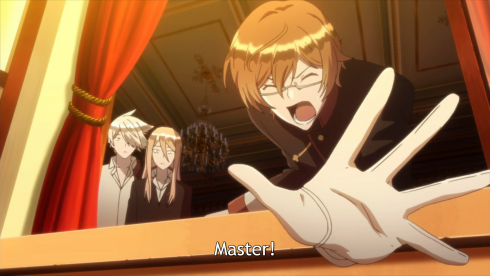 On to Prince #4, 15-year-old Leonhard (or “Leo”). He gets the most focus in these three episodes, as he hates studying and actively resists Heine for much longer than the other brothers. We come to find out that a lot of this stems from his first tutor, who degraded and abused him just because he didn’t learn as quickly as his siblings (when it came to academics, anyway; he’s a gifted athlete and outdoorsman), and he came to believe he was stupid and stopped trying altogether.

Leo is basically a triple-layer sachertorte: Haughty pride covering childish impulses covering deep-seated insecurities and self-reproach. He’s the good good trash boy, simultaneously the most immature and most self-aware of the princes, which makes him a complex, well-realized character right out of the gate. It also makes his interactions with Heine particularly dynamic, as our unflappable tutor is adept at both provoking and encouraging Leo, leading to giggles and growth alike. 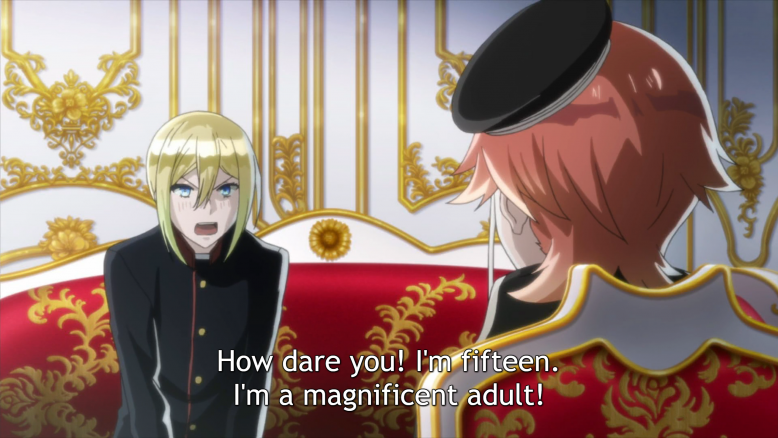 We also spend a fair bit of time with Prince #5, the 14-year-old Licht, easily the most threatening character in terms of challenging Heine’s position as tutor. He plays the airheaded flirt, but it’s largely a ruse, as he demonstrates moments of aggressive cunning when he questions Heine’s background and wonders exactly how much power an unknown tutor truly has over a prince.

He’s also the closest thing to a truly mean-spirited character in the cast, seeking to belittle Heine by asking intrusive questions about his body and treating him like a child instead of a teacher. Heine knows what he’s doing and fights back as aggressively as he dares, given their social positions. Licht and Heine are in a kind of silent showdown, best demonstrated by Episode 3’s ongoing Shoulder Duel, which (in addition to being understated comedy gold) creates genuine tension in a largely feel-good series. Licht is the only character I actively dislike, but I can’t deny he makes for a fascinating antagonist. 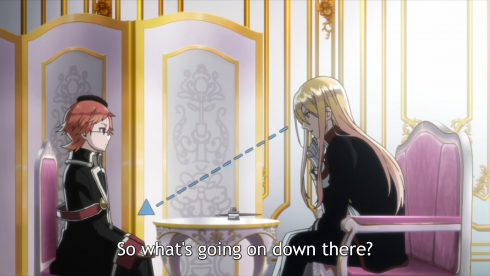 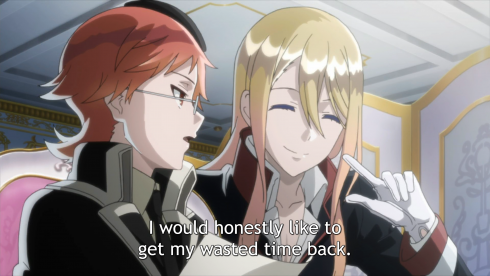 Which brings us to Heine Wittgenstein, the royal tutor himself!  The anime made a brilliant decision casting an adult man (relative unknown Ueda Keisuke) to voice him, as his level-headed deadpan contrasts nicely (and often hilariously) with both his childlike appearance and the more excitable performances of the princes. He really does feel like a young man surrounded by teens, shifting between strained patience and open exasperation at the headache these kids are giving him.

Heine is sharp both intellectually and emotionally, able to get a grasp on other people’s personalities fairly quickly and then adjust his own behavior to better match their needs as his students. He’s not infallible, but he recognizes his mistakes quickly and works to correct them. The series presents him as an exceptional teacher, and it’s hard to argue with that so far. That said, he isn’t exactly an old man himself, and his periodic bursts of temperamental immaturity–particularly around people calling him “little” or treating him like a child–help to humanize him, reminding us that he’s not as unflappable as he acts. 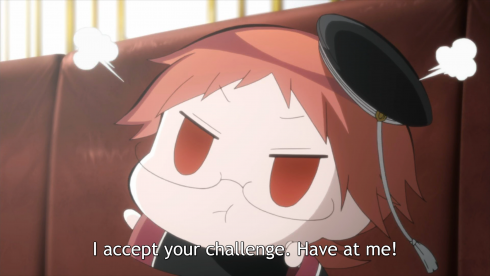 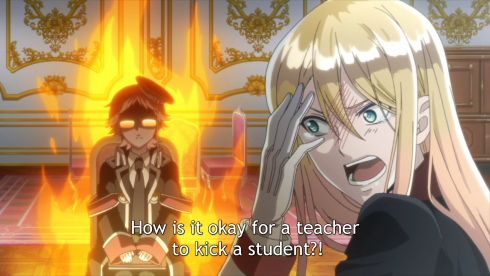 Maybe most importantly to the story at large, Heine is keenly aware of his social station. He’s a commoner with no formal university education, which means he has no real authority over the princes beyond the fact that their father hired him. He can’t just expect them to listen to him; he has to earn it by being someone they want to work with and learn from. He’s willing to go to great lengths to make that happen, up to and including tackling princes off horses and into a conveniently placed shrubbery.

He also has to be careful about how he treats them and how he much he lets them get away with. As he says in Episode 3, he’ll accept them speaking informally to him because he’s of a lower social status than they are, but he refuses to let them treat him like their friend because he is still their teacher (hence his hostility towards Licht, who constantly presses on those boundaries). Heine has to show respect for their position while also demanding respect for his own, and between his appearance and his status it’s a constant uphill battle. 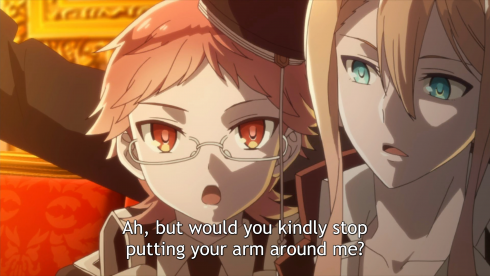 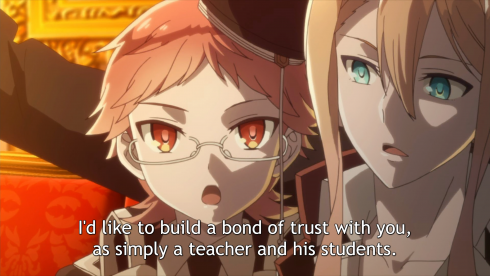 “Contrasts” are a central element of The Royal Tutor, and the contrast between “commoner-teacher” and “royal-student” forms the center of much of its conflicts so far. It’s an understated fight, but one with a lot of room to grow. I’ll be curious to see how this comedy explores those struggles, along with developing its immensely likable characters (and making me chuckle a whole lot) in the coming weeks.