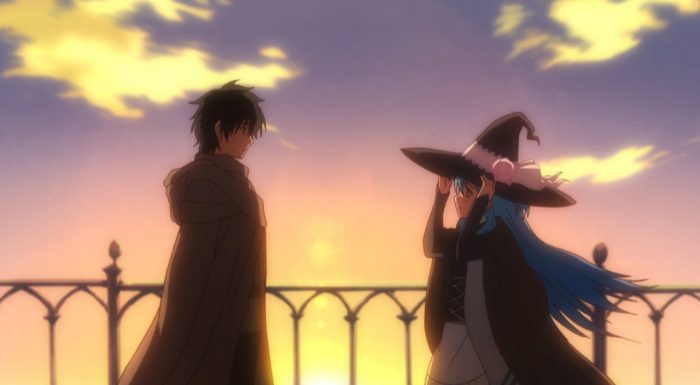 One of the series that snuck up and blindsided me shortly after I finished writing up my Spring 2017 Preview post was the one we are now considering, and the means by which it haymakered me was via a preview clip of one if its’ insert songs. Before that preview, about a month or so ago, I was saying things like “I have been getting sleeper vibes from this series ever since it was first announced for some reason, but sleeper vibes in terms of my liking it, not sure about a more “objective greatness” factor.” Well let me tell you, I tell you the truth that it I was so moved by that preview I immediately picked up some fan translations of the novels and looked more closely at the series to come and began looking more closely at other snippets of the series. And after episode one, yes: this series shows REAL promise. If I had not already committed to blogging Alice to Zouroku this season I would snap this up in a heartbeat! Now where can I begin to somehow convey how beautiful this series’ premier episode was for me? 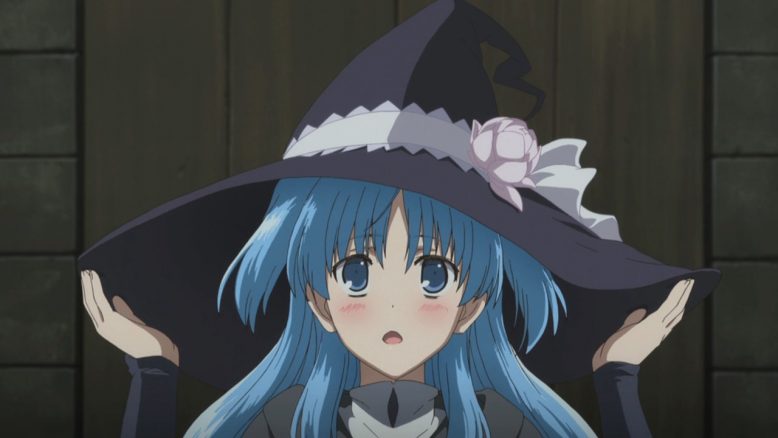 Perhaps one of the most unfortunate things about this series early on regarding convincing folks to watch it has been the summaries. They … really said very little about what the series is actually about. The official site, though, has a summary of the story which shows up as background text in one of their previews for the series: “I am now lending a helping hand for the girls’ ending. This is an ephemeral and wistful story of girls called ‘fairy weapons’ and a surviving ‘quasi-brave.’ In the world after the land is trampled down by unidentified monsters ‘beasts’ and many tribes including human beings are destroyed, the tribes who have barely survived leave the land and are living in the flying archipelago called ‘regles aile’. Willem Kmetsch, waking up in the sky 500 years later, has lived like a hermit in despair, because he could not protect what he wanted to, or even worse, has survived alone when all others died. In the meantime, he encounters some girls through the job of weapon maintenance that he has started unexpectedly. Chtholly-Nota-Seniorious is one of the fairy soldiers, a girl who can wield the strongest holy sword. In return, she is eventually doomed to lose her life. Having accepted such a fate, she starts to change her mind by encountering and becoming attracted to a young man Willem Kmetsch. Nevertheless, she leaves for the battlefield, which is heart wrenching. What kind of ending will be waiting for this strong, but fragile ‘end of the world heroine?’ Would it be alright if I wished to stay alive? Would it be really alright if I had such a dream?“ 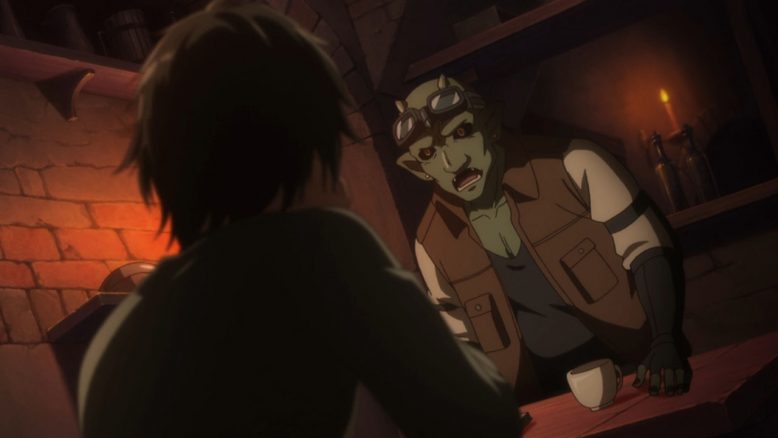 One of the undoubted strongest parts of the series for me has been the soundtrack. Holy smokes – the insert songs thus far are … deadly beautiful. No, seriously. They really are brilliantly chosen and perfectly capture the essence of the story as a whole. I will give you two links here; the first is the link for the preview that blew me out of the water: https://youtu.be/ZGfC2boki-I. The song sung there is called “Always in my heart”. And here is the second preview link: https://www.youtube.com/watch?v=t4OwyezkAw4. That song, of course, is a cover of the old British folk song “Scarborough Fair” (popularized in the 60’s by Simon & Garfunkel). Just … magnificent. Interestingly both songs are sung by the same performer: Yamada Tamaru. Viewers will also notice that Satellite studio has sprinkled in other British Isles folk music elements throughout the first episode, and in effective ways (for those who remember that studio was also successful in using these elements in their anime Bodacious Space Pirates – another series by them I enjoyed quite a bit). 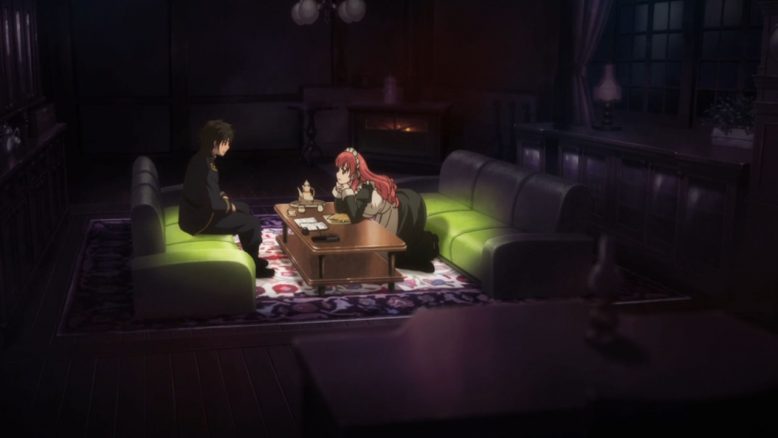 It is not just the audio elements of the series that stand out, however. The visuals are also … really, really good. Satellite studio every once in a while really brings a first class art department to their works, and this is definitely one of them in my opinion. The art of the character designs (and there are already quite a few of them!), the backgrounds, the building interiors, the “inner depths of a densely populated city”, and especially the floating islands and landscapes of this odd post-apocalyptic setting (and the lighting! wooooow….) that blends both fantasy and science fiction settings is … all of it is woven together into a set of visuals and animation that really hits the ball out of the park and pulls the viewers immediately into the story. The visuals really bring smething to life about the series immediately, and that is that while this light novel series is highly regarded by many it is one of the few that does not have a lot of themes one associates (deprecatingly, and rightly so) with that medium. In other words, this series has little to no action, ecchi or harem related content, and no school life elements. And that makes me fervently hope that it somehow “catches” with contemporary audiences (so far the reaction, while on the modest side seems generally positive). 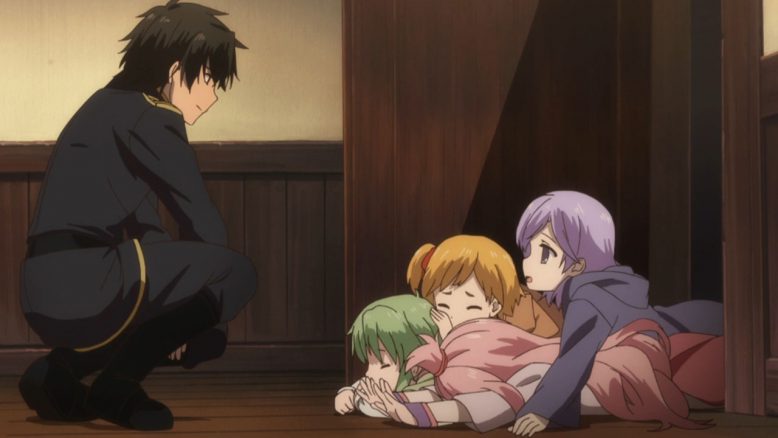 More about the story of this light novel series then. The focus of things is primarily around an older young man who has been through very difficult experiences who sees a handful of children being treated and trained (from their earliest years, too) as inanimate weapons to be used to the maximum possible extent and then tossed away when their usefulness has come to an end. The children take up their task knowing that they will someday die, and likely rather soon. The main character, who was once both a soldier and lived and helped manage an orphanage a long time ago, tries to help humanize his new charges, and cultivate a sense of valuing and appreciating the life they have. And unsurprisingly many characters really get under one’s skin and endear themselves to you. However, do not be fooled by this description – yes, there are definitely happy moments, but this is a sad story, and by sad I mean vaguely in the vein of the old Ghibli movie Grave of the Fireflies as opposed to “grimdark”. The opening moments of the first episode make all this abundantly clear, and I can easily see this series could have the potential to be very strong and moving if it is handled well. 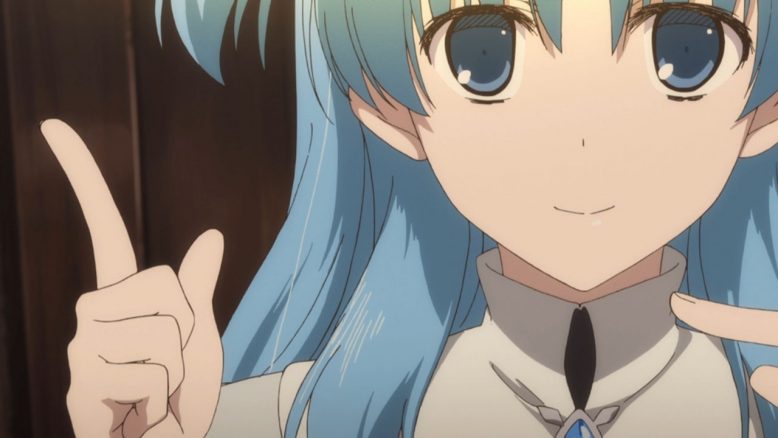 Did I mention the full title of this series, by the way? It is one of the longer titles: Shumatsu Nani Shitemasu ka? Isogashii Desu ka? Sukutte Moratte Ii Desu ka? This means something approximating to: “What do you do at the end of the world? Are you busy? Will you save us?”. The shorthand slang for the series is simply “SukaSuka”.  Anyhoo, if I were to give the first episode a rating it would probably be a B+ or so, but with the qualification that it could get even better – the source novels have a lot of quite good content, and if Satellite studio can continue to draw out and build upon the ambience and world building it has woven together thus far this one cour series could just be one of the better series this season, I think! The last time I tried to blog two series at a time during a season I nearly imploded, but at the very least if the series continues to be as good as the first episode it’s a good bet that it will get a review. ^^